The latest research progress of forest economics and analysis: Based on the review and analysis of studies in the two international authoritative journals

This paper analyzes the latest research development and contents by the means of cluster analysis and variance analysis.
Cluster analysis, a multivariate statistical technique to classify samples or indicators, is consisted of hierarchical clustering and K-Means clustering (quick clustering). Hierarchical clustering attempts to identify relatively homogeneous groups of cases (or variables) based on selected characteristics, using an algorithm that starts with each case (or variable) in a separate cluster and combines clusters until only one is left. K-Means clustering can handle large numbers of cases based on selected characteristics into k homogeneous groups. Its clustering is faster compared with the hierarchical clustering. Specifically, in this study hierarchical clustering was mainly used, and Between-groups Linkage was used in cluster method. When measuring the distance of cases (or variables), the Squared Euclidean Distance was also used.
ANOVA, short for analysis of variance, is a statistical technique for studying the observed variability characteristics of variables and independent variables. The variability is reflected through the significance testing of the mean difference of two or more samples. In the research, the differences between different research contents were analyzed to summarize the up-to-date research trends and the main research contents of forest economics. Specifically, ANOVA was used showing that different clusters do differ and gives information on each variable's contribution to the separation of the groups.
Research data
A total of 685 research articles and critiques in the two main international authoritative journals from 2010 to 2014 were collected to make a base for this study.
As the recognized authoritative academic forest economics and policies journals in the world, Journal of Forest Economics and Forest Policy and Economics mainly publish stringent standards of research articles of forestry economy and policy reviewed anonymously by peers. Social sciences and humanities related research papers that would have an impact on forest economy can also be published in the two journals; but these papers must have specific theories, conception and methods. So far the two journals are indexed in SCI, SSCI, EI, etc. In 2014, the impact factor of Journal of Forest Economics is 1.143 and 1.488 for five consecutive years (Journal of Forest Economics, 2015). While the impact factor of Forest Policy and Economics is 1.856 and 2.129 for five consecutive years (Forest Policy and Economics, 2015).
First of all, main research contents of the 685 articles of the two journals in 2010 to 2014 were extracted through “look up” and “select” tool in EXCEL of Microsoft Office and classified into groups. Secondly, the number of articles of different groups was counted, respectively, so was the percentage of total articles. The top 10 studied contents of articles in the two journals were sum up and the rest of the articles were all put into the group of “others”. The statistics of the articles published in the Journal of Forest Economics and Forest Policy and Economics in 2010-2014 is shown in Tables 1 and 2. 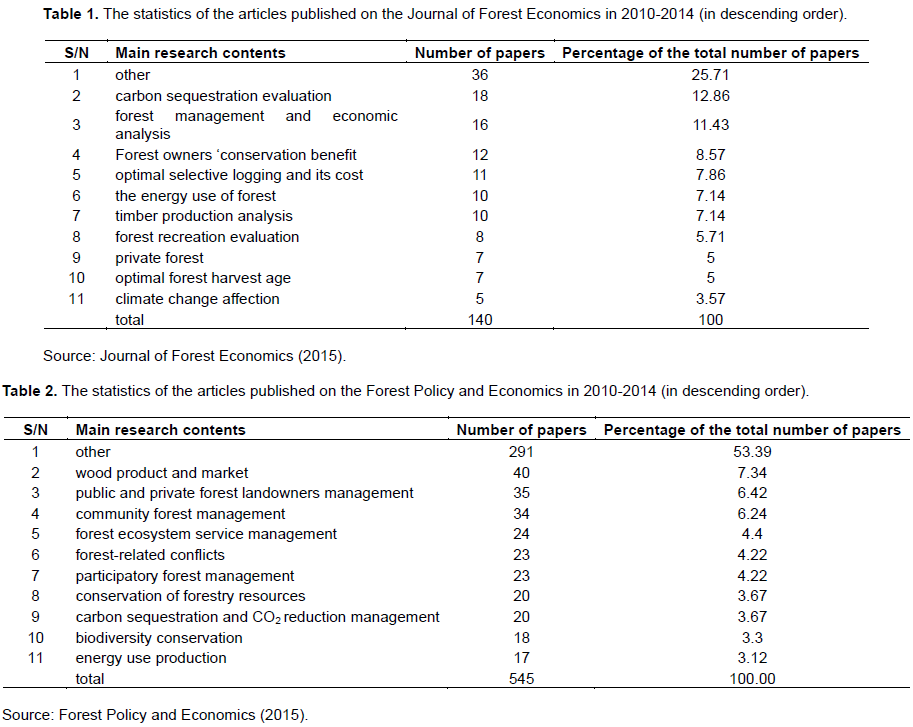 According to the statistics in Tables 1 and 2, Table 3 shows the top 10 study contents between 2010 and 2014 on the basis of the percentage of the total number of paper for the different study contents.

As is shown in Table 3, carbon sequestration evaluation stands first with 12.86%; 11.43% of the total number of papers, which ranks second, study the forest management and economic analysis; fewer papers cover the content of forest recreation evaluation with 5.71%.
Cluster analysis has been used in the study of the 10 research contents for finding out the latest research progress and the main research contents. Firstly, the ten research contents can be clustered into 4 groups by quick clustering. This procedure attempts to identify relatively homogeneous groups of research contents based on the ranks and the percentage of the total number of papers; the statistics of initial cluster centers for 4 clusters are shown in Table 4. Here, the method is iterated and classified, convergence criterion is 0, maximum iterations is 10, and the Euclidean distance between the case and the cluster center used to classify the case. The iteration history of quick cluster is shown in Table 5. Secondly, under the hierarchical clustering, the tree diagram of hierarchical clustering is as shown in Figure 1. 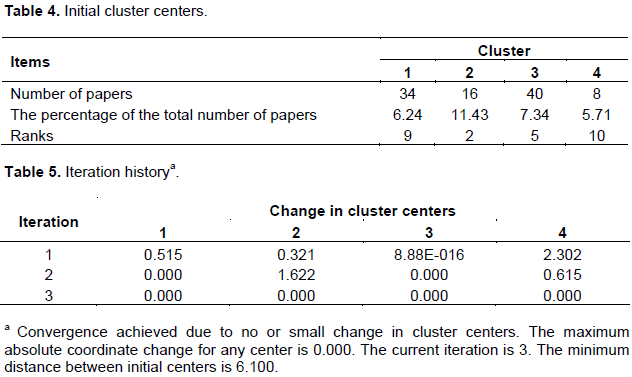 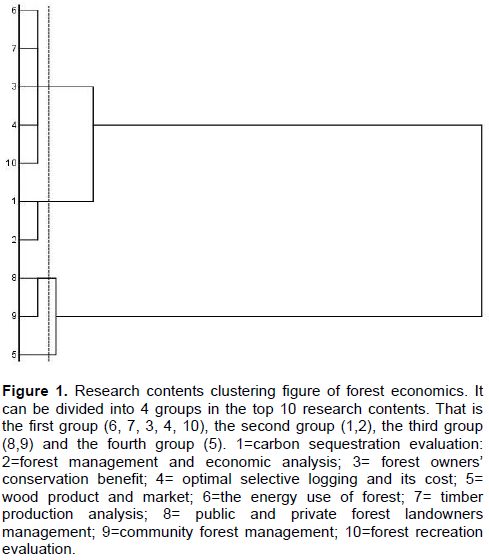 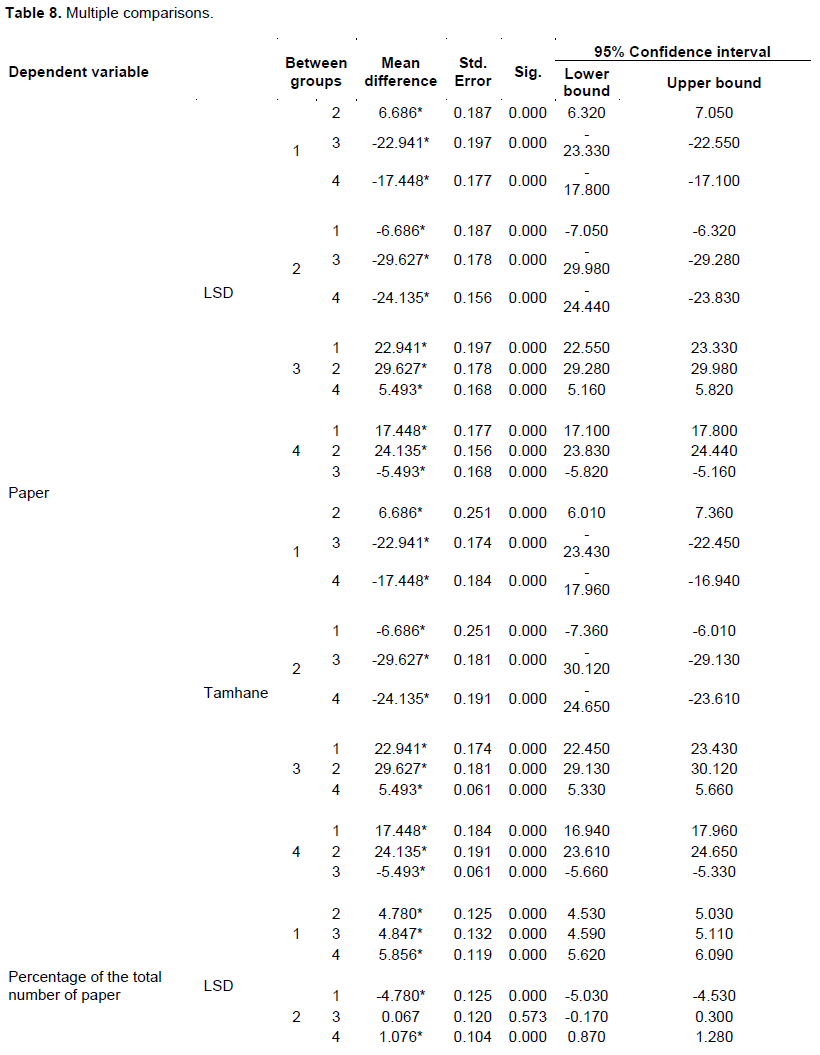 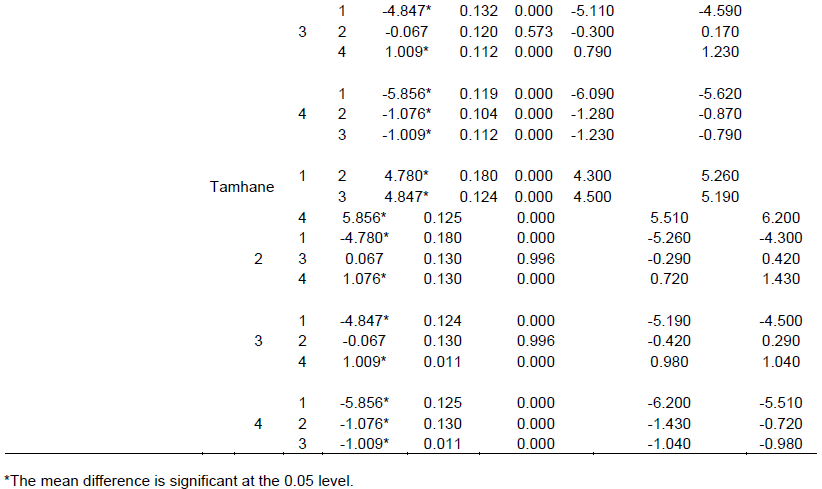 The research of the forest  economy  has  made   great progress in term of the scope since Faustmann model was put forward in 1849 (Deegen and Seegers, 2011). However, seen from the research results, the latest progress and research contents focus on the studies of the utilization and returns of forests, the forest management, forest economic analysis, timber production, and timber market. Though the research depends mainly on the articles published on the two international authoritative journals in 2010 to 2014, and it may come to a situation that the contracted contents could not exactly or absolutely reflect the true and whole contents of these articles, or a situation that the research may have done a rough classification, the research results will be greatly helpful and have some reference meaning to such relative studies on forest economy.
With the introduction of the new schools of economic theories and the new technical means, the research contents of forest economy expand unceasingly. All of these have become a trend for forestry research. Besides, the study of new problems and application of multi-disciplines have also become the research directions for forest economy. Hence, it is of great importance for the building of theoretical system of forest economics that forest economic research should not only pay attention to the application of new theories and multiple disciplines, but also should give high priority to the new techniques in solving economic problems of forestry.
Research of the forest economy has a long history (Liu et al., 2008). From the study of wood cutting the reform of forestry rights and the forestry output value calculation to the study of the evaluation of forest ecosystem services at the moment, the world’s forest economic researches have always been influenced by the different government’s policies and strongly linked with the different government’s policies in different periods (Tian, 2013; Zhang, 2014). On the one hand, this will be conducive to solve the practical problems in different developing  periods  in  different  countries;  on  the  other hand, this will be against the shaping and development of the theoretical system of forest economy. Therefore, it is imminent to build the theoretical system of forest economics based on the research problems in this field.