Roots are essential to plants and can be the focus for yield improvement in the environment the plant grows. The objectives of this study were to evaluate some yield components and root traits in cowpea (Vigna unguiculata (L) Walp) and establish the linear association between the yield and root traits to explore improvement potentials of the crop in humid ecosystem. Ten cowpea accessions were tested in Calabar, Nigeria with humid tropical rainforest ecology. The accessions were grown in perforated polyethylene pipes arranged in completely randomized design, in five replications and on the field arranged in a randomized complete block design, in three replications. TVu-215 had longest roots, heaviest root biomass and largest root volume. TVu-10983, TVu-1515 and TVu-7906 also had long roots. TVu-7857, TVu-1130, TVu-1131, TVu-215 and TVu-1515 had the greatest root density. With respect to yield traits, TVu-1131 and TVu-16196 had the highest yield per hectare; TVu-7857 also had high yield per hectare. Root traits did not significantly correlate with most of the yield traits, but there was significant negative moderate correlation (-0.51) between root volume and number of pods per plant. Root of cowpea does not require much robustness in humid ecology to absorb water and nutrient, which accounts for the non-significant correlation between root system and yield traits in the environment. TVu-16196, TVu-1130, TVu-1131, TVu-215, TVu-7857 and TVu-1515 are selected for the improvement of the root and yield traits.

The root system is an essential part of plants; it is responsible for anchorage of the plant to the surface on which it grows, it also aids the process of water and nutrient uptake from the soil and involved in the biotic interactions between the plant roots and the microorganisms within the soil region, such as creating barrier that inhibits pathogen and pests penetration into the plant (Ma et al., 2014; Radhakrishnan et al., 2014). In some species, the root functions as reservoir of nutrients in addition, for example, cassava roots store starch. The root system also contributes to soil health, which refers to the capacity of the soil to function as a living ecosystem that sustains microorganisms, plants and animals (Xue et al., 2014; Saikia et al., 2015). The root system is also explored for soil erosion control (Ola et al., 2015). Some plants can absorb heavy metals and other toxic compounds from the soil and accumulate the substances in aerial parts which can then be harvested and disposed off in a process known as soil phyto-remediation (Glick, 2003).
Roots are capable of actively foraging resources from their environment. The root system is the interface between nutrient in the soil and the ability to achieve yield in plants. The availability of nutrients in the soil solution determines root growth and proliferation (Lynch, 1995; Akpan and Mbah, 2016). Nitrogen and phosphorus are the most important inorganic nutrient for plant growth, and they often limit the primary productivity in natural systems as well as cropping systems, unless when they are supplied as fertilizer (Treder et al., 2014). The length of the root is related to the amount of nutrient the plant can take in, while the limit to which the root grows affect the plant productivity and yield (Lynch, 1995; Hodge et al., 2009). Quantifying the morphology and spatial distribution of the rooting system (root architecture) is important as a means of determining the availability and accessibility of water and nutrients and hence improving crops and managing soils for higher crop yield (Gregory, 2009). The root architecture includes the entire root system or a large part of the rooting system of an individual plant. This character has not been measured in most crops in the humid rainforest zone of Nigeria, most especially; no study has focused on the relationship between cowpea yield and its root traits. Yield in crops is quantitatively inherited, improvement of yield trait requires an approach of selecting plant characteristics that have high heritability and which correlate with yield.
The root system arises from the coordinated control of an endogenous genetic system and the action of environmental stimuli such as the pH, temperature, water level, microbial and chemical constituent. The nutrient level, health and type of substrate strongly influence the rooting characteristics, that is, the root growth, structure and architecture of the root system, as such, a healthy root system play vital role in the crop productivity. Most plant breeding efforts fail to focus on the relationship between root system and crop yield, probably because of the underground location of the root system. Paez-Gracia et al. (2015) submitted that plant breeding efforts centred on the modification of root traits to increase crop yield can result in the development of more stress-tolerant crops and enhance the capacity of the plant to explore the soil for better absorption of water and nutrient. The ability to improve root traits to translate into higher yields would be remarkable accomplishment for the breeder, such parental lines with the desirable root characters  can be selected as breeding lines to be advanced through the crop improvement process.
Cowpea (Vigna unguiculata (L) Walp.) is an important legume crop grown in the West African cropping systems; it is a very useful source of plant protein. Cowpea has many beneficial qualities, such as (1) it has early maturation characteristic; many cultivars flowers in 48 days and reach maturity in  60 days, (2) it is highly digestibility, (3) it fixes atmospheric nitrogen (N) in the soil, (4) it has high phosphorus (P) use efficiency, (5) it can reproduce itself by seed dispersal, (6) it is a desired forage and cover crop, (7) it can improve soil structure with its deep roots, (8) it reduces erosion and weeds through its rapid growth and soil coverage (Singh et al., 1997; Ola et al., 2015). Cowpea is nutritionally very useful; it has high digestible protein, 15 to 26%; carbohydrate 55 to 66%; several minerals and vitamins, such as iron, zinc, B-vitamins (Umoren, 1997), the leaves and green pods are also consumed as a leafy vegetable and as animal feed. The average area under cowpea cultivation is about 11.3 million hectare and the world production is 3.67 million tonnes (Singh et al., 2002), yet the production is grossly insufficient based on the demand for the crop as dependable protein source. Cowpea is a severely neglected crop because of its African origin, it deserves greater attention especially for people living in sub-Saharan Africa.
The objectives of this study were to evaluate some yield components and root morphology traits in cowpea, and establish the relationship between the yield component and root traits. The result of this work can serve as novel resource for plant breeders and others interested in elucidating the valuable factors affecting root architecture for practical crop improvement.

The experiment was conducted in the Teaching and Research Farm of the Department of Crop Science, Faculty of Agriculture, Forestry and Wildlife Resources Management, University of Calabar, Calabar, Nigeria. Calabar (latitude 4.5 °N; longitude 8.0 °E) is in the rainforest ecology; it is rain-fed with rainfall ranging between 2000 and 3500 mm, temperature ranging from 27 to 35°C and relative humidity of 70 to 85% annually. The rainy season spans from March to October annually, it is bimodal with peaks in July and September and has a short dry spell in August, although, there is really no month without rain which results in persistent flooding. Udoimuk et al. (2014) deduced that the rainfall pattern in Calabar has enhanced wind erosion and desertification, soil erosion and coastal flooding.
Ten accessions of cowpea were obtained from the Genetic Resource Centre, International Institute of Tropical Agriculture, Ibadan, Nigeria; the accessions were TVu-215, TVu-1130, TVu-1131, TVu-1515, TVu-7838, TVu-7857, TVu-1358, TVu-7906, TVu-10983 and TVu-16196. The accessions were grown in polyethylene pipes; 60 cm long, 15 cm in diameter, perforated along their length. Three seeds were sown per polyethylene pipe, placed in a completely randomized design, in five replications; the number of seedlings per pipe was thinned down to one on the 15th day after
sowing. The pipes were filled with top soil to two-third their length before seed sowing; the pipes were placed outside the screen house and irrigated manually as needed. At maturity, the pipes were slit open and the soil soaked in water to loosen the roots for measurement. The second experiment was on 338 m2 field; three seeds were sown on 30 plots measuring 3 x 2 m each, laid out in a randomized complete block design, in three replications; the planting distance of 50 cm intra-row, 60 cm inter-row and 100 cm inter-block.
Data were taken on the following traits at harvest: root length (cm); root volume (cm3) determined by measuring volume of displaced water after gently dipping root system into water in Eureka can; root biomass (g) measured with Havana weighing balance model SP 20; root density (g per m3) equals biomass divided by volume; number of lateral roots; weight of root dry matter (g) and root moisture content (g) equals difference between root biomass and root dry matter. The yield component traits were number of days to pod maturity, number of pods per plant, pod length per plant (cm), number of seeds per pod, weight of pods per plant (g), weight of seeds per plant (g), shelling percentages and 100-seed weight. Standard agronomic practices regarding ridge making, weeding and pest control were carried out. The data collected were subjected to analysis of variance (ANOVA) using GENSTAT (2005) software and significant means were separated with Duncan new multiple range test (DNMRT).
Linear correlation coefficient (r) was computed between the cowpea root and yield traits:

Where; rxy = correlation coefficient between trait x and trait y; cov(x,y) = covariance between x and y; vx = variance of x and vy = variance of y. 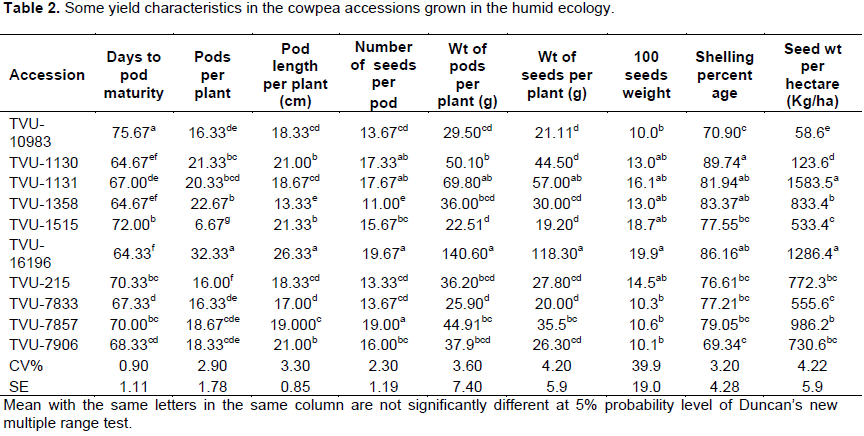 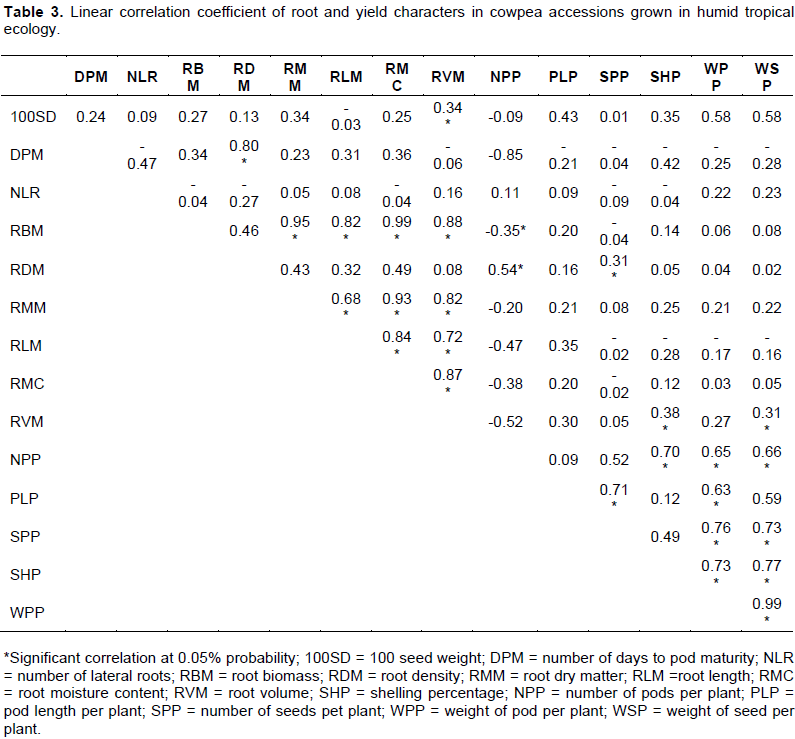 Most studies on crop yield  improvement  focus  on  shoot biomass, branching, other shoot traits, diseases and pests resistance, and hardly on the root traits. The root system is underground in most plant species, including cowpea; it is a very important character in plants because of its roles in water and nutrient absorption from the soil, in anchorage, in interfacing with the soil microorganisms and as food storage structure. According to Akpan and Mbah (2016), the root system is the link between the soil nutrient and plant productivity. Paez-Garcia et al. (2015) noted that different root traits enable plants to respond, adapt and thrive in different environments, which implies that root traits can be the focus of crop breeding effort. Watanabe et al. (1997), Singh et al. (1999) and Comas et al. (2013) identified large root diameters, long roots and heavy root biomass and density as traits associated with the development of plant productivity in drought conditions. Some traits in this study were at variance with results of Watanabe et al. (1997), Singh et al. (1999) and Comas et al. (2013), for example, root biomass related inversely with the number of pods per plant. Most of the root traits had poor correlation with the yield traits. Therefore, root system traits in the humid ecology do not need robustness to capture water and nutrients from the soil.
Secondly, some root traits such as root volume, root biomass and root length are controlled by multiple genes, indicating that non-genetic factors would play significant role in the inheritance of the traits, whereas the yield traits such as number of seeds per plant, pod length and number of pods per plant are controlled by single genes (Sangwan and Lodhi, 1995). Cowpea is a self pollinated crop, therefore adoption of mass selection as breeding method to improve root and yield traits at the same time would be slow.
TVu-16196, TVu-1130, TVu-1131, TVu-215, TVu-7857 and TVu-1515 were the best in yield performance, these accessions are therefore selected for improvement of the root and yield traits and recommended for the humid tropical agro-ecology.