A study was carried out in Enderta district, northern Ethiopia, with the objective of investigating traditional cattle milk and butter production, off take and traditional handling and utilization pattern of bovine milk and butter. Respondents who have milking cows and experience of dairying were purposively selected for the study. A semi structured questionnaire and checklist were prepared to collect the data through interview, farm visit and group discussion. Milk and butter were the most common dairy products that had different utilization patterns. Milk was used for household consumption, calf feed, accumulated on daily bases for fermentation and for sell; whereas, butter was used for household consumption as food, for cosmetic purpose and for sell. The overall average milk off take per day per household was 6.81±0.57 L of which, 62.94% was traditionally processed to butter and butter milk. The overall average butter production per household per week was 1.25±0.05 kg out of which, 80.2% was allocated to market and the remaining to cosmetic and sale. The dominant milking utensils in the area were ‘Kordo’, ‘Gefho’ and ‘Jerican’. These were used for milking, fermenting and churning, respectively. Milk vessels were smoked for the purpose of increasing shelf life of milk and milk products. The interest of farmers engaging on dairy farming is increasing; but they lack awareness on keeping quality of milk and milk products. Almost half of the producers in the area did not use detergents to wash their milk vessels. Therefore, milk producers should be supported with strong extension service by way of introducing improved dairy technologies, improved milk handling and processing equipments.

The Tigray National Regional State is the fourth cattle populated region in Ethiopia next to Oromiya, Amhara and Southern Nations Nationalities and People’s  (SNNP) regions. It is home to 2,622,166 cattle out of which 49% are male and 51% are female (MOARD, 2007). In spite of this huge resource, little work has been done on dairying; except the work of characterization of urban dairy production in Mekelle (Negussie, 2006) and that of Improving Productivity and Market Success (IPMS) in Astbiwenberta and Alemata districts.

Enderta is one of the districts in south east zone of Tigray region, Ethiopia. The capital city of the region Mekelle with population of 169,207 (CSA, 2006), is encircled within Enderta district making it more advantageous from milk market proximity point of view. However, study on the current production, handling and utilization pattern of cattle milk and its products are not studied in the district. Such information is critically important for designing appropriate dairy development strategies, market orientations and providing base line information for further research and development. Moreover, agricultural knowledge and information are key components in commercial smallholder dairy developments as this play a significant role in improving productivity, linking producers to markets, improving competitiveness in markets and thus leading to improved livelihood, food security and national economies (Tesfaye et al., 2008).

In view of the above, the present study was designed to investigate cattle milk and butter production off take and their traditional handling and utilization pattern in Enderta district.

Four peasant associations “Dergeagen” from transhumance and the  rest   three    “Didba”,   “Kedemay-weyane”   and   “Arato”  from sedentary livestock production systems were selected purposively based on their cattle population and milk production potential. Proportional probability to size (PPS) method was applied to select 150 respondents from the above specified areas in the district.

As indicated in Table 1, the overall average milk off take recorded in this study was 6.81±0.57 L per day per household. This finding was in line with the report of Tesfaye (2008) for Metema district (6.3 L per household per day). But this result was lower than the result recorded (19.7±1.2 L per day per small farms) by Negussie (2006) in Mekelle zone. This might be related to the number of lactating cows and breed type they had as most of the households in the present study had local cows.

In this study, 8.45, 63.02, 14.12 and 14.37% of milk is utilized for household consumption, fermented for further processing, calf feeding and marketing, respectively (Table 2). This result is in agreement with the report of Abera (2008) who reported that 10 and 15% milk was allocated for consumption and sale in Kuyu district of Oromia regional state, respectively. The proportion of milk allocated for consumption in this study was quite smaller than the finding by Tesfaye (2009) in Metema district  (23.3%).  Milk  allocated  to  fermentation  in   this finding (62.94%) was similar to that of Metema district (63.2%), but the milk for sale in this study (13.55%) is higher than that in the finding for Metema district (0.4%). This difference may show that, milk sale is more accustomed to the people of the current study area or there may be better market access.

As indicated in Table 3, ‘kordo’ and plastic materials were the  dominant   milking   utensils  in    transhumance   and sedentary production system, respectively. 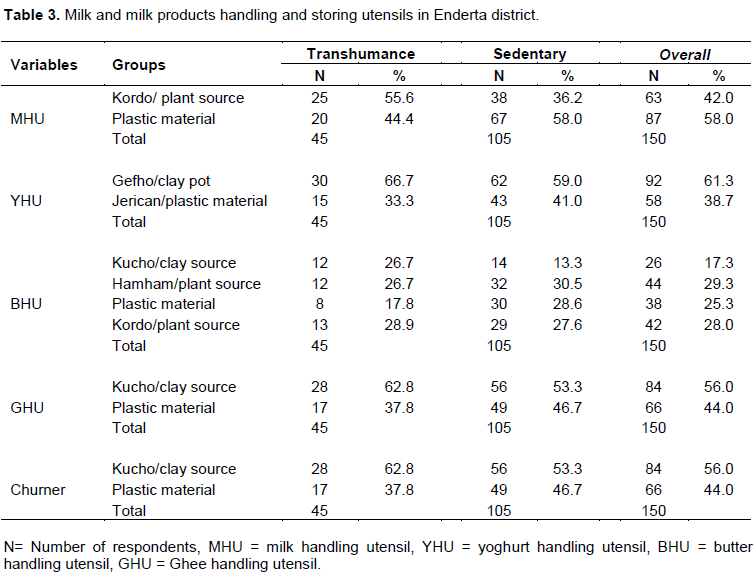 On overall basis, 61.3 and 38.7% of the respondents use ‘Gefho’ and ‘Jerican’ to store milk for fermentation. ‘Laga’ and Jerican were also used as a churning material in 51.3 and 48.6% of the farms, respectively. Dairy farmers in north western Ethiopian highlands also use different milk utensils like gourd and clay pot for collecting, storing and processing milk (Ayenew et al., 2009). Tesfaye (2007) and Belete (2006) also found milk producers using traditional materials for milk handling, storing and churning in their respective study areas of Amhara  region.  78.9%  milk  equipments  in  Bench maji zone of Southwest Ethiopia were made of plastic materials (Gemechu and Amen (2017). The finding on milk producers using plastic materials for milking is similar to study of Tadesse et al. (2015) who reported that 54.3% of milk producers used plastic materials for milk handling in and around Hosanna Town, Hadya Zone of Southern Ethiopia (Figure 1). 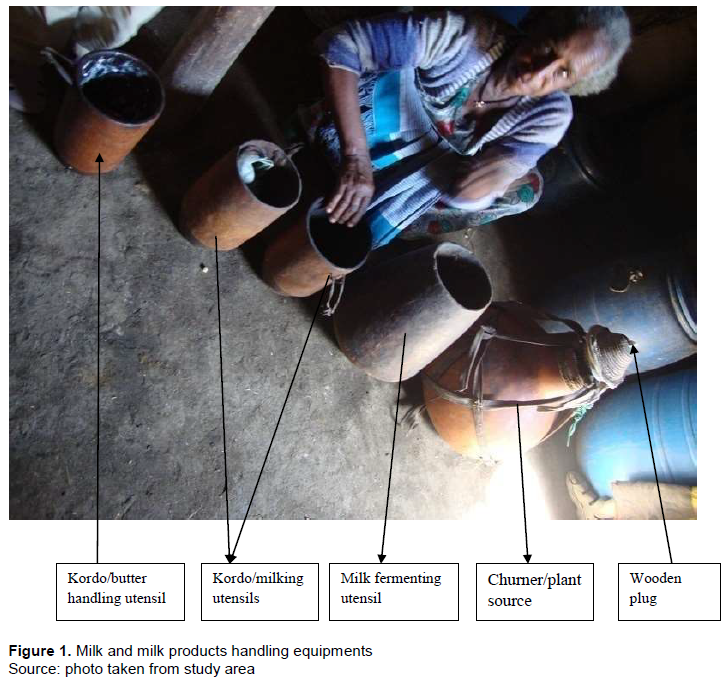 As indicated in Table 4, all (100%) of surveyed respondents applied smoking of milk utensils for different purposes. They had different reasons for smoking milk handling and storing utensils. The major reasons forwarded were: for good flavor of the products, for longer shelf life of the products, to  have  orange  colored  butter and to have attractive odor butter in order of importance. Practice of milk utensils smoking was also reported by Adebabay (2009), Kedja (2008) and Tesfaye (2007) in Bure, Meiso and Metema districts, respectively. 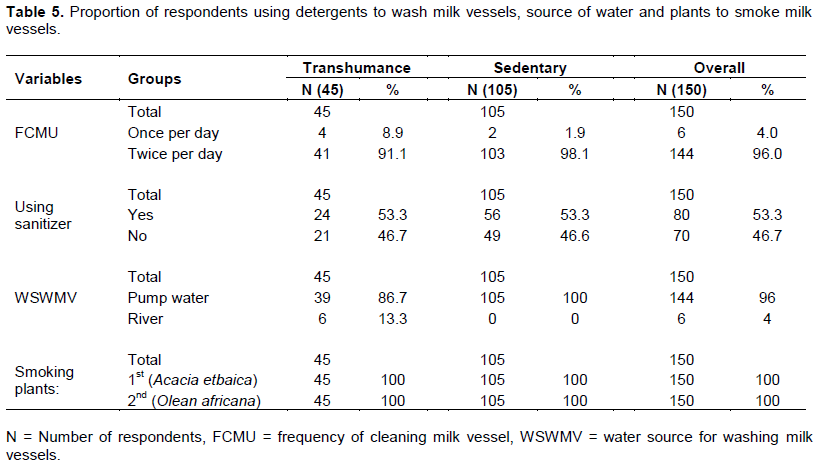 Farmers smoke their milk vessels by two commonly known plants in the district. The first and frequently selected plant to smoke milk vessels throughout the sampled respondents was Acacia etbaica locally called ‘Seraw’. When this plant is not available, they use Olean africana locally called ‘Awlie’. Different authors also indicated that milk producers in different parts of Ethiopia used plants to smoke their milk vessels. For instance, Lemma et al. (2005), Kedja (2008) reported that Olea africana is the most frequently used plant for smoking milk vessels in semi arid areas of Oremia region of the country. Similar to this study, Aysheshim et al. (2015) also reported that majority of the producers in urban and peri  urban   area  of  Dangila  town  of  Western  Amhara region used acacia species and O. africana to smoke milk vessels as a first and second choice, respectively.

Milk production is one of the important sectors of livestock production in Enderta district. It is a source of income and employment. Out of the daily milk produced, the overall daily allocation of milk for household consumption, milk accumulated for fermentation, calf feed and for sell was 9.80, 62.94, 13.62 and 13.55%, respectively. And the overall weekly allocation of butter for household consumption, cosmetic and sell was 3.85, 15.97 and 80.2%, respectively.

In transhumance production system, ‘kordo’ was the dominant  milking   utensil,   but  in  sedentary  production system, plastic materials were the dominant milking utensils. Majority of the respondents used ‘Gefho’ and others used ‘Jerican’ material to store milk for fermentation. ‘Laga’ and ‘Jerican’ were used as churning materials. Milk producers in the area selected Acacia etbaica locally called ‘Seraw’ for smoking milk vessels. Even if the interest of farmers engaged in dairy farming is increasing in the area, they lack awareness on keeping quality of milk and milk products. Nearly half of the producers did not use detergents to wash their milk vessels. Therefore, milk producers should be supported with strong extension service by way of introducing improved dairy technologies, improved milk handling and processing equipments in place of the plastic milk handling and storing utensils, as these plastics facilitate spoilage of the products.