Eucalyptus cultivation has undergone great expansion in recent years due to the increase in commercial production of this wood for the paper, cellulose and steel industries. One of the main factors responsible for production losses is insect attack. The main insect that acts as a pest, devastating eucalyptus plantations is Thaumastocoris peregrinus, being controlled through the application of synthetic insecticides. The objective was to evaluate the potential of the aqueous extract of neem leaves for the alternative control of T. peregrinus. The survival of T. peregrinus was evaluated in two experiments with higher (20, 40, 60 and 80%) and lower (1, 5, 10 and 20%) concentrations of aqueous extract of neem leaf. The experiment took place under laboratory conditions at a controlled temperature of 25 ± 2°C. In the first experiment, higher concentrations were more effective in reducing survival. In the second experiment, the lowest concentrations reduced less effectively. It is concluded that the aqueous extract of neem leaves in higher concentrations has an insecticidal effect against T. peregrinus, reducing the survival of adults of this species.

The cultivation of eucalyptus (Eucalyptus spp.) has undergone extensive expansion in the forestry sector in recent years, due to the increase in commercial production of this wood for the paper, cellulose and steel industries. Parallel to the growth of this sector, there has been an increase in the appearance of  pests  that,  depending  on the intensity, can result in economic losses (Seaton and Hardy, 2020; Deng et al., 2021).

In Brazil, the incidence of Thaumastocoris peregrinus, a relevant insect pest of the eucalyptus crop, can cause damage characterized by leaf tanning, loss of photosynthetic capacity and, consequently, leaf fall, impairing plant development (Soliman et al., 2019; Saliba et al., 2019). In some cases, in eucalyptus species susceptible to the pest, the damage can lead to the death of the trees (Barbosa et al., 2019; Machado et al., 2020).

The first symptom associated with the damage is the silvering of the leaves which, over time, becomes a reddish-brown color, featuring a tan appearance, hence the popular name of the bronze bug (Martínez et al., 2018; Castiglione et al., 2020). As there are different species of eucalyptus, consequently there are differences in susceptibility to the insect pest, leading to variation in the development and reproduction of the insect depending on the food offered, that is, the insect pest can become more specific, resistant and devastating (Mifsud and Carapezza, 2020).

One of the control measures for T. peregrinus is the application of chemical pesticides that spread quickly, being easily transported by eucalyptus seedlings (Calvo et al., 2018; Wilcken et al., 2019). Research is needed in order to find alternative ways to control this insect, which are less aggressive to the environment, as is the case with chemical pesticides. In this bias, alternative controls arise, such as the biological one, and the use of natural products, such as those based on plant extracts.

Among the natural insecticides, the use of alternative products such as powders, plant extracts and essential oils can be highlighted (Gabaston et al., 2018; Karkanis and Athanassiou, 2021). These products are used as effective, low-cost control methods, helping to preserve the environment with less contamination, and may become a more suitable practice for sustainable agriculture (Cahenzli et al., 2018; Soares et al., 2019).

One of the most used plants for obtaining plant extracts is the neem (Azadirachta indica), which has a proven insecticidal effect on more than 400 species of insects (Lima et al., 2021). Neem can have an ovicidal, larvicidal and/or deterrent effect on insects, in addition to causing growth delay, reduced fecundity and fertility, inhibiting feeding and inducing deformities (Ascher and Meisner, 2005; Ismaë et al., 2018; Iqbal et al., 2021).

Thus, progress in the line of knowledge about the toxicity of natural products on T. peregrinus, becomes essential to help control this insect-pest, as well as to reduce economic and environmental impacts. Thus, the objective of this research was to evaluate the potential of the insecticidal effect of the aqueous extract of neem leaves  on   adults   of   T.   peregrinus  under   laboratory conditions.

The experiments were carried out in the Entomology laboratory at the State University of the Region of Tocantina do Maranhão, in the northeast region of Brazil, under laboratory conditions and at a controlled temperature of 25 ± 2°C. 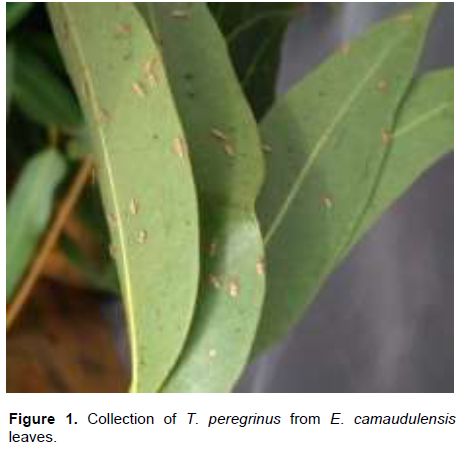 Experiment 1: To prepare the extracts, the collected neem leaves were transferred to an oven and allowed to dry for three days at a temperature of 60°C. Then, the leaves were ground and the powder sieved in a 0.08 mm sieve. To obtain the aqueous extract, 100 g of crushed leaves were used and 900 ml of distilled water were added, leaving it to rest for 48 h in order to extract the water-soluble compounds. After this time, the suspension was strained through a layer of cotton fabric. From the obtained extract, dilutions were carried out to obtain the concentrations of 20, 40, 60 and 80% that were used in the experiment. The experiment consisted of individual Petri dishes containing a leaf treated at a specific concentration and an unsexed adult insect.

Experiment 2: To obtain neem leaf powder, the same methodology described above was used. To obtain the aqueous extract of neem leaves, 50 g of the crushed leaves plus 500 ml of distilled water were used and left to rest for 48 h in order to extract the water-soluble compounds. After this time, the suspension was strained through a sieve with a layer of cotton wool. The extract obtained was diluted and prepared at concentrations of 1, 5, 10 and 20% where, unlike the previous experiment, the concentration of 20% becomes the highest. The experiment consisted of individual Petri dishes containing a leaf treated at a specific concentration and an unsexed adult insect.

Eucalyptus leaves were cut to fit inside Petri dishes (9 cm in diameter).  Then,  the  leaves were immersed in the extract solution at different concentrations for a period of 30 s, placed on a newspaper and left outdoors to dry for about half an hour. Then, the leaves were transferred to Petri dishes lined with non-moistened filter paper. A stink bug was placed in Petri dishes, and a previously treated eucalyptus leaf was offered. Then, each plate was closed with plastic film to prevent the escape of insects (Figure 2). The plastic film was perforated with a pin to ensure the circulation of oxygen inside the Petri dish. The experiment contained 5 treatments and 15 repetitions, including the control. The evaluations were carried out every 24 h, counting the live bugs and removing the dead ones. The leaves were replaced every 3 days by new and treated leaves. The survival of insects subjected to aqueous neem extract was evaluated.

In the second experiment, the eucalyptus leaves were immersed in each extract for a period of 30 s and then placed on a newspaper and left outdoors to dry for about half an hour. Then, the leaves were transferred to Petri dishes lined with filter paper and a piece of cotton moistened  with  water.  Ten  stink  bugs were  transferred  to Petri dishes, and a previously treated eucalyptus leaf was offered. Then, each plate was closed with plastic film to prevent the escape of insects (Figure 3). Each Petri dish was considered a repetition totaling 10. The evaluations were carried out every 24 h and counting the number of live insects and removing the dead ones. Leaves replaced every 2 days with new, untreated leaves. The experiment contained 5 treatments and 10 repetitions. 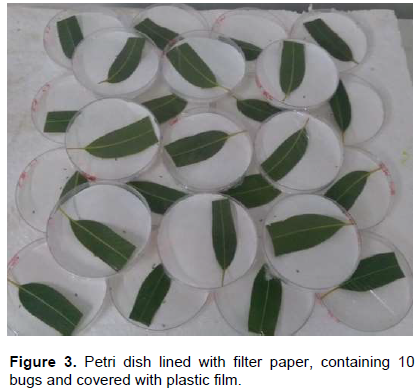 The experimental design used was completely randomized for the two experiments. The results were submitted to survival analysis by the Kaplan-Meier test and the mean mortality time were compared by the Holm Sidak (P<0.05) method. All procedures were performed using Sigma Plot version 12.5 software.

In the results obtained, it was found that there was a decrease in survival time when the insects were exposed to neem concentrations of 60 and 80%, differing significantly from the untreated control, with mean survival time of 2.333 and 2.133, respectively, and of 3.067 days in the control treatment. The mean survival of insects treated at concentrations 20 and 40% did not differ significantly from the control treatment, with a mean time of 2.733 and 2.533 days, respectively (Figure 4 and Table 1). 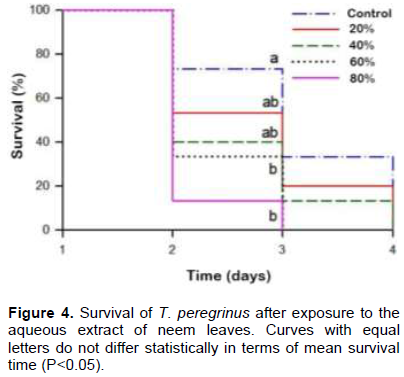 In the second experiment, the treatments of concentrations 5, 10 and 20% differed statistically from the other concentrations, where the survival averages were 1.780; 1.440 and 1.388, respectively. The 1% concentrations and the control treatment differed from each other and the mean survival  was  2,385  and  2,367 days (Figure 5 and Table 2).

The efficiency of neem leaf extracts in this work was greater than that observed on the rice stink bug population (Neves and Nogueira, 1996), due to the use of higher concentrations. However, other studies have demonstrated the effect of neem on other hemiptera, such as Bemisia tabaci (Aleyrodidae) that were fed tobacco seedlings and underwent a systemic treatment with 500 ppm azadirachtin, initially fed normally, but after completion from the initial feeding, the interval before the next subsequent feeding was significantly increased and the feeding activity thereafter was suppressed (Chaitanya and Kumar, 2018; Kumar et al., 2019). It was also observed that aphids that fed on artificial diets containing a much lower concentration of azadirachtin (25 ppm) showed no signs of feeding inhibition during the initial 24 h period of access to the diets, but their feeding rate dropped dramatically over the period 24 h subsequente (Sousa et al., 2021), constituting a side effect of exposure to azadirachtin.

In most phytophagous insects the food inhibition action and physiological effects result from the ingestion of azadirachtin. Azadirachtin makes the food unpalatable to insects by direct action and these effects can result in "side effects" that include a reduction in food consumption and alteration in the digestive capacity of insects, resulting in hunger and death of these insects (Farder-Gomes et al., 2021).

Azadirachtin  can also directly affect the muscle cells of the alimentary canal, decreasing the frequency of contractions and increasing muscle flaccidity and, as a result, the growth and development of insects, as well as all physiological events that depend on adequate nutrition and its absorption and transformation in the alimentary canal are compromised (Bezzar-Bendjazia et al., 2017; Khater, 2020; Vieira et al., 2021). Therefore, its effectiveness is directly related to the content of azadirachtin, although many of the other compounds also have biological activity and increase their effects (Zhong et al., 2017; Bernardes et al., 2018; Shu et al., 2021).

The stink bug T. peregrinus is a very sensitive insect to environmental changes and other factors such as weather, stress, host susceptibility, appropriate habitat, parasitism and diseases (Deiana et al., 2018; Corallo et al., 2019; Groba et al., 2021). This may partially explain the mortality observed in the control treatment, as the insects were transferred the day after collection to Petri dishes after collection in the field.

The results obtained in this work are in agreement with those described in the literature, in which the insecticidal potential of neem is reported, in which the use of the plant in the form of extracts presented activity against insects. However, the mode and mechanism of action of neem-based insecticides has not been fully elucidated.

The use of neem leaf extracts, therefore, may be an alternative for the control of eucalyptus brown stink bugs, due to its ease of obtaining the raw material and preparing the extract. Complementary studies are needed to verify the effectiveness of leaf extracts under field conditions to confirm the potential of this botanical insecticide in eucalyptus crops.