Cinnamon and citronella essential oils in the in vitro control of the fungi Aspergillus sp. and Sclerotinia sclerotiorum

With the increase in the world’s population, there is a growing concern about food security, regarding production and food storage. Among the major challenges of modern agriculture, the decrease in the  usage  of  agrochemicals in disease, pest and weed management stand out, which aim  at   sustainable   agriculture   (Farooq  et   al.,  2013; Javaid and Shoaib, 2013; Ootani et al., 2013). Plant pathogens, which cause disease, are responsible for large yield damages in many economically important crops. The use of agrochemicals in soil fumigation, foliar application or seed treatment is the most common strategy for plant disease management (Javaid and Shoaib, 2013). However, due to the adverse effects of pesticides on human health and the environment, consumers are increasingly demanding products that are free of chemical residues (Farooq et al., 2013; Javaid and Shoaib, 2013; Ootani et al., 2013).

The natural compounds from plants are safer than synthetic chemicals, which are an option for plant disease management (Javaid and Shoaib, 2013; Abreu et al., 2016). Among these natural compounds, cinnamon (Cinnamomum sp.) and citronella (Cymbopogon sp.) essential oils are used as a viable option for fungal disease management in plants, mainly due to their antifungal properties (Pawar and Thaker, 2006; Negrelle and Gomes, 2007).

Among the fungi that cause damage and/or are spread by seeds, the fungi Aspergillus sp. and Sclerotinia sclerotiorum (Lib.) de Bary, which present world distribution and a wide range of hosts (Boland and Hall, 1994; Perrone et al., 2007). The main symptoms observed in seeds infected by the genus Aspergillus are rotting, a decrease in germination, abnormal seedlings development and damping-off in plants. Some species of this genus may produce during storage secondary metabolites called aflatoxins, which are highly toxic, mutagenic and carcinogenic to human and animals (Perron et al., 2007).

The fungi S. sclerotiorum causes considerable decreases in several agricultural crops production worldwide, especially in soybeans, beans, potatoes and sunflowers, causing stem, pods and leaves to rot (Boland and Hall, 1994). The ability of this fungi to survive in the seeds, cultural remains and soil, associated with the gradual resistance to the fungicides used for their control, makes them difficult to manage (Mueller et al., 2002; Jiang et al., 2013).

In order to find efficient alternatives for disease management caused by these pathogens, the objective of this study was to analyze cinnamon and citronella essential oils in the in vitro control of fungi Aspergilus sp. and S. sclerotiorum.

The experiment was a completely randomized design, in a 2x4+2 factorial  scheme  [essential  oils  x  concentrations  +   (fungicide  + standard control)], both for the fungi Aspergilus sp. and S. sclerotiorum. Five replicates were used for each treatment, and each Petri dish (90 × 15 mm) was considered one repetition.

Cinnamon (Cinnamomum cassia) and citronella (Cymbopogon winterianus) essential oils were used in doses of 0.2, 0.4, 0.8 and 1.6 mL L-1 (+ 1 Tween 80 to 1%) and the Captana (480 g L-1) and thiophanate-methyl + chlorothalonil (200.0 g kg -1 + 500.0 g kg- 1) fungicides at doses of 3 and 2 g L-1, for fungi Aspergilus sp.  and  S. sclerotiorum, respectively. The employed essential oils which are of commercial origin and obtained through hydrodistillation were diluted in potato dextrose agar (PDA) medium in Petri dishes, and mycelium discs with 5 mm diameter, except for the control treatment (standard control), which was maintained only in the PDA culture medium. Subsequently, the plates were incubated in a Biochemical Oxygen Demand (BOD) incubator at 25 ± 1°C and photoperiod of 12 h.

The analyzes were done daily and consisted of: (1) The diameter of the fungus colonies were measured in orthogonal position (mean of the two opposite measurements), being closed only after filling the control plate with the fungus Aspergilus sp. and/or S. sclerotiorum, respectively; (2) sporulation of fungus: Aspergilus sp., a spore suspension was prepared for each treatment by adding 20 mL of sterile distilled water to the Petri dishes followed by light friction of the fungus colony so that the fungal reproductive structures of the culture medium were released with the aid of a Drigalski loop. The solution formed was filtered in a beaker, using a glass funnel with a gauze layer, allowing the passage of water suspension containing spores and retention of other materials, such as hyphae. The suspension was homogenized and conidia were counted in the Neubauer chamber (hemocytometer). Sporulation analysis was not performed for S. sclerotiorum because this fungus does not produce spores.

In order to calculate the percentage inhibition of mycelial growth (PIMG) and sporulation (PIS) (Edgington et al., 1971), the following equation were used:

The values of the calculation of PIMG or PIS were used to determine the effective dose to inhibit the mycelial growth and/or sporulation of the pathogen by 50% (DE50) and 100% (DE100) by adjusting the regression equations.

The data obtained on the mycelial growth and sporulation were compiled in a database using spreadsheet, in Microsoft Excel 2013 and submitted to the analysis of variance, and the means, grouped by the Scott-Knott test, in level of 5% using the R® program version 64.1 (R CORE TEAM, 2017).

There was a significant interaction between the treatments, which differed from the control according to the doses and oil tested (Tables 1 to 4).

Table 1. Mycelial growth (cm) and number of spores (x104 spores mL-1) of fungi Aspergillus sp., due to the essential oil of cinnamon and citronella essential oil. 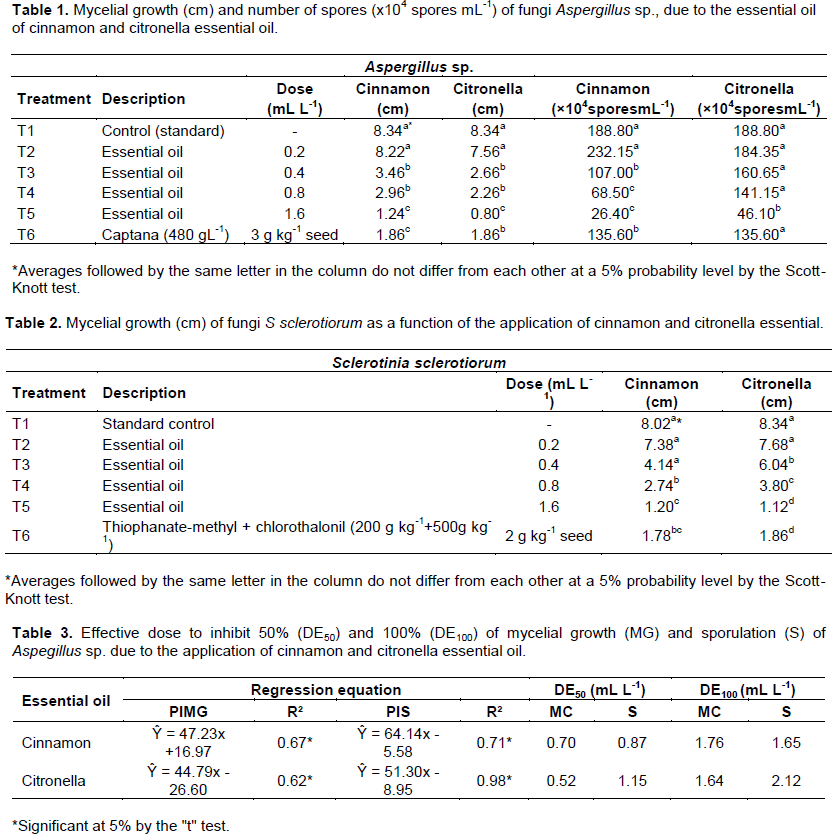 The doses of 0.8 and 1.6 mL L-1 (Table 2) of cinnamon essential oil determined lower mycelial growth of the fungi S. sclerotiorum, differing from the other doses used, but did not differ significantly from thiophanate-methyl + chlorothalonil (200 + 500 g kg-1) commercial fungicide. However, citronella essential oil at the dose of 1.6 mL L-1 proportioned mycelial growth statistically equal to the commercial fungicide, differing from the other doses used.

Losses related to cereals, legume grains such as beans, soybeans and other dry grains, which are deteriorating food, are between 20 and 60%. Approximately 25 to 40% of the world's cereals are contaminated with mycotoxins produced by different fungi during storage (Kumar et al., 2007; Prakash et al., 2013). The development of products based on natural compounds, such as essential oils for crop protection and, consequently, the  decrease  in  food contamination by mycotoxins stands out today due to their importance in production and human health (Kumar et al. , 2007; Ootani et al., 2013; Prakash et al., 2013).

In general, most of the chemical components of the essential oils are terpenoids, including monoterpenes, sesquiterpenes and their oxygenated derivatives. Terpenes are active antimicrobial compounds of essential oils. The mechanism of action of this class of compounds is not fully understood, but it is speculated involving the membrane disruption by these lipophilic compounds (Farooq et al., 2013; Javaid and Shoaib, 2013,  Ootani  et al., 2013).

Several studies have been developed using cinnamon and citronella essential oils in the control of the fungi Aspergilus sp. (Viegas et al., 2005; Pawar and Thaker, 2006; Khan and Ahmad, 2011; Tian et al., 2012; Prakash et al., 2013, Ootani et al., 2016) These studies present positive results regarding the use of these oils in the inhibition of fungui growth and sporulation. Khan and Ahmad (2011) studying the in vitro effect of cinnamon, citronella and clove oils and their major components found that due to the accumulation of cinnamaldehyde  at multiple sites of action, mainly in cell membranes and endomembranous structures of the cell fungus, cinnamon oil provided greater inhibition of sporulation when compared to the others.

For the mycelial growth of S. sclerotiorum (Table 4), cinnamon essential oil presented the lowest values of DE50 and DE100.

The inhibition of the mycelial growth of the fungi S. Sclerotiorum on the plates in which cinnamon and citronella essential oils  were added proves the antifungal action of these oils (Pansera et al., 2012; Jiang et al., 2013; Wafa`a et al., 2014).

Cinnamon and citronella essential oils controlled the fungi Aspergilus sp. and S. sclerotiorum, with is recommended the dose of 1.6 mL L-1, for both oils.