A study was conducted to evaluate the production performance of koekoek chickens at Adami Tulu Research Center. Feed consumption, age at point of laying, annual egg production, mortality, and egg quality parameters were used as evaluation parameters. Mean feed consumption of starter, grower and layer of koekoek chickens at Adami Tulu Research Center was 56.4±4.6, 84.3±6.3 and 124±8.6 g/day, respectively. Koekoek chickens attain sexual maturity at 5 months and produce 213± 12.4 eggs per year. Their hatchability was 60% and mortality rate was 4% at Adami Tulu Research center.  Their egg weight in gram (g) was 51.17±3.2.  The egg yolk color, yolk weight in gram (g), albumin weight in gram (g) were 5.08±0.91, 14.96±1.6 and 31.2±2.7, respectively. The current study revealed that koekoek chickens adapt well to semi-arid agro-ecology of Ethiopia. Koekoek chickens are fast growers and good layers. So day-old chicken producers and distributors in semi-arid area can consider them as candidate breeds in their production. These dual purpose breeds need good managements like quality feed provision, good sanitation and vaccine administration. Therefore livestock extensions and farmers who have interest in introducing these breeds into their farm should have to provide necessary management practices to fully utilize their production potential.

Poultry production provides a major income-generation activity from sale of chickens and eggs. Poultry production also helps to meet the growing demand of animal source proteins. The  fewer cultural or religious taboos associated with poultry products (Tadelle et al., 2003) and its contribution to balanced human diet have increased demand for poultry meat and eggs. Poultry production needs little investment compared to other livestock production, hence land less laborers and people organized in micro enterprises are able to raise  chickens with low inputs. Farmyard/backyard type production, in which native chickens scavenge most of their food in rural community, is characterized by low egg production and poor growth rates. Lack of high egg layers and fast growth rate chickens breed are a major constraint to Ethiopian farmers (Zemelak et al., 2016). In Ethiopia poultry sector is characterized by low production and productivity; the growth rate is much lower than that of fast growing populations (ILRI, 2004). With this potential and production  system  native  chickens cannot meet the high demand of Ethiopian populations. Because of the listed reasons exotic chicken breeds have been introduced by missionaries and government at different times to meet the high demand of poultry products. Transformation of both traditional backyard poultry production and expansion of exotic layer is very important to close the future projected gap in total meat and egg consumption (LMP, 2015). Introduced   exotic pure breed chickens have been used to up-grade indigenous village chickens or used by commercial producers for egg and meat production.

Koekoek chickens are one of the dual purpose breeds introduced to Ethiopia. Since it is a tropical breed, it can be considered as suitable candidate breed for overcoming the problem of environmental stress. The breed is a composite of the White Leghorn, Black Australorp and Bared Plymouth Rock (Grobbelaar et al., 2010). Koekoek chickens were bred for the production of brown eggs and for the attractive deep yellow colored carcass (Grobbelaar et al., 2010). The breed matures at five months age, lays good numbers of brown eggs with excellent resistance to disease. The breed was introduced by Ethiopian Institute of Agricultural Research because of its good production traits (fast growth rate and good egg layers). However, in semi-arid agro-ecology of Ethiopia the breed was not evaluated. Previously introduced commercial and temperate breed failed to be sustained under farmers` management condition because of lack of evaluation in a representative environment to provide the unique management practices needed. Agro-ecology based evaluation of chickens enhanced the economic contribution of chickens for farmers (Zemelak et al., 2016). Evaluating the production performance of koekoek chickens in a new environment like semi-arid agro-ecology of Ethiopia was useful and contributed to the success of their uptake. Therefore, the study was done to evaluate the production performance of koekoek chickens in semi-arid agro-ecology of Ethiopia.

Production performance evaluation of Koekoek chicken was done at Adami Tulu Research Center.  Adami Tulu Research Center is located in mid rift valley of Ethiopia at an altitude of 1650 m above sea level and latitude of 7°9`N and 38°7`E. The average annual rain fall is 949 mm with an average minimum and maximum temperature of 14 and 29.6°C respectively; the relative humidity  is 57.42 (ATARC, 2016).

The experimental pens were cleaned with water and detergents, and then disinfected before the experimental chickens were housed. The experimental pens were littered with properly dried tef (Eragrostis tef) straw. A total of two hundred day old koekoek chickens   were   brought   from  Debre  Zeit  Agricultural  Research Center to be evaluated at Adami Tulu Research Center.  Chickens were vaccinated against Newcastle, Bursa (Gumboro), and fowl pox diseases. Four brooding hay boxes each with a size of 4 m2 were used for rearing of chickens for four weeks in starter house. Fifty chickens, with 10 male to 40 female rations were reared in each hay box for four weeks.  Heat was supplied with 250 watt bulbs in brooding hay boxes until four weeks.

Three plastic tube feeders and three bell shaped (round) plastic waters were used to provide feed and water every day in hay boxes. After four weeks chickens were transferred to grower house that was partitioned with mesh wire into four sections. In each four sections (with 16 m2), a total of fifty Koekoek chickens with a ratio of ten males to forty females were housed. Layers house were also partitioned into four sections; in each sections fifty Koekoek chickens with ten males to forty females chickens were housed similar to the growing period.

Four plastic tube feeders and four bell shaped (round) waters were used to provide feed and water during both growing and laying period.  Tef straw used for bedding material was removed and replaced with new one every two weeks during the first four weeks.  During growing and laying period, contaminated tef straw was removed and replaced with a fresh straw at two months intervals. An antibiotic (oxytetracycline 20% powder) was given to minimize the risk of disease outbreak. The chickens were also disinfected every two months during the replacement of the straw to protect the birds from external parasites.

Chemical composition of the diet

Nutritional composition of the diet used during study is given in Table 1. From the commercial ration given in Table 1, 75, 90 and 130 g feed was offered during starter, grower and layer period respectively. The evaluation was done for two years on-station to collect all data. 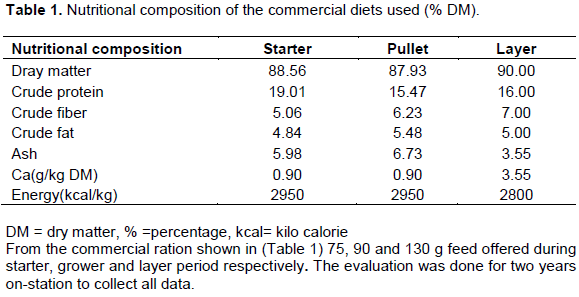 Feed intake was calculated by deducting feed refusal from feed offered each day.  Mortality and egg production were recorded daily. Body weight of the chickens was taken at two months interval and age at point of egg lay was measured using suspended spring balance. Data on egg quality parameters were taken at a time (36 to 37 weeks) after onset of egg laying. Eggs were weighed using an electronic digital balance. Egg length, egg width and egg shell thickness were measured using electronic digital caliper and yolk color was determined by adjusting the score of yolk color on color fan from Roche. Albumin weight was calculated as the difference between egg weight and sum of shell weight and yolk weight.

Partial budget analysis was done using the formula developed by CIMMYT (1988); Ehui and Rey (1992) and Ibrahim and Olaloku (2000). The price of feed, medicine and chemicals were recorded. Feed intake per bird and price of feed per kilogram were used to calculate the cost of feed consumed by the chickens. Total gross return was obtained from sales of chickens and from total eggs laid per bird.

Data were analyzed using descriptive statistics. Standard deviation was used to compute the variation of the mean.

Feed intake of Koekoek chickens in the current study was higher than the feed intake reported by Banerjee et al. (2013) for the same breed most probably due to different quality feed used and temperature. Weight of Koekoek chicken was lower than that reported by Russel (2014) (3.5-4.5 and 2.5-3.5 kg) for male and female, respectively but higher than the 1.7 kg reported by Nthimo et al. (2004) for matured body weight of the female Koekoek chickens.  The   disparity   is   probably   due  to  different management practices like feeding, health care and environmental differences. As shown in Table 2, Koekoek chickens were a fast growing breed and their feed intake was also high. they attain sexual maturity earlier (at five months) compared to indigenous village birds in Ethiopia that attain sexual maturity in seven months (FAO, 2004)  and produce  higher eggs compared to the 36-60 eggs production potential of indigenous birds per year (FAO, 2004).  Age at point of laying of koekoek chicken in current study was similar to the report of Dessalew et al. (2013). The annual egg production of Koekoek chickens was higher than the 187.04± 13.4 eggs per year reported by Dessalew et al. (2013) and 195.9 eggs per year reported by Grobbelaar et al. (2010). This is probably due to different managements like feed type, feeding system and different climate that can influence the performance of chickens. The comparatively lower productivity associated with domestic chickens can mostly be attributed to low standards of management, health care and feeding (Russel, 2014). The current study used good quality layers diet which probably resulted in higher egg production compared to the on- farm study and lower egg production reported by Dessalew et al. (2013).

The mortality rate of Koekoek chickens in the current study was very low (4%) indicating their adaptability to semi-arid environment. Even it adapted more than the previously introduced Fayoumi chickens whose mortality rate was 7.2% under similar environment (Tesfa et al., 2013) indicating preferability of semi-arid area. The average egg weight of Koekoek chickens was lower than the average weight of 55.7 g reported by Grobbelaar et al. (2010) but higher than 48.84 ± 6.77 g reported by Dessalew et al. (2013). This was most probably due to different ages of the layers, number of eggs considered for weight taking. The differences also were most probably due to difference in quality of feed used that enhanced the deposition of egg albumin and egg shell. The yolk colour value for koekoek chickens’ egg was lower than the yolk color value of 10.79± 1.98 reported for the same breed by Desalew et al. (2013). In the current study, the chickens kept under intensive management condition and less exposed to green feed may have caused lower yolk color compared to the result reported by Desalew et al. (2013).

As partial budget analysis showed net return of 184 Ethiopian birr per bird was obtained. The major in-put cost that determined the return was feed  cost  compared to non-feed costs (Table 4). Similar to the current study, Gopalakrishnan and Lal (2004) reported feed cost representing 65-75% of the total of intensive poultry production. Formulating poultry ration from locally available agro-industrial by product and grain is a good alternative to minimize feed cost and a recommended input to maintain their production performance.

Koekoek chickens were well adapted to semi-arid agro-ecology of Ethiopia. They are fast grower and good layers. These dual purpose breeds need good manage-ments like quality feed provision, good sanitation and vaccine administration. Therefore livestock extensions and farmers who have interest in introducing the breeds into their farm should have to provide necessary management practices to fully utilize their production potential.