Mango (Mangifera indica L.) is the third most important fruit crop in the tropics following citrus and banana. It is consumed as a fresh fruit and different forms of preparations for its multifaceted nutritional values. Mango production in Ethiopia is constrained by infestation of white mango scale (WMS), Aulacaspis tubercularis Newstead. White mango scale was recorded from Ethiopia for the first time in 2010, in a mango orchard in Loko in the western part of the country. This study was conducted from June 2013 to May 2014 to document the population dynamics of white mango scale in Western Ethiopia. Randomized Complete Block Design was used for the sampling in two mango orchards, Arjo and Bako.  Scale population peaked in April at Arjo and in May at Bako showed marked decline with decreasing precipitation. Abundances of eggs, crawlers and sessile stages of the scale showed significant differences among most of the study months (Pï€¼0.05). The abundance of sessile scales was significantly higher at Bako than at Arjo (Pï€¼0.05). In both study areas, white mango scales were significantly more abundant on the upper leaf surfaces than the lower (Pï€¼0.05). At Bako, male scale numbers were significantly higher than those of the females (Pï€¼0.05). The study found that the decline and build-up of white mango scale populations are affected by rainfall, whereas the effects of other environmental factors on scale numbers need to be investigated.

Mango is the third most important fruit crop in the tropics after citrus and banana (Louw et al., 2008). It is consumed as a fresh fruit and as other kinds of preparations for its high contents of sugar, protein, fats, salts  and   most   of   the   vitamin  types,  among  others (Griesbach, 2003; Kayode and Sani, 2008; Shah et al., 2010; Nabil et al., 2012). Mango production is constrained by white mango scale, Aulacaspis tubercularis Newstead, in countries such as Mexico, India, Pakistan, Italy, Ghana, Kenya, Madagascar, Mauritius, Tanzania, Uganda and Zimbabwe, among others (Labuschagne et al., 1995; Pena et al., 1998; El-Metwally et al., 2011; Salem et al., 2015; Hodges and Harmon, 2016). White mango scale inserts its stylets in the soft parts of mango tree and sucks saps. As a result it causes yellowing of leaves, development of conspicuous pink blemish on mature and ripe fruit and dieback to mango plantation (El-Metwally et al., 2011; Abo-Shanab, 2012). Infestation in young trees may lead to excessive fall off leaves, retarded growth and death of the whole plant (Nabil et al., 2012). The development of conspicuous blemishes on mango fruit skin which was infested by white mango scale markedly damages mango fruit export potential and eventually leads to economic loss (USDA, 2006, 2007). Three mineral oils, Diver®, CAPL2® and super masrona®, were tested in field against white mango scale and showed different levels of effectiveness (Abo-Shanab, 2012). In Kenya, deltametrine and pyrethrin were recommended for the control of white mango scale (Findlay, 2003).

Infestation of mango by A. tubercularis in Ethiopia was first reported in 2010 in a mango orchard owned by Green Focus Ethiopia Ltd. (Dawd et al., 2012) which used to import mango seedlings from South Asia and hence it is deduced that the pest probably entered Ethiopia accidently on imported seedlings. Within one-year of first record, white mango scale was reported to have dispersed 100 km west of the original site (Fita, 2014). The damages of white mango scale induced panic and frustration in Western Ethiopia for the loss in crop production and indirect sociological consequences, since mango plantation serves as shade for animals and conference hall for the people, in addition to generating income and serving as food in the region (Dako and Degaga, 2015). This study was planned with the objective of understanding the population dynamics of different developmental stages of white mango scale which would be the most important and prior step for the purpose of management of the pest.

In each orchard, five blocks were specified, one at each of the four corners and the centre. Hence, Randomized Complete Block Design was used. From upper, middle and lower canopies of a mango tree within every block, a total of  ten leaves  were  plucked.

Sampling started from the trees at each corner in the blocks and continued toward the centre, and that started from central block continued in the four cardinal directions on successive trees, once within a month for 12 consecutive months, from June 2013 to May 2014. The leaves collected from each tree were placed in a separate cloth bag, labelled, kept in a plastic bag and taken to Addis Ababa University, Science Faculty, Insects and Vector Research Laboratory. The leaves were observed under stereomicroscope and numbers of white mango scales were recorded. In this study, the first instar was recorded as crawler whereas all the remaining developmental stages and the adult were collectively considered as sessile stage. Male and female sessile stage mango scales were identified and recorded. In this study it was impossible to include fully matured live male scales, as they fly out immediately up on achieving maturity. Accordingly, male mango scale armours were broken open by the use of dissecting needle to avoid counting empty scales. Furthermore, the needle was used to lift the armour of the adult female for ease of counting the eggs underneath. Weather data on rainfall and temperature of the study area were obtained from National Meteorology Agency of Ethiopia (Ethiomet, 2016).

Population sizes of all the developmental stages of white mango scale showed statistically significant differences (P<0.0001) among most of the study months at both study orchards (Tables 2 to 4). 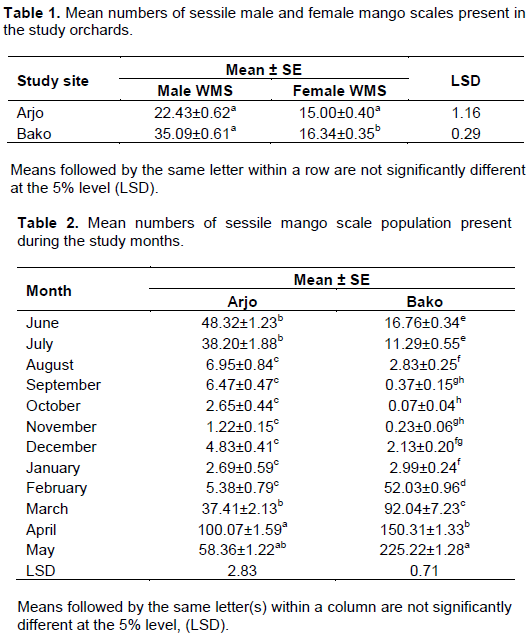 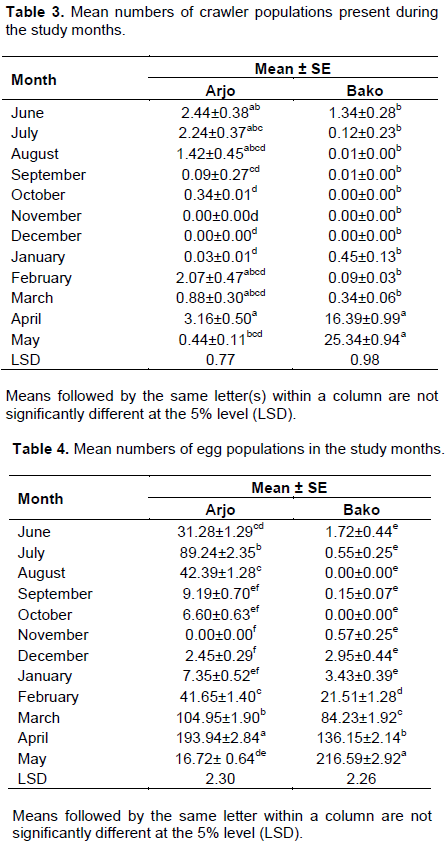 All developmental stages of white mango scale were found to have been significantly abundant (P<0.0001) on upper surface of mango leaf than the lower at both study orchards (Tables 5 to 7).

Population fluctuations of eggs, crawlers and sessile mango scales followed a more-or-less similar pattern over the months of the study year. Marked population fluctuations were observed, with a general trend of decline with decreased precipitation. Detectable infestations persisted more-or-less throughout the year at Arjo but scale population fell below detectable levels in some of the  dry  season months at Bako (Figures 1 to 6).

Populations  of   white  mango  scales  in  Arjo  and  Bako begin to build up in February and reach their peaks in April in Arjo and in May in Bako. Population peaks of scale  crawlers were also evident in these months. This is an essential finding for control of the pest through targeting the crawler stage, which is sensitive to both systemic and contact insecticides (Buss and Turner, 2006). Population of white mango scale remained at an extremely low level when average monthly rainfall was below 10 mm, implying that white mango scale is highly affected by drought.

This study, therefore, indicates that the decline and build-up of mango scale population is affected by rainfall in two ways, though other contributing factors need to be investigated further.

Firstly, a minimum average monthly rainfall of about 50 mm is required to initiate build-up of the scale population. The optimum rainfall for the insect to reach its peak population may vary spatially and temporally, as it was found to be 110 mm in April at Arjo and 140 mm in May at Bako. The build-up of the scale population coincides with the physiological maturity of mango fruit, both happening at the beginning of the rainy season in the study area. Dako and Degaga (2015) reported that maturation and ripening of mango fruit begin during the first months of rainy season, that is, in March to April and continues for few months, vis-à-vis significant infestation of mango fruits by white mango scale, in Western Ethiopia.

Crawler and sessile stages of mango scale populations were more abundant at Bako than at Arjo. One possible explanation, among others, may be associated with the negative impact of high heavy rain intensity on the scale population at Arjo, as this site receives a higher amount of annual rainfall than that at Bako (Ethiomet, 2016).

Both minimum and maximum temperatures at the current study sites  were  more  or  less  stable;  and  this study did not evaluate the impact of extreme temperatures on the population dynamics of white mango scale. However, the size of the scale population was higher during the months with relatively more extreme maximum and minimum temperatures. Peak populations were recorded in the months with maximum monthly temperatures of 35 and 31°C at Arjo and Bako, respectively, indicating that A. tubercularis tolerates higher temperatures. This record does not agree with the conclusion of Labuschagne et al. (1995) which found that white mango scale had a low tolerance to high temperature, and as a result its population declined in temperatures above 30°C. In all observed cases during this investigation, crawler-stage population of mango scale was much smaller than any of the other developmental stages. One possible explanation for this would be that white mango scale stays as crawler stage for shorter period of time compared to sessile stages (Labuschagne et al., 1995). Moreover, crawlers move to different parts of the host plant in search of suitable settling sites and may also be dispersed away from the plant by various factors all of which would reduce their numbers on the sampled leaves.

All developmental stages of mango scale were found to be more abundant on the upper leaf surfaces in both study orchards. This finding agrees with the study by Nabil et al. (2012) on mango in Egypt which also recorded that A. tubercularis preferred the upper leaf surface compared to the lower one. Investigations as to why the scale prefers the upper leaf surface to the lower seems to have been overlooked. However, Beardsley and Gonzalez (1975) said that McLaren (1971) associated the settlement of the majority of California red scale crawlers, Aonidiella aurantii (Maskell), on the upper surfaces of citrus leaves with geotaxis behavioural response. On the other hand, the male crawler of Florida red scale (Chrysomphalus ficus Ashmead) was associated with a positive response to light direction (Beardsley and Gonzalez, 1975).

The best period for application of insecticide for the control of white mango scale is from April to June, when white   mango   scales   in   general   and  the  vulnerable crawlers in particular are the most abundant in Western Ethiopia.

To better understand the optimum temperature range for white mango scale, controlled experiments, under laboratory conditions, may be required.

The authors thank the Department of Zoological Sciences, Addis Ababa University, for its financial and material support for the study. Mr Feyisa Dhuguma, the owner of Arjo mango orchard gave full permission to perform this research in his orchard and also assisted in collecting data, and hence deserves to be acknowledged.