Fremont mandarin: Fruit with a long shelf life for the fresh fruit market

China is the largest global producer of mandarins, with a production of approximately 15 million tons (mi t), more than 50% of which is aimed at the internal market, followed by Spain (2 mi t), who is responsible for most of the global export production, and Turkey, with a production of 942 thousand tons. Brazil is the fourth largest global producer of mandarins, with 938 thousand tons produced in 2013 (Food and Agricultural Organization (FAO), 2015). In spite of Brazil's prominence, the existing range of mandarin varieties is still very limited. More than 80% of the mandarin orchards in Brazil are based on Ponkan mandarins (Citrus reticulata Blanco) and Murcott tangor [C. reticulata × C. sinensis (L.) Osbeck]. New research is being developed to identify varieties that are easy to peel, that have a homogeneous and attractive color, and that may result in an extended harvesting season, thereby constituting an additional source of income for small citrus producers (Pimentel et al., 2014). This is the case for Fremont mandarin, a hybrid resulting from the crossing between Clementine (C. clementina Hort. ex Tanaka) and Ponkan (C. reticulata Blanco) mandarins. Fremont is a promising variety because it exhibits precocious maturation in mid-season, a yellow-red fruit peel, a fruit shape and peel texture that are very similar to clementines (Saunt, 1990), resistance to Alternaria alternata, the fungus responsible for Alternaria brown spot (Pacheco et al., 2012), and is productive under Brazilian conditions (Pio et al., 2006).
The quality of citrus fruits is extremely important for their commercialization in the fresh fruit market. Quality is basically evaluated through an analysis of the fruit physicochemical characteristics (size, color, texture, acidity, soluble solids, SS/TA ratio) and sensory properties (product analysis using the sense organs). Many of these characteristics are specific to a particular cultivar or are influenced by climate conditions. However, some of them, such as appearance, flavor and texture, may be improved through pre- or post-harvest techniques (Malgarim et al., 2007).
The permanent supply of fresh fruit to the market is increasingly important, making it necessary to extend the fruit offer by extending the harvesting season. The mandarin harvesting season is relatively short and may be extended using technological operations. If well conducted, these will minimize post-harvest losses as well as maintain fruit quality and extend the period of commercialization. These fruits therefore reach the internal and/or external market when the prices are more profitable (Nascimento et al., 2011). Sensory analysis, which indicates how the fruits are perceived by the human senses, complements physicochemical analysis and is essential to assess, analyze and interpret the reactions produced in response to food characteristics. This type of analysis is used for quality control by many companies because it can be used to evaluate the degree of product acceptance by consumers and because it indicates what changes need to be made to increase product acceptance, which increases consumers’ preference for specific products in an increasingly demanding market  (Manzocco  and Lagazio, 2009).
The Brazilian citrus industry lacks new varieties for fresh consumption and often new varieties are not accepted by the producer. Consequently, the goal of the present study was to evaluate the physical, chemical and sensory quality of new variety, Fremont mandarin, which were uncoated or coated with commercial wax, at different storage times and under different storage conditions. It´s also with the objective of minimize losses and maintain fruit quality, and verify their acceptability and purchase intent by Brazilian consumers.

Post-harvest assay (storage)
The experiment was conducted at the Laboratory of Citrus Quality and Post-harvest of the Citrus Center Sylvio Moreira of Agronomic Institute (IAC), Cordeirópolis, São Paulo (SP), Brazil. Ripe fruits of the Fremont IAC 548 variety (Citrus clementina x C. reticulata Blanco) were used. The fruits were collected in June 2012 from three-year-old plants grafted onto Rangpur lime rootstock and planted at a 6 m x 3 m spacing (Figure 1).
The fruits were surface sterilized with 5% sodium hypochlorite, dried, and subjected to physicochemical analyses. The following parameters were evaluated: (i) fresh mass (g), measured by direct weighing using a digital scale with a precision of 5 g; (ii) longitudinal (Ç¾ L) and transverse (Ç¾ T) diameter, in centimeters, measured directly using a digital caliper; (iii) juice yield, determined by squeezing the fruit using a juice extractor OIC OTTO 1800 and calculated as the juice mass/fruit mass ratio, expressed as a percentage (%); (iv) fruit mass loss, calculated as the difference between the initial fruit mass and the fruit mass on each sampling day, expressed as a percentage (%); (v) fruit peel gloss, measured at two equidistant points on the equatorial region of the fruits, using a Glossmeter ETB6-F1; (vi) firmness, measured by applying pressure at two equidistant points on the equatorial region of the fruits, using a digital penetrometer (Turoni); and (vii) acidity (%), soluble solids - SS (°Brix), and the soluble solids/acid ratio; fruit peel color, determined through determination of L* (lightness), a* (intensity of red color, ranging from green to red), and b* (intensity of yellow color, ranging from blue to yellow), using a digital colorimeter (Minolta CR-400) (Papadakis et al., 2000). a* and b* were used to calculate the hue angle (ºh=tan-1(b*/a*)) and chroma (c*=√(a*)2+(b*)2), which is a measure of the color strength.
The collected fruits were subjected to the following storage treatments: fruits with or without wax coating stored under refrigeration (8 ± 2°C and 90 ± 5% R.H.), and fruits with or without wax coating stored at room temperature (21 ± 2°C and 60 ± 5% R.H.), i.e., the control. Wax coating was performed using commercial wax combined with fungicides to avoid the development of typical post-harvest pathogens (UE Wax, 16% citrosol + 4.0 mL Imazalil + 1.0 L UE Polyethylene + starch), according to the procedures used in processing units. Physicochemical analyses (described previously) were performed weekly until 42 days after the beginning of storage. A completely randomized experimental design with split-plots was used, replicated three times. The factors tested were storage time (six weeks), storage conditions (ambient and refrigerated), and wax coating (coated and uncoated). The plots consisted of 10 fruits for the mass loss assay, and 28 fruits per box for the storage assay. Regression analyses were performed, and models were selected for each variable based on the significance of the parameters and the R2 value. 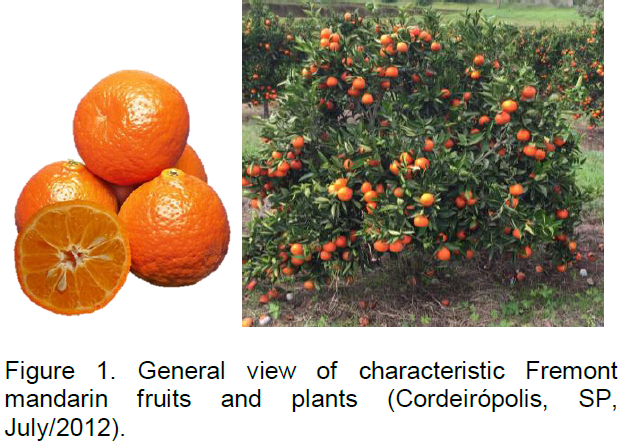 Sensory analyses
Sensory analyses were performed weekly to determine the acceptance and purchase intention of Fremont mandarins. The evaluations were performed by a team composed of 10 panelists who are employees of the Citrus Center Sylvio Moreira and who consume mandarins weekly; their ages range between 25 and 60 years old. The samples were identified using four number codes and were presented to the panelists on disposable plates in the presence of drinking water to cleanse the palate between samplings. The panelists evaluated the appearance of the fruit (general appearance, peel color, peel texture, firmness, ease of peeling) and internal characteristics (consistency, aroma, flavor). A nine-point hedonic scale, varying from “dislike extremely” (1) to “like extremely” (9) (Behrens et al., 1999), and a structured five-point purchase intention scale, varying from "certainly would buy" (5) to "certainly would not buy" (1), were used. Data were collected using individual sheets. The present study received ethics approval from the Human Research Ethics Committee from the Federal University of São Carlos (UFSCar) according to protocol N° 2305.0.000135-11. All panelists signed an informed consent form before participating in the study (Resolution 196/96 - National Health Council). Data were subjected to analysis of variance and means were compared by Tukey test (p < 0.05). 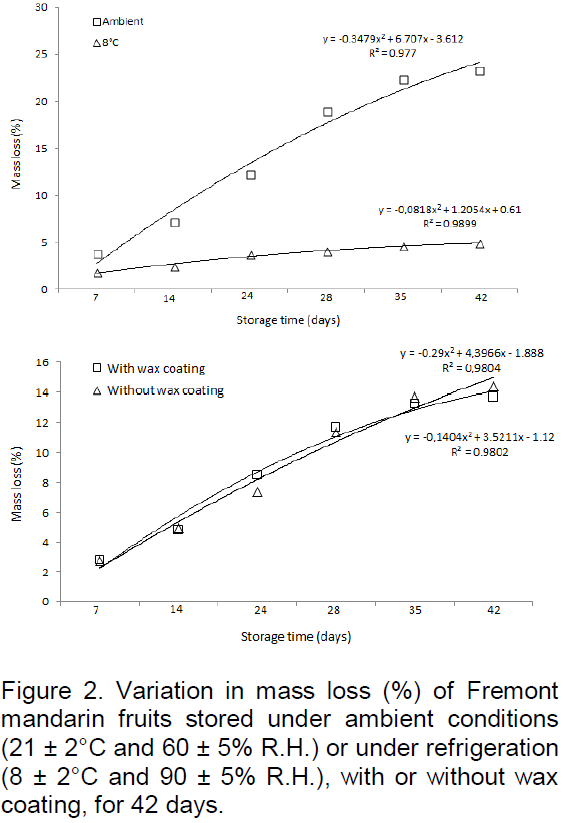 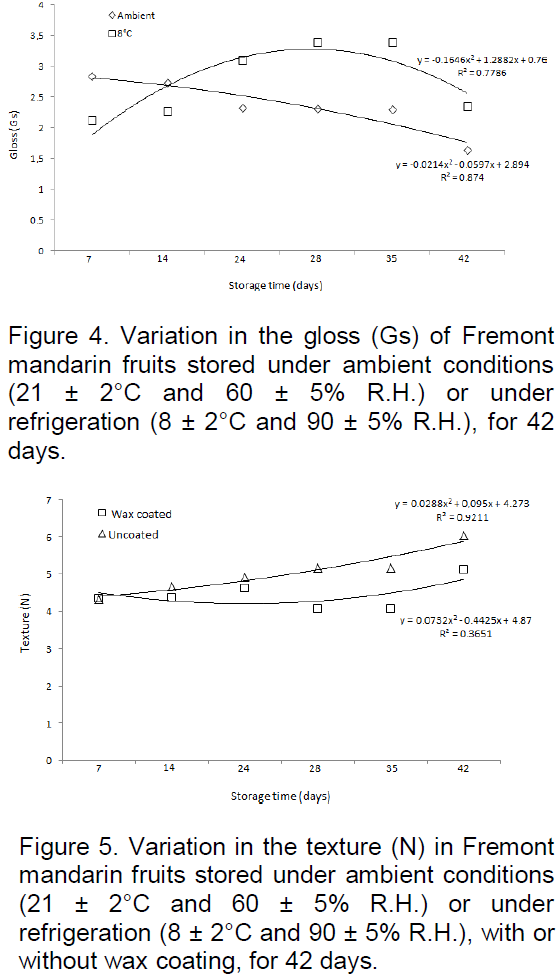 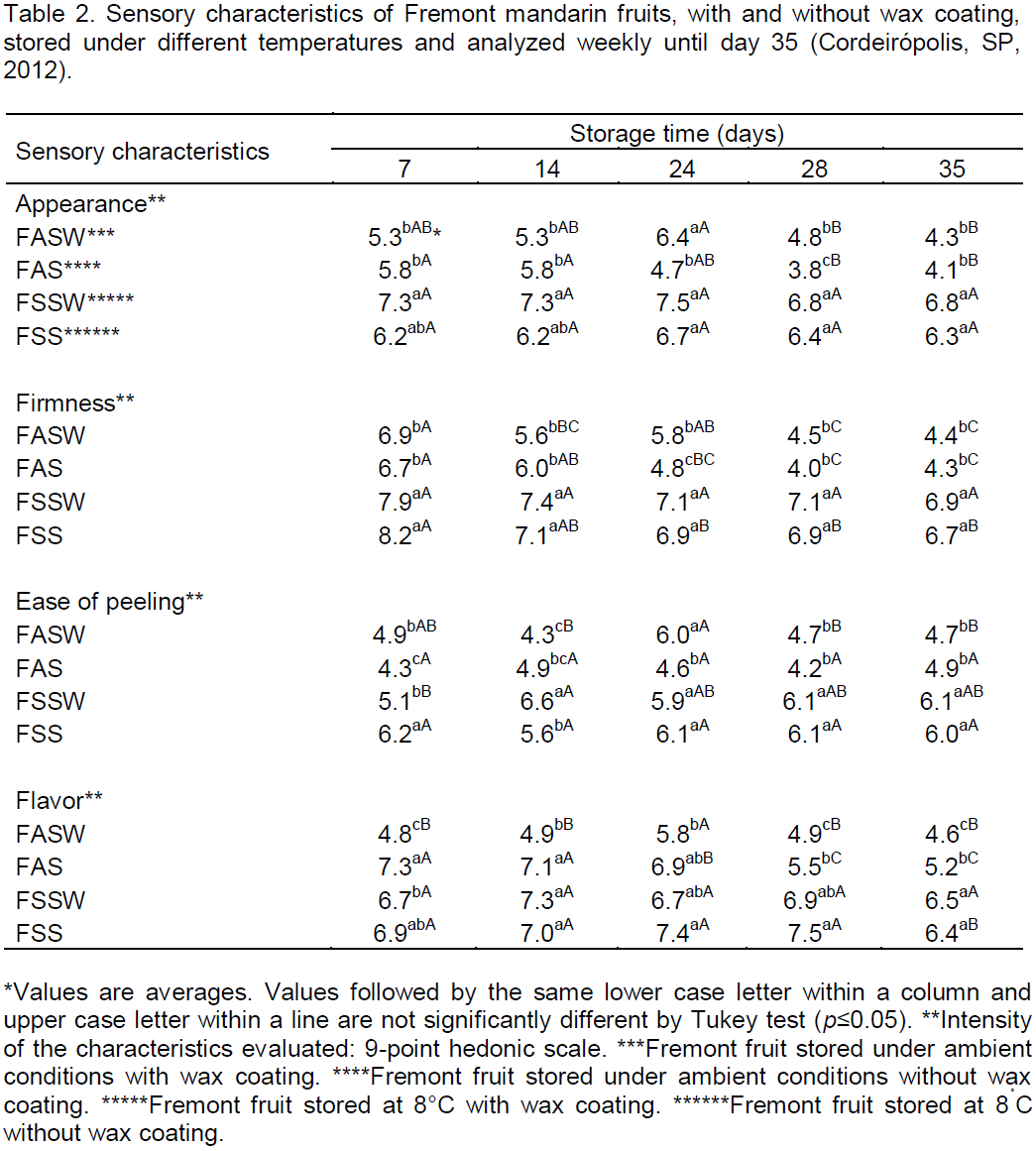 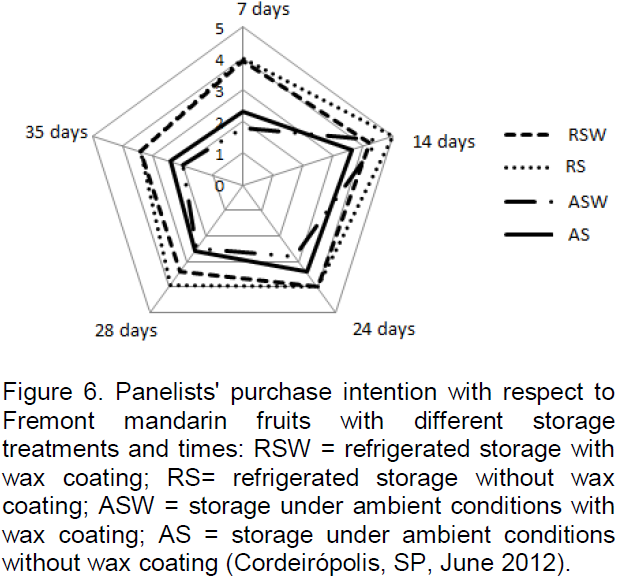 Fremont mandarins present physicochemical and sensory characteristics that are accepted by Brazilian consumers and may be stored under refrigeration (8 ± 2°C and 90 ± 5% R.H.) for 30 to 35 days without losing these characteristics. Purchase intention was higher for fruits stored under refrigeration than at ambient temperature. It is concluded that uncoated fruits stored at ambient temperature exhibit a tendency to lose quality, which confirms the need for refrigeration and wax coating for post-harvest preservation of fresh citrus fruits.