Termites are most pestiferous insects causing damage to crop and buildings. Their control still relies mainly on harmful chemical pesticides to the detriment of eco-friendly pesticides. The aim of this study was to evaluate the effect of three plant extracts on the survival rate of termite species, Macrotermes subhyalinus Smeathman and Trinervitermes geminatus Wasmann, known to cause damage to crops, vegetation and buildings in Togo. Cissus quadrangularis (Vitaceae), Pennisetum purpureum Schumach (Poaceae) and Vetiveria zizanoides Nash (Poaceae) extracts were examined for their termiticidal activity against these termites. Three formulations including acetone and hexane extracts and powder were prepared for each plant species at five different concentrations. Six replicas were made for each tested concentration with 30 workers per replica in the laboratory conditions. All the tested plants showed termiticidal activities by reducing the rate of survival duration of tested termites. The powder of V. zizanoides was very effective on M. subhyalinus; its lowest concentration (5 mg/cm2) reduced the survival rate of this termite by up to 87%. Among the extracts, acetone extract of P. purpureum caused the highest reduction of M. subhyalinus survival rate at higher concentration. Both acetone and hexane extracts of V. zizanoides were very effective on T. geminatus, reducing by more than 90% survival rate of this termite. Although these plants extract seem to bear potential termiticidal activity, however, further studies need to be carried out in order to determine their respective components.

Environmental problems caused by the persistent pesticides have gradually led to an increasing interest in the development of alternative pest control methods. With the prohibition of the chemicals, which were toxic to humans, termite control is currently centered on the use of non-chemical methods including the use of biopesticides (Verma et al., 2009; Rust, 2014).
Thus, plants with insecticidal properties could be regarded as potential alternatives to chemical pesticides. Indeed, various plants or plant extracts are used (under various formulations) to control termites or other insect pests (Isman, 2006; Dhang and Sanjayan, 2014). A broad range of plants are toxic, repellent, or have some antifeeding properties several of which were regarded as insecticides (Bläske and Hertel, 2001; Ganapaty et al., 2004, Boulogne et al. 2012; Raina et al. 2012; Addisu et al. 2014).
Osipitan and Oseyemi (2012) have evaluated the insecticidal effect of three plant extracts including Citrus sinensis, Theobroma cacao, Tithonia diversifolia and Anacardium occidentalis, against Macrotermes bellicosus. They found that the acqueous extract of these plants not only caused the mortality of tested termites, but also showed an important repellency to them. The repellent effect of extracts from few tropical plants on termite has also been reported by Maistrello et al. (2011), Osipitan et al. (2013) and Acda (2014).
The termiticidal proprieties of plants lie mainly on their secondary compounds or organic extractives such as waxes, alkaloids, fat, gums, resins, terpenes and essential oils (Pettersen, 1984). Thus, some flavonoids extracted from the Japanese larch and Larix leptolepis (Lamb) showed strong feeding deterrent activities against Coptotermes formosanus (Shiraki) (Ohmura et al., 2000; Chen et al., 2004). Recently ChowaÅ„ski et al. (2016) reported the toxicity caused by alkaloids from few Solanaceae plants. According to these authors, both formulations (metabolites and water/alcohol extracts) showed lethal and sublethal effects on tested termites and other pestiferous insects.
Locally, plants or plant products are used by farmers to control termites. Some species of living plants are usually left inside the farms in order to deter termites from crops (Sileshi et al., 2008; Mugerwa et al., 2014). In Togo, some farmers believe that keeping plants such as Vetivera zizanoides, Cissus quandrangularis and Pennisetum purpureum within the crop field deter pestiferous termites (especially Macrotermes and Trinervitermes species). However no scientific study has yet been carried regarding this assertion. Hence the aim of this study is to check the termiticidal activity of extracts from these plants through the evaluation of their effect on the survival rate of Macrotermes subhyalinus and Trinervitermes geminatus, termite species known to cause damage to crops, vegetation and buildings in Togo.

Plant materials
The plants used in these experiments include C. quadrangularis (Vitaceae) P. pupureum (Poaceae) and V. zizanoides (Poaceae). The leaves of V. zizanoides and the stems with leaves of C. quadrangularis were collected in the botanical garden of the Faculty of Science of the University of Lomé (Togo). The leaves of P. pupureum were bought in the market at Lomé. In the laboratory, these vegetable materials were cut into small pieces and dried in an air-conditioned room. After drying, they were finely crushed using a blender (OPTIBLEND 2000 TRIO) and sieved. The fine powder obtained was stored at -20°C for further use. The non-fine portion was macerated in acetone and hexane for a week then filtered and evaporated with the rotavapor in cold conditions. The extracts obtained were also stored at - 20°C.
Termites
Macrotermes subhyalinus and Trinervitermes geminatus were used in the biological tests. These termites were collected on the campus of the University of Lomé and acclimatized to laboratory conditions (28°C, Relative Humidity 70%) in total darkness (12:12H DD). During acclimatization, they were fed on fungus comb and filter paper for M. subhyainus and on straw for T. geminatus.
Biological tests
The biological tests were carried out by contact following Raina et al. (2012). Three formulations, powder, acetone and hexane extracts were used. Concentrations were expressed in mg/cm². Each concentration of powder was introduced into a glass Petri dish of 9 cm diameter.
The powder was then distributed uniformly over the surface of Petri dish. The plant extracts (acetone and hexane extracts) were initially dissolved in 5 ml of acetone or hexane respectively. The solution obtained from each concentration was put in a glass Petri dish (9 cm diameter) whose bottom was covered with filter paper. The soaked paper was air dried for 24 h. The different concentrations used are: 0.5, 1, 2, 4 and 6 mg/cm2.
Thirty workers of each termite species were exposed to each concentration and six replications were made. The Petri dishes containing the tested termites were then placed in controlled conditions of 28°C temperature and 78% relative humidity in total darkness.
After each hour and during six hours, all the Petri dishes were checked for dead termites. After the sixth hour, the checking was done at the eighteenth hour then after each 24 h until the death of all termites. The controls were done with filter paper only for tests with plant powder, and filter paper previously soaked with acetone or hexane and air dried.
Determination of survival duration
The survival duration of termites was determined according to the formula below (adapted from Krebs, 1999).

Statistical analysis
The data obtained from calculation of survival duration and the rate of survival reduction were subjected to an analysis of variance (ANOVA) at 5%, and the means were discriminated with the Student-Newman-Keuls (SNK) test using STATISTICA software, version 5.1 (1998). 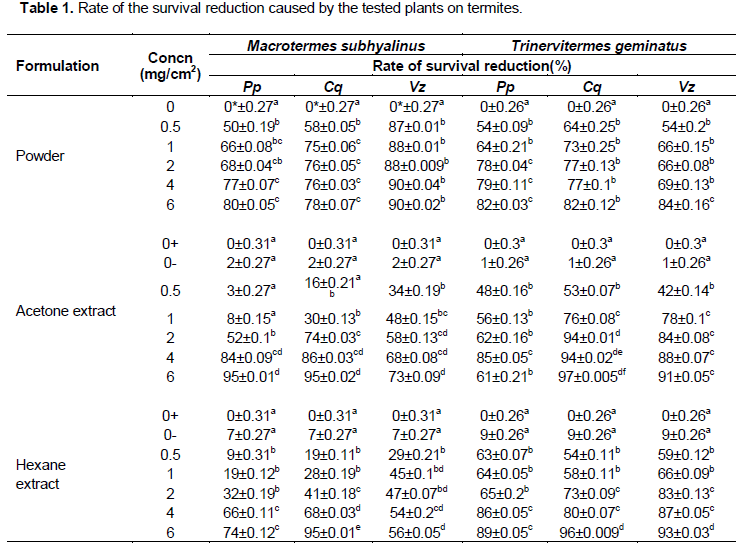 All the three tested plants showed antitermite activity by reducing the survival rate of M. subhyalinus and T. geminatus. The powder of V. zizanoides was very effective against M. subhyalinus at lower concentration. It was also very vulnerable to the higher concentration of the acetone extract of P. purpureum. Both acetone and hexane extracts of V. zizanoides were highly effective against T. geminatus. All the extracts of C. quadrangularis were pasty, thus unsuitable for these experiments.