The assessment of genetic diversity of the traditional rice varieties or landraces is an essential component in germplasm characterization and conservation to identify potential parents. In the present study SSR markers (588 SSR markers) were used for the assessment of genetic diversity and relatedness among 31 rice accessions. These included 18 accessions from Sudan and 13 from IRRI. Among the SSR markers used only 483 generated polymorphic patterns, and showed 1274 alleles. The number of alleles per locus ranged from 2 (about 214 markers) to 5 (RM16820 and AP3206a) with an average of 2.64 alleles per locus. The polymorphic information content (PIC) values ranged from 0.06 (RM3138, RM10671, SKC3, R1M7, R6M30, S07101 and S12041B) to 0.69 (RM7643), with an average of 0.39. The major allele frequency per locus varied from 32% (RM7643) to 97% (RM3138, RM10671, SKC3, R1M7, R6M30, S07101 and S12041B), with an average of 64%. Among the primers used in the present investigation, RM7643 was highly informative as it recorded the highest PIC value (0.69). The UPGMA resulted in allelic richness of four major clusters in which cluster I is composed of a high number of accessions. The pairwise genetic dissimilarity indices revealed the highest genetic dissimilarity of 62.3% between Pipanfary Red1 and FL478. The lowest genetic dissimilarity was found between NBGS3 and NBGS2 (4.1%), but they showed wide dissimilarity with other accessions. The study highlighted the usefulness of the application markers for efficient characterization of the Sudanese rice accessions.

Information on genetic variability within cultivated crops has a strong impact on plant breeding strategies and conservation of genetic resources (Dean et al., 1999; Simioniuc et al., 2002). This is particularly useful in the characterization of individuals, accessions and cultivars, in determining duplications in germplasm collection and for the choice of parental genotypes in breeding programme (Abu Assar et al., 2005). In Sudan, rice was introduced from Congo since 1905 (Hakim, 1963). It was also known that Oryza punctata Kotschy was growing wild for long time in rain-fed depressions (Mac, 1992). Since then, and after numerous introductions and evaluation, rice is now being grown under irrigation in Gezira and White Nile of Sudan and Bahr El-Ghazal, Upper Nile (Malakal), and Jonglei of South Sudan. Although rice has the largest ex situ germplasm in the world, which made great contribution to rice breeding (Jackson and Juggan, 1993); however, the genetic diversity of rice in Sudan is not well understood.

Exploring diversity in a landrace collection is very important for identifying new genes and further improvement of the germplasm (Thomson et al., 2007). Therefore, detailed study on genetic diversity of the native germplasm of rice in Sudan and South Sudan is very important for the initiation of rice breeding programme that could result in selection of high yielding genotypes under normal and stress conditions. For the assessment of genetic diversity, molecular markers have been found to be generally superior to morphological markers, pedigree, heterosis and biological data (Melchinger et al., 1991). The genetic diversity is commonly assessed by genetic distance or genetic similarity. Among the DNA markers, microsatellites are the most widely used for many purposes such as diversity, genome mapping, varietal identification, determination of the genetic relationship between several sub-species etc. (Ma et al., 2011). The objective of the present study is to assess the extent of correlation and genetic similarity among rice accessions grown in Sudan and South Sudan to be used as parents for future breeding program.

A total of 18 rice accessions native to Sudan and South Sudan as well as other 13 genotypes from International Rice Research Institute (IRRI) gene bank were used in this study (Table 1). DNA was extracted from the leaf samples of 14 day old seedlings planted in the green house at IRRI-Philippines using the modified Miniprep Protocol of Thomson et al. (2006). The DNA was quantified using a Thermo Scientific NanoDrop ND -2000/2000C spectrophotometer (Thermo Fisher Scientific, USA). A total of 588 markers were used for the genetic diversity analysis. The motifs for these markers can be found in a public domain (http://www.gramene.org/markers/microsat/). 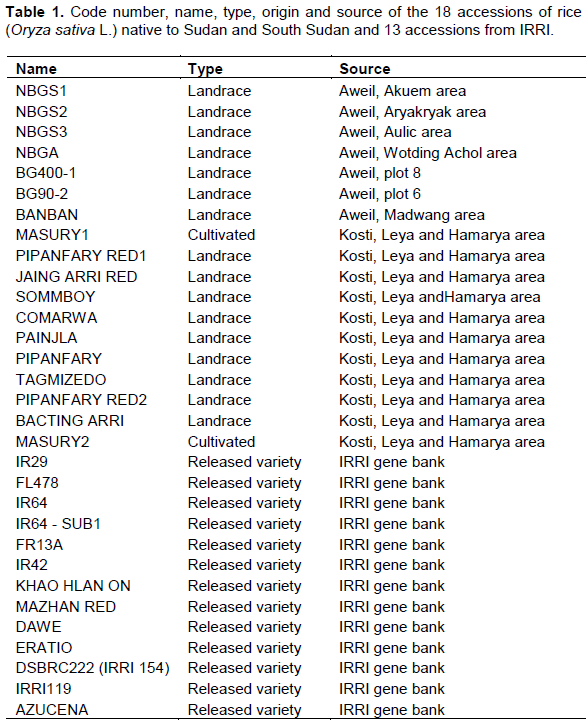 The polymerase chain reaction (PCR) was carried out using the SSR Programmable Thermal Cycler (MJT55L.scr) as modified by Thomson et al. (2006). The polymerase informative content (PIC) was calculated for each SSR marker as described by Anderson et al. (1993) as follows:

Where, Pij is the frequency of the jth allele for the ith  marker,  and is summed over n alleles.

Allelic diversity of the SSRs was calculated according to the diversity index ‘H’ as described by Nei (1987) as follows:

Where, Pi is the frequency of the ith of k allele.

Based on the DNA fragments, the clearly unambiguous bands were scored visually for their presence and absence with each primer. The scores were obtained in the form of matrix with ‘1’ and ‘0’ which indicates the presence or absence of bands in each accessions, respectively. SSR polymorphisms were measured in terms of major allele frequency, number of alleles per locus, gene diversity and PIC values using PowerMarker software (version 3.25; Liu and Muse, 2005). For the unrooted phylogenetic tree, genetic distance was calculated using the “C.S Chord 1967” distance (Cavalli-Sforza and Edwards, 1967) in PowerMarker with tree viewed using Tree view software.

Among the SSR markers used only 483 generated polymorphic patterns, and showed 1274 alleles in the 31 genotypes (Table 2), whereas primers with monomorphic banding patterns were excluded. The number of alleles per locus ranged from 2 (about 214 markers) to 5 (RM16820 and AP3206a), with an average of 2.64 alleles per locus. 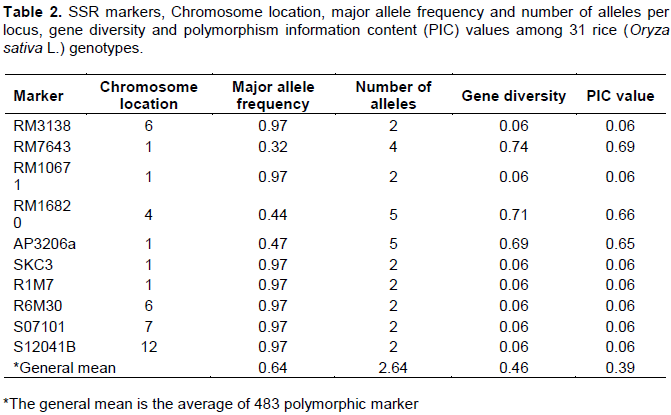 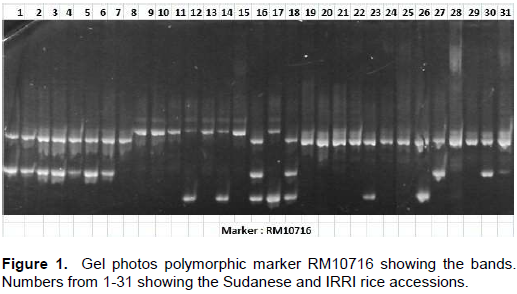 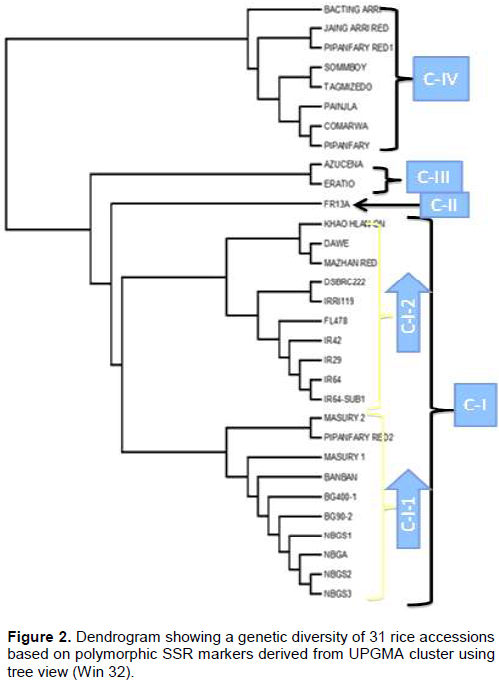 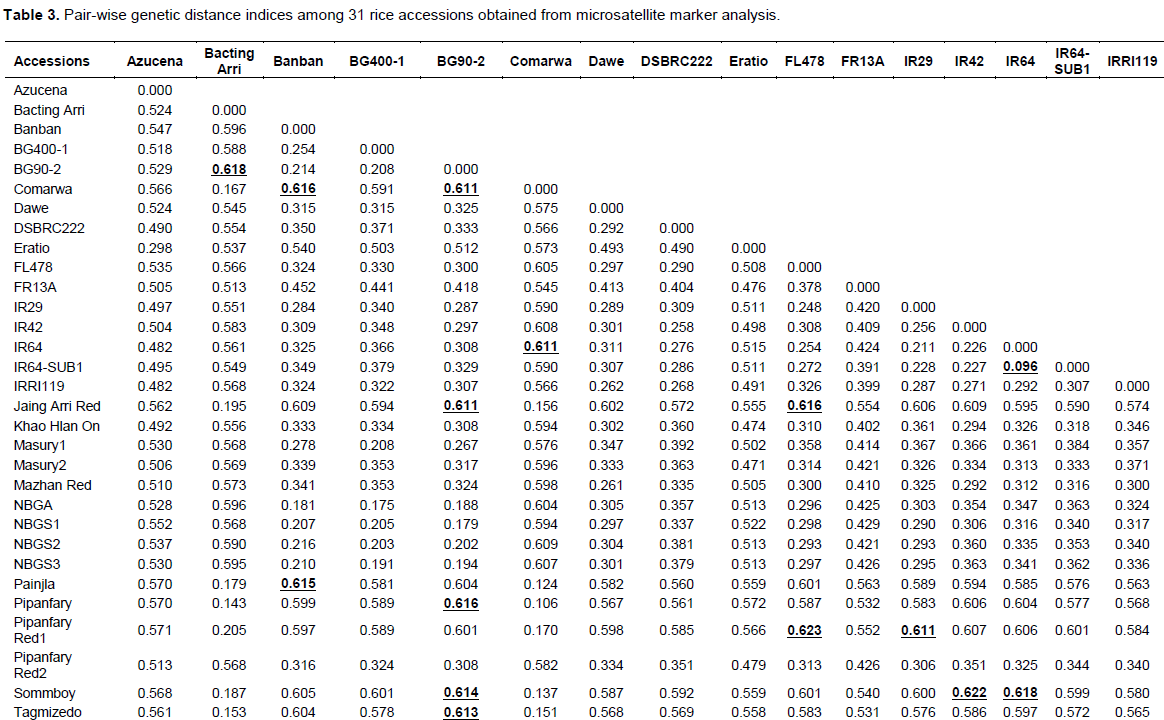 Genetic dissimilarity between the Sudanese rice accessions and IRRI genotypes was comparatively high. Therefore, SSR markers provide an adequate power of resolution to discriminate between the accessions and it could serve as a potential tool in the identification and characterization of genetically distant accessions from different sources.

The use of SSR markers to investigate genotypic variations among different genotypes was previously reported by some researchers (Sajib et al., 2012).

The mean alleles of 2.64  per locus detected in the present study was in accordance with the result of Wong et al. (2009) who achieved a value of 2.6 alleles per locus in analysis among 8 Barrio rice cultivars using 12 SSR primers and detecting a total of 31 alleles. Moreover, the result was in the range of 2.0-5.5 alleles per SSR locus for various classes of microsatellites as reported by Cho et al. (2000). However, our results were invariance to those reported by Sajib et al. (2012) and Hossain et al. (2012) who found 3.3, 3.57 and 3.8 alleles per locus, respectively in some rice genotypes. However, the number of alleles 2-5 obtained in this study was slightly lower than the results observed in previous diversity studies in rice genotypes (for example 3 to 9 alleles with an average of 4.53 alleles per locus (Hossain et al., 2007); 3-17 alleles with an average of 7.4 (Yu et al., 2003). Therefore, it could be concluded that the markers with the highest number of discernable alleles are the  best  markers for  molecular

characterization and diversity analysis. The variability existing in the number of alleles detected per locus in the present study might be due to the diverse germplasm used and selection of SSR primers with scorable alleles.

The average estimate of gene diversity (H) of 0.46 across 31 rice accessions, that was  reduced to 0.43 when the analysis was performed with only 18 Sudanese accessions is lower than the estimates of H=0.68 for the rice accessions (H = 0.68) reported by Yu et al. (2003) and that of 0.53 reported by Onaga et al. (2013). These results indicate that upland rice accessions grown in Sudan are not sufficiently diverse, although some differences in polymorphism information content (PIC) values were obtained. The SSR marker RM7643 that attained the highest PIC value of 0.69 and high gene diversity of 0.74 was highly informative and can be used for assessing the genetic diversity of rice accessions from Sudan. Hence there was a strong relationship between the PIC value and the number of alleles detected, in which markers that had higher PIC value also had higher number of alleles. This strong positive association between gene diversity of a SSR locus and the number of alleles detected was also reported by Yu et al. (2003) and Onaga et al. (2013). Therefore, confirming that SSRs analysis has a considerable potential for studying the genetic diversity of rice (Xu et al., 2004; Jeung et al., 2005). The level of polymorphism determined by the PIC value (mean = 0.39) in this study is lower than the reported PIC value in previous works (Borba et al., 2009; Upadhyay et al., 2011) who reported an average PIC of 0.6, 0.75 and 0.78, respectively. Evidently, this might be due to the lack of knowledge about diversification of rice accessions in Sudan and it is the first time to use these markers for genetic map of Sudanese rice landraces.

The genetic dissimilarity between the rice accessions was also determined using a dissimilarity matrix. Generally, modern rice cultivars share a relatively narrow genetic background, when compared to the unexplored vast variability existing in rice landraces worldwide. For example, the pedigree of maximum IRRI rice varieties can be traced back to few Indian landraces such as Kitchili Samba, Vellaikar, Tadukan, Thekkan and Eravaipandi (Khush and Virk, 2005). Therefore, it is important not only to conserve landrace genotypes, but also to obtain the gene-pool of rice landraces and unlock valuable genes for breeding purposes (Rabbani et al., 2008).

In the present study, the large range of similarity values for cultivars exhibited by microsatellite markers provides great confidence for the assessments of genetic diversity and relationships, which can be used in future breeding programme. Hence with the aid of microsatellite makers and clustering data, different distantly related rice genotypes may be combined by intercrossing genotypes such as Aweil rice genotypes with IRRI rice genotypes from different clusters to get hybrid varieties with high heterosis. Many studies have also reported significantly greater allelic diversity of microsatellite  markers  than  other  molecular   markers (Sajib et al., 2012; Hoque et al., 2014).

The genetic distance between the 31 rice accessions pairs that ranged from 0.04 to 0.62 indicated a high degree of dissimilarities between the accessions. The high genetic dissimilarity between Aweil accessions and Kosti accessions is an evidence that their source of origin is different from that group of Kosti, and narrow genetic distance among Aweil accessions and also among Kosti accessions may be due to the lack of genetic diversity and they were collected from the same environment. These findings are supported by the report of low genetic diversity for Japanese, Korean, and Venezuelan rice germplasm (Song et al., 2002; Hashimoto et al., 2004; Ghneim et al., 2008). Narrow genetic base of cultivated rice varieties was also reported in other regions, including Latin America (Aguirre et al., 2005) and USA (Xu et al., 2004) and Chile (Becerra et al. 2015). The narrow genetic base observed in this study is not surprising and it could be due to the fact that only a few varieties are available in the country. In addition, several cultivars are named locally and could have arisen through field out-crossing and farmer selection over the years. Thus, one might expect that genetic diversity was on one hand, enhanced by mutation and meiotic recombination, and nonetheless as suggested by Hartl and Clark (1997) curtailed by genetic drift and natural and artificial selection.

The four main clusters of UPGMA analysis in the 31 rice accessions of the present study is unlike the cluster grouping of Sajib et al. (2012) who found five clusters for aromatic landraces, and that of Onaga et al. (2013) who found three main clusters for IRRI and Ugandan rice cultivars, and Prabakaran et al. (2010) who reported six clusters for other rice landraces. The wide variability existed in this study, between the thirty-one genotypes as revealed by the microsatellite markers provides greater confidence for the assessment of genetic diversity and relationships, which may be useful in marker-assisted selection in breeding programme.

From the results it could be concluded that the DNA fingerprinting and genetic diversity of Sudanese rice accessions using SSR markers is effective. The information about the genetic diversity will be useful for proper identification and selection of appropriate parents for breeding programme including gene mapping, and  ultimately for emphasizing the importance of marker assisted selection (MAS) in Sudanese rice improvement.