A trial was conducted to determine the correlation between grain yield and agronomic parameters of 90 F1 early maturing maize hybrids in 2012 in Fumesua, Ejura and Kpeve; representing the Forest, Forest-Savannah Transition and Coastal- Savannah Transition zones of Ghana, respectively.  The objective of the work was to determine the correlation between grain yield and other agronomic parameters of maize across three locations. Randomized Complete Block Design (RCBD) with two replicates was used for each location. Results from the correlation analysis revealed that grain yield was significantly and positively correlated with plant height (r = 0.633), cob length (r =0.610) ear height (r =0.410), and cob diameter (r = 0.401). However, there were nonsignificant correlation between grain yield and days to silking. Nevertheless, among agronomic traits, ear height, plant height seed length, seed diameter, cob length and cob diameter were positively and significantly correlated, indicating that increase in any one of these traits could lead to increase in the other. It was recommended that hybrids that showed the highest correlation with grain can be selected to improve grain yield.

Maize (Zea mays L.) is the most widely grown cereal in the world, and it is the third most important cereal crop after wheat and rice which serves as a primary staple food in most developing countries (Khalil et al., 2011; Badu-Apraku et al., 2010; Obeng-Bio, 2010). The maize plant has wider adaptability hence can be cultivated in different growing conditions from latitude 58°N to 40°S, below sea level and at altitude higher than 3000 m, and in areas with rain-fall of about 250 to 5000 mm per annum and with growing season ranging from three months to about 13 months (Golam et al., 2011). Its high yield potential, wide adaptability, relative ease of cultivation, processing, storage and transportation has increased its potential for combating food security challenges posed by population increase and changes in climatic conditions due to global warming in West and Central Africa (Badu-Apraku et al., 2010).
Maize is grown in approximately 25 million hectares in Sub-Saharan Africa, largely by subsistence farmers that produced 38 million tons in 2005 to 2008, primarily for food (Smale et al., 2011). From 2005 to 2008, maize represented an average of 27% of cereal area, 34% of cereal production and 8% of the value of all primary crop production (FAO STAT, 2014; Smale et al., 2011). In Ghana, maize is the highest ranking cereal in terms of production and consumption followed by rice (Twumasi-Afriyie et al., 1992). The domestic demand is growing because it serves as a major source of daily calories and dietary protein for most people who are under privileged, since poverty makes it difficult for such people to afford meat (MiDA, 2006). According to a MOFA (2006) annual report, maize accounted for 50 to 60% of total production area of cereals with average yield approximately at 1.6 metric tons per hectare, but yields as high as 4.5 to 5.0 metric tons per hectare can be realized by farmers using improved seeds and good management practices.

Research location
The experiment was conducted in three agro-ecological zones of Ghana. The locations where the experiment was conducted were different in mean seasonal rainfall (Table 1). Fumesua lies in the Forest ecology zone of Ghana. Ejura lies in the Forest –Savannah Transition ecology and Kpeve lies in the Coastal-Savanna Transition. The three experimental sites experience a bimodal rainfall pattern. The major season stretches from April through July, and the minor season from August to November (Table 2). 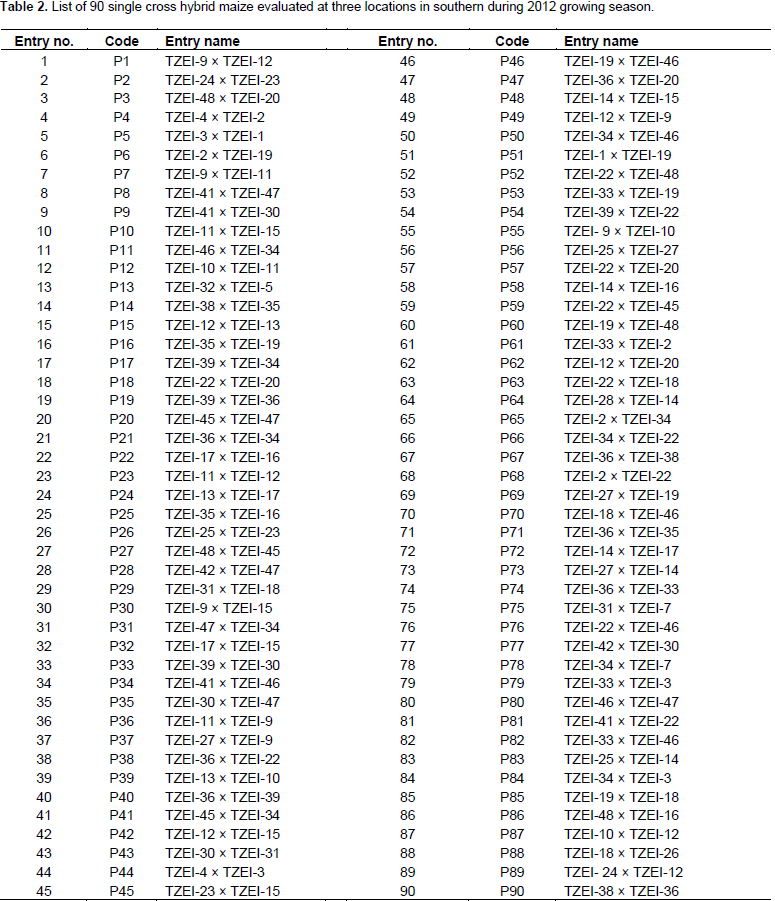 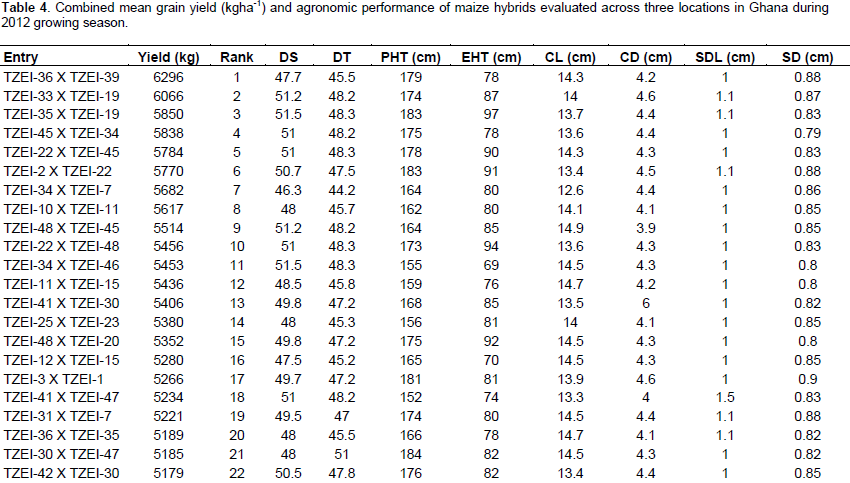 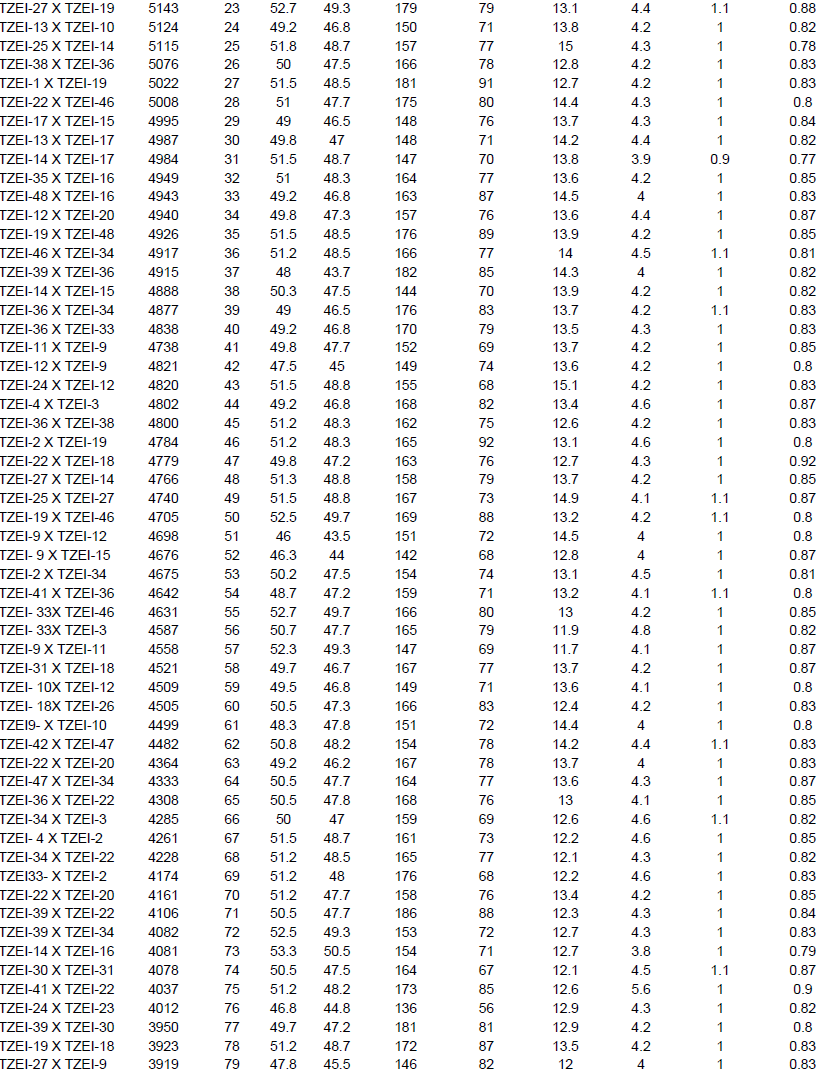 The associations were highly significant (p < 0.001). This indicates that improvement on any of these characters could help improve grain yield. Similar results were reported by Bocanski et al. (2009) and Malik et al. (2005). They observed high and positive correlation between grain yield and plant height (r = 0.953), ear height (r = 0.867), and cob length (r = 0.959). Meanwhile, days to silking has no significant correlation with grain yield, plant height, seed length, seed diameter, cob length and cob diameter. This result is in agreement with Golam et al. (2011), who reported that grain yield and plant height did not correlate with days to silking. However, among agronomic traits, ear height, plant height, seed length, seed diameter, cob length and cob diameter were positively and significantly correlated, indicating that increase in any one of these traits could lead to increase in the other.
Ear height significantly correlated with plant height seed length, seed diameter, cob length, and cob diameter. The strong correlation between ear height and plant height with grain yield suggested that tall plants with high ear placement gave better yields compared to the shorter plants with lower ear placement. This could be attributed to the high dry matter accumulation function carried out by the high number of leaves possessed in the case of tall plants (Al-Tabbal et al., 2012). There were negative correlations between ear height and days to silking and days to tasseling (r = - 0.369 and r = - 0.332). This result is in agreement with that of Malik et al. (2005). The negative correlation indicates that increase in days to silking and tasseling could indirectly reduce yield through stalk and root lodging (Malik et al., 2005).
Plant height had low correlation with days to silking, but highly correlated with ear height (r = 0.668), days to tasseling (r = 0.10692), seed diameter (r = 0.2204), cob length (r = 0.4568), cob diameter (r = 0.3989) and seed length (r = 0.3396).  This result indicates that increase in plant height could lead to increase in these characters which could result in yield increase, since plant height has been observed to be controlled by the expression of many genes and the interactions between these genes (Bello et al., 2012). Therefore, traits that positively contribute the highest correlation with grain yield such as plant height, cob length, and ear height and cob diameter can be chosen as superior characteristics to help improve maize grain yield (Table 5).