Impact of row spacing on soybean morphological parameters and yield

The variable distribution of soybean seeds in rows can reduce the final stand and compromise grain yield. This article assesses the impact of seed distribution on the morphological characteristics of some plants and on the final yield of soybeans. The study was carried out in the experimental area of ??the federal university of Santa Maria, Frederico Westphalen campus, in the state of rio grande do sul, Brazil, in a randomized block design with five treatments and four repetitions. The size of the spacing between plants in the line constituted the variation factor and spaces of 0 (without space); 7.7; 15.4; 30.8 and 61.4 cm were evaluated. The evaluated parameters were plant height; main stem diameter; number of lateral branches; fruit per plant; insertion height of the first legume; number of viable nodes in the main trunk; number of viable nodes in the lateral branches and final grain yield. The spacing between plants in the rows increases the number of side branches, the number of nodes in the side branches and the number of fruits per plant, and spacing of up to 61.6 cm does not compromise the final soybean productivity.

The soybean culture [Glycine max (L.) Merril] stands out for being among the most important commodities in the world over the past few years, with Brazil responsible for 32% of the global production of these grains (FAO, 2020). In this context, the search for increased grain yield of the crop is constant, with the current average yield being around 3 Mg ha −1, far from the attainable yield of 6 Mg ha −1 (Tagliapietra et al., 2018).

Crop productivity is defined by the interaction between plants, the production environment and management. Among the management practices, choice of cultivar, sowing time, spacing and density of sowing are some factors that influence the components of production and, consequently, the final productivity of the crop. The maximization of grain yield is also associated with better spatial distribution of plants, reflecting on the increase in intercepted solar radiation and minimization of competition between plants (Fantin et al., 2016).

Seeds evenly distributed in the line can increase grain yield through the improved use of environmental resources, such as solar radiation, temperature, photoperiod and atmospheric CO2 atmosférico, combined with the reduction of stresses related to the limitation of water and nutrients (Tagliapietra et al., 2021). In the establishment of soybeans, when there is a reduction in planting density, Ferreira et al. (2018) postulate that they tend to produce a greater number of branches, more pods and, consequently, an increase in production per plant; compensating for this spacing in the stand, in view of the high density, in which plants have fewer branches and plant production depends only on the main root.

The spacing between rows is associated with numerous factors, linked to the quality of seeds and sowing, in addition to the damage caused by pests and diseases. When problems occur in the process of sowing and attacking pests during the emergence and establishment of the crop, the plants are eliminated, causing spaces, and the plants located at the edges of these spaces’ present different conditions, adapting to better occupy the space, presenting high phenotypic plasticity. The equidistant distribution of plants in rows can reduce competition between soybean plants and increase grain production per individual plant (Balbinot et al., 2015).

The hypothesis is that, in this context, management practices of this nature are fundamental in the search for increased grain productivity, since technicians and producers question the compensatory capacity of soy in relation to grain productivity and the spacing between rows. Thus, the objective was to evaluate whether the lack of plants in the sowing line affects the morphology and the final productivity of the soybean crop.

The experiment was conducted at the Federal University of Santa Maria, Frederico Westphalen campus, in the Médio Alto Uruguai region, 27°23'51'' South and 53°35'19'' west of the state of Rio Grande do Sul, Brazil, at an altitude of 490 meters. The soil is classified as Typical Dystrophic Red Latosol, clayey, deep and well drained (EMBRAPA, 2006). The Köppen classification of the region’s climate is humid subtropical (Cfa) (Moreno, 1961), with an average rainfall of 1,881 mm and an average temperature of 19.1°C.

As a soil cover, preceding the sowing of soybeans, there was the cultivation of black oats (Avena strigosa Schreb) and forage turnip (Raphannus sativus). Fertilization followed the soil analysis report, based on the recommendations of the CQFS RS / SC (2016), and the phosphate was applied in the row at the time of soybean sowing, using triple superphosphate as raw material, with potassium chloride applied right after sowing.

Meteorological data for the field experiment period were obtained from the weather station at the National Institute of Meteorology (INMET), on the UFSM campus in Frederico Westphalen, Rio Grande do Sul State.

The experimental units consisted of six rows, spaced at 0.45 m from each other, five meters long. Sowing was performed on November 16, 2017, and plants that established the spaces were thinned in every line for each plot, two weeks after the emergence and establishment of seedlings on December 1, allocating treatment to the experimental units. The DM 5958 RSF IPRO genotype was used in this study, with an undetermined growth rate and ripening group of 5.8, with mechanized sowing at a depth of 3 to 5 cm on November 16, 2018.   The seeds used were inoculated with Bradyrhizobium japonicum, at a proportion of 300 ml/100 kg of seeds. The seeds were treated with Cropstar insecticide (400 ml/100 kg seed) and Vitavax Thiram fungicide (300 ml/100 kg of seed). For the other phytosanitary management purposes (weeds, insect pests and diseases) the Technical Recommendations for soybeans in the States of Rio Grande do Sul and Santa Catarina were followed (Salvadori et al., 2016).

Two central sowing lines with three meters in length of each plot were harvested manually (2.7 m²) to evaluate grain yield, the grain volume being weighed and transformed into kg ha-1 with a humidity correction of 13%. The data collected were subjected to variance analysis (ANOVA), followed by the Scott-Knott test (Scott and Knott, 1974) to compare means, with 95% reliability, using Sisvar 5.6 software (Ferreira 2011).

Figure 1 shows that the maximum and minimum temperatures between 11/16/2017 and 03/22/2018 were between 20 and 30ºC, with no thermal oscillations that could compromise crop development and its genetic potential. Likewise, for rainfall, there is no water deficit in the crop cycle. The accumulated precipitation in the soybean cultivation period was 632.8 mm, within the volume Matzenauer et al. (2003) recommended for soybeans, at between 450 and 800mm per cycle, depending on the climate, crop management and cycle duration to maximize grain yield. 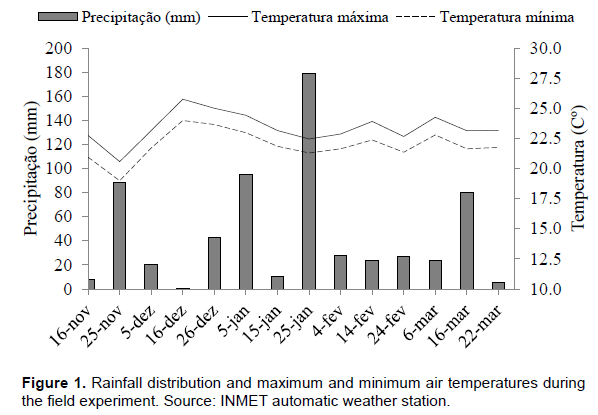 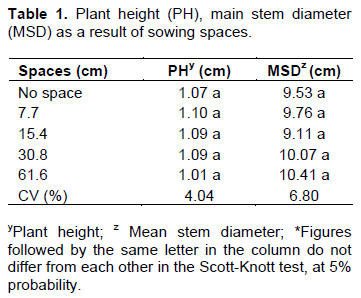 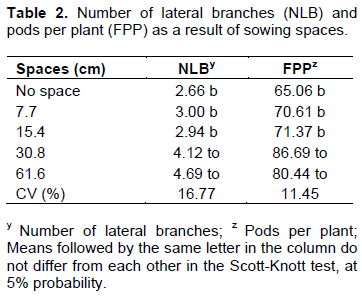 Likewise, there were significantly more pods for the two largest spaces in comparison with other treatments, which are explained by the greater number of lateral branches, as discussed above. This may also be associated with greater conversion of solar radiation into photoassimilates, allowing the lateral branches to flower and produce grain, which can also explain the phenotypic plasticity of the soybeans. Comparing the control with increased plant spaces in the sowing row, there was an increase of 33 and 24% in pods, respectively, for 30.8 and 61.6 cm spaces. This was observed by other authors (Pinto, 2010; Junior et al., 2018), and they all say pod per plant is one of the components that contribute directly to offsetting plant shortages or population reduction in soybean crops.

Regarding the height of the first fruit on the main stem (Table 3), there was no significant response to the treatments, which can be attributed to the fact that the population recommended for the cultivar was used, which did not stimulate the etiolation that usually occurs when there is competition between plants for a factor, such as luminosity (Lima et al., 2012). Similar responses were observed by Rezende et al. (2004) when evaluating certain plant parameters associated with population density, with populations ranging from 300 to 700,000 plants ha-1. 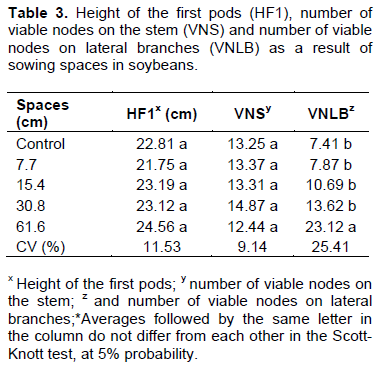 With regard to the variable number of viable nodes on lateral branches (NNLB), Table 3 shows an increase in this variable with the progressive increase in spaces but without differing significantly for spaces smaller than the spacing between crop lines. For the largest space (61.6 cm), there is a 212% increase in the number of viable nodes in relation to treatments without spaces, differing significantly from the other treatments. This response to the largest space can be attributed to the larger number of lateral branches in this treatment, stimulating the emission of reproductive nodes; it converts intercepted radiation into flowers and grains. This is because the fruit volume is directly related to the emission of flowers and the percentage of these that develop until the final fruit phase (Basso et al., 2016).

For grain yield (Table 4), there was no significant difference between the treatments. This can be attributed to the high capacity of the cultivar in altering its morphology and its yield components when in free space, adjusting components such as the number of lateral branches; pods per plant; number of reproductive nodes on the lateral branches, and fruit on the lateral branches. This feature of soybean, modifying morphology to the area available for growth and development, was also reported by Nakagawa et al. (1986) and Heiffig-del Aguila et al. (2005); both concluded that soybeans compensate for population reductions without decreased productivity, unlike what was observed by Tourino et al. (2002) and Heiffig et al. (2006), who concluded that grain yield increases in line with plant population. The data found in the literature are contradictory, but factors such as weather, soil  type,  cultivar growth habits and experiment site can directly influence the results. The cultivar used in this study has a lot of potential for branching, undetermined growth and ripening group 5.8, factors that allow it to express its genetic potential, explaining the data presented here. Although the soybeans compensated for sowing spaces, for the variable productivity showing no significant difference, there was a gradual reduction in productivity with the increase in spacing because the control (no spaces) produced 202.5 kg.ha-1 more than 61.6 cm spacing; that is, larger spacing reduced productivity by 4% in comparison with the control (Table 4). 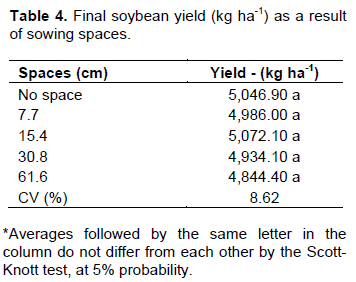 It is important to note that the data presented in this study are valid for the studied genotype and materials with the same ripening group, and that a number of factors influence the morphological and reproductive characteristics of the crop. Other studies should be conducted, evaluating soybean responses to sowing spaces with early cycle cultivars and at a preferred sowing time, such as winter soybeans and/or early sowing, as posited by Basso et al. (2016). According to the same author, it seems clear in a study along these lines and the study herein that, while not significant from a statistical point of view, plant spacing in rows above the spacing between crop rows reduces the final soybean yield.