The data used in the analysis was collected in Central and Eastern regions of Kenya, which are the leading French beans producing areas in the country. About 90% of the total national French beans output is produced by smallholder farmers in these regions under increasing challenge of climate effects. A higher proportion of French beans farmers in these areas are also complying with Global-GAP policy to enhance their export market access. The integrated farm management practices and technologies promoted under Global-GAP policy in these areas are also assumed to be climate change adaptation related, targeted at reducing vulnerability and improving agricultural production potential (Government of Kenya, 2010b; Amekawa, 2009). The study interviewed a random sample of 616 Global-GAP complying and non-complying farmers using a semi-structured questionnaire.
The number of smallholder French beans farmers interviewed from each region  was arrived at using proportionate to size criteria.Multistage sampling was used to select the counties, sub-counties, wards and the villages from which farmers were selected. Systematic random sampling was used to select farmers to be interviewed in each of the selected region. Only household decision maker/spouse was interviewed. Data collected included information on Global-GAP compliance, weather related risks and adaptation strategies applied by farmers. Factor analysis and logistic regression methods were used to analyze data. Descriptive statistics such as mean and percentages were generated using Statistical Package for Social Scientists (SPSS). Factors affecting adoption of adaptation strategies were analyzed using Limdep software.
Assessment of prevailing climate change adaptation strategies
The study modelled climate change adaptation in smallholder French beans farming on technology adoption theory since adaptation to climate change in agriculture is mostly through, adoption of appropriate technologies (Gbetibouo, 2009). The models were based on farmers’ utility and profit maximizing behaviors. The study identified underlying climate change adaptation strategies, applied by the farmers using factor analysis. This was used to reduce large numbers of observed farmers’ variables to fewer underlying dimensions, viewed as a more authentic measure of that factor (Helena et al., 2000; Sarbu and Pop, 2005).
To ensure that all the variability in the observed variables was used, the study applied the principal component analysis (PCA) as the data reduction method during the factor analysis (Lwayo and Obi, 2012). In addition, the study used Likert scale to find out the general clustering of variables for explanatory purposes, under the believe that variable correlation is less than 0.6 (Kim and Mueller, 1987). The principal components were ordered in such a way that, the first component accounted for the largest possible amount of variation in the original variables, the second component accounted for the maximum that was not accounted for by the first and was completely uncorrelated with the first principal component (Rao,1964). The computation of the principal component was as follows:

Where PC1 is the first principal component, a1k is the regression coefficient for the kth variable that is the eigenvector of the covariance matrix between the variables, and Xk the kth variable. Since key climate change adaptation strategies of the farmers were derived from actual observed data, assumption was made in the study that, there was no difference in adaptation strategies used in the two study regions. Further assumption was made, climate change adaptation measures was an “aggregate of indicators”, then adaptation strategies of French beans smallholder farmers aggregated region-wide reflected factors that speak to the  complex latent measures used by farmers to adapt to climate change in the two regions. For this purpose, data for all farmers’ responses across the region were combined for each region. The farmers gave their responses on the measures adopted for climate change adaptation on the Likert scale of one to three (where 1 = disagree, 2 = unsure/neutral, and 3 = agree).
The adaptation strategies tested include twelve items. The 12 items include: changing crop variety, building a water harvesting scheme, planting shaded trees, irrigating more, changing from crop to livestock, increasing number of livestock, reducing the number of livestock, migrating to another area, finding off-farm jobs, leasing their land, buying insurance and investing in soil conservation techniques. These were reduced using PCA while still reflecting a large proportion of the information contained in the original dataset. The data was screened to ensure no outliers and the minimum amount of data for factor analysis was satisfied for each group with a sample size of 307 for the eastern region farmers and 309 for central region farmers. All the variables analysed satisfied several well-recognized criteria for factorability of correlation. The Kaiser-Meyer-Olkin measure of sampling adequacy considered was above the threshold of 0.5 and any value below 0.5 was considered miserable according to Everitt and Hothorn (2011). The Bartlett’s test of sphericity for the two regions was done at 1% level of significance. The varimax rotation which is a form of orthogonal rotation strategy was used since there was no relationship between the components.
Assessment of the influence of Global-GAP policy on farmers’ climate change adaptation strategies decisions
The study assumed that use of identified adaptation strategies was influenced by socio-economic factors among them Global-GAP policy compliance. Other factors deemed to influence adoption of modelled adaptation strategies which were based on literature review and included respondents' socio-economic and institutional factors (Nhemachena and Hassan, 2007). The dependent variable was binary (1 if farmer used identified adaptation strategies, 0 otherwise). The climate change adaptation strategies function for smallholder French beans farmers was specified as:

The proportion of variance accounted for by the component soil conservation was 22%. Farmers were investing in soil conservation techniques to facilitate adaptation to changes in rainfall. They also planted shaded trees, changed crop variety and found off-farm employment, towards addressing effects of changes in rainfall. The second factor leasing out land, explained 17% of the variance. French beans farmers in Central region leased out land, migrated production activity to other areas and changed from crop to livestock as solutions to the recurrent problem of changes in rainfall. The proportion of variance accounted for by the third factor water harvesting was, 13%. Farmers  built  a  water harvesting scheme in Central region to reduce the effects of challenges occasioned by changes in rainfall.
In Eastern region, three components representing major prevailing climate change adaptation strategies were, extracted from the farmers’ responses. These contributed about 55% of the variance. Based on the items loadings, the component factor one was named leasing out of land, two changing crop variety, and three soil conservation strategies (Table 3).

Principal component one, leasing out of land, explained 26% of the variance. Under this strategy farmers were respectively leasing out their land, migrating production activity to other areas, changing crop variety and increasing number of livestock to cope with the adverse effects. Principal component two, changing of crop variety  contributed  18% of the variance.Through this strategy, farmers were changing crop variety by reducing the number of livestock and building water harvesting scheme, to cope with the effect of changes in rainfall. The proportion of the variance explained by principal component three has soil conservation of 11%. The specific items that improved this factor were respectively planting shaded trees and finding off-farm jobs for income.
The study results showed that, soil conservation and leasing out of land were the common climate change adaptation strategies applied by smallholder French beans farmers in both Central and Eastern regions to cope with the effects of changes in rainfall. While water harvesting was more common in central, change of crop variety was more common in Eastern region, as an adaptation strategy to cope with changes in rainfall.
Adaptation strategies to changes in temperature
Regarding responses to changes in temperature, three principal components were extracted in Central and four Eastern regions. These components represented the major adaptation strategies to changes in temperature used by smallholder farmers in the two regions. The extracted principal components in Central region contributed 46% of the variance. Based on the items loadings, the component factor one was named off-farm employment, two water harvesting and leasing out land strategies (Table 4). 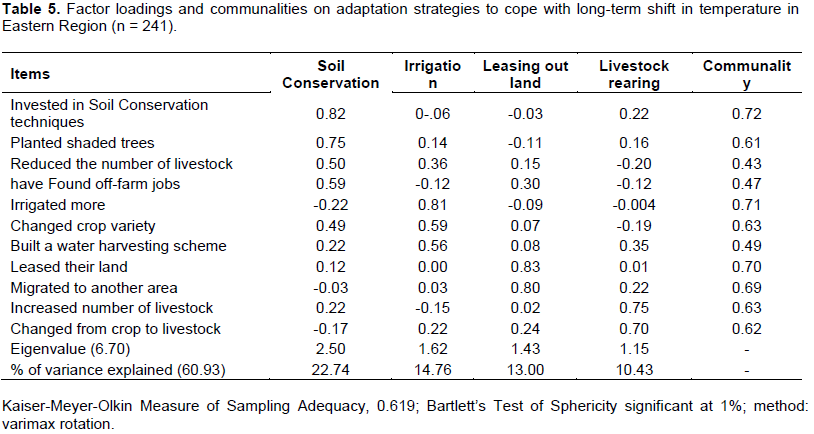 The study results revealed that the common climate change  adaptation  strategies  used in the two regions in response to changes in temperature was leasing out land. While off-farm employment and water harvesting strategies were common in central region, soil conservation, irrigation and livestock rearing were common strategies to farmers in Eastern region. The distinct feature revealed by these results was that, smallholder French beans farmers’ intention with the prevailing adaptation strategies seems to be in line with those found by other studies. As highlighted by Chiotti et al. (1997) and de Loë et al. (1999), these farmers change crop varieties to the ones that are recommended for higher drought or heat tolerance to increase farm efficiency in circumstances of changing temperature and moisture stress. They also change from crop production to livestock rearing that may tolerate increased changes in climatic conditions (Delcourt and Van kooten, 1995). These farmers seem to undertake soil conservation practices as an adaptation strategy in order to conserve moisture and nutrients (Hucq et al., 2000). Implementing irrigation practices and water harvesting are aimed at, enhancing the production under climate related changes to ensure continued economic benefits (Klassen and Gilpen, 1998). Looking for off-farm employment and leasing out land are employed by farmers to diversify income sources to reduce vulnerability to climate related income loss (de Loe et al., 1999). These strategies should therefore be considered by stakeholders in efforts to enhance adaptation to both changes in rainfall and temperature in the study area.
Factors influencing farmers’ adaptation strategies
The study analyzed   the   influence  of  socio-economic factors such as Global-GAP policy compliance on the identified climate change adaptation strategies. The results of the maximum likelihood-binary logit estimates for factors influencing adoption of the identified adaptation strategies are presented in Table 6. 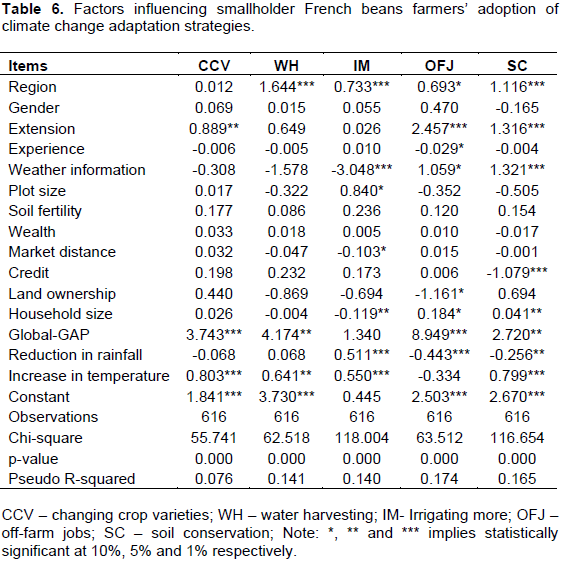