Field evaluation of cowpea varieties for adaptation to the forest/savanna transition agroecology of Osun state, Nigeria

Cowpea (Vigna unguiculata [L.] Walp) is an important food legume in tropical and sub-tropical Africa. It is grown for food, fodder, a cover crop and consumed as dried seeds rich in carbohydrates, proteins and vitamins. Production of cowpea has not been practiced on a large scale in the forest/savanna transition agro ecology of Nigeria due to high relative humidity, diseases and insect damage. In 2012 and 2013 cropping seasons, twelve cowpea varieties were assessed on the field for their adaptation to the forest/savanna transition agroecology of Osun State Nigeria. Three foliar diseases (cowpea bacterial blight disease, cowpea mosaic diseaseand cowpea leaf spot disease) and level of insect damage on leaves were observed under natural infections. At sixty days after sowing (60DAS), all cowpea varieties tested showed varying degrees of infections by cowpea bacterial blight disease, cowpea mosaic disease, cowpea leaf spot disease and insect damage. Number of flowers produced per plant per week was not significantly different (P≤0.01) among the varieties. Variety sample 5 showed the least level of infection by the three foliar diseases while the number of pods produced per plant per week was highest in TVX 3236 and least in Dan Borno (88 DAS). Insect damage was least in sample 6 and TVX 3236 but highest in sample 7. Proper management of these three important foliar diseases will enhance the production of some of the promising varieties in the forest/savanna transition agroecology of Osun State.

Cowpea (Vigna unguiculata [L.] Walp) is an important grain legume in the tropics and is cultivated for grain, leaves and green pods (Quin, 1997; Awurun and Enyiukwu, 2013). It is also a source of  quality  protein  as well as a cash crop for most West and Central African farmers (Langyintuo et al., 2003). It serves as a significant dietary compliment in developing countries of Africa, Latin America and Asia (Philips et al., 2003). Nigeria is the highest producer of the crop (IITA, 2001) and it can be grown under various production systems such as rain-fed, irrigated, and areas with low rainfall (Singh et al., 1997). One of the major constraints to cowpea production is the effect of pests and diseases induced by different groups of pathogenic organisms (fungi, bacteria, viruses, nematodes) and parasitic flowering plants thereby causing seed rots, seedling mortality, stem and root decay, foliar diseases and deterioration of seed quality (Hampton et al., 1997; Agbicodo et al., 2010; Adegbite and Amusa 2008).

Cowpea is one of the most widely adapted and versatile cultivated grain legumes (Gibbon and Pain, 1985). A vast number of high-yielding and or disease tolerant varieties have been released by research institutes in Nigeria such as Institute of Agricultural Research, Zaria (IAR). The performances of these varieties may be location dependent and virulence of pathogens may also be influenced by the environment. In addition, majority of cowpea varieties consumed in South West Nigeria are produced in savanna zone of Nigeria (FAO, 1999). The study was undertaken to assess the adaptation of some cowpea varieties released by the Institute of Agricultural Research Samaru to the forest/savanna agroecology of Osun state in South West Nigeria in terms of foliar diseases and insect damage.

The experiment was conducted during the cropping season of 2012 and 2013 at the Bowen University Teaching and Research Farm, Iwo, Osun State Nigeria. The crops were established during the late planting season of 2012 and early planting season of 2013. The soils are friable, deep and rich. The soil pH is slightly acidic with a sufficient amount of soil organic matter and soil organic carbon (Salami and Sangoyomi, 2013). The mean annual temperature ranges from between 21 and 32°C. There are two rainfall peaks in June and September with dry spell in August which produces the bimodal rainfall pattern in southwestern Nigeria. The dry season runs from early November to the end of March or early April, while the wet season is from end of March or early April to about middle of November. The average annual rainfall is 1279 mm. Relative humidity is high and ranged between 60 and 90% at 16.00 h (Adeyolanu et al., 2015). Twelve cowpea varieties were planted in 5 × 4 m plots with 1m space between rows and 30 cm within rows in four replicates and two seeds were planted per hole. A local variety that is popularly grown in the region was also planted as a check. Imidazolinone-based pre-emergence herbicide (Bush fire - Jubaili Company, China) was sprayed onto the plots immediately after sowing and subsequently. Insecticide (Lambda-Cylalothrin 2.5 EC insecticide; Marshall - FMC Chemicals Corporation, USA) was sprayed at two-week interval to control cowpea aphids. Data on incidence and severity of three foliar diseases (bacterial blight disease, cowpea mosaic virus disease, leaf spot) and insect damage were taken separately at 7 days interval from 60 to 88 days after sowing. A disease rating scale of 1 to 10 of which; 1 means no symptom and 10 means highly susceptible (death of plant) was used to estimate disease severity (Brinkerhoff, 1977). The scale was used to measure 20 plants per row of the 3 middle rows in each replicate. Data were also taken for number of flowers/pods produced per plant per week. Data were analysed using SAS software (SAS, 2006). Means for the pooled data were compared using the Duncan Multiple Range test.

The eleven cultivars and a local variety used as a check were all affected by cowpea bacterial blight. The severity was generally low in all the varieties at 60 and 67 DAS but least in sample 4 at 60 DAS (1.25) and highest in Dan Borno (2.50), there were no significant differences among all varieties tested at 67 DAS however; sample 7, 9 and 10 had the least disease severity rating. At the end of the assessment period (88 DAS), disease severity was lower in sample 5 and 6 (Table 1). Results on the effects of cowpea mosaic disease on the 12 varieties were not significantly different from each other at 60 and 67 DAS but, TVX 3236 had the least rate of infection for the two time periods (1.5 and 2.06, respectively). The local check had the highest severity at 60 DAS (2.50) while sample 2, 8 and 10 had the highest severity rating at 67 DAS (3.00) (Table 2). At 88 days after sowing, there were no significant differences between the varieties and the local check, although, the highest disease severity was observed in samples 7 and 8 (6.75) and least in sample 5 and the local variety (Table 2).

Production of flowers and or pods per week increased consistently throughout the period of assessment (Table 4a and b). Sixty days after sowing, sample 2 gave the highest number of flowers while the local check gave the least and at 88 DAS, sample 2 and TVX 3236 had the highest number of flowers per plant per week (4.0). Production of pods per week was highest in TVX 3232 at 88 DAS and lowest in Dan Borno (2.50) sample 2, 4, 5, 6, 7, 8 and 10 produced more pods per week per plant than the locally cultivated variety in the region (Table 4b). Insect damage was mild in all varieties at 60 DAS but increased thereafter (Table 5). Sample 7 had the highest level of insect damage consistently throughout the assessment period while sample 2, 6, 10 TVX 3236, Dan Borno and the local check did not differ in their responses to insect damage. 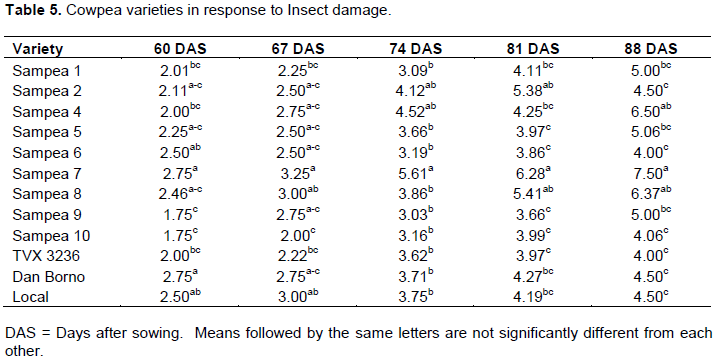 Major foliar diseases of cowpea observed in the forest/savanna agroecology of Osun state include bacterial blight disease, cowpea mosaic virus disease, and leaf spots. Their severities increased over time and at the end of production 40 to 50% leaf area have been damaged. These diseases have been reported to cause severe yield losses in the humid agro ecologies of Nigeria (Adegbite and Amusa, 2008; Emechebe and Florini, 1997) and more research efforts should be geared towards their detection and management especially before  visible  appearance   of   symptoms.   Planting   of cowpea varieties that show some levels of tolerance to the diseases would be more attractive to farmers as means of ameliorating the effects of diseases on cowpea on the field. Variety sample 5 showed the least level of severity to cowpea bacterial blight, cowpea mosaic disease and leaf spot. Samples 6, 8 and 9 would also be good compliments to cowpea production as they performed better than the local check in terms of cowpea bacterial disease which is the major production constraint (Nandini and Shripad, 2015). The low severities of insect damage and higher number of flowers and pod production per week per plant in TVX 3236 are a good indication of adaptability to the forest/savanna transition Agroecology of Osun State. The performance of any variety that shows some closeness to the local check that is adapted and grown by farmers in a particular locality is an indication of possibilities of adaptation. Improved cultivation of many cowpea varieties in the south west Nigeria will enhance food security and sustenance.

The study suggests the prospects of growing some of the cowpea varieties released by Institute of Agricultural Research (IAR) and the International Institute of Tropical Agriculture (IITA) in the savanna/forest transition agroecology of Osun state, Nigeria. In terms of foliar disease infections, samples 5, 6, 8 and 9 performed better than the local variety (check) in that order while TVX 3236 was the most resistant to insect pest damage. Further improvement work can be done on these identified varieties to improve their suitability to the savanna/forest transition agroecology of Osun State.

The contributions of Bowen University Teaching and Research Farm and Institute of Agriculture Research, Samaru are fully acknowledged.