The high generation of organic residues from the intensive farming of chickens has induced their use as fertilizer for forage crop production. This aimed to evaluate the effect of poultry litter application on agronomic traits and quality of silage of elephant grass. The experiment was conducted in the experimental field of Boa Vista Farm, in district of Cachoeira de Santa Cruz, Viçosa, State of Minas Gerais, in sandy argisol. The experimental period was from November 2014 to February 2015 and the treatments consisted of four levels of fermented poultry litter (0, 4, 8 and 12 ton.ha-1) with five repetitions. Evaluations consisted of measurements of plant height, stem diameter, number of plants.ha-1 and green mass yield. In relation to silage, measurements of gas losses, effluents and total losses were performed using the four treatments cited and four repetitions. There was a positive linear effect (P<0.01) of poultry litter level on plant height and a quadratic effect (P<0.01) of poultry litter level on the number of plants.ha-1, with maximum at 9.1 ton.ha-1 of poultry litter. There was no treatment effect (P>0.05) on the stem diameter, green mass yield and silage quality.

Elephant grass is widely used in Brazil for cattle production, especially dairy animals, because of its high potential for forage production. However, researches have many times revealed problems such as increase in production costs, mainly for nitrogen fertilizers and rangeland degradation (Olivo et al., 2014). On the other hand, Brazil as the second largest producer and first largest exporter of broiler meat in the world increased the generation of organic waste from the intensive farming of chickens, which requires proper environmental disposal, since the disposal at random in the environment causes risks of contamination (Tavares and Ribeiro, 2007; Costa et al., 2009).
Poultry litter has important concentrations of nitrogen, phosphorus, potassium, and micro minerals such as copper and zinc (Oviedo-Rondon, 2008; Lima et al., 2016). According to Costa et al. (2015), there is a necessity for studies on the use of poultry litter as organic fertilizer in the productivity of cultures. The use of organic fertilizer provides greater environmental sustainability, by preserving natural resources through nutrients recycling, avoiding water contamination and harnessing materials available on the agricultural property, in addition to the reduction of production costs (Ariati et al., 2017).
The benefit of the use of organic waste as fertilizers of forage plants occurs in productivity, directly, through the provision of nutrients readily available in the soil solution, or indirectly, through the modifications of the physical, chemical and biological properties of the soil (Zárate et al., 2010; Mangieri and Tavares Filho, 2015). Therefore, organic fertilizers improve root environment and stimulate the plant development (Kiehl, 1985; Menezes et al., 2004). Silage making is a strategy to store the excessive production of elephant grass in the rainy season for supplementation during the forage scarcity and weight losses in ruminant livestock at the dry season (Ajayi, 2011).
This strategy is especially important in the case of the small farmers with low producing dairy cows, predominant in the tropics (Olivo et al., 2014). However, elephant grass may have high values of moisture, which may affect the quality of the silage by undesirable fermentation (Brant et al., 2017), and indicates the necessity for evaluation of its silage quality.
This study aimed at evaluating the development of elephant grass in response to the application of increasing levels of poultry litter at planting, as well as the quality of the silage produced.

Location and period of the experiment
The experiment was conducted at the Boa Vista Farm belonging to the Federal University of Viçosa, located in the district of Cachoeira de Santa Cruz, municipality of Viçosa, State of Minas Gerais, between October 2014 and January 2015. The geographical coordinates of the experiment site are 20°45’ South latitude, 42°51’ West longitude and 703 m altitude.The climate of the region of Viçosa, according to the classification of Köppen (1948), is Cwa (mesothermal), subtropical, with mild and dry winter, and well-defined dry and rainy seasons.
The average annual temperature was 21°C, ranging from 31 to 12°C for the maximum and minimum temperature, respectively. The historical rainfall of the area is 1340 mm. However, in 2014 it was 782 mm, which represented 42% below the historical average of the region. Information on the climatic conditions during the experimental period was recorded at Main Climatological Station of Viçosa located at the Federal University of Viçosa, approximately 15 km from the experimental area.
Setup of the experiment
Prior to the experiment, Brachiaria decumbens and Brachiaria brizantha predominated in the area, which were used as reserve pasture for lactating cows. Thus, before planting elephant grass, soil samples were taken at random in several places of the experimental field, with the aid of a probe, at the 0 to 20 cm layer, to analyze the chemical and physical characteristics of the soil, according to the Commission on Soil Chemistry and Fertility (Comissão de Química e Fertilidade do Solo, 2004).
Soil tillage with plowing and harrowing was carried out in the dry season, in September 2014, so that all existing plants in the experimental area entered senescence. Plowing was done at approximately 0.3 m depth and harrowing was done to decompress the initial layer of the soil. In November 2014, the planting was done in rows, spaced 1 m between furrows and 30 cm deep.The experiment consisted of four treatments (0, 4, 8 and 12 ton.ha-1 of poultry litter) and five replications, totaling 20 experimental plots. Each experimental unit was five m long and 4 m wide, a total area of 20.0 m2, with four rows of plants, the working area was considered 5 m2, the two central rows, also discarding 50 cm at each end.
Soil and fertilizer characteristics
The soil of the experimental area is sandy argisol, suitable for crops with low fertility requirements (Table 1). The poultry litter used consisted of a flock of broiler chickens and coffee husks. This organic residue came from an industrial poultry farm located in the municipality of Coimbra, state of Minas Gerais, fermented for 60 days on a wet basis. Five poultry litter subsamples performed a single plot for laboratory analysis. The results of the analysis of the poultry litter used in this study are the following:
N (%) = 3.48; P (%) = 0.96; K (%) = 2.56; Ca (%) = 1.88; Mg (%) = 0.48; S (%) = 0.45; CO = 21.5; C/N = 6.18; pH (H20) = 7.2; DM (%) = 43.3.
The mineral analyses were determined in the acid extract (nitric acid with perchloric acid), dry matter at 65°C, and oven humidity at 75°C. The levels of poultry litter were determined based on quantities found in the literature (Farias et al., 1986; Arruda et al., 2014).

Agronomic evaluations
Growth parameters measurements occurred after 110 days of elephant grass planting in a central linear meter of the experimental plot. Among those, include the plant height from the ground level up to the ligule of the highest leaves, the stem diameter close to the ground surface by means of a caliper, the number of plants and weight in a linear meter in order to estimate the total number and yield per hectare. After weighting, the plants were chopped, sampled and frozen for feed analyses, following the methodologies of Detmann et al. (2012).
Elephant grass silage
Samples of elephant grass harvested at 110 days and chopped were stored in experimental bucket silos with a capacity of 3.8 L, equipped with caps coupled to Bunsen valves to allow the escape of gases from the fermentation. At the bottom of the silos, it was placed in 0.6 kg of dry sand, separated from the forage by a cotton cloth, to quantify the effluent produced.Elephant grass was compacted with a wooden stick. After compaction, the experimental silos were sealed with adhesive tape, weighed and stored. After 84 days of fermentation, they were again weighed to determine the losses by gases and open. After silage removal, the set (bucket, cap, sand, and cotton cloth) was weighed to quantify the effluent produced.
Silages at the top and bottom of the silos were discarded and the rest homogenized. Sub-samples of 500 g were collected for pre-drying in a forced air ventilation oven at 60°C for 72 h to obtain the dry matter content. These sub-samples were sent to the Plant Tissue Analysis Laboratory for analysis of the total N content (Tedesco et al., 1995), whose value was multiplied by the conversion factor 6.25 to estimate the crude protein content (Association of Official Analytical Chemists, 1995). The losses of gases and effluent were quantified by weight difference and expressed as percentage of the total ensiled material in natural matter.
Experimental design
The experimental design of the field experiment was in randomized blocks with four treatments (0, 4, 8 and 12 ton.ha-1 of poultry litter) and five replications. In the case of silages, the experimental design was completely randomized with four treatments (levels of poultry litter) and four replicates. The experimental data were tested by analysis of variance and regression at 5% of significance, using the Minitab program (Ryan and Joiner, 1994). 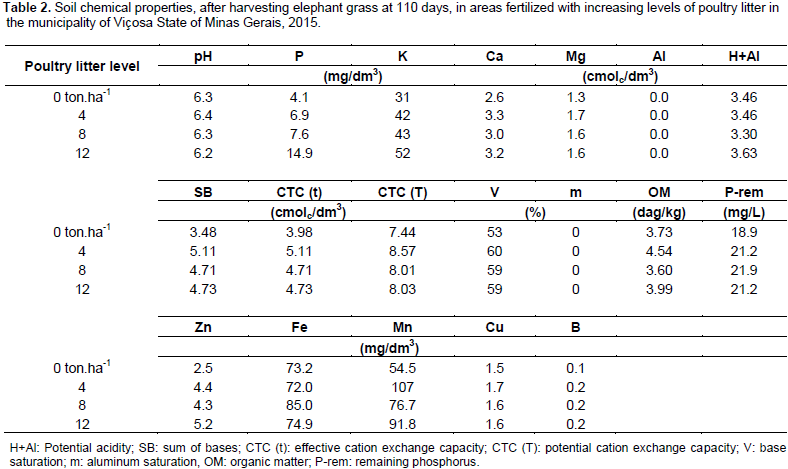 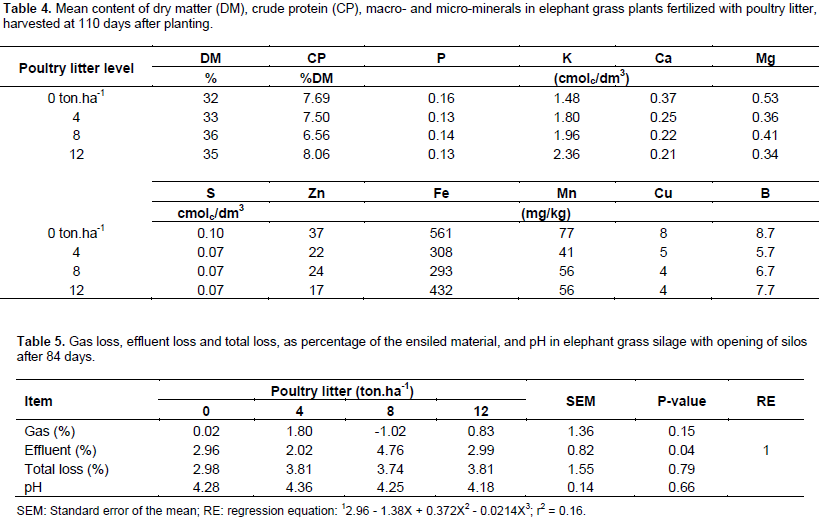 We thank CNPq, CAPES and FAPEMIG for the financial support of Paula Cristiane Trindade and Rogério de Paula Lana and by allowing the conduction and publication of this study.