Sorghum is an important crop in Ethiopia. However, its productivity is low owing to lack of farmer-preferred and stable improved varieties. To identify suitable cultivars, multi-environment evaluation of sorghum genotypes was carried out at four locations for two years. The result of AMMI ANOVA showed that genotype (G), environment (E) and genotype-environment interaction (G×E) significantly (P<0.01) affected sorghum grain yield. The G×E term was partitioned into two significant Interaction Principal Component Axes; where they captured 65.89% of the G×E variance. Genotypes G9, G10 and G12 are highly affected by environmental changes as they had higher G×E. Genotypes G1, G7, G2, G5, G11 and G8 had relatively low G×E, indicating lower influence of the environments on their performance. The GGE analysis showed that the first two PCAs explained 75.11% of the GGE variance. Genotypes G8 and G3 were the highest-yielding genotypes and significantly out yielded the checks. Genotypes G1, G12, G7 and G8 were stable genotypes. G8 was the most desirable genotype followed by G3, G7 and G6. G8 (PGRC/E#222878 × KAT-369-1) was officially released and given a local name called Raya. This white seeded variety is preferred by farmers for various food preparations (recipes), and it commands a premium price at the market. It can give high and stable yield in the unstable environmental conditions of Northeast Ethiopia. If used in its appropriate niche, the variety can contribute to the increase of sorghum productivity, and income of the cultivators.

Sorghum [Sorghum bicolor (L.) Moench] is one of the most important food and feed grain crops in the world; in 2018, about 59.3 million tons of sorghum was produced on 42.1 million ha of land globally. It is the second main crop in Africa with total production of 29.7 million tons on 29.7 million  ha  of land  (FAOSTAT, 2018). In Ethiopia, it ranks third in total production and area coverage preceded by maize and tef (Eragrostis tef [Zucc.] Trotter). In 2018/19 cropping season, sorghum was produced by 4739613 producers on 1829662.39 ha of land with production of about 5 million tons and average productivity of 2.736 t ha-1 (CSA, 2019). The crop has a multitude of uses where the grain is used for food and local beverages, and the stalk is used for feed, fire wood and construction of traditional houses. Moreover, the stalks are used to a lesser extent as a confection (Gebrekidan, 1973). The folklore, songs and some of the local names given to varieties show the importance of sorghum in Ethiopia (Kebede, 1991).

Much of the crop is produced in the semi-arid tropics where rainfall and temperature are variable, mainly on smallholdings (Bantilan et al., 2004). Moisture deficit is the major constraint for crop production in Northeastern Ethiopia. Sometimes the rainfall is erratic, unpredictable and insufficient. Consequently, in almost all areas of Northeast Ethiopia, crops including sorghum, are prone to periodic drought. In an area stretching from Chefa (10057’N/39047’E) to Kobo (1208’21’’N/39018’21’’E), about 30 landraces have been identified differing in utilization, maturity, height, resistance to biotic and abiotic stress and other agronomic characteristics (Tesfahun et al., 2007). Stemler et al. (1975) also stated that durra sorghums are most important in the Eastern and Northern mid-elevation highlands of Ethiopia.

Farmers used to grow highly productive, late maturing sorghum landraces which are planted from mid-April to early May. Currently, due to absence of rainfall in April or May, late maturing varieties are marginalized and farmers are forced to grow early maturing landrace and improved sorghum varieties. That made identification of early or medium maturing genotypes stable in multiple-environments indispensable.

Understanding of the causes of G×E helps to reduce the cost of extensive genotype evaluation by using representative testing sites. The presence of a large G×E may necessitate establishment of additional testing sites (Kang, 1996), which is not affordable in developing countries. To this effect, identifying sorghum varieties that are better in productivity and stability than the existing cultivars has been one of the main research thematic areas for this part of Ethiopia. Therefore, the objectives of the experiment were to identify better sorghum genotypes for low- and mid-altitude and deficit  moisture  stress  areas of Northeastern part of Ethiopia.

The experiment was carried out at four trial sites of Sirinka agricultural research center that represent sorghum production areas of Northeast Ethiopia. Sirinka, Kobo, Mersa and Chefa were used for testing the sorghum genotypes. The distance between Chefa and Kobo is about 250 km; Mersa and Sirinka lie in between 170 and 188 km away from Chefa, respectively. The descriptions of the locations are listed in Table 1.

Twelve sorghum genotypes were used in the study. Ten of the genotypes were test lines which attained homozygosity originally introduced to Ethiopia through Eastern African Regional Sorghum and Millets (EARSAM) network and were received from the national sorghum research program of Ethiopia, located at Melkassa. Two checks, standard (Yeju) and local (Jigurti), were used for comparison. The genotypes were tested in randomized complete block design (RCBD) with three replications. The materials were planted in 5 m × 3.75 m plot using 75 and 15 cm spacing between rows and plants, respectively in 2003 and 2004 cropping seasons. Fertilizer rates of 50 kg ha-1 urea and 100 kg ha-1 DAP were used. All the DAP and half of the urea were applied at planting, whereas the other half of the urea was applied at knee height stage after thinning and weeding. All other cultural practices like thinning and weeding were done uniformly as required.

The genotypes were evaluated for days to flowering and maturity, plant height, 1000-seed weight and grain yield. While collecting data for plant height, five plants were randomly picked from the central four rows and the means were used for analysis. The data were subjected to combined analysis of variance across location and over years (three-way ANOVA) initially to see the statistical difference of genotypes for the traits considered as per Cochran and Cox (1992):

Location-year combinations were used to represent environments for Additive Main-effect and Multiplicative Interaction (AMMI), and Genotype main effect and Genotype-Environment interaction (GGE) analyses. AMMI analysis was performed according to Zobel et al. (1988) and GGE analysis was computed as per Yan et al. (2000). Combined analysis across locations and over years, AMMI and GGE analyses were computed by GenStat (16th edn.) software.

Combined analysis of variance across locations and over years indicated statistically significant (P<0.01) difference among genotypes for all characters considered. Genotype × year interactions were significant only for days to flowering and days to maturity (Table 2). Genotype × location, and genotype × location × year interactions were significant for all the traits considered indicating differential responses of the genotypes across locations and seasons. In line with the present finding, a number of researchers observed significant (P<0.01) effects of G and G×L on grain yield (Human et al., 2011; Filho et al., 2014; Teodoro et al., 2016; Mare et al., 2017). 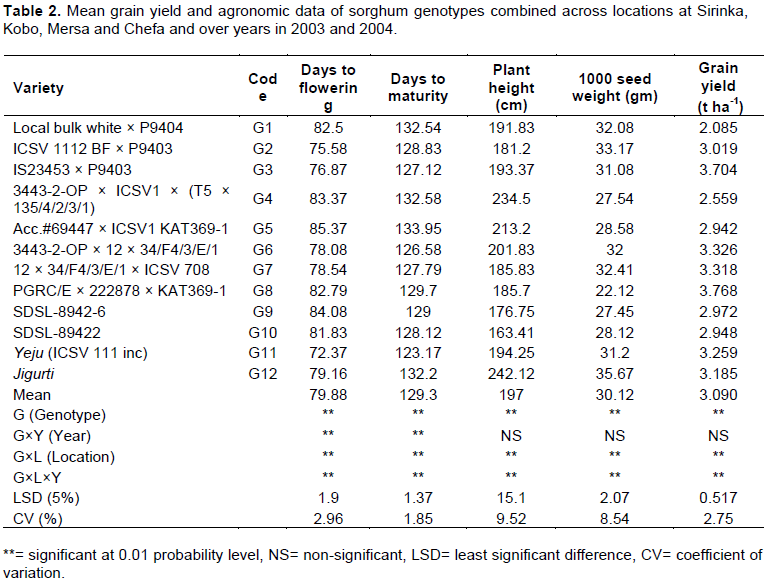 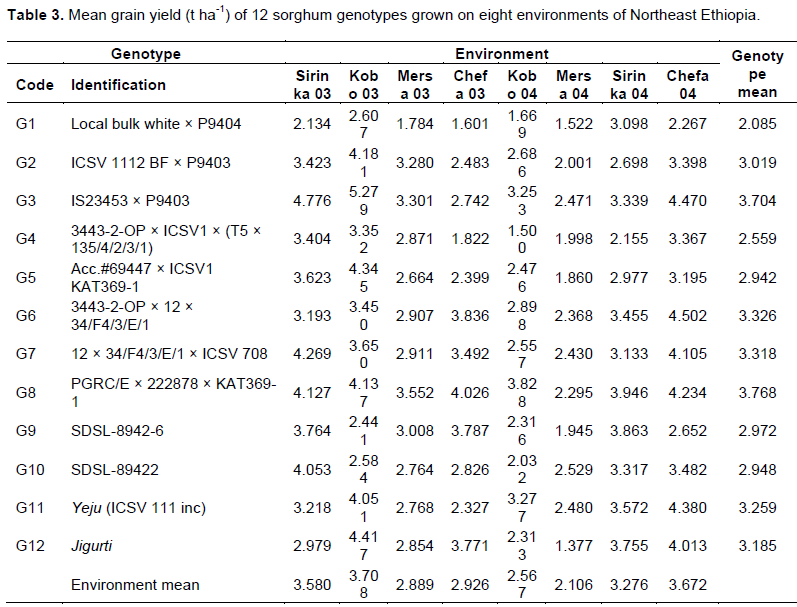 In the AMMI1 biplot (Figure 1), distances along the horizontal axis shows differences in grain yield (main effect); however, the vertical axis shows differences in interaction (G×E). Genotypes G8 and G3 were high performing whereas G1 was least performing genotypes in terms of grain yield. Genotypes G9 and G3 were highly affected by environmental changes (had high G×E) as a result they are not stable. Genotypes  G12,  G7,  G1  and G8 had minimum G×E and hence they are adapted to all the environments considered in the study; G1 had the lowest yield, though. Genotypes G5, G9 and G10 had almost similar main effects (grain yield) as they are arranged vertically, only differing in interaction effects (Figure 1). Likewise, environment Kobo03, Chfa04, Sirinka03 and Sirinka04 had above average yield while the rest had below average grain yield. Environments Kobo03 and Mersa04 were the highest and the lowest yielding environments, respectively. Environments Kobo03 and Chefa03 exerted higher G×E; Sirinka04 had medium; Mersa03 followed by Mersa04, Sirinka03, Kobo04 and Chefa04 exerted low G×E (Figure 1). The results are in agreement with the observations of Worede et al. (2020). 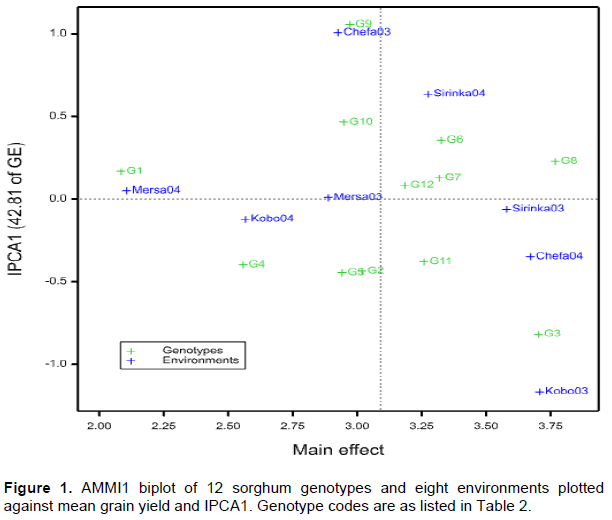 The lengths of the vectors from the origin indicates the magnitudes of the G×E imposed by the environments on the genotypes (Fan et al., 2001). Hence, environment Chefa03 and Kobo03 had higher G×E (long spoke) and hence they are highly discriminating environments. Environments  Sirinka03,  Sirinka04  and   Mersa04   had  medium G×E. Whereas Mersa03, Chefa04 and Kobo04 had minimum G×E as a result these environments are least discriminating. Similarly, Genotypes G9, G10 and G12 are highly affected by environmental changes as they had long spokes (G×E). Genotypes G1, G7, G2, G5, G11 and G8 had relatively low G×E indicating lower influence of the environments on their performance (Figure 2). The results were in harmony with the observations of Al-Naggar et al. (2018) and Worede et al. (2020).

GGE analysis showed that PCA1 and PCA2 explained 53.44% and 21.67% of the GGE variance, respectively (Figures 3 and 4). Figure 3 help visualize grain yield performance and stability of the genotypes. In such a figure, the average environment coordinate (AEC) passes through the biplot origin (Yan and Kang, 2003); its abscissa points towards higher grain yield, and its ordinate points to greater instability, in either direction (Yan and Tinker, 2006). Thus, G8 was the highest yielding genotype followed by G3 and G6, while G1 was the least. Lenghtes of the vectors from the AEC axis indicate   responsiveness    or    stability    of   genotypes. Genotypes with large vectors are highly responsive (less stable) and those with small vectors are stable (Yan and Tinker, 2006). Accordingly, Genotypes G1, G12, G7 and G8 were stable genotypes; whereas G9 and G3 were least stable (Figure 3). 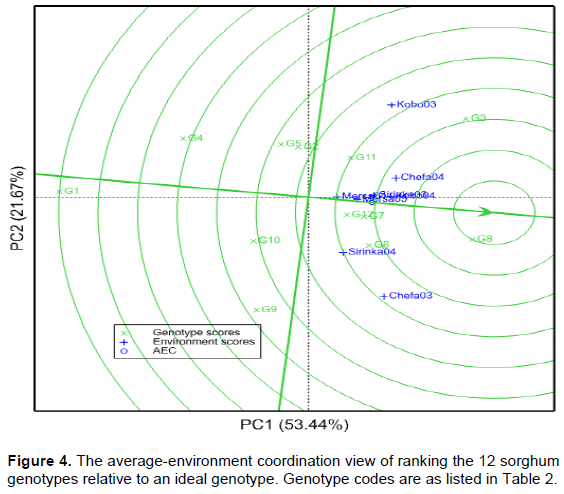 One of the important features of GGE biplot is the AEC view of ranking genotypes relative to an ideal genotype to identify desirable genotypes. Genotypes proximal to the arrow at the center of the concentric circles (ideal genotype) are assumed to be suitable (Yan and Tinker, 2006). Hence, G8 was the most desirable genotype followed by G3, G7 and G6. However, G1 is the least desirable followed by G4 (Figure 4). The result is in concurrence with that of Worede et al. (2020) and Assefa et al. (2020) who identified two desirable genotypes and a variety, respectively, using this methodology in Northeast Ethiopia. Moreover, a number of researchers identified high yielding and stable sorghum genotypes using a similar technique (Gasura et al., 2015; Mare et al., 2017; Al-Naggar et al., 2018).

During 2006 cropping season, genotypes IS234453 × P-9403 and PGRC/E#222878 × KAT-369-1, together with the checks, were sown on 10 m × 10 m plot both on-station and on-farm in all locations, and their performance was evaluated by farmers and the national variety release committee. In  2007,  PGRC/E#222878 × KAT-369-1 (G8) was officially released for Northeast Ethiopia and similar areas with altitude as high as 1850 m.a.s.l. for the reason that G8 was better in yield stability; otherwise, there was no significant yield difference between the two candidates. The released variety is given a local name called Raya. Raya (PGRC/E#222878 × KAT-369-1) matures later than the standard check Yeju (ICSV 111 inc) but earlier than the local check (Jigurti). It has short stalk as compared to Jigurti but taller than Yeju. The variety is white seeded, and that made it preferred by farmers and consumers for various food preparations; it also commands a premium price at the market. If used with the optimum management practices, the variety can contribute to the increase of sorghum productivity in the area.

IS234453 × P-9403 (G3) is a progeny of one of the Striga resistant varieties (P-9403; Abshir) released in the same area. Evaluation of G3 for Striga resistance could be an area of future research. The genotype G3 is also tall and relatively bold seeded as compared to G8 and can be utilized in future sorghum improvement programs as a possible parent for crossing.

The authors appreciate the financial support given by Amhara Regional Agricultural Research Institute (ARARI). The help of Tsegaye Gebremariam and Mulugeta Mamo is highly appreciated.