The diversity of plant species included in the Fabaceae family are important as timber resources, coal production and human and  animal  feed;  besides  that  species  like Prosopis juliflora (Sw.) DC. 1825, with drought resistance, prevents soil erosion (Aguado and Suarez, 2006).

In countries such as the United States of North America, native legumes are a desirable component as plant cover, although seed predation by insects can substantially reduce the cultivation of these species (Boe and Johnson, 2017). Of little known biology, the insects known as brúquidos, weevils or seed beetles (Coleoptera: Bruchidae) represent one of the main regulatory factors of the fabaceae populations (Yus-Ramos et al., 2008). These insects feed mainly on seeds (Johnson, 1989; Luna-Cozar et al., 2002; Romero and Johnson, 2004), where they pass their pupa state; and once they emerge as adults, oviposit various plant seeds belonging to 33 botanical families, with preference over Fabaceae and Convolvulaceae (Luna-Cozar et al., 2002). Oviposition occurs in the remaining pods of the previous season, which have not fallen. This results in high levels of brúquidos during the following season (Saiz, 1993). These insects, considered as important pests in beans under field and storage conditions (Aebi et al., 2008), are distributed in most continents, for which case, most species are found in tropical regions of Asia, Africa, Central and South America (Ramírez et al., 2013). At present, there are about 1,700 species of turquids reported. They are distributed in 66 genera, of which, of the 20 genera and 324 species present in Mexico, 90 species correspond to the state of Sinaloa (Lugo-García et al., 2015). Due to their sperm eating habits (Romero, 2002), these insects play an important role in the population regulation of wild plants, with damage to seeds that range between 50 and 100% (Romero and Johnson, 2000). In the particular case of beans, estimated damages have been attributed to 35% in Mexico and Central America, 13% in Brazil and 7.4% in Colombia (Van Schoonhoven and Cardona, 1986). The biological control of pests is related to the use of natural enemies, parasitoids and predators to combat pest insects, which, although not as effective and spectacular as chemical control, is very effective when used opportunely (Gómez and Vargas, 2014), with parasitoids and predators determining the regulation of their host populations in natural ecosystems (Hastings and Godfray, 1999). In the last decade, several successful biological control programs based on parasitoids on noctuid larvae, diamond back palomilla, among others (Godfray, 1994) have been documented. Although this information is relevant, this group of hymenoptera, as well as their biological and economic importance, has been little studied in Northern Sinaloa, with little information on the diversity of families in natural and agricultural ecosystems. Therefore, the objective is to identify the parasitic Hymenoptera species associated with  the  diversity  of  Bruchidae  over  fabaceae  in   four municipalities in Northern Sinaloa, Mexico. 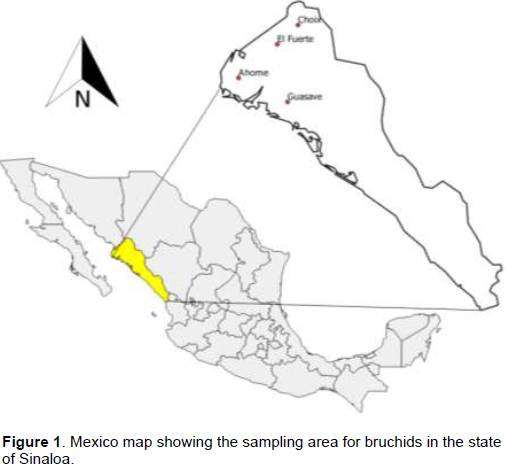 In order to obtain bruquids associated with Fabaceae, in accordance with the phenological stage of fruiting of the diversity of plant species, nuts (pods) from the diversity of established plant species were collected during the months of February to December 2017 in the four municipalities. The fruits were deposited in Kraft paper bags model S-13236, individually labeled with data such as location, date, species of fabaceous, etc. The collected material was transferred and conserved in the laboratory of the Entomological Collection of the Valle del Fuerte, of the Autonomous University of Sinaloa (CEVF-UAS). Here after the seeds were separated and deposited in plastic containers of 16.5 × 13 cm, covered with thin tulle cloth to allow air circulation and to prevent the escape of insects, maintained at temperatures of 23°C were checked every third day until adult emergencies were obtained. They were deposited in plastic bottles of 200 ml with 70% ethanol. For the morphological identification of the insects, the genitalia of the males were extracted, which were processed according to what was considered by authors such as Kingsolver (1970) and Kingsolver and Whitehead (1974). Also, the interpretation of genital structures was based on the nomenclature proposed by Romero and Johnson (1999). The material studied was deposited in the CEVF-UAS facilities.

To identify the emerging parasitoids, they were separated and placed in 5 ml polypropylene tubes with 70% ethanol; they were dehydrated with ethanol at different doses of purity (80, 90 and 100%, respectively) for a period 30 min. A subsequent treatment with amyl acetate was carried out to clean and accommodate its wings, antennae and legs for assembly. When the insects were quantified, representative samples of similar morphological characteristics were mounted on entomological pins and were morphologically identified with the help of a stereoscopic microscope, using identification keys of various authors, with corroboration of some species by specialists.

In relation to the emergencies of parasitoids from the brúquidos present in the seeds collected in each of the municipalities (Table 2), the dominance in municipalities regarding the number of specimens corresponded to Ahome,   El  Fuerte,  Guasave  and  Choix,   with   36.94, 27.16, 20.19 and 15.71%, respectively. In turn, the highest amount of parasitoids obtained on a monthly level corresponded to the period from May to November, with 4,182 emergencies, equivalent to 87.58% of the population. All parasitic hymenoptera specimens were grouped into two superfamilies: 1. Ichnemunoidea, represented by the Braconidae family (692 specimens: 14.49%) and 2. Chalcidoidea, for the families Eulophidae, Pteromalidae, Eurytomidae, Bethylidae, Eupelmidae and Trichogrammatidae, with 3,159, 443, 304, 134, 40 and 3 emergencies, corresponding to 66.16, 9.27, 6.37, 2.81, 0.84 and 0.06%, respectively (Figure 2). 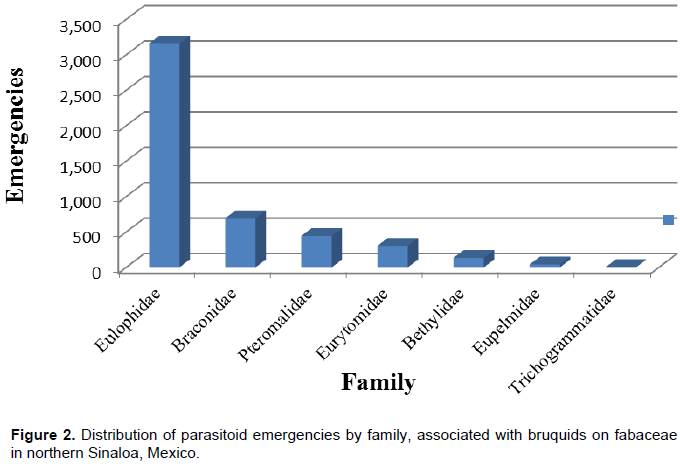 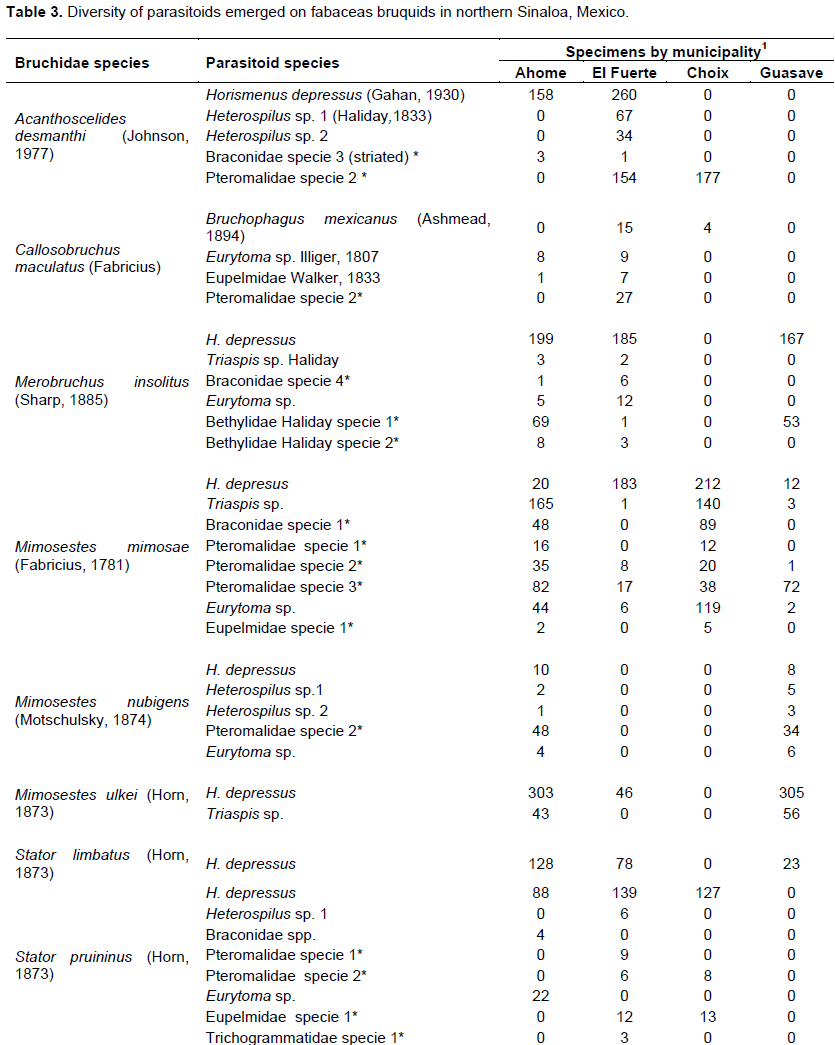 Boe and Johnson (2017) reported the presence Acanthoscelides fraterculus and Bruchophagus mexicanus living together in mature pods of Astralagus plattensis in northwestern Dakota, USA, with destruction of 44% of the seeds obtained in a sample of 10 pods, by these insects. Aebi et al. (2008) point to weevils of the genus Zabrotes as responsible for large economic losses on beans in the field and storage in Mexico and Central America.

Noyes (2013) indicates the presence of 62 Horismenus species parasitizing larvae belonging to the orders Lepidoptera,  Coleoptera  and  Hymenoptera,  considered primary and secondary hosts. They are distributed in 14 countries of the neotropical region over 10 angiosperm families. Hansson et al. (2004) identified 131 specimens of four Horismenus species: H. butcheri Hansson Aebi & Benrey, H. depressus Gahan, H. missouriensis (Ashmead) and H. productus, attacking the bruquids Acanthoscelides obtectus and A. obvelatus Bridwell associated with Phaseolus coccineus subsp. coccineus and P. vulgaris var. mexicanus Delgado. Likewise, these authors indicate an emergency of 59.1% of parasitoids (Horismenus spp.) from P. coccineus seeds infested with Acanthoscelides sp. and Zabrotes sp. This situation is similar to that obtained in this study, with 57.97% of H. depressus emergencies on the A. desmanthi and Z. subfaciatus in Ahome, El Fuerte and Choix.

In this study, there was a low level of parasitism by braconids on A. desmanthi and C. maculatus (Ahome and El Fuerte); it was significant on M. mimosae (Ahome and Choix) and low on S. pruininus (Ahome). In this regard, Campan et al. (2005) studied the influence of three populations of the braconid Stenocorse bruchivora (Crawford) on Z. subfasciatus in wild and cultivated seeds of P. vulgaris of the states of Puebla, Estado de Mexico and Morelos. They did not find any differences between populations and there was a greater parasitism (60%) in wild seeds than in the cultivated ones. This is attributed to both the quality of the host plant as the genetic variation between populations is the crucial factor that determines the nature and evolution of the interaction between parasitoids and their prey.

In Burkina Faso (USA), Sanon et al. (1998) recorded efficient control of C. maculatus, responsible for large losses in V. unguiculata, through flood releases of Dinarmus basalis (Pteromalidae). This is similar to what happened to species of this family in this study, by virtue of having obtained a 100% parasitism on the bruquid in the municipality of El Fuerte, as well as 97.79% parasitism on A. desmanthi in Choix; in Ahome and Guasave it registered 73.84 and 62.96% parasitism on M. nubigens.

Although in the study the presence of parasitoids belonging to Eupelmidae was only 40 specimens associated with the species of A. desmanthi, M. mimosae and S. pruininus, in the particular case of species of the genus Eupelmus in the Palearctic region, Noyes (2013) points to the orders Coleoptera, Diptera, Hemiptera, Hymenoptera Lepidoptera and Orthoptera. Brúquidos on which they develop like primary or secondary ectoparasitoides of larvae or pupae inside protect habitats like buds, seeds, fruits or gills (Gibson, 1995).

The highest total parasitism percentage was presented by the municipality of Ahome (40.14%), followed by Choix (23.46%), El Fuerte (14.27%) and Guasave (12.86%). The high percentage of parasitism in the first three municipalities may have been due to its great richness in Fabaceae species. This is  in  line  with  Molina-Ochoa  et al. (2004), who argue that the distribution and rates of natural parasitism may be related to the diversity of habitats with the proximity of forests. It is similar to that obtained in Guasave, by virtue of the fact that the sampled Fabaceae are located on the banks of agricultural plots. This could cause the parasitoid population to decrease due to the application of insecticides in agricultural crops. This also agrees with Hajek (2004), considering that insecticides significantly reduce the populations of existing natural enemies in crops.

The authors appreciate Dr. Beatriz Rodríguez Vélez, of the National Center for Biological Control Reference (CNRCB), under the National Service of Agrifood Health, Quality and Safety (SENASICA), for her contribution in the identification of some species of parasitoids.