Adjustments for axial and sieves systems of coffee harvesters

The mechanical harvesting of coffee is a recurrent practice which increases every year, in the Cerrado of Minas Gerais and in Brazil, in general (Ortega and Jesus, 2011). The harvest of the fruits of the coffee tree is based on six operations: harrowing, threshing, sweeping, reap, sieving and transport. The harvesters’ adjustments to remove the highest number of fruits are usually performed by attempts, varying the vibration from 650 to 950 cycles min-1 (Silva et al., 2008).

For the coffee-threshing stage, there are several studies (Giraldo et al., 2017; Junior et al., 2016; Santinato et al., 2016; Silva et al., 2010, 2015; Villibor et al., 2016) which show results of the selective harvesting, better adjustments,  quality   of   the   operation,   among   other researches. However, there is just few researches for the reap stage operation, and there are no approaches in literature regarding adjustments, effects and losses, among others. The importance of studying this operation is due to the mechanized harvesting of the coffee hardly having crop efficiency close to 100%, since normally 10 to 20% of the coffee of the plant falls during the mechanized harvesting operation. This amount is currently acceptable due to the system of the present harvesters (Matiello et al., 2010).

According to Santinato et al. (2015a), the losses are concentrated in the harvesting system of the harvester, which is the main failure. This is because the collectors open and close slightly as the harvester moves, allowing the fruit to fall in the spaces left. In this way it is assumed that coffee will always be dropped after the plant harvesting operation.

In addition, there is also the natural detachment of the fruits, which only adds up and increases the amount of coffee fallen under the canopy of the coffee tree. Sun exposure is an important factor that influences the natural fall of the fruit. The fruits present in the upper third of the plant ripen faster than the fruits of the middle and lower thirds, falling on the soil with higher intensity (Santinato et al., 2014; Silva et al., 2010).

This coffee, however, is not considered lost, since the producer can and should collect it. It is important to emphasize that coffee that falls on the soil can undergo conditions that deteriorate it, affecting the sensorial form of the product, as well as the value paid for it (Batista and Chalfoun, 2006; Oliveira et al., 2007).

The mechanized reap of the sweeping coffee is composed of two operations, the first consisting of a blower/harrow, responsible for blowing all material to the center of the street, and the second is the reap as the harvester passes, collects and separates the coffee from impurities inside the machine (Matiello et al., 2010).

The mechanized harvesting operation is complex, as reap and separation efficiency is influenced by factors such as soil texture and material plant present on the soil (branches, stumps and leaves). In sandy soils, there is a facility for collecting fruits that have fallen from the plants; in clay soils, due to the higher water content, it is difficult to collect the material present on the soil. Therefore, the operational speed and rotation of the power take-off adopted in the operation influence reap and cleaning efficiency directly.

Due to the few studies on the reap operation, it is important to understand the regulation that is closest to the ideal that aims at higher product quality with minimum loss. As a result, the aim of this study was to define the best  adjustments  for  axial  and  sieves   system   coffee harvesters.

The experiment was carried out at Fazenda Paraíso 1, located in the city of Carmo do Paranaíba, MG, Brazil, at the geodesic coordinate 19°01'09 '' South latitude and 46°14'22 '' West longitude, with average altitude of 1000 m and average slope of 8%.

The variety used was the 15-year-old Catuaí Vermelho IAC 144 cultivar with a four meters space between rows and 0.5 m between plants, totaling 5000 plants ha-1. The coffee was lined in the center of the streets along with impurities such as soil, stone, and branches among others.

Mechanical harvesting of fallen coffee was carried out by axial system (Miac Master Café 2) and sieves  system's (Mogiana Spirlandelli 25A) harvester, the most used harvesters for coffee, both powered by a New Holland TT3880F 4 x 2 TDA coffee tractor with 55.0 kW (75 hp) in the engine. The operation was performed with the economic power take-off activated and rotations that varied according to the treatments studied.

The characteristics of the machines are shown in Table 1, describing their functions and specificities, demonstrating that the cleaning system is specific to each brand and model.

Initially, the amount of the initial material was evaluated. For that, all materials present on the soil was collected and the coffee separated using a sieve and manual selection. Subsequently, the coffee was measured in a graduated container. Samples of this variable were collected only for characterization of the area.

The harvester was operated and the residual material was collected after its operation. From this material, only the coffee was separated by using sieve and manual selection, which was subsequently weighed and the volume measured, thus becoming the remaining coffee.

The amount of initial coffee was subtracted by the remaining coffee to obtain the amount of coffee collected. The reap efficiency (%) was obtained by means of the Equation 1 (Tavares et al., 2015).

Inside each harvester, a sample of the material was collected directly from the machine storage after each treatment. The sample was manually separated into coffee and other impurities. After being separated, the samples were weighed and the values transformed into percent, obtaining the purity and impurity of the sample, respectively, as the percentage of purity of the cleaning efficiency of the harvester.

In possession of the data, the analysis of variation was done and, when appropriate, the Tukey and regression test was applied on each factor at the significance level of 5%.

The average volume of the initial coffee (fallen coffee) was on average 360 kg ha-1 (6 sc ha-1) in the studied area. For the variable reap efficiency, there was interaction between the speed and rotation factors, for both the axial and sieves system harvesters (Table 2), with this variable unfolding as follows.

The 500 and 1100 m h-1 ground speeds presented lower reap efficiencies in the rotation speeds of 1400 rpm compared to the larger rotations, a result which was already expected, since it presents the lowest GS and RS ratio for the axial system harvester, obtaining between 35 and 47% of reap efficiency compared to the others, which varied between 84 and 94% for the other regulation combinations (Table 3). This fact is similar to the results found by Tavares et al. (2015), where the increase in RPM influenced the reap efficiency.

At the highest speed (1500 m h-1), it was not possible to harvest coffee mechanically at 1400 and 1600 rpm. There was a jam in the machine that in just a few meters stopped working. This fact also occurred in an experiment by Santinato et al. (2015b) that did not obtain an answer from the axial system and sieves system harvesters working at 2200 m h-1.

However, for the sieves system harvester, it was observed that the worst reap efficiency (44%) was in the 2000 rpm rotation at the highest speed (1500 m h-1). For all other speed combinations and rotation, the reap efficiency was considered good, varying between 80 and 90% (Table 4).

The increase in speed does not change the reap efficiency for all rotations, except for the lowest rotation of 1400 rpm, which presented a linear equation (y = 0.019 + 25). However, this rotation presents the worst values of reap efficiency compared to the larger rotations for the axial system harvester (Figure 1a). 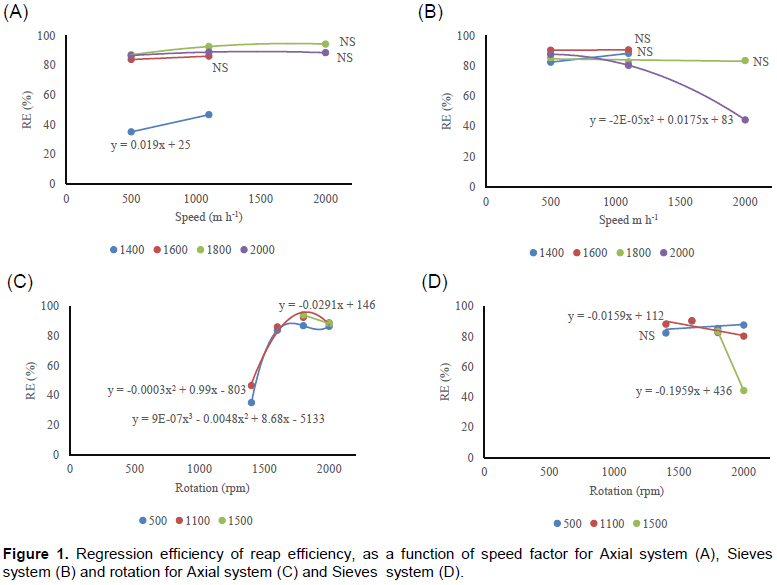 Likewise, we can observe the regressions for the sieves system harvester (Figure 1b), which showed there were no increments of reap efficiency when the speed was increased, except for the rotation of 2000 rpm, where there was a considerable decrease in the highest speed.

For the cleaning efficiency variable, there was interaction between the speed factors and the rotation, both for the axial system and sieves system harvesters (Table 5), with this variable being shown as follows.

Minor speeds (500 and 1100 m h-1) in rotations starting from 1800 to 2000 rpm perform better cleaning efficiency, from 86 to 99%, which are considerably better than 1400 and 1600 rpm, which achieved efficiency of only 29 and 61%, respectively, for the axial system harvester (Table 6). However, it is important to note that the intermediate speed (1100 m h-1) at 2000 rpm also showed good cleaning efficiency (91%), which is considered an interesting regulation, since it allows more than twice the speed  of  displacement,  allowing  better  field   operation efficiency without impairing product quality.

For the Mogiana collector, lower values are observed in the harvesting efficiency compared to the Miac harvester. First, the velocity factor within the rotations was observed to be at a lower speed (500 m h-1), the rotations of 1400 and 2000 rpm were better not differing from 1600 rpm, and the rotation of 1800 was lower (Table 7).

For the sieves system harvester, lower values are observed in the harvesting efficiency compared to the axial system harvester. When analyzing the velocity factor within the rotations, it was observed that at a lower speed (500 m h-1) the rotations of 1400 and 2000 rpm were better, not differing from 1600 rpm, and the rotation of 1800 was lower.

Therefore, the sieves system harvester does not show an ideal adjustment. There is no linear or quadratic curve that allows inferring the point of maximum cleaning efficiency. The values do not find an increasing trend, aside from being very low values, providing a coffee of lower quality. This is confirmed by regression graphs, where the axial system harvester (Figure 2A and 2C) presented decreasing equations with increasing speed or decreasing rotation, but for the regressions of the sieves system harvester (Figures 2B and 2D) the relationship between the curves for both the speed and the rotation factor is not observed.

The facts verified in this experiment make the necessity of this type of study for each type of harvester evident, since they have different systems. For the grain reap system, the axial system harvester has a 20-to-lifter roller system.  For  the  sieves  system   machine,   the  system captures the coffee with the aid of sweeping blades. The cleaning system, the main differential between the collectors, consists of the presence of a turbine that performs the suction of plant material in the axial system machine, in comparison to the sieves system that presents a sieving system. Both present a shaking of sieves system.

In general, it is possible to operate the axial system harvester at a speed of 500 m h-1 regulated with 1800 to 2000 rpm or speed of 1100 m h-1 set at 2000 rpm, obtaining a good reap and cleaning efficiency. The higher speed offers twice the field efficiency, so it is the main recommendation. For sieves system's harvester, the speed of 1100 m h-1 and rotation from 1400 to 1800 rpm is recommended, since it offers higher operating efficiency without compromising the cleaning.