The purpose of the work is to analyze the trends in the development of the oil-and-fat subcomplex as one of the most important components of the agribusiness of the Russian Federation, and state policy in the strategic planning in this sphere. The materials of the United States Department of Agriculture, the State Statistics Service and the Ministry of Agriculture of the Russian Federation served as the information basis for the research. The legislative and regulatory acts of the Russian Federation were used for the analysis of the state policy in the field of strategic planning in the agribusiness. Results of the research showed that the development of the oil-and-fat subcomplex is hampered by a large number of problems, one of which is the absence of the development target program-strategy. The most optimal of the possible options for the development strategy is the formation of a cluster that will allow optimizing the work of all its participants, involved in various spheres of the agribusiness, logistic infrastructure, public authorities, scientific and personnel support, as well as contributes to solving the identified problems. In the study, within the framework of the analysis of the internal and external environment of the oil-and-fat subcomplex, the problems that hamper its development are considered. The advisability of developing a state program for creating a cluster has been revealed and directions for implementing state support for solving technical and technological as well as social and economic problems have been determined.

The oil-and-fat subcomplex in its present state is a complex multifunctional system that involves a large number of elements, including various markets of the oil primary products-sunflower seed oil, soybean, rape, cotton, palm seeds, etc. The oil-yielding crops are widely used for food production, serve as raw material in the production of industrial products in such sectors as leather, textile, paint-and-varnish, medical, etc., and in addition to that, the by-products of the oil primary products processing are used in the production of mixed fodder for livestock (Tiwari, 2017; Ramos et al., 2017).
To fully and sustainably meet the needs of the population of individual countries and regions in the products of the oil-and-fat subcomplex, it is necessary to create for producers, processors and consumers the proper conditions that ensure the production of high-quality products in volumes and in range corresponding to the demand and consumption norms. As the experience of developed countries shows, the solution of these tasks is impossible without the use of strategic planning mechanisms that allow increasing the efficiency of managing elements of the agribusiness. In the conditions of rapidly changing market requirements and growing competition, the main success factor is the ability at the state level to put into practice long-term planning and forecasting, as well as system monitoring and control over the implementation of the strategy in order to identify possible deviations from the adopted line in a timely manner and to correct them (Avadi et al., 2018; Calabro and Vieri, 2015).
The purpose of this study is to analyze current trends in the development of the oil-and-fat subcomplex as one of the most important components of the agribusiness of the Russian Federation, as well as the state policy in the strategic planning in this sphere.
To achieve this goal, the following tasks were set:
(i) To analyze the structure and volumes of production of the main types of oil-yielding crops in the world and in the Russian Federation;
(ii) To identify the main trends and problems for the development of the regional oil-and-fat subcomplex of the Russian Federation;
(iii) To analyze the main documents regulating strategic management in the agribusiness, using the example of the Amur Region as the leading region for soybean production in the Russian Federation.

The materials presented in this paper are the result of the research conducted on the basis of the All-Russian Scientific Research Institute of Soybean (Russian Federation). As an initial study, a theoretical analysis of the existing methodological approaches to strategic planning in the economic scientific literature (Abigor et al., 2003; Ah Chee et al., 2011; Kozenko et al., 2016; Manzhosova et al., 2017; Wegren et al., 2015) was carried out. The analytical review made it possible to get an overview of the development of strategic planning in the Russian Federation and foreign countries, to clarify the research issues and to identify key sources of obtaining the information for further work.
Further, an analysis of the structure and volumes of production of the main types of oil-yielding crops in the world and in the Russian Federation was conducted. The analysis was based on the data from the United States Department of Agriculture for the period from 2013 to 2017. As a result of economic and statistical processing of the selected data, the main trends and problems in the development of the regional oil-and-fat subcomplex of the Russian Federation were revealed. In addition to the data of the bodies of the international and internal state statistics of the Russian Federation, we considered the official documents regulating strategic management in the agribusiness, using the example of the Amur Region as the leading region for soybean production in the Russian Federation.
Then, based on the existing experience of strategic planning in the agribusiness studied at the first stage of the research, the optimal variant of the development strategy for regional agro-industrial subcomplexes was chosen and the directions for implementing state support for solving technical and technological as well as social and economic problems were determined.

In the last 5 years, the volume of world production of the most important oil-yielding crops has a stable tendency to growth (Cattelan and Dall'Agnol, 2018; Kuzmenko et al., 2016; Li et al., 2017). At present, soybean occupies a dominant position in the structure of gross yields of agricultural plants of the oilseed group. In 2017, a the share of soybean accounted foramounted to 60% of the world production (Table 1). The rape and sunflower (12,.6 and 7,.9%, respectively) are take in the second and third place positions (USDA Foreign Agricultural Service, 2018).

In the period from 2013 to 2017, the production of soya beans demonstrated the highest growth rates, 122.7%; except for cotton, the rest of the crops also showed positive dynamics. The growing interest in soybeans in the world and, as a result, an increase in production volumes, is caused by a wide range of its application. It is associated with  a  combination  of  high  protein  content, close in quality to the animal protein, and oil, that is rare for plants. At present, soybean is an indispensable component in fodder production, primary products for the food and chemical industries and for the production of building materials, and in recent years also for biofuel.
According to the Food and Agricultural Organization (FAO) estimates, the Russian Federation took the 8th position in the oil crop production in 2017; and its share in the worldwide production was 2.6% (USDA Foreign Agricultural Service, 2018). The situation is largely determined by the production of sunflower seeds, which is the main oil-yielding crop, cultivated in Russia, and according to the level of which the country takes the second position in the world after Ukraine (Table 2). In 2017, the share of sunflower was 61% in the structure of gross yield of the oil-yielding crops. The soybean takes the second position, both in the structure of sown areas and in gross output (Figure 1). 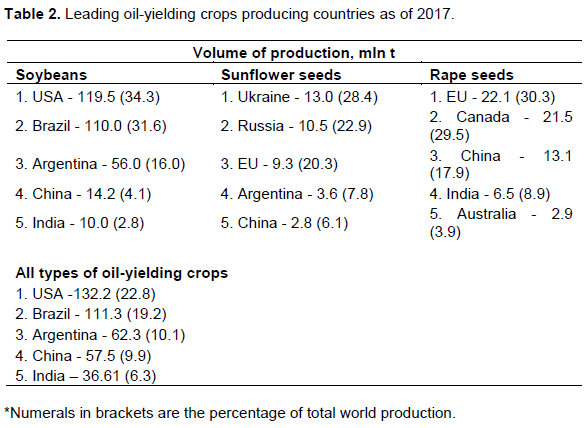 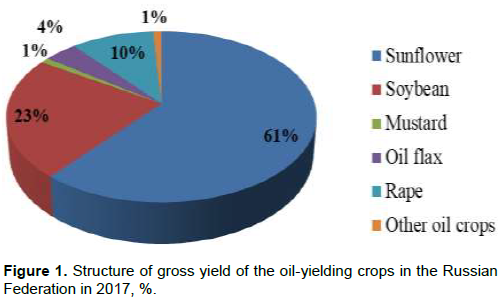 Historically, the main production of soybean in Russia is concentrated in the Far East. This is due to the proximity to the genetic center of the crop origin and the centuries-old traditions of cultivation (Krivoshlykov et al., 2016). The All-Russian leader in soybean production is the Amur Region. In 2017, a record harvest of soybean was collected in the region. It amounted to 1366.8 thousand tonnes (35.6% in the total amount of yields) (Fedstat.ru). For the year, soybean production increased by 40% or by 389.6 thousand tonnes (Table 4).

Over the past decades, soybean production remains the main direction of agriculture in the Amur Region, the efficiency of which affects the financial and economic situation of the agribusiness of the region. Since only soybean, determining the direction for development of all the spheres of the agribusiness of the region as a whole, is grown from all the crops of the oil-and-fat subcomplex in the Amur Region; in this case, we consider it expedient to use the wording "soy subcomplex" instead of "oil-and-fat subcomplex". The system-forming role of the soy subcomplex for the Amur Region requires the most responsible approach to the elaboration of its development strategy, based on a deep analysis of the situation and  the  identification  of  existing  development trends, barriers and potential opportunities in the conditions of challenges and threats to the external environment.
Trends in the development of the soy subcomplex of the Amur Region
Agriculture in the Amur Region is developing quite dynamically. In 2017, the volume of produced agricultural products amounted to 62225.2 million rubles, 77% of which accounts for the products of plant growing (Table 5). The leading position of the plant-growing sub-sector in the agribusiness of the Amur Region is determined by the production of soybean, as the main crop of the region. So, in 2017, the share of this crop amounted to more than 50% of the value of all the products of the plant-grown and more than 40% of the total agricultural production (Operational Data of the Ministry of Agriculture 2013-2017). According to the estimates of the authors, in 2017, soybeans were produced for a total amount of over 26 billion rubles.

Over the past 5 years, the size of sown areas under soybean in the Amur Region has grown by more than 40%, from 649.7 thousand hectares in 2013 to 964.7 thousand hectares in 2017 (Operational Data of the Ministry of Agriculture, 2013-2017). The growth of sown areas under soybean in the region is not only caused by plowing of fallow land, but also by the reduction in cultivation of other crops that entails a disorder of crop rotations that leads to an increase in weed infestation of crops, diseases damage of soybean, and, as a result, there is a reduction in the crop yield and profitability of its production (Figure 2) (Sinegovskiy, 2015). 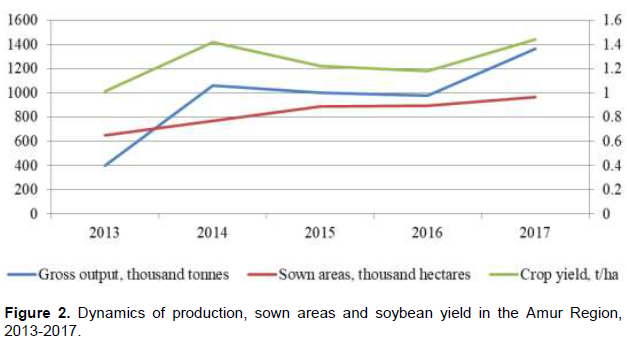 Export is one of the main directions of soybean realization in the Amur Region. China is the largest consumer of the Amur soybean. From 2013 to 2017, the export of the Amur soybean grew 6.7 times in physical terms and 9.2 times in value terms (Table 6) (Customs Statistics of Foreign Trade). The share of soybean in the total volume of exports from the Amur Region has also increased, and if in 2013-2014 it did not exceed 5%, then in 2017 it amounted to 24.8%.

The creation of soy cluster in the region will allow optimizing the work of all its participants involved in various spheres of the agribusiness, logistic infrastructure, public authorities, and scientific and personnel support that will enable achieving the following results:
(1) To increase the efficiency and competitiveness of agricultural enterprises producing soybean.
(2) To increase the soybean production and to expand the number  of  directions  for  its  processing  due  to  the scientifically grounded approach (since the cluster provides the grounds for direct interaction between production and science).
(3) To provide the subsector of livestock farming with fodder base, and to provide the population with soybean processing products, which in conditions of low self-sufficiency with meat products, will allow satisfying the need for protein.
(4) To raise the incomes and living standards of the agricultural population.
The success of the strategy for the development of the soy subcomplex depends to a large extent on the financial and organizational support of the Ministry of Agriculture, the Ministry of Economic Development and other departments of the Amur Region in increasing investment and financial transfers to the agricultural sector, solving problems of rural population employment, improving the level and quality of life. The government of the region should form a unified strategy for cluster development of the soy subcomplex of the Amur Region, define a list of targets, and carry out annual monitoring of their achievements with adjustment of the developed measures in order to achieve the intended purposes.