The use of irrigation water containing cyanobacterial toxins can cause significant impacts in agricultural and consequently environmental health. The purpose of this study is to evaluate the effects of cyanotoxins (microcystin-LR and saxitoxin) on germination, growth and micronuclei formation in lettuce (Lettuce sativa) and coriander (Coriandrum sativum). Seeds of lettuce and coriander were exposed during 7-9 days to environmentally relevant concentrations of microcystin-LR (MC-LR1= 0.4 µg/L; MC-LR2= 1.0 µg/L; MC-LR3= 5.0 µg/L) and saxitoxin (SX1= 0.02 µg/L; SX2= 0.1 µg/L; SX3= 0.4 µg/L). In germination test, differential responses were observed being lettuce the most affected in the presence of saxitoxin, and coriander to microcystin-LR treatments. Cyanotoxins inhibit seedlings development to both plants species and promote formation of micronuclei in root cells. Cyanotoxins inhibit seed germination, growth and cause DNA damages, but the intensity depends on both the nature of the toxin and plant species.

The occurrence of cyanobacterial blooms has increased significantly in many regions of the world in the last century due to water eutrophication. These blooms are hazardous to humans, animals, and plants due to the production of cyanotoxins (Christensen and Khan, 2020). These toxins are secondary metabolites produced by cyanobacteria that trigger harmful effects on cells, tissues or organisms (Carmichael, 1992). Cyanotoxins are released into the water, only during cell senescence or cell death, or cell through water treatment processes such as algaecide application, rather than by continuous excretion (Babica et al., 2006).

Microcystins are hepatotoxins and the most frequent cyanobacterial toxins in freshwaters. Microcystin-LR, primarily produced by Microcystis aeruginosa, is the predominant variant of microcystins (Freitas et al.,, 2015). The mechanism of the toxicity of microcystin-LR in plants is well recognized and consists of the irreversible inhibition of protein phosphatases 1 and 2A (PP, PP1 and PP2A) by covalent binding and promotion of oxidative stress (Pflugmacher et al., 2006; Máthé et al., 2013).

Neurotoxins are a group of compounds that have clear biological effects on the nervous system but differ in chemical structure and action (Rutkowska et al., 2019). Saxitoxins are found in marine dinoflagellates and freshwater cyanobacteria including Raphidiopsis raciborskii, a common specie in Brazilian water reservoirs (Huang and Zimba, 2019; Pedrosa et al., 2020). Saxtoxins cause VGSC blockage and also prolong gating of potassium channels, however,    there are only few studies reported in the literature on the effects of cyanoabacterial saxitoxins on crops and plants (Corbel et al., 2014; Christensen and Khan, 2020).

Lettuce (Lactuca sativa L.) belongs to the family Asteraceae; it is an annual plant, herbaceous, with growing leaves and rosette shape, around a small stem, with variations in the shape of smooth and curly (Azevedo et al., 2013). Produced worldwide, it is considered the most popular vegetable by the population due to its high nutritional value. Coriander (Coriandrum sativum L.) is an annual herbaceous vegetable belonging to the Apiaceae family, native to  the  Mediterranean  Sea basin (Silva et al., 2013). In Brazilian semiarid, coriander and lettuce have a high market value, in import and domestic production (Silva et al., 2012). Therefore, the accumulation of cyanotoxins in the terrestrial food chain is at present remains more worrying and the proposed quality limits are rare; indeed, many aspects concerning these toxins are particularly scarce, notably those relative to the fate of cyanotoxins in the soil ecosystems and their toxicity and bioaccumulation on agricultural crops.  Due to the limited information, the purpose of this study is to evaluate the effects of microcistin-LR and saxitoxin on germination, growth and micronuclei formation in lettuce and coriander.

Lettuce (L. sativa L.; Elisabeth cultivar) and Coriander (C. sativum L, Verdão cultivar) seeds were bought form local commerce. The experiments were carried out in Ecotoxicology of Semiarid Laboratory of Brazilian National Semiárido Institute. Purified cyanotoxins (Micorcystin-LR and Saxitoxin) were obtained from Abraxis (Abraxis, LCC, USA). The experiments were composed by two factors (plants), three treatments (control, microcystin-LR and saxitoxin) with three levels (concentrations) (Figure 1). The microcystin-LR (MC-LR1= 0,4 µg/L; MC-LR2= 1,0 µg/L; MC-LR3= 5,0µg/L) and saxitoxin (SX-1= 0,02µg/L; SX-2= 0,1µg/L; SX-3= 0,4µg/L) concentrations selected for this study were more frequently observed in Brazilian Semiarid water bodies (Moura et al. 2018, Pedrosa et al. 2020), facilitating the comparison of the laboratorial studies with real case scenarios.Before the experiments, all seeds were sterilized with hypochlorite (0,1%) for 10 min and then washed with Ultra-pure water.  Seeds of two plants were placed on double layer of Whatman Nº 1 filter paper as seed beds in petri dishes. Each Petri dish was provided with 3mL of different cyanotoxins and concentrations. Each Petri-dish was replicated five times each containing 20 seeds to lettuce and 10 seeds to coriander. Ultrapure water was used for the control. The Petri dishes were monitored for 7 days to lettuce and 9 days to coriander, under dark conditions at 25 ± 0.5°C and 80% humidity.

After incubation for 24 h, the Petri dishes were opened under safe-light for initial seed germination count, using 2 mm in length of radicular protrusion as a criterion. At the end of the cultivation, the primary root length (PRL) and epicotyl length (EL) were measured. The variables evaluated were germination percentage (GP), germination time (GT) and germination velocity index (GVI), calculated according to Carvalho and  Carvalho (2009).

The roots tips of lettuce and coriander plants used in each treatment were processed according to Pourrut et al. (2011)to observe the genotoxicity induced by cyanotoxin. The root tips were washed with Ultra-pure water and fixed in Carnoy’s solution at 4°C until analyses.  After fixation, the roots were maintained in phosphate buffer saline solution (pH 7.4) for 10 min and then hydrolyzed in 1 N HCl for 15 min in a 60°C water bath. The root tips were colored with acetic carmim 1%.  Then the root tip ends were cut, macerated and placed on glass slides. Three slides were prepared for each replicate. The prepared slides were examined under 100 × magnification using a trinocular fluorescence microscope (Axion Imager A2®) to observe MN frequency.

Results were statistically tested through analyses of variance (ANOVA) while LSD test was performed to measure significant effects of the treatment. All analyses were performed in R Studio (R Studio Team, 2015).

Exposure of coriander seeds led to a significant decline in germination, especially with microcystin-LR treatments. Most failure of germination was recorded in MC-LR3 treatment; only 20% germination occurred in MC-LR2. SX-1 treatment was the least affected. No Radicle necrosis in coriander was observed (Table 2).

Germination of lettuce seeds began after 24 h in all treatments; however, GT of seeds exposure to microcystin-LR was significantly higher than control. To saxitoxin, the opposite was observed, an increased approximately two times to GT in SX-2 and SX-3 treatments (Table 1). Coriander seed germination began after   4  days   of  experiments  in  control  treatment.  To microcystin-LR and saxitoxin the GT was approximately 6 and 7 days respectively (Table 2). Exposure of lettuce to microcystin-LR increased the VGI; however a decline was observed in saxitoxin treatments (Table 1). To coriander both cyanotoxins cause decline in VGI with cyanotoxin concentrations increasing (Table 2).

Microcystin-LR and saxitoxin had significant inhibitory effects on seedling development. PRL and EL development were inhibited by cyanobacterial toxin, in both plants; the sprouts were smaller, and seed coat in most cases was removed from primary leaves. In lettuce, the PLR reduced 1.4 times and 7.5 times in Microcystin-LR and Saxitoxin, respectively. In coriander, PLR was more affected by exposure to saxitoxin (~10 times lowest than control).  The lowest PRL values were found in SX-3 treatment in both plants (Figure 2). The EL was more affected in saxitoxin treatments (2 times smaller than control) in both plants (Figure 3). The root samples of lettuce exposure to MC-LR1 and SX1 treatments did not show significant differences in MN formation with control, but MC-LR2, MC-LR3, SX2 and SX3 presented 20-57,3% of cells with MN formation. In coriander roots there was a high incidence (~70%) of cells with MN, under high cyanobacterial toxins concentration (Figure 4). 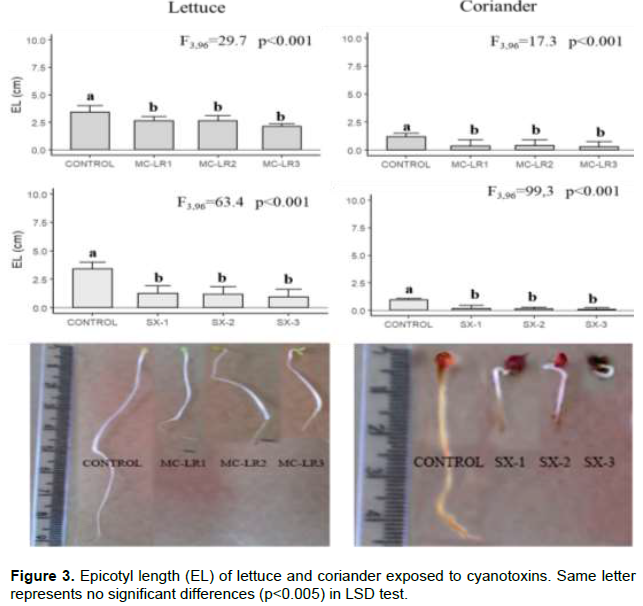 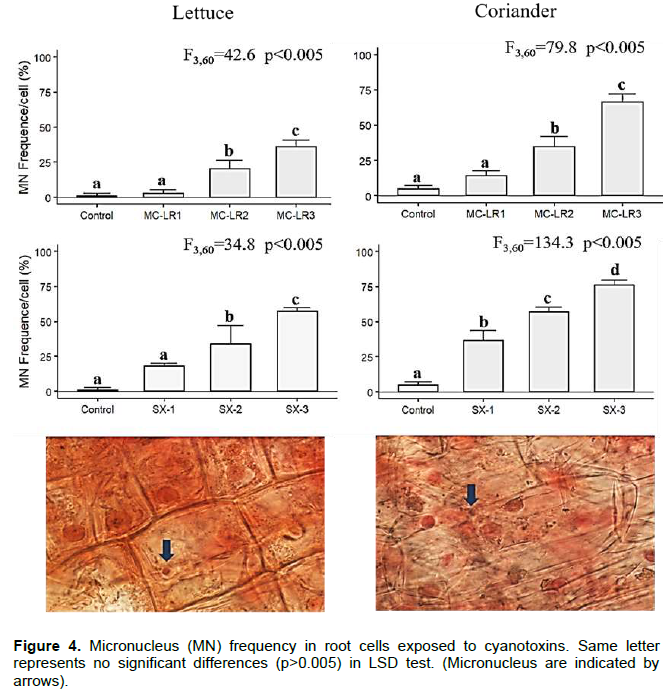 We did not observe deleterious effects in lettuce germination induced by microcystin-LR. This may reflect a hormesis effect, where low concentration of microcystin-LR can lead to stimulation of germination process, confirmed by high VGI, in defenses to toxicant (Bibo et al., 2008; Machado et al., 2017). Low concentrations of microcystin-LR induced an increase of mitotic activity as well as early and late mitosis indices in Phragmites australis (Máthé et al., 2009). The higher energetic cost needed to fight the toxic may have induced the occurrence of necrotic cell in lettuce seedlings.  Microcystins can induce necrosis in a significant number of plant species (Jámbrik et al., 2011; Corbel et al., 2014). The main cause of limitation in germination by microcystins is related to inhibition of protein phosphatases. These are regulatory enzymes, and their inhibition causes hyperphosphorylation of proteins, changing their activity status (Máthé et al., 2013); this happens to coriander seeds.

Our results  indicated  that saxitoxin affects germination in low concentration, however, to coriander, we observed minor damages. Effects of saxitoxin in vegetables are poorly characterized in the existing literature (Corbel et al., 2014), but can be associated to speed of opening and closing of Na+, Ca2+ and K+ channels could modify ions transport in plant cells and consequently modification in cell osmotic pressure (Christensen and Khan, 2020).

In addition to the inhibitory effect on seed germination, cyanotoxins could also have a negative impact on the growth of the seedling (Chen et al., 2012), as observed in this study. Microcystin-LR and saxitoxin induce oxidative stress in plants playing a primary role in growth impairment (Azevedo et al., 2014). There is evidence   that  certain  cyanobacterial  toxins  are genotoxic. Our results demonstrate that MN formation was too concentration dependency of cyanotoxins and plant species, although, more MN frequency was observed insaxitoxin treatments and Coriander roots. MN formation induced by microcystin-LR is reported in Vicia faba (Máthé et al., 2013), Allium sp (Máthé et al., 2009), Phragmites australis (Beyer et al., 2012) and Sinapsis alba (Laughinhouse et al., 2012), but the mechanisms of their potential are not well understood. This finding is consistent with the concentration dependent increase of both toxins on TMG and IVG in MN formation in plant species exposed to microcystin-LR in our study. Two main mechanisms have been pointed in relation to this: abnormal organization of mitotic microtubles and hyperphosphorylation   of     histone    H3.   These processes can be correlated directly to the protein phosphatase inhibitory effect of the mcrocystins (Garda et al., 2016).

Our study is pioneering to investigate MN formation induced by saxitoxin in plants, so complementary studies are necessary to elucidate gaps remaining concerning information of the mechanism in plants. In animal cells, MN formation saxitoxin induced is related to significant increase in oxidative stress levels (Melegari et al., 2012). The exposition to cyanotoxin disposed deleterious effects on coriander and lettuce germination, growth and DNA. Furthermore, plants can accumulate cyanotoxin(Bittencourt-Oliveira et al., 2015; Nery et al., 2020), so use of water from sources containing cyanobacterial blooms and toxins   in   plants   can   induce    a    food    chain  contamination with considerable health risk and potential economic losses.

Cyanotoxins inhibit seed germination, growth and cause DNA damages, but the intensity depends on both the nature of the toxin and plant species.  L. sativum is less sensitive than C. sativum to cyanotoxin. Saxitonxin is more toxic than microcystin and causes DNA damages, even in low concentration. Accordingly, exposure of crops to cyanotoxins through irrigation with cyanobacterial toxic bloom might exert adverse consequences on our economy and public health. New researches are necessary to evaluate the mechanisms of action of saxitoxin in plants.