The wheat quality and yield may be limited or compromised by several factors in the field, being the climatic main factor at the end of the crop cycle. The aim of the study was to determine whether different harvest times affect crop yield and wheat grain quality; four experiments were conducted, differing by cultivars type and sowing time, at Ponta Grossa city, PR, Brazil. The experimental design used for both cultivars (BRS-Pardela and Quartzo)  were randomized complete block with five grain moisture content at harvest time (30, 25, 20, 15 and 13%) being 4 replications. For the first sowing time, the different harvesting times had no effect in yield, falling number (FN) or hectoliter weight (HW) for both cultivars. In the second sowing time, the yield components and yield for both cultivars were not affected by the different harvest times. A linear and quadratic decrease on the pH with the delaying of harvest time was noticed for BRS-Pardela and Quartzo, respectively, for the FN only the BRS-Pardela showed quadratic reduction delaying the harvest time.

Wheat crop (Triticum aestivum L.) is important cereal crop because it is increasing the demand of the population for these cereal products, making it important to the economies (Seghezzo and Cuniberti, 2010; USDA, 2011). As a result, there are research institutions in various regions with breeding programs and management aiming higher yield. In addition to yield, wheat grain must also possess desired technological quality by the industry, thus avoiding the use of additives for reasons of cost and food security (Franceschi, 2009).
Yield and quality of wheat grains  can  be  defined  as a result of interaction between what the culture suffers in the field, the effect of ground conditions, the management of culture, cultivate, harvest and weather conditions (Edwards, 2004; Shewry et al., 2003). The weather has a profound impact on production and helps explain why different parts of the world produce wheat with better quality (Bozzini, 1988). In Southern Brazil, the main pr oblems are the high moisture content of the air in September and October, the high temperatures in the grain filling stage, the possibility of hail and frosts in silking and rains at harvest (Franceschi, 2009; Noda et al., 1994).
The high rainfall after wheat physiological maturity influences negatively the hectolitre weight, thousand grain weight, number of fall, the P/L and grain yield due to increased severity of disease and enzyme activity (Guarienti et al., 2003, 2005).
The grain moisture content at harvest is directly related to the resistance of grain to mechanical damage and the humidity range from 13 to 15% is considered ideal for the harvest, depending on the cultivar. The late harvest, after physiological maturity contributes to undesirable changes in the technological quality of wheat (Carneiro et al., 2005). One option to improve grain quality is an early harvest. To this end, the producer must take into account the need and availability of drying, the risk of deterioration and energy spent on drying (Carneiro et al., 2005; Embrapa, 2010; Quick and Buchele, 1978).
The early harvesting process after physiological maturation can be an alternative to obtain a product with appropriate industrial quality, when there are high levels of starch, protein and water, preventing the grain to be exposed longer to diseases such as fungi producing mycotoxin (Carneiro et al., 2005).
The early harvesting can affect the number of fall (Falling Number) and hectolitre weight, among other characteristics of wheat grain, being necessary to assess whether the moisture content at harvest interfere in these characteristics of grain.

Four experiments were conducted in the city of Ponta Grossa – PR, Brazil. The experimental design used in the four experiments, which differ by sowing date and cultivar was randomized blocks, with 5 moisture content at harvest (30, 25, 20, 15 and 13%) and 4 repetitions. In all experiments, the plots showed 8.0 m long and 6.0 m wide and useful production area of 6.0 × 4.0 m. The moisture content at harvest was obtained within the range of physiological maturity (30%) and the moisture content for wheat storage (13%). The cultivars used were Quartzo and BRS-Pardela.
The harvest dates for each treatment, for both varieties are shown in Table 1. Wheat was grown at no tillage system with soybean as the previous crop. The first sowing was done on June 11th 2013 and the second was done on July 3th of the same year. As fertilization, 300 kg ha-1 of 14-34-00 was carried out at the sowing time. At the beginning of the tilling stage, 40.5 kg ha-1 of nitrogen and 60 kg ha-1 of K2O was applied as coverage fertilization. The seeding rate used in two seasons and in both cultivars was 75 viable seeds per meter, 0.17 m spacing between rows and average depth of seeding 0.04 m. 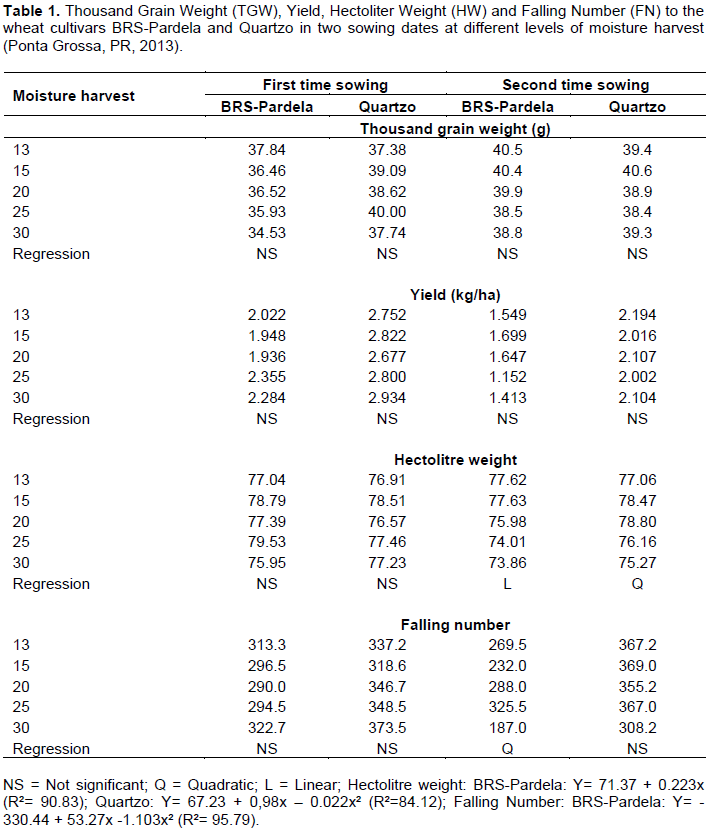 When the grains have reached the mature stage (Table 1), hand sickles were used to harvest the plants, and one meter of plant row was sampled for the assessment of yield components. The meter of plant row per plot was evaluated on the number of ears; the number of spikelets per spike, grain per spikelet and also the weight of a thousand grains. The yield was determined by the useful production area of each plot and its moisture was corrected to 13% being the value converted into kilograms per hectare.
Of harvested wheat, grain was also evaluated with industrial quality: hectolitre weight (HW) and falling number (FN). The HW was measured in the Laboratory of Plant Science at the State University of  Ponta  Grossa  through  the  DALLEMOLLE  balances and the FN in CONAB company by the apparatus of brand Perten model FN 1700.
Data were subjected to analysis of variance by F test and the differences among the averages of the different moisture contents were analyzed by polynomial regression.
Correlation analysis was performed to verify a possible relationship between the meteorological variables and industrial quality variables. For this, they were calculated in average maximum and minimum temperature and precipitation for harvest period, the sum of rainfall, the amount of days of rainfall and days when the plant was in the field after physiological maturity. For the interpretation of correlation coefficients (r), the table proposed by Shikamura (2014) was used.

The moisture content at harvest did not affect the weight of a thousand grains (WTG) and yield of both cultivars in the two sowing dates (Table 1), as the harvest seasons were very close, with no weather changes (rainfall and temperature) substantially between treatments (Figure 1). This indicated that probably are needed sharp changes in temperature and rainfall to affect WTG.Guarienti et al. (2003) observed reduced WTG and yield due to high temperature (above 35 °C) in the grain filling period. They also indicated that the grain fillers stage there is influence of temperature, precipitation and solar radiation in WTG and grain yield, but the harvest time in this work were carried out after physiological maturity, that is, low temperature variation between treatments in the grain filling period and thus the WTG and yield were not affected. 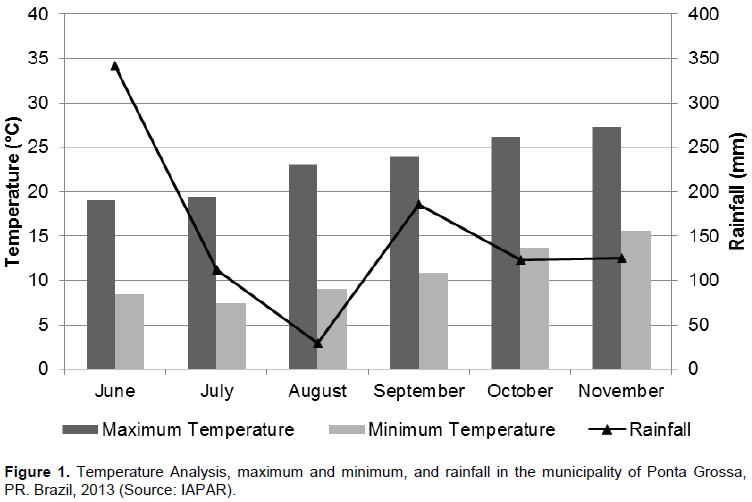 Frequent rainfall after their physiological maturity is more detrimental to the THG, the HW and the FN to high rainfall in fewer days. The larger is the period that the culture is in the field exposed to climate variations, is more damaging to industrial grain quality and to minimize these effects, the anticipation of the harvest becomes an interesting option, it does not affect yield since is performed after physiological maturity.