The use of inorganic fertilisers for agriculture is relatively expensive worldwide (Dopler, 1980; Osman et al., 2009) and in particular  Africa  (Sanchez, 2002). This cost has been particularly pronounced in hydroponic systems which rely on use of the same expensive inorganic fertilisers. Though hydroponics can be an  important  crop production solution in water limited countries like Namibia, not all communities can afford to practice horticulture using conventional hydroponics. This has been the drawback for many even around Henties Bay where this technology has been demonstrated for years to the local community by Sam Nujoma Marine and Coastal Resources Research Centre (SANUMARC). This situation can partly be addressed by development of cheaper, alternative fertilizers such as using manure for hydroponics.
Generally, organic nutrient solution for hydroponics is a fairly new practice despite the similarities in plant growth when either conventional or organic fertilizer is applied on soil (Liang et al., 2014). It was not until the early 1990s when liquid manures for hydroponics were introduced. Challenges emerged such as organic fertilizer being unsuitable to plant growth (Garland et al., 1997; Liedl et al., 2004), because nitrogen in manure is predominantly organic, hence unusable by plants. The forms of nitrogen absorbed by plants are nitrate and ammonium (Strayer et al., 1997). Therefore, the nitrogen in manure requires to be mineralised prior to use by plants hydroponically.  Several studies including Garland et al. (1997) and Shinohara et al. (2011) have demonstrated that using microorganisms to degrade organic nitrogen in organic sources such as manure results in nitrates and ammonium production which in turn are used for plant production.
Therefore, the current study investigated the efficacy of an organic hydroponic nutrient solution on plants’ performance. The organic nutrient solution was processed from goat manure using a specialized culture of microbes from natural compost.

Experimental setup
To determine the effect of the organic hydroponic nutrient solution on growth and yield of tomato, hydroponic tables (22.8 × 250 × 150 cm3) constructed from planks and black sheeting were used in a greenhouse at the Sam Nujoma Marine and Coastal Research Centre (SANUMARC), Henties Bay. Styrofoam that completely covers the hydroponic tables yet float on water in the table was added. Each hydroponic table covered an area of 3.75 m2. A randomized complete block design (RCBD) with three treatments (organic nutrient solution, conventional hydroponic fertiliser (as positive control) and plain tap water (as negative control)) replicated three times in this experiment. Each replicate was a hydroponic table of 6 plants and served as an experimental unit. Organic nutrient solution was formulated in 2016 at SANUMARC, Henties Bay using natural compost containing ammonia and nitrite oxidising bacteria to convert organic nitrogen into nitrates from goat manure. The control treatment was a nutrient solution made from the conventional hydroponic fertilisers; Calcium Nitrate and Hygrotech. The final nutrient solution made from the 2 fertilisers consisted of: Calcium (Ca) 217 mg/L, Nitrate (N) 225 mg/L, Phosphate (P) 46.5 mg/L, Potassium (K) 372 mg/L, Magnesium (Mg) 58 mg/L, and Sulphur (S) 141 mg/L. Organic nutrient solution had Nitrate (N) 198 mg/L, Phosphate (P) 42.1 mg/L, Potassium (K) 360 mg/L, Magnesium (Mg) 67 mg/L, Sulphur (S) 198 mg/L, and Calcium (Ca)  250.
The formulated organic hydroponic nutrient solution was therefore compared with the conventional nutrient solution according to the method by Shinohara et al. (2011) and the negative control. Determinate tomato seeds were germinated on coconut husks in polystyrene trays on 23 February 2017 and transplanted into 3 treatments (conventional fertiliser and organic nutrient solution and plain water) on 24 March, 2017.
Twenty days after transplanting, vegetative response variables were recorded at fifteen days intervals from each treatment (Liu et al., 2014).
Vegetative growth
Response variables included plant height (cm) measured from the ground to the main apex, number of leaves and stem diameter measured 10 cm above the root level.
Reproductive growth
The reproductive parameters included number of flowers per plant, number of fruits per plant, average fruit weight (g), yield (kg) per plant and yield (kg) per treatment. In order to determine yield, tomato fruits were picked and weighed when they had reached full maturity at harvest time (Mehdizadeh et al., 2013).
Statistical analysis
Means comparisons analysis were applied whereby a One-way Analysis of Variance (ANOVA), followed by mean separation by Least Significant Difference (LSD) was used when ANOVA determined that the effects of the treatments were significant (p < 0.05 for F-test). 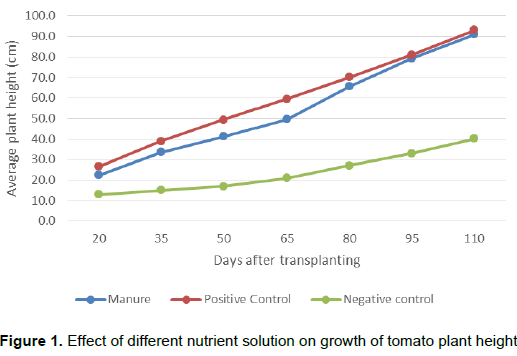 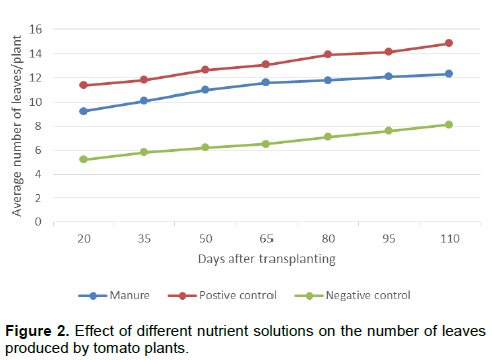 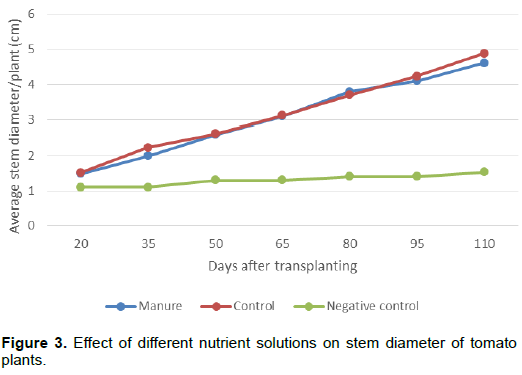 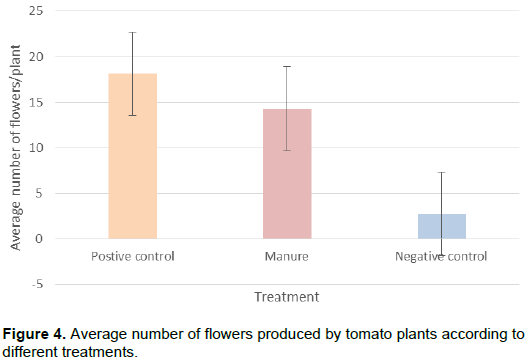 Figure 5 indicates that there were more fruits produced by tomato plants grown under conventional hydroponic nutrient solution than those grown under manure nutrient solution and tap water. ANOVA results uphold the observed  trend  in  Figure 5, by  indicating that  these differences are significant (P=0.000). 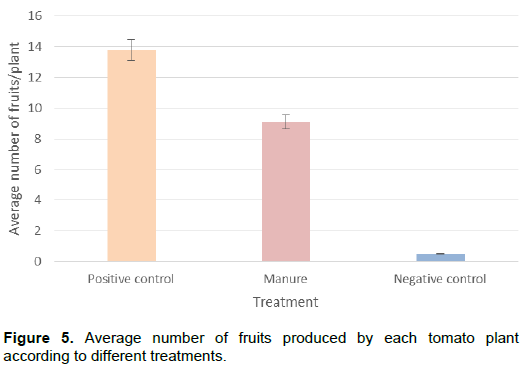 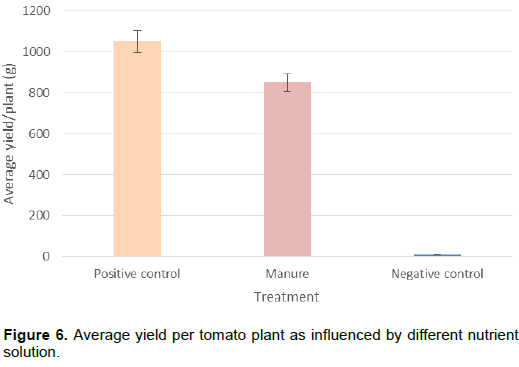 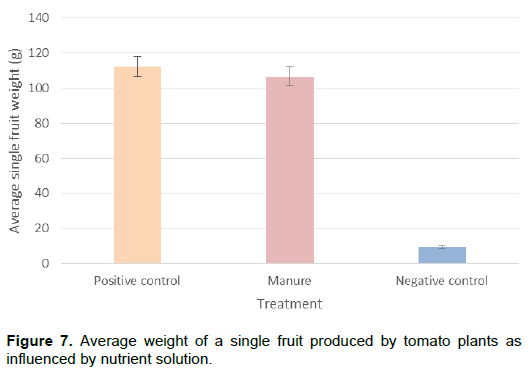 The organic nutrient solution formulated from goat manure positively improved plant growth and yield performance of a tomato crop, and provided a technique feasible and alternative to conventional hydroponics. This is particularly significant to communities living in Namibian areas where fertilizer access, water or fertile soil are limiting factors to horticultural production in that locally available waste resources can be added value to and used as the main input for horticultural production.
These results open further possibilities for other crops currently grown in hydroponics using conventional fertilisers and being baseline for Africa in terms of organic hydroponics and provided a foundation for further research in this regard.