Stem rust (Puccinia graminis f.sp.tritici) is a major disease of wheat that occurs more in the main wheat growing regions of Kenya. The objective of this study was to assess the incidence and severity of wheat stem rust during the 2015 growing season. A survey was conducted in Mau-Narok, Njoro and Kabatini regions. During the survey work, 149 small scale wheat growers’ fields were assessed. The results revealed that stem rust incidence of the three surveyed areas ranged from 11.3 to 77.8% and severity 20 to 60%. The survey confirmed that the incidence and severity were associated with the farming practices such as chemical control, varieties grown, use of certified or uncertified seed and cropping systems. The survey showed that high to moderate incidence and severity levels were found on fields with one or two sprays with a fungicide. The use of fungicide was the major practice by growers for stem rust control reporting Mau-Narok with 43.2%, Kabatini 38.9% and Njoro 17.8%. The varieties grown had a relationship to disease incidence and severity percent levels. The use of uncertified seed by farmers contributed to high disease incidence. About 50.6% growers preferred old varieties mainly Robin and NjoroBWII. About 97.8% of the farmers practiced crop rotation of wheat with legumes. A multi-tactic disease management approach mainly two fungicide sprays per growing season, use at recommended rates, planting of certified seed of resistant varieties and crop rotation of legumes with wheat are required as stem rust effective management strategies.

Wheat (Triticum aestivum L.) is one of the worlds’ most productive and important crops in the 21st century (Curtis and Halford, 2014). It is one of the key staple crops for global food security, providing more than 35% of the cereal calorie intake in the developing world, 74% in the developed world and 41% globally from direct consumption (Shiferaw et al., 2013). Due to increased consumption and demand for grain, for food (Curtis and Halford, 2014) wheat yields must be increased as this is seen as an important strategy to prevent food shortages (Curtis and Halford, 2014).
Wheat is the second most important cereal staple food after maize in Kenya (USAID, 2010). In Kenya it is grown mostly in the Rift Valley, some areas of upper Central province (Nyandarua, Nyeri) and parts of Meru (Timau) (USAID, 2010). Inspite of the importance of wheat, plant disease is still a major constraint to its production. Plant diseases have been reported to reduce crop yields worldwide, leading to significant crop losses (Khoury and Makkouk, 2010). Stem or black rust, caused by Puccinia graminis, has historically caused severe losses to wheat production worldwide (Njau et al., 2009).
In most wheat-growing regions of the world, existing environmental conditions will favour stem rust infection, which at times leads to epidemic buildup (Singh et al., 2011). The situation is worsened by the fact that susceptible wheat varieties are grown over large areas and that a large proportion of current breeding materials are susceptible to stem rust race Ug99 and other newly identified races. It implies therefore that the stem rust pathogens have the potential to cause a wheat production disaster that would sourly affect food security (Singh et al., 2011).
Disease assessment is an essential task in the study of plant disease epidemics and vital to the knowledge of whether disease management practices are successful (Campbell and Neher, 1994). Disease severity evaluation is an important decision support for adoption of strategies and tactics for disease control. The most commonly used method to assess disease severity is visual (Bade and Carmona, 2011). Disease severity is determined by a function of the degree of infection, colonization, and damage of host tissues. Besides the amount of host development and growth is a function of disease severity (Gaunt, 1995).
Integrated disease management (IDM), which combines biological, cultural, physical and chemical control strategies in a holistic way of disease control as opposed to using a single component strategy is a better option apart from being sustainable (Khoury and Makkouk, 2010). It can be defined as a decision-based process involving coordinated use of multiple tactics for optimizing the control of the pathogen ecologically and economically (Khokhar and Gupta 2014). In practice and in most cropping systems today, emphasis is still being placed on a single technology (Khoury and Makkouk, 2010). Many problems have been associated with the use of fungicide such as the frequent emergence of fungicide resistance in pathogens and the harmful effects of fungicides to human health and the environment (Khoury and Makkouk, 2010).
Wheat production in Kenya mainly takes place on large- and medium-scale farms, using capital intensive technology. The technology on the medium- and large-scale farms is the same as that in Western Europe (Monroy et al., 2013). In contrast, small scale farms operations are smaller as compared to the large and medium (Monroy et al., 2013). The small scale wheat farmers complain of prohibitive production expenses and low production (caused by use of non-certified seeds and low use of inputs) and sub-regionof land as a major problem (MOA, 2013). Most large scale farmers are still holding stakes of wheat (Monroy et al., 2013). The cost of key inputs such as seed, pesticides is high for resource-poor farmers. Such high costs lead to low application and adulteration of inputs (GOK, 2010).
The main aim of this study was to assess the differences in disease incidence and severity in the major growing regions. The information on disease levels as connected with the farming practices’ being carried out in the regions was not there. Therefore, the survey conducted was to determine the effectiveness of the management and control measure used in the regions.

General information and percentage of the surveyed regions
A survey was conducted in three regions of Nakuru county, Njoro, Mau-Narok and Kabatini regions which represented 25.7, 35.1 and 39.2% respectively of the study area (Figure 1). The surveyed fields were early planted by the farmers during the 2015 season. In Mau-Narok, there were two major cropping seasons, early and late while, Njoro and Kabatini had one which were planted early. Only the fields with the early crop were surveyed in Mau-Narok. Most growers’ small scale had planted early in Mau-Narok while most medium and large scale farmers planted late. 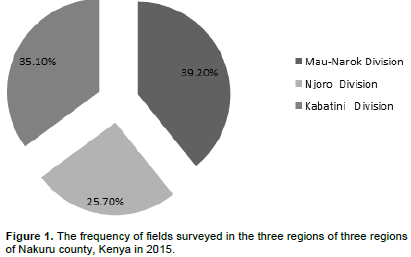 The locations surveyed in Mau-Narok region were Sururu, Mwisho Wa Lami, Likia and Mau-Narok. Mau-Narok had an average annual rainfall of 1300 mm, an altitude of 2900 m above sea level (masl), minimum and maximum temperatures range of 14°C and 26°C, respectively (Jaetzold et al., 2010) The second region was Njoro which had five locations mainly Piave, Lower Piave, Njoro and Kerima. Njoro region had an altitude of 2185 masl, average annual rainfall of 935 mm, and minimum and maximum temperatures of 9.7°C and 23.5°C, respectively. The third region was Kabatini having four locations mainly Karunga, Ngecha, Thayu and Ruguru which had many wheat growers. Kabatini had an altitude at 2135 masl with a minimum temperature of 10€C and maximum temperature of 26°C, and annual rainfall of 800 mm (Jaetzold et al., 2010).
Field survey
A questionnaire check list was used during the study. The part one of the questionnaire was about the general information, the name of the division, location and farm classification. Farm classifications were mainly three; small (<10 ha), medium (10-60 ha) or large scale (>60 ha) farms, adapted from MOA (2006). The second part of the questionnaire was about the farming practices in place, fungicide used, rate used and number of sprays. The other questions were about the wheat varieties commonly grown (FAO-SEC, 2012).
Sample size for disease assessment
A multi stage sampling technique was applied where fields were grouped as small, medium and large scale in the three regions of Mau-Narok, Njoro and Kabatini. The sample size of growers selected was done following the formula from Krejcie and Morgan (1970) as shown below;

S = required sample size, X2 = the table value of chi-square for 1 degree of freedom at the desired confidence level (3.841), N = the population size, P = the population proportion (assumed to be 0.50 since this would provide the maximum sample size), d = the degree of accuracy expressed as a proportion (0.05). The total sample size was 58 in Mau-Narok, 38 in Njoro and 52 in Kabatini regions.
Assessment of disease intensity using incidence and severity percentages
A quadrate of 1 m by 1 m was used for both disease incidence and severity on the same field, and 1 m2 used to obtain the two disease values. The incidence was the number of plant infected by disease and severity the percentage of foliage attacked by disease on the same plant. The stage of the wheat crop assessed was Zadoks GS 73 (early milk), GS 75 (medium milk), GS 77 (late milk), GS 83 (early dough) and GS 85 (soft dough) (Zadoks et al., 1974) which was wide-ranging from field to field across the study areas.
Disease incidence for three study areas
A quadrate was cast in the field randomly for the total number of farms visited. The proportion of stem rust infected plants to the total number of plants in the quadrate was calculated from the FAO-SEC (2012) formula as shown below:

Disease severity for three study areas
The same fields and plants used for disease incidence deter-mination were scored for disease severity. Disease scoring was done following the modified Cobb scale as described by Peterson et al. (1948).
Data analysis
Data was input for analysis using the descriptive statistics, frequencies and cross tabulation. The frequencies were in percentages for all the entities. The entities included regions, locations, farm classification, fungicides used, the rates and number of sprays. The percentage for varieties grown, fertilizer use, seed source and a yes and no response for wheat grain yield as being high, medium and low was done. Each component was worked out in percentages among the three regions and arranged in tables accordingly. 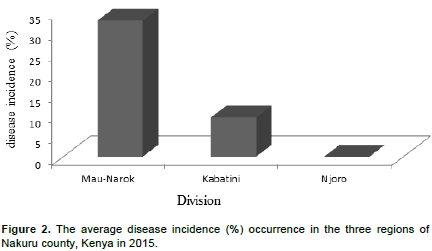 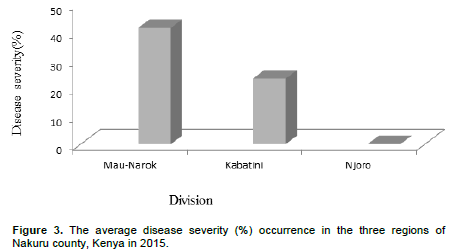 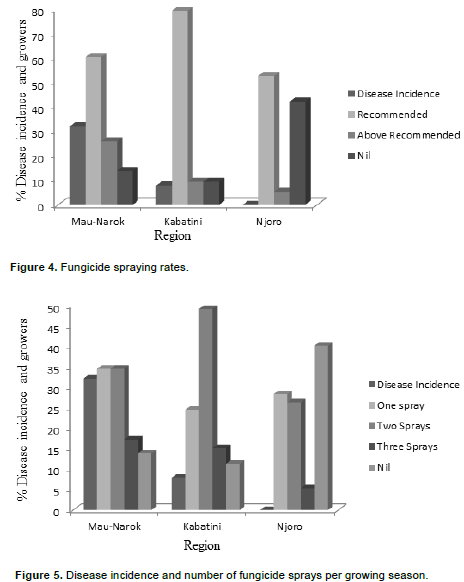 The connection between the number of sprays and disease incidence percentage is shown in Figure 6, where the two sprays per growing season had 0 to 13.8% and three sprays had 0%, one spray had 36.8 to 77.8% diseases incidence. A higher percentage of growers using fungicides were found in Mau-Narok, followed by Kabatini and Njoro. As compared to Njoro and Kabatini, Mau-Narok had the highest percentage of growers of the earier mentioned recommended rates which were 5.3, 9.4 and 25.9%, respectively. Njoro regionhad a great number of fields that were not sprayed at 42.1% as compared to Mau-Narok 13.8% and Kabatini 11.3%. Despite the use of the earlier mentioned recommended rates by growers in Mau-Narok disease incidence was moderate to high (Figure 2). In Njoro, during the growing season there was no disease, and growers sprayed only once or did not spray. In Kabatini, most of the growers sprayed twice at the recommended rates. 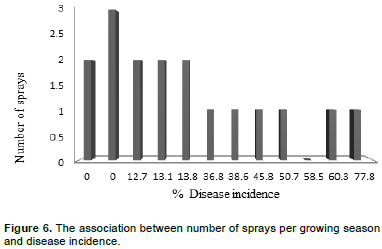 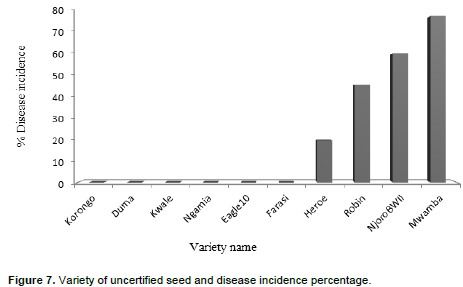 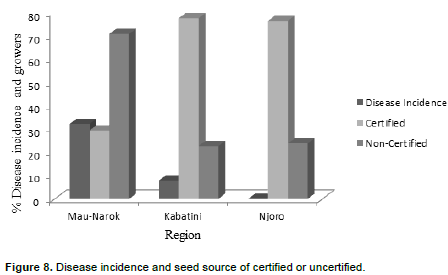 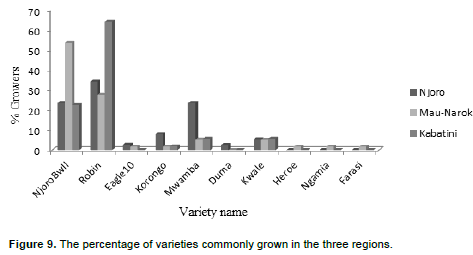 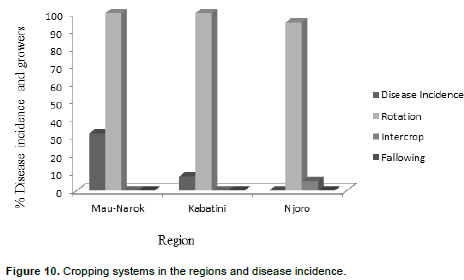 Stem rust disease incidence and severity % were reportedly high in Mau-Narok, followed by Kabatini which had low levels and Njoro having none. However, the disease incidence and severity was associated with the management practices. Two or more sprays at the recommended or above recommended rates showed either no or low disease incidence or severity. In addition, the variety grown and seed quality determined disease incidence and severity. The use of uncertified seeds of susceptible varieties increased disease levels. A multi-tactic approach involving optimal use of fungicides, resistant varieties, quality certified seed and crop rotations with legumes would be the best option for stem rust disease control. Similarly, as a result of diminishing land sizes under wheat (crops) farming practices in place have to be intensified and maximized based on modern agricultural technologies for food security. Work needs to be done on the verification and validation for an effective integrated disease management approach for stem rust disease.

The study was supported by the East Africa Agricultural Productivity Project (EAAPP) and Kenya Agricultural Livestock and Research Organization (KALRO).