Comparison of Grafting Techniques and their Effects on some Growth Parameters of Ten Elite Cocoa Clones (Theobroma cacao L.)

Cocoa productivity in Côte d’Ivoire has been on a downward trend for the last decades due to many factors key among them being the non-availability of quality planting materials. However, some elite clones developed in the country are available and need to be adopted by farmers. This study was conducted in Soubré, Côte d’Ivoire to evaluate the grafting techniques (top grafting and budding) success of 10 elite cocoa clones and their effects on selected growth parameters in the nursery and field. Experimental design was a split plot with grafting technique as main factor and clones as subplot treatment replicated three times. Data were collected on shoot emergence 1 to 5 weeks after grafting (WAG) and grafting success at 10 WAG. Our results showed shoot emergence from top grafting but not on budding 1 WAG. In addition, the number of leaves was high in top grafting (11) compared to budding (5); the same trend was observed in the field. There were no significant differences between both techniques for the grafting success; meanwhile success was 77% and 68% for top grafting and budding, respectively. However, there was better vegetative growth on seedlings grafted using top grafting than budding and this technique seems to be the best to graft cocoa in the nursery.

Cocoa (Theobroma cacao L.) is a neotropical, small, evergreen tree and native to the undergrowth of the Amazon forest (South America) (Wood and Lass, 1985), and belongs to the Malvaceae family. It is cultivated around the world, for its seeds used in the manufacture of chocolate,  its   derivatives  and  cosmetics. It  is  a  major source of income for developing countries, especially in Côte d’Ivoire, the world’s largest cocoa producer, which grows more than one third of the world’s supply. The production of cocoa in Côte d’Ivoire in 2013 to 2014 went over 1.7 million tons (CCC, 2014). Nevertheless, the increase  of   the  cocoa  production  in  Côte d'Ivoire  has been mainly carried out by increasing acreage, causing the degradation of the natural resources in the remaining tropical forest. In addition, many studies revealed that 20 to 30% of the Ivorian cocoa orchards are old and trees that produce less cocoa over time are more prone to pests and diseases (Aguilar et al., 2005; Kéli and Assiri, 2001).

In order to revitalize the unproductive cocoa trees, cocoa growers need to access the high yielding elite planting materials. The current distribution of cocoa hybrid seeds to farmers is not meeting the ever-increasing demand. Moreover, the use of hybrids is known to produce high degree of genetic variability. In Côte d’Ivoire, 71% of cocoa trees are from seeds collected from unselected planting materials (Pokou, 2008). Irizarry and Rivera (1998) reported that only 2 to 3% of the cocoa trees in a population of high-yielding families account for 60% of the total yield, because of the high heterozygous nature of seedlings.

On the other hand, high yielding cocoa clones known for their genetic stability exist in research stations, but have not yet been released to farmers. Clones are easily propagated through grafting (Mng’omba and du Toit, 2006). One advantage with grafting technique is that new plants are identical to the original plant. Furthermore, the technique can be easily executed by farmers. Grafting has successfully been used for vegetative propagation of species such as mango (Mangifera indica), bush mango (Irvingia gabonensis), Akpi (Ricinodendron heudelotii) and Allanblackia spp. (Mng’omba et al., 2010; Munjuga et al., 2013). Grafting is known to shorten the period between flowering and fruiting. Grafting on mature cocoa trees has been demonstrated to double cocoa yield within two years (ICRAF, 2014). This propagation method can also be performed on young seedlings. Several grafting methods exist; among them are top grafting, budding, whip, and whip and tongue. The choice to be used in any particular plant depends on the grafting success. Budding in cocoa has been used for the multiplication of elite clones and has been shown to be expedient in rehabilitating unproductive cocoa trees (Eskes and Efron, 2006). According to Effendy et al. (2013), budding increases production and also stimulates flowering and fruits in cocoa. The most successful method for Allanblackia parviflora is top grafting while budding is the best method for Allanblackia floribunda (Munjuga et al., 2011).

Based on review of available literature, there are no reports on grafting cocoa clones on seedlings in Côte d’Ivoire. The objective of this study was to compare the grafting techniques (budding and top-grafting) and their effects on some growth parameters. 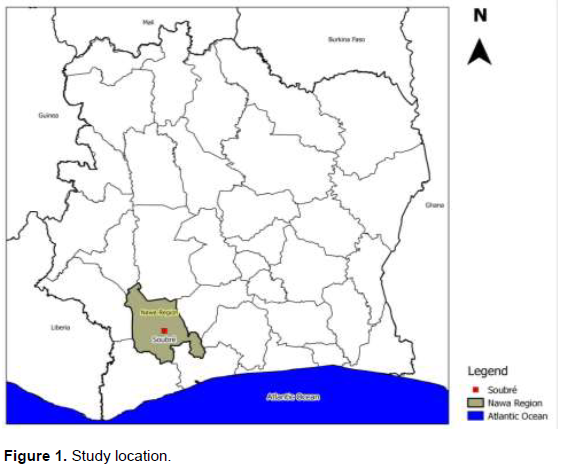 The cocoa clones were obtained from the Centre National de Recherche Agronomique (CNRA) Research Station in Divo. In the nursery, the rootstocks were raised by sowing seeds of an improved cocoa hybrid in polybags filled with topsoil. Three months after planting, the seedlings were grafted with the elite clones. The seedlings were grown for 5 months in a screen house before transplanting them to the field.

Ten elite cocoa clones coded as C1, C8, C9, C14, C15, C16, C17, C18, C20 and C21 were used as scions. Scions were collected from actively growing trees that had no visible signs of disease or pests. C1, C8 and C9 are introduced from the International Quarantine Center Reading, UK while the others are selected locally. All the clones are characterized by high productivity and tolerance to black pod disease.

The experiment in the nursery was a split plot design with two factors and three replications. Grafting method (budding or top grafting) was the main plot treatment and the 10 clones were the subplot treatment. The experimental unit consisted of ten grafted seedlings for each clone giving a total of 600 seedlings for the entire experiments. The grafted seedlings were watered every second day and sprayed with a foliar fertilizer (10 N + 8 P + 10 K + 0.29 MgO) fortnightly.

The experimental design in the field was also a split plot design with three replications, the grafting technique as the main plot treatment and the clones as the subplot treatment. The experimental unit consisted of 5 plants per clone giving a total of 300 plants. Plantain banana seedlings were planted at 2m x 2m to provide temporary shade six months prior to transplanting the cocoa seedlings at the same density as the banana. The seedlings were treated with an insecticide (Deltamethrin and Imidacloprid). A fertilizer (15.5 N + 26.5 CaO + 0.2 B) was also applied at the rate of 100 g/plant once a month. Weeding was carried out on a need basis.

The grafting  success  rate  was  calculated using the equation as follows:

The data were subjected to two ways analysis of variance (ANOVA), using Statistical Analysis System (SAS) software (SAS, 2003). The differences between means were assessed with the Student-Newman-Keuls (SNK) method at 5%.

Effect of grafting technique on selected growth parameters in the nursery

Shoot emergence: Grafting techniques significantly affected the number of shoots during 1 to 4 week after grafting (Table 1). The differences in shoot formation in relation to grafting technique might be due to the nutritive and nutritional factors like the quantity of carbohydrate stock in the seedling (Tchoundjeu et al., 2010). Budding showed no shoot in all clones compared to top grafting which recorded significant shoots during the first WAG. The lower shoot formation with the budding technique could be attributed to the low carbohydrate reserves (Akinnifesi et al., 2008; Tchoundjeu et  al.,  2010).  During the second WAG, top grafting recorded significantly higher shoots than budding in clones C9, C14 and C16. Top grafting exhibited high and significant number of shoots than budding in clones C16, C17, C18 and C21 three WAG. Top grafting produced more significant number of shoots than budding in clones C16 and C17 while there was no significant difference observed 5 WAG among the grafting techniques. This could be explained by the fact that seedlings that have been top grafted have the ability to renew or to regenerate more easily their cells and have more stored carbohydrates and hormones, because of fresh tissues (Tchoundjeu et al., 2010). Another possible explanation could be that there are a lot of meristematic tissues with high cell division activity at the point of grafting. Before shoot formation, the seedlings rely on the reserve of carbohydrates in their stem tissues. It is also established that the grafting success depends on proper alignment of parenchymatous tissues of both scions and rootstocks (Mohamed et al., 2014; Munjuga et al., 2013) and the skills of grafters (Mng'omba et al., 2010). 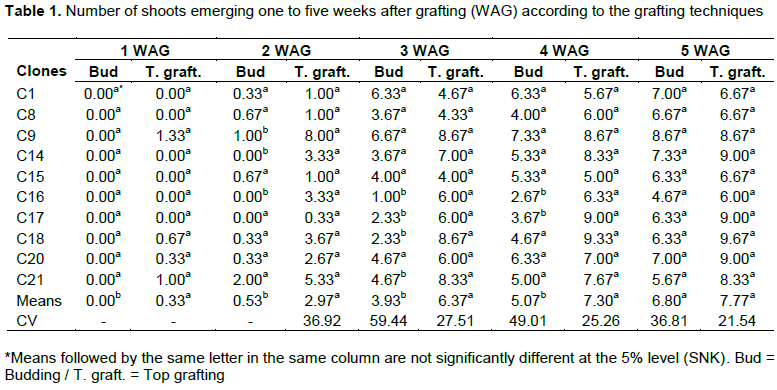 Grafting success: There were no significant differences between the two grafting techniques used. This could be probably due to the skills of the grafters or climatic conditions (Munjuga et al., 2013; Ofori et al., 2008). Top grafting recorded 77% grafting success compared to budding which showed a success of 68% (Figure 2). Our finding  concurs  with  work  reported  by Eskes and Efron (2006) on cocoa who observed that budding technique showed low grafting success rate in Cameroon, Nigeria, and Venezuela. The grafting success was relatively similar using both techniques for clones C1 and C9. With budding, the grafting success was relatively high with clones C9 and C20 and low with clone C16. When top grafting was used, all clones showed a high grafting success percentage compared to budding except for clones C20, C1 and C8. The overall grafting success in nursery in this study (73%) was similar to that in Malaysia (74%) as reported by Figueroa et al. (1991). However, it was low than that observed by Prawoto (2007) who reported high survival rate of grafted cocoa in Indonesia (80%). Consequently, according to these authors, the use of top grafting has been adopted in many countries in order to obtain high success rate. This method is suited to establish clone observation plots and may be applied in future by farmers to multiply preferred clones on their own farm. One disadvantage for using top grafting compared to  budding  technique  is  that  there  are  high chances of sprouting from the rootstock, but this is can be addressed by regular pruning. 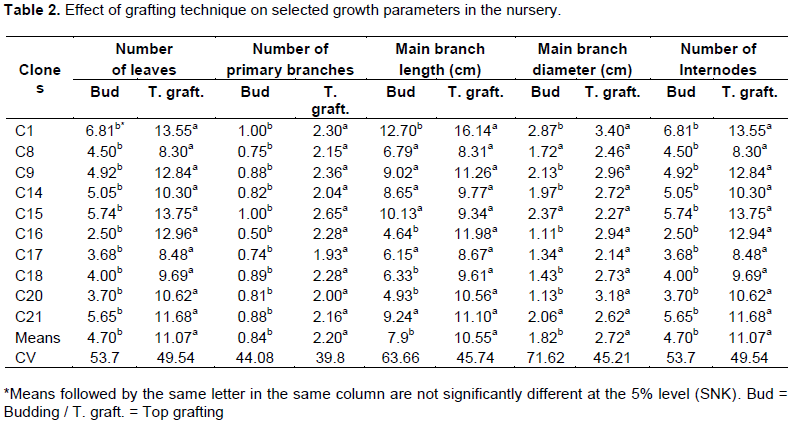 Effect of grafting technique on selected growth parameters in the field

The results of the present study showed that top-grafting yielded the best results in most cases. Top grafting exhibited the highest number of leaves than budding in cocoa clones C1, C16, C17 and C20 (Table 3). The number of secondary branches was higher in top grafting compared to budding in clones C1, C16 and C20. Top grafting  produced  more  elongation  of  the  shoots  than budding in clones C16 and C17. The number of leaves, secondary branches and primary branches contribute to the vegetative development of cocoa clones, and thus, contribute to higher yield (Salehi-Mohammadi et al., 2009). Unlike the other clones, the main branch was longer using budding technique compared to top grafting. Top grafting produced double the number of primary branches and more number of leaves and secondary branches than budding in the field. These results are similar to those of Sabir and Kara (2010) and Eskes and Efron (2006). During the current study, grafting techniques were found to have some effect on selected growth parameters of cocoa clones in field. These findings contradicts those of Effendy et al. (2013) who reported that side grafting is by far the most popular grafting method in cocoa in Indonesia. However they concur with Effendy et al. (2013) as some clones like C20, C1 and C8 exhibited high grafting success using budding compared to top grafting. These results are similar with those of Tesfaye et al. (2014) who found that in coffee, the grafting techniques influences vegetative growth parameters and can be used as a criterion to screen precocity materials. Most clones exhibited high grafting success when top grafting was used and it was proposed therefore in this study that this should be adopted for grafting the elite cocoa clones in the study areas. 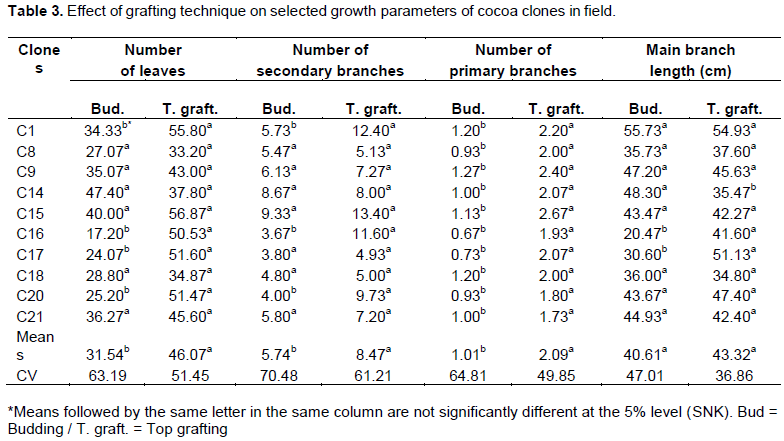 This work was funded by Mars Inc. The authors are grateful to CNRA for providing the plant materials and the ICRAF field staff in Soubré for the technical support.