The experiment was conducted in 2012, 2013 and 2014 agricultural crops, in the Federal University of Santa Maria, in Frederico Westphalen southern Brazil, the geographic coordinates of 27°23’26’’S, 53°25’43’’O, and altitude of 461 m. The soil is classified as ferric aluminicoxisol (Embrapa, 2006), and the climate, according to Köppen’s characterization, as Cfa subtropical. The experimental design was randomized blocks arranged in factorial scheme, being: three agricultural crops x two wheat genotypes dual purpose (BRS Tarumã and BRS Umbu) x five seeding rates (75, 150, 225, 300, 375 seeds m-2), arranged in three repetitions. The experimental units were composed by 12 lines with two meters length, spaced 0.17 m. System direct seeding was used in all agricultural crops, with NPK base fertilization of 250 kg haâ€‘1 (10â€‘20â€‘20), and 90 kg haâ€‘1 of nitrogen (N) in top-dressing at full tillering stage, in urea form (45% of N). The harvest was manually done, being considered the plants present in the six central lines of each experimental unit, disregarding 0.5 meters of each extremity aiming to minimize the border effects (Martin et al., 2010). Posteriorly, the seeds were accommodated in a chamber with constant temperature of 25°C during 15 days in order to homogenize the humidity, which is determined by the official oven method, at 105°C for 24 h, occurring the standardization at 13% of humidity (Brasil, 2009).
The physiological germination tests, first counting and dry mass were carried out with four sub-samples of 100 seeds for each experimental unit. The seeds were accommodated in rolls formed by three germination paper sheets of the germitest type, moistened with distilled water in a proportion of 2.5 times the mass of the dry paper. The rolls were wrapped in polyethylene envelopes aiming to keep the humidity, and were subsequently allocated in a B.O.D at 20°C (Brasil, 2009).
Germination (G) was evaluated eight days after sowing, and the data was measured by the percentage of normal seedlings (Brasil, 2009). Collectively, four days after sowing, it was evaluated the first germination counting (FGC), measured by the percentage of normal seedlings (Brasil, 2009). Determination of seedlings dry mass (SDM) occurred from ten normal seedlings at eight days after sowing. For this, the seedlings were dried in an oven with forced ventilation at temperature of 70°C until constant weight, and the results are expressed in grams (g). For field emergence (FE) evaluation, it was proceeded the sowing of four hundred seeds disposed in four repetitions, with one hundred seeds for each experimental unit. The number of emerged seedlings counting was performed on the twentieth-first day after sowing, and the results expressed as a percentage.
The data was submitted the normality test of Shapiro  and Wilk (1965), and homogeneity variance by Bartlett (Steel et al., 1996). It was found interaction for agricultural crops x two wheat genotypes dual purpose x seeding rates, at 5% of probability. The characters that revealed significance were deployed to simple effects for qualitative factors. The quantitative factor was subjected to linear regression analysis, identifying the most significant polynomial degree, and the results were expressed in graphs. The analyses were performed using statistic software Genes (Cruz, 2013).

Analysis of variance for traits
Analysis of variance revealed significant interaction at p>0.05 probability for agricultural crops x two wheat genotypes dual purpose x seeding rates for the characters first germination counting (FGC), germinated seeds percentage (GP), seedlings dry mass (SDM), and field emergence (FE). The coefficients of variation obtained for the measured characters ranged from 4.53 to 16.53%, indicating reliable inferences about the results and good experimental precision (Pimentel Gomes, 2000).
Seed qualitya
Germination is crucial for commercializing seeds, which must provide minimum percentage of 80% (Brasil, 2003). Among seeding rates for germinated seeds percentage (GP) (Figure 1), it is observed that the genotype BRS Tarumã in agricultural crops 2011 (G1Y1) and 2013 (G1Y3), as well as the genotype BRS Umbu, in the agricultural crops of 2013 (G2Y3), reduced germination with the increase of seeding rates. However, the genotype BRS Umbu, in 2011 (G2Y1) revealed germination increase with the elevation of seeding rates. The genotype BRS Tarumã in 2012 (G1Y2), revealed germination increment when cultivated in the density of 225 seeds per square  meter.  It  is  observed  differential behavior of genotypes at different sowing densities. The quality of the wheat seeds produced is closely related to plant density, where random plants reductions adversely affect seeds physiological quality (Barbieri et al., 2013). 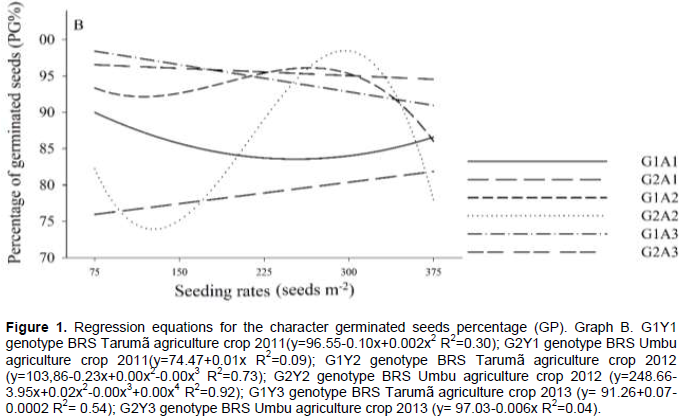 It was verified superior germination performance for the genotype BRS Tarumã in 2011 and 2012 agricultural crops. However, in 2013, the genotypes behaved similarly, where the genotype BRS Umbu revealed superiority at density of 375 seeds per square meter. Between agricultural crops, the genotype BRS Tarumã revealed superiority in 2012 and 2013, while the genotype BRS Umbu presented higher percentages in 2013 (Table 2). Germination is evaluated under ideal conditions; however, it cannot be regarded as absolute because their results should be related to complementary vigor testing in order to better represent the seedlings performance in the field (Douradinho et al., 2015). The first germination counting consists of a vigor indicative test, the ability of quickly germinate relates to the vigor and can be an indicative of higher physiological quality (Marcos Filho, 2015).
Among seeding rates, it is observed for the character first germination counting (FGC), that the genotype BRS Tarumã in 2012 (G1Y2) and 2013 (G1Y3) agricultural crops (Figure 2), and BRS Umbu in 2013 (G2Y3) revealed an increase for first germination counting at density of 300 seeds per square meter, while the genotype BRS Tarumã in 2011 (G1Y1) demonstrated reduction of values in response to seeding rates increment. The genotype BRS Umbu in 2012 (G2Y1) incremented the character FGC. The results evidence that the vigor attributed to wheat dual purpose seeds are linked with intrinsic characteristics of the genotype, and also with seeding rates and agricultural crops. Marcos Filho (2015), the evaluation of vigor has many implications in the seed sector as a basic monitoring of physiological potential during different stages of seed production, being an apparatus for strategic decisions regarding the selection of seeds with high physiological potential, aiming to meet the consumer’s demand. 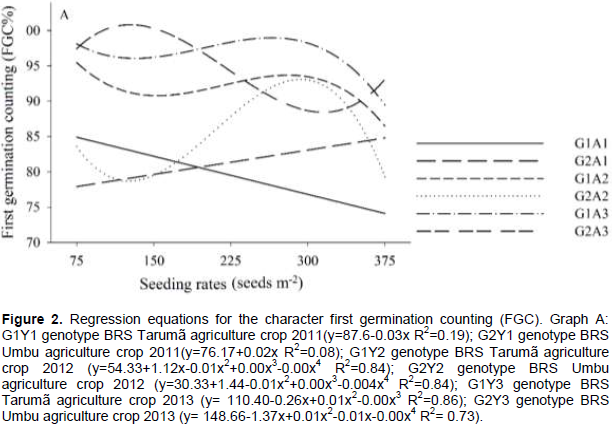 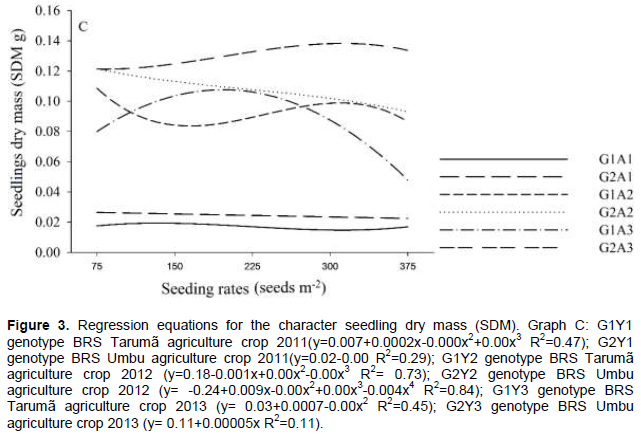 The character seedlings dry mass is also considered a vigor attribute because it constitutes a form of evaluation that relates more to seeds physiological performance, and plants in the field, depending on edaphoclimatic growing conditions, proper genotype positioning in micro regions, fertilization, harvest close to physiological maturity, and appropriate management techniques (Peske et al., 2012). The allocation of dry matter in seeds has close relationship with the area of leaves available for photosynthetic process, which may be benefited by the crop population density. Plants with proper spacing tend to make better use of mineral resources, water and light, producing more assimilated (Lopes and Lima, 2015). In appropriate environmental and management conditions, the assimilates partitioning is sequential throughout the development, being the seeds favored in bigger or smaller intensity, depending on the level of competition between structures (Pedó et al., 2016).
Among seeding rates for the character field emergence (FE), the genotype BRS Tarumã in 2012 and 2013 (G1Y1 and G1Y3) agricultural crops, and the genotype BRS Umbu in 2013 (G2Y3), revealed reduction of vigor with seeding rates increment (Figure 4). On the other hand, the genotype BRS Umbu in 2012 (G2Y2) revealed seedlings emergence increment with density increases. The genotype BRS Tarumã in 2011 (G1Y1), and the genotype BRS Umbu in 2012 (G2Y2) presented higher magnitudes for seedlings emergence at density of 225 seeds per square meter. The character field emergence, in 2011 agricultural crops evidenced no difference between genotypes, in 2012 superiority was revealed for the genotype BRS Tarumã. In 2013, the genotypes behaved similarly, and BRS Umbu was superior only at density of 300 seeds per square meter (Table 4). 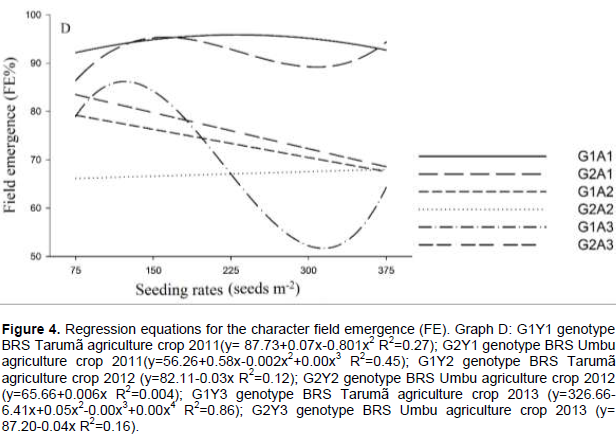 Guedes et al. (2015), the character field emergence enables to evaluate the real physiological potential of seeds, because, when sown in non-controlled environmental conditions, seeds are subjected to a range of adverse factors, which could compromise the plants stand. Moreover, it should be noted that field emergence relates to the ability of metabolizing reserves, membrane reorganization and carbon allocation in seedlings. The main factors that determine seed vigor are determined in the field of production during the mother plant or seed development (Bewley et al., 2013). Therefore, plants grown in more appropriate densities and management tend to produce seeds with greater vigor and lower mass allocation.