This study assessed the supplemental value of Roxazyme® G2 in the utilization of cassava fibre meal (CFM) by broiler-chickens in a 56 day feeding trial. A batch of three hundred and sixty day-old Arbor acre broiler-chicks was allotted to twelve treatments replicated five times of six birds in a 4 × 3 factorial in complete randomization. Cassava fibre meal was substituted for maize at 0, 20, 40 and 60% levels and Roxazyme® G2 supplementation was at 0, 100 and 200 mgkg-1. Results showed that CFM substitution at 40 and 60% levels for maize led to significant decrease (p<0.05) in weight gain of broiler chickens at both starter and finisher stages while feed conversion ratio was significant (p<0.05) at 60% CFM substitution at the starter phase. The effect of enzyme supplementation was not significant in the physiological growth of the birds at both starter and finisher stages. Eviscerated weight, liver and kidney weights were significantly (p<0.05) affected by CFM substitution. The effect of interaction was not significant (p>0.05) indicating that performance, carcass and organ description of broiler chickens were not dependent of the two factors under investigation. At starter phase, CFM substitution led to the saving of $0.07-0.08 per cost of feed $/kg weight gain and $0.08-0.13 per cost of feed $/kg weight gain on broiler finisher production. Roxazyme® G2 supplementation only at 100 mgkg-1 led to the saving of $0.03 and 0.01 per cost of feed $/kg weight gain at the starter and finisher stages respectively.

The increased cost of maize occasioned by the stiff competition for its use by man, animal and industry has been the bane to its economic incorporation as a major energy source in poultry diets, especially broiler chicken diets. This has hitherto led to increase in the cost of finished  feeds   with   resultant   increase  in  the  cost  of intensive poultry production with consequent increase in the cost of animal protein supply viÅ›-á-viÅ› low animal protein intake, particularly among the resource poor citizens in developing countries (Agbede, 2019). To this end, Animal Scientists, Nutritionists, Food Processors and  other   related  professionals  are  pre-occupied  with  sourcing for alternative energy feed sources that could economically replace maize without compromising weight gain and health status of animal. However, many alternative plant feed resources are constrained by low crude protein, high fibre and active anti-nutritional factors (Agbede, 2019). In particular, high fibre has been reported to limit the use of alternative plant resources in animal feeds (Oloruntola et al., 2016a). However, the use of fibre degrading technology such as fermentation (Aro et al., 2012, Oloruntola et al., 2016a; Adeyeye et al., 2019) and exogenous enzyme supplementation (Fasiullah et al., 2010; Oladunjoye and Ojebiyi, 2010; Ogunsipe et al., 2015; Ogunsipe, 2017; Oloruntola et al., 2018b) has been reported to enhance the utilization of fibre rich diets.

The use of fibre degrading enzyme has been reported to enhance the utilization of fibre rich diet (Oloruntola et al., 2016a) by improving weight gains, feed efficiency and health status in livestock (Fasiullah et al., 2010; Oladunjoye and Ojebiyi, 2010; Ogunsipe, 2017; Oloruntola et al., 2018b). Roxazyme® G2, is a brown granulated powder, free of smells and soluble in water, having density 0.86 g/ml, a complex enzyme derived from Trichoderma longibrachiatum composed of β-glucanase, cellulose and xylanase and having a fibre degrading property. The supplementation of cassava fibre meal with Roxazyme® G2 in broiler chicken diet is hoped to improve broiler chicken production with minimal cost without compromising weight gain and health status of the birds.

The right to conduct this study was given by the Research Committee of the Animal Production Unit of the Department of Agricultural Science, Adeyemi College of Education, Ondo State, Nigeria.

Location of the experiment

Processing of cassava fibre meal and procurement of Roxazyme® G2

The cassava fibre used for this study was collected from Cassava Processing Factory, km 7, Ondo-Ore Road, Ondo, Nigeria. Thereafter, the wastes were sun-dried for 5 to 7 days depending on the intensity of the sun, and were constantly turned to prevent fermentation. The sun-dried cassava fibre were milled, bagged and kept in store prior to use. The milled cassava fibre meal (CFM) was analyzed for its proximate composition, mineral and phytochemical components. Roxazyme® G2 is a product of DMS Nutritional Product Europe Ltd. The basic activity of Roxazyme® comes from cellulases, endo- 1,4-beta-glucanase (glutamate) and xylanases.

The CFM and experimental diets were analysed for their proximate compositions as described by AOAC (2002) methods. Also, the maize, soybean meal, groundnut cake and fish meal used for the diet’s formulation were analyzed for the crude protein before used. This is to prevent large variation in dietary protein after mixing. The mineral constituents were analyzed by first dry ashing the samples at 550°C using AOAC (2002) method. Phytate was quantified as described by Young and Greaves (1940) while tannin was according to Makkar and Goodchild (1996). Flavonoids and alkaloids were determined according to the methods of Bohani and Kocipai-Abyazan (1994) and Harborne (1973), respectively. Cyanide determination was by the method of Rao et al. (1997) while oxalate was by the method of Baker and Silverton (1985) (Table 1). 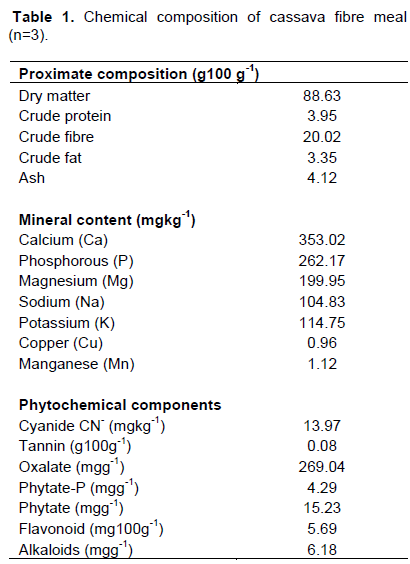 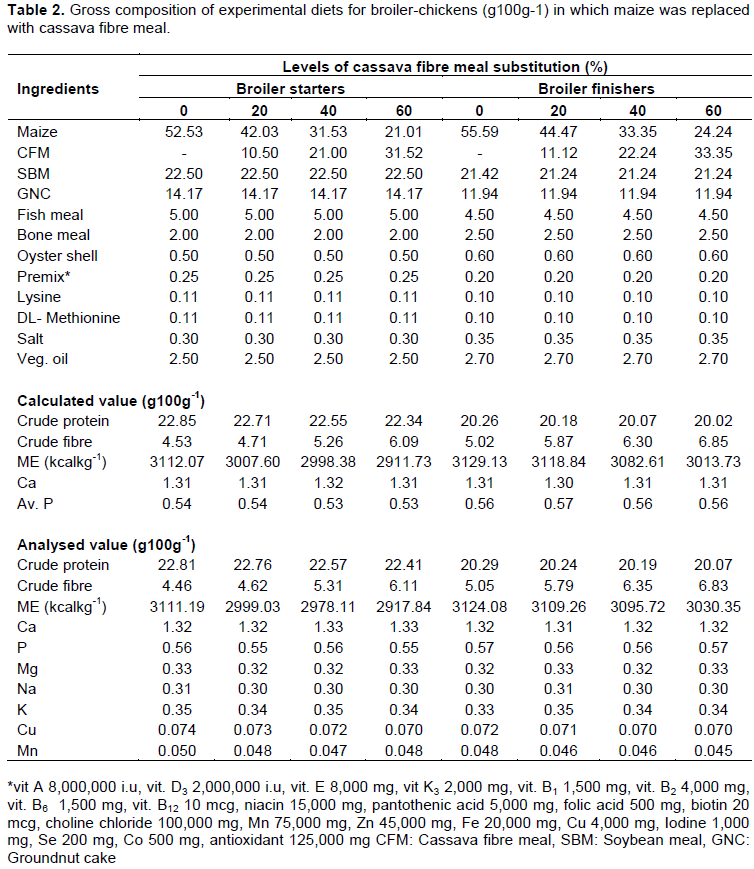 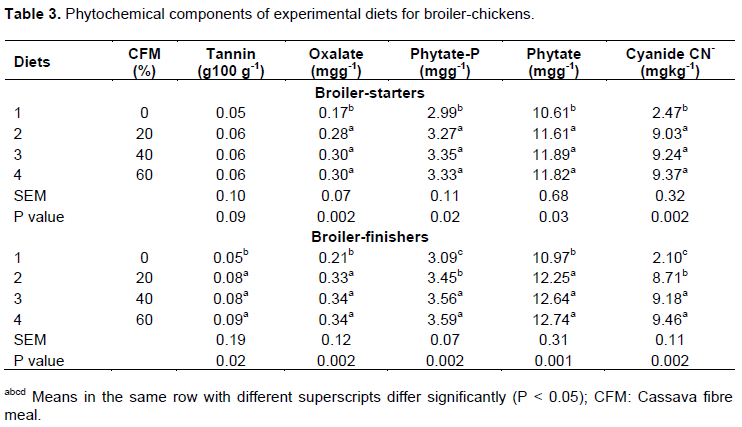 Data were collected on daily feed intake and weekly weight gain while feed conversion ratio (FCR) was the calculated as the ratio of feed intake to weight gain.

At the end of eight (8th) week experimental period, three birds from each replicate were randomly selected, starved overnight, weighed, stunned and sacrificed by severing the jugular vein with sharp surgical knife and bled. The dressed birds were eviscerated for carcass evaluation and organ weight determination. The organs measured were heart, lung, liver, spleen, kidney and gizzard while intestinal length was measured using a tape rule. All organs measured were expressed in gkg-1 body weight, except the intestinal length that was expressed in mm. The dressed carcass and eviscerated weights were expressed in % body weight.

The cost evaluation of broiler-chickens fed with or without enzyme supplemented cassava fibre meal-based diets were determined using the under listed economic tools. The production cost of the processed cassava fibre meals were determined with respect to the sum of expenditures incurred in the processing method employed. The cost of feed was calculated based on the prevailing market price of the feed ingredients at the time of study.

Data collected were subjected to one way analysis of variance using General Linear Model of the Statistical Package for Social Sciences (SPSS) (2006). Data were tested for the main effects (cassava fibre substitution level for maize: 0, 20, 40 and 60%) and enzyme  supplementation  level:  0, 100  and  200 mg/kg) and a two way interaction. Duncan option of the same statistical software was used for mean separation where identified. 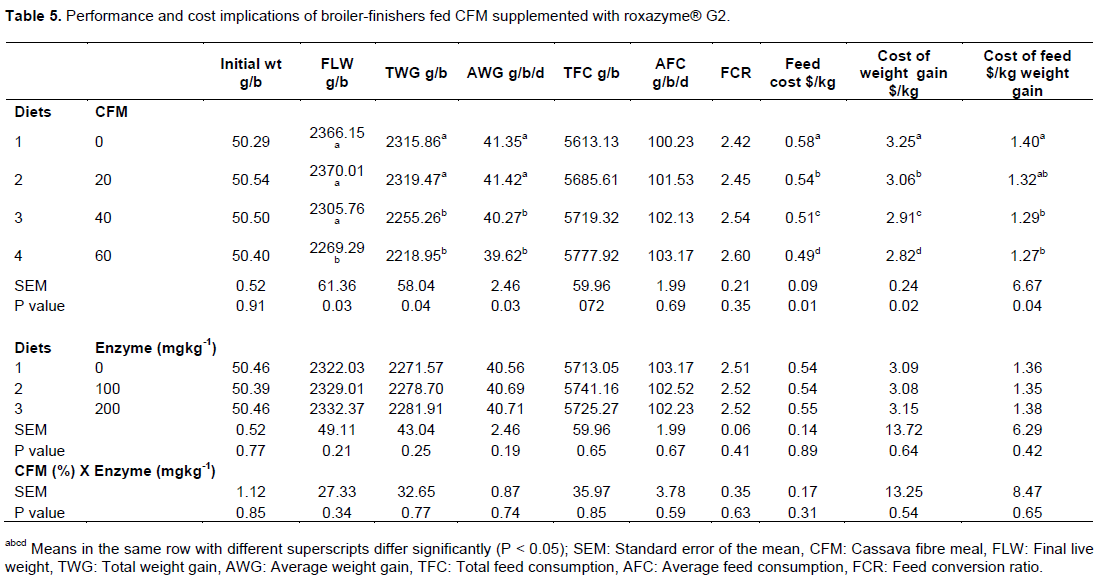 Table 6 shows that broiler chickens had lower eviscerated weight but higher heart, liver and kidney weights when fed diets containing 60% CFM against those fed in the control and up to 40% CFM in place of maize. The effect of enzyme supplementation did not influence the carcass and organ weights of the birds. Also, the dependency of one factor over the other was not significant.

One pertinent question this study tries to address was whether a high fibrous cassava fibre meal with or without enzyme supplementation could economically replace maize as energy source in broiler diets without compromising  weight  gain  or  health status of the birds.

This is because the price of maize has significantly increased recently owing to the stiff competition for its use by man and animal. This study showed that the crude protein and crude fibre of CFM used in this study were lower than the values earlier reported (Aro et al., 2012; Oboh, 2006). It also showed that CFM contained some nutritionally needed mineral elements that can be harnessed for feed formulation. In addition the cyanide content (13.97 mg/kg) was lower than the range of 19.00-44.60 mg/kg reported by Oboh and Akindahunsi (2003), Oboh (2006) and Ngiki  et  al. (2014). The observed difference could be due to the processing method adopted. Gradual sun-drying process, which was the processing method adopted in this current study had been reported to reduce cyanide concentration in cassava waste (Aro et al., 2010) while in most cases the phytochemical components typified by phytate, tannin, oxalate, flavoniod and alkaloids were similar to the values reported by Oboh (2006) and Aro et al. (2010) for microbially fermented cassava wastes.

The  lower  weight  gain  recorded  for  birds  on CFM-based diets could be attributed to the effect of high fibre (Madubuike and Obadimma, 2009) and possible toxigenic effect of residual cyanide (Aro et al., 2013), which increased with increased maize substitution in diets. Diets high in non-starch polysaccharides had been reported to compromise weight gain by poultry (Rahman et al., 2005). In this present study, feeding CFM at 40 and 60% substitution levels for maize as source of energy resulted in significant decrease in weight gain. The poor feed conversion ratio of broiler  starters   on  higher   substitution  of   CFM could be due to the fibrousness of the diet which could have limited the utilization of the diet. High fibrous diet has been reported to bring about physical bulk which limited feed intake by broiler chickens (Uchegbu et al., 2011) or reduce nutrient absorption as a result of decreased villus height particularly in young birds (Jankwowski et al., 2011).

The similar feed consumption, weight gain and feed conversion ratio of birds fed enzyme supplemented diets in spite of the low metabolizable energy of CFM-based diets could be due to the nutritional adequacy of the text diets as alternative energy source to maize or possibly the role of Roxazyme® G2 to make up for the deficit in energy content as earlier reported by Gao et al. (2008) or the role of exo-enzyme in improving the nutritive value of high fibre diets (Anglelovicova et al., 2005; Raza et al., 2009; Ogunsipe et al., 2015; Oloruntola et al., 2016b). This thus suggests that the villus which is important in nutrient absorption was neither compromised by cassava fibre meal inclusion or exo-enzyme supplementation in broiler chicken diets.

Similar dressed weight of birds fed maize and CFM-based diets in this study could be ascribed to the similar nutrient utilization by the birds as shown in the feed conversion ratio and this is in consonance to the earlier report by Agbede and Aletor (2003) when gliricidia leaf protein concentrate (GLPC)-based diets were fed to broiler-chickens. In this study, the carcass cuts as well as the relative organs weight except eviscerated weight, heart, liver and kidney were not significantly affected by the dietary treatments suggesting that the  development  of  the  carcass cuts and relative organ weights of the experimental birds were identically supported by the test diets. The similar heart, liver and kidney weights up to 40% substitution of maize with cassava fibre meal in this study suggest that the levels of hydrogen cyanide (HCN) and other phytochemical components present in the diet did not trigger the increased activity of these organs.