Based on the concept of sustainability, which covers the energy issue as well as its rational use from natural resources, conventional sources do not meet the real requirements of the current production methods. In that context the west region of Paraná state in Brazil presents a vocation for developing projects that involve energy production from alternate sources such as biomass, water, wind energy and solar. Thus, the aim of this research was to verify the behavior of solar and wind sources in the city of Cascavel, Paraná, under different time series of a weather station, subjecting them to quantitative and qualitative analyses of their available energy, by using a statistical approach with Spearman’s correlation coefficients (CC). Solar radiation and wind speed were observed. The correlation coefficients used in the analyses of behavior among alternative sources showed weak correlation with independence between variables in all parameters. Solar energy availability was proportionally more representative than wind availability in all periods assessed, mainly between inter seasonal averages.

The region within 30° North and 30° South from the Equator (Asia, Africa and Latin America) has plenty of one or more renewable and clean energy sources, as solar, wind, water, biomass, geothermal and tidal. The issue is how to proceed in combining these resources with human needs (Ramakumar and Bigger, 1993).
Brazil has a significant share of renewable sources in its energy matrix, reaching 74.60% in 2014, which is above the global average of 19.70%  in  2010,  according to the International Energy Agency (IEA). The Brazilian economy is two times less polluting than the American, 1.3 times less than the European and 4 times less than the Chinese (MME-Ministry of Mines and Energy (Brazil) and EPE- Empresa de Pesquisa Energética, 2015). Hydropower is the main production source in the Brazilian energy matrix with 76.90%. Hydroelectric power plants are great energy providers, but in general terms they are limiting for  a  number  of  conditions  concerning environmental, logistical and financial issues, having to depend on other forms of renewable energy to meet the world’s needs with the same efficiency and sustainability (MME-Ministry of Mines and Energy (Brazil) and EPE-Empresa de Pesquisa Energética, 2015). The Brazilian aptitude for renewable energy options is potentially favorable, mainly with water, solar, wind and biomass.
Studies by (Tiba et al., 2000) in a time span of 40 years showed that the average daily global solar radiation in Brazil ranges from 8 to 22 MJ/m².day−1. In 10 years of studies (Pereira et al., 2006), found that the southern region of Brazil has an inter annual average between 17 and 22 MJ/m².day−1. In Paraná the annual average of daily global solar radiation is 16 MJ/m².day−1 (Tiba et al., 2000). In 2014 the installed capacity for wind generation in the country increased by 122.0%. The northeast region presents the country’s largest wind energy production with installed capacity of electrical generation of 3.9 MW . The advancement of Brazilian wind generation is noticeable; the difference between 2013 and 2014 represented an increase of 85.60% (MME-Ministry of Mines and Energy (Brazil) and EPE-Empresa de Pesquisa Energética, 2015).
Alternative sources of energy can be supplied together. The solar and wind energy sources can be regarded as complementary in time, space or both (Beluco et al., 2008). Li et al. (2009) examined the correlation of wind and solar power in Australia for a whole year. Studies of (De Jong et al., 2013) were based on statistical data variables that defined the solar and wind resource and its correlation with the load curve between levels of hydroelectric reservoirs. According to (Notton et al., 2011), it is possible to analyze weather data in order to check the available energy from wind and solar sources using a correlation coefficient (CC) for a given period. Correlation analysis is the definition of a numerical direct  relationship between two variables and Spearman’s correlation coefficient can be used for data that do not have a standard, as well as for nonparametric data using only ranks, also called Spearman’s rank coefficients; this method makes no assumption about the frequency distribution of variables (Shimakura, 2005).
In this context, the aim of this study was to analyze the behavior of alternative sources from solar irradiance and wind speed and direction, turning the hourly data inherent to these variables into different time series in order to describe in more detail the energy availability provided by solar and wind sources in Cascavel, PR.

Availability of solar and wind energies
Solar energy
Several  devices  are  used  for  measuring  solar  radiation  and  its components; the Campbell-Stokes heliograph measures the number of hours of sunshine or heat; the actinographer measures the total or diffuse solar radiation; the pyrheliometer measures the flow of direct solar radiation, and the pyranometer measures global radiation (Tiba et al., 2000). These measuring devices, according to (Martinazzo, 2004), meet the technical recommendations of the World Meteorological Organization (WMO) in what concerns to their installation and calibration, what makes them reliable and accurate, since each device requires specific care according to their purpose and limitations. The Angstrom relationship is the one existent between the daily global insolation and radiation. This method was established in 1924 and was modified by Prescott in 1940, and is currently known as the Angström-Prescott equation, defined by Equation 1, in accordance with (Suehrcke et al., 2013), in which the rate of daily global solar radiation ð» [ð‘€ð½.ð‘š-2] by the daily global radiation at the top of the atmosphere ð»0 [ð‘€ð½.ð‘š-2] is equivalent to the sum of the linear regression coefficients ð‘Ž + ð‘ [ð‘‘ð‘–ð‘šð‘’ð‘›ð‘ ð‘–ð‘œð‘›ð‘™ð‘’ð‘ ð‘ ], being multiplied by the ratio between daily insolation ð‘› [â„Žð‘œð‘¢ð‘Ÿð‘ ] and daytime duration ð‘› [â„Žð‘œð‘¢ð‘Ÿð‘ ]. The pyranometer was used to measure global solar radiation in a horizontal surface.

Wind energy
According to (Masseran, 2015; Pinto, 2013), when the flow of air in motion is variable through time, it turns into potential wind energy ð‘ƒ [ð‘Š.ð‘š-2] (Equation 2). It is used in order to better describe the flow of wind power available, which in this situation is directly proportional to wind speed cubed ð‘£ [ð‘š.ð‘ -1], the area of the airstream that has been measured at a perpendicular plane to wind speed direction ð´ [ð‘š²] and air density [ð‘˜ð‘”.ð‘š-2].

Characterization of the area and obtainment of meteorological data
The obtainment of solar and wind energy data was provided by a meteorological station model Hobo U30, located at 18 meters high, at coordinates - 24° 59' 19" (S) and - 53° 26' 52" (W), 763 m above sea level, as shown in Figure 1. Data acquisition was performed automatically for a period of two years by means of a Datalogger. 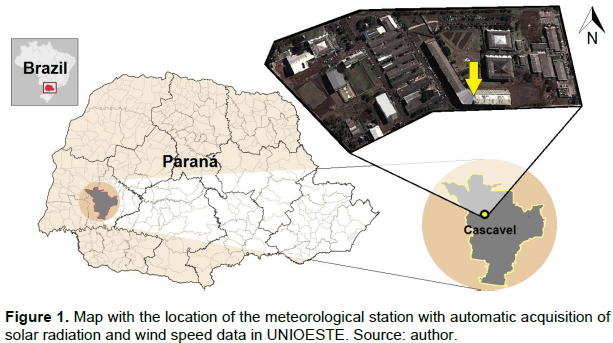 Time series
The several types of weather variations are highly relevant for the use of solar and wind energy, considering daily, annual, seasonal and short-term variations, the latter in the case of wind speed (Macêdo  and  Pinho,  2002).  After automatic data collection by the weather station, the five-minute intervals were changed to hourly intervals. The variables of barometric pressure, ambient temperature, solar irradiance, wind speed and direction were processed into a spreadsheet. Mean and/or cumulative values â€‹were discussed in order to analyze the solar and wind energy availabilities occurring in these different variations of time, for a daily, monthly, yearly and hourly stationary discussion. Discussions related to the behavior of the time series, wind and solar availability and analysis of correlation coefficients are put separately to assess the variations observed in each series.
Energy availability data analysis
Posterior to obtaining the solar irradiation meteorological data, the available solar energy (ASE) [ð‘Šâ„Ž] was calculated with the nth average of the data group ð‘› [ð‘¢ð‘›ð‘–t] by multiplying the described average global radiation  described by Equation 4. The 5 min intervals were changed to hourly intervals by multiplying them by the coefficient demonstrated in Equation 5.

For the available wind energy (AWE) [ð‘Šâ„Ž], the nth average of the data group ð‘› [ð‘¢ð‘›ð‘–t] was calculated by multiplying the average wind power described in Equation 6. The 5 min intervals were changed to hourly intervals by means of multiplying them by the coefficient demonstrated in Equation 7. The same was done to solar energy.

Interannual energy availabilities
The peak hours for solar and wind energy availability were  concentrated  at  10  and  12 o’clock,  as  shown  in Figure 2. The daily temperature cycle, according to (Tubelis and Nascimento, 1986), reflects the solar irradiation variation throughout the day. The daily variations of radiation balance occur due to the sun daily path above the horizon, and during this moment of the day, the uneven warming of soil surface induces the ascending hot air to replace colder air masses, occasioning a thermal and gradient difference of pressure and generating a bigger flow of air masses. The hourly averages of energy availabilities always had solar energy with the highest potential during the year typical. The solar energy was 7.39 times superior to wind energy. The highest hourly averages of solar energy availabilities obtained were 54.67 Wh.m-2 (Solar) and 3.88 Wh.m-2 (wind).

Interseasonal energy availabilities
The main characteristic related to the natural resources observed concern their diluted energetic nature, verified on seasonal periods (Nogueira, 2004). This peculiarity was noticed on the solar and wind energy availability verified between the seasons of the period observed, showing a higher solar potential during summer. A higher wind potential was verified during fall, showing a typically stochastic wind peculiarity, as seen in Figure 4. During winter the solar energy was 10.38 times superior to wind energy; in spring, 23.60 times superior; in summer, 11.92 times superior and in fall 5.53 times superior. 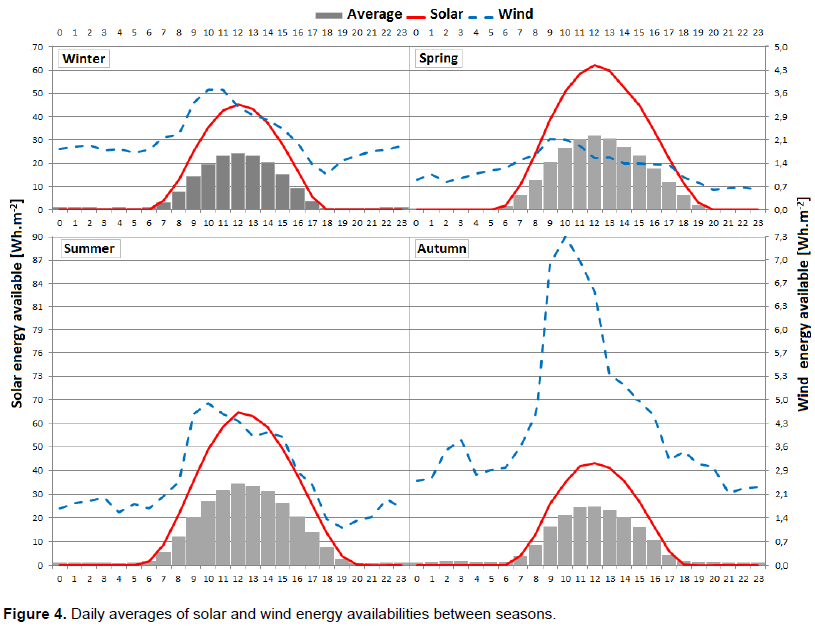 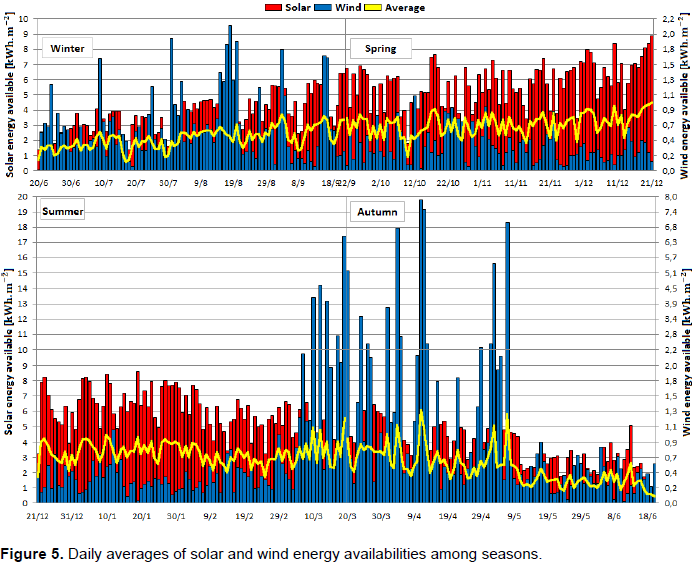 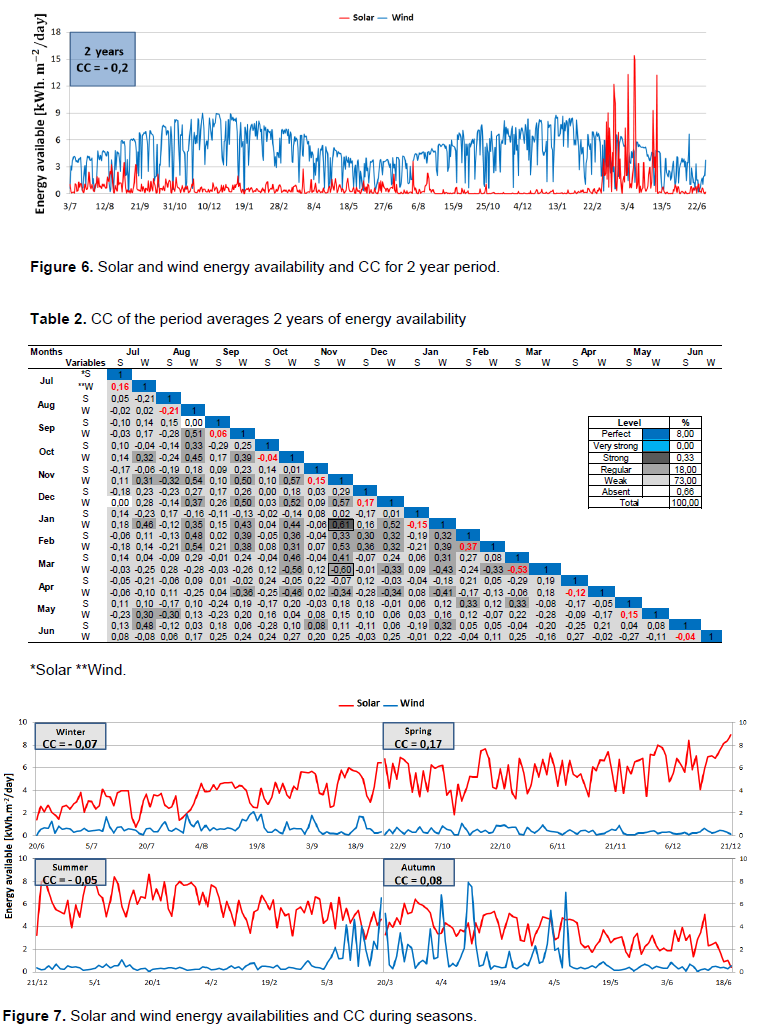 Wind availability is relatively low, does not present satisfactory energy complementarity, safeguarded the magnitudes among the alternative sources studied, such as the height observed of anemometer. Solar energy availability was proportionally more representative than wind availability in all periods assessed, mainly between interseasonal averages. The highest accumulated energy between seasons was observed in summer. The correlation coefficients used in the analyses of behavior among alternative sources showed weak correlation with independence between variables in all parameters.