The crop yield of sugarcane is governed by several factors intrinsic to the cultivar, climate, soil and management practices of the culture. However, all these factors interact with each other and it is up to professionals working with this culture to integrate the effects of these factors to achieve greater economic productivity (Gama 2007).
Fertilizers and pesticides have been frequent targets of criticism because of their elevated costs involved in production of sugarcane, or in other cultures. The high prices caused by the fact that raw materials for the production of fertilizers and pesticides are imported.
About 60% of nitrogen, 50% of phosphorus and 90% of potassium used in manufacturing of fertilizers in Brazil are imported from other countries (Vieira 2009).
Proper nutrition of sugarcane is demonstrably recognized as the main cause of increments of crop yield. While mineral fertilization is widely used to supply nutrients and represent a large part of production costs, seeking alternatives benefitting sugarcane and ethanol producers by reducing their costs represents a major contribution of research institutions.
With the growth of poultry production in our country supply of animal wastes such as poultry litter has been increased. Thus, their application of organic wastes is being considered as a promising and cost-effective method to confront this challenge. These wastes have been demonstrated to provide plant nutrients and organic matter to the soil required for crop production (Roy et al., 2015). Besides that   their use in agriculture as an alternative source of nutrients is important both to properly dispose of these products in order to avoid environmental pollution and to reduce high costs of synthetic fertilizers (Portugal  et al., 2009).
Poultry litter is a mixture of substrate, feces, feathers and feed scraps used in bedding of broiler sheds (Chen et al., 2013). Chicken litter is usually recycled as an organic fertilizer or soil amendment for direct application to agricultural land (Enticknap et al., 2006). This residue can be used to improve physical and chemical properties of soil and the productivity of some cultures (Silva et al., 2009).
Besides animal waste, various materials are obtained from the production of sugar and ethanol as boiler ash and filter-cake. Knowledge of their composition and possible uses in crops allows their application in the form of organo-mineral fertilizers, which can provide a greater environmental control, considerable savings in fertilizer costs (Santiago and Rosseto, 2009) and significant results in productivity of sugarcane.
An alternative for the use of poultry litter and by-products of sugar and ethanol production is composting of these residues together with mineral fertilizers to improve their chemical and physical properties (Chen and Jiang, 2014). Thus, the use of waste, both of animal and industrial origin, as nutrient sources in sugarcane production is of paramount importance, because, in addition to contributing to environmental sustainability  by no longer having a status of polluters, they become an alternative in soil fertilization, decreasing the use of mineral fertilizers.
Therefore, our objective was to evaluate productivity, content of macronutrients in sugarcane leaves and chemical characteristics of soil as a result of application of poultry litter and organo-mineral fertilizer in relation to mineral fertilizer in soil.

The experiment was conducted at the Jalles Machado Mill, in Goianésia- GO, from July 2009 to April 2010, using the IAC91-1099 sugarcane variety. The soil is classified as dystrophic red-yellow latosol, clay texture (589 g kg-1 of clay) with the following chemical properties (Table 1).

The experiment was conducted as a randomized complete blocks design with 2 x 3 +1 + 1 strata (poultry litter and organo-mineral fertilizer x three doses + an additional treatment (mineral fertilizer) + a control treatment), eight treatments and four replications, totaling 32 plots. experimental plots had 5 rows of sugarcane spaced 1.5 m apart, with 10 m in length, with a total area of 75 m2. The treatments were: poultry litter and organo-mineral fertilizer, whose chemical properties are shown in Table 2, at doses of 3.0, 6.0 and 9.0 t ha-1; mineral fertilization (additional treatment) at doses of 66 kg ha-1 of N (ammonium nitrate), 120 kg ha-1 of P2O5 (monoammonium phosphate) and 82 kg ha-1 of K2O (potassium chloride); as well as a control without fertilization. 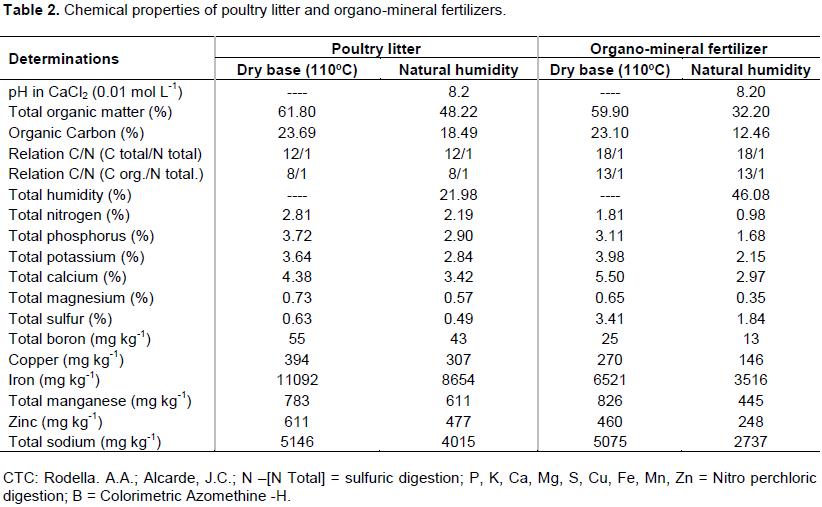 The organo-mineral fertilizer had been prepared for a period of 41 days and received the following proportions of materials: 55% of filter cake, 17.8% of boiler ash, 17.8% of poultry litter and 7.1% of agricultural gypsum. At the time of application on the field 1.1% of ammonium nitrate and 1.2% of potassium chloride were added to this fertilizer.
Planting was carried out in July 2009, after five years of cane cultivation, from 2003 to 2008 and application of 1 t ha-1 of lime and 10 t ha-1 of filter cake, made in 2005. After sugarcane harvesting, soil received application of lime, gypsum and itafós phosphate, and then soybean was planted. After soybean harvesting, in 2009, cane was planted.
Leaf samples were collected 150 days after treatment application using a methodology described by Korndörfer and Ramos (2008) to analyze macronutrients (N, P, K, Ca Mg and S). Sugarcane was harvested 210 days after treatment application, weighed to obtain stalk yield and soil samples were collected between rows 0-20 and 20-40 cm depth. Analyses of plant macronutrients, soil chemical properties (pH, Ca, Mg, K and P) and organic matter of soil were carried out in the Soil Analysis Laboratory (LABAS) of the Institute of Agricultural Sciences, Federal University of Uberlândia, following the methodology described by Embrapa (2009).
The data were analyzed and means were compared by Dunnet test (Assis 2011). The means were compared using Tukey test  and a statistical program Assistat at 5% significance level (Assis 2011). 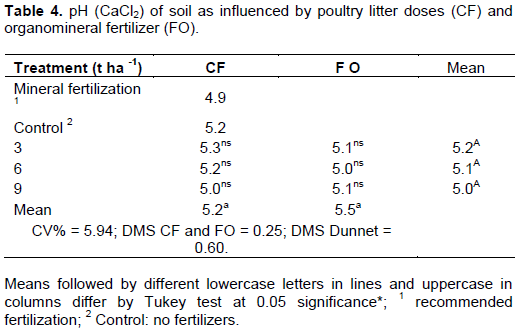 Almeida Júnior (2010), comparing the effects of organic and mineral fertilization on soil and plant characteristics of sugarcane culture, found that mineral fertilization significantly reduced soil pH. According to the author, this was probably due to the use of ammonium sulfate in mineral fertilizer, which can acidify soil by the formation of two protons (H+) for each nitrified NH4+ ion.
There was an increase significant (p < 0.05) in the availability of P in soil caused by the use of poultry litter and organo-mineral fertilizer (Table 5). As for K, there was no significant difference (p > 0.05) between treatments in the supply of this nutrient to soil (Table 5). According to CFSEMG (1999), the K contents in soil are considered low.

The increased availability of P in soil can be explained by the increase of the amount of directly available P due to the presence of this nutrient in the waste and its indirect action, which has the ability to improve soil properties (Oliveira, 2000).
Novais  et  al.  (2007)  reported  that   organic   material added to soil through the application of waste such as poultry litter, brings about, in general, decreased adsorption and increased availability of phosphorus for plants. Santos et al. (2009) reported that the availability of phosphorus in soil caused by the use of organic residues possibly occured due to the action of organic and humic acids and alcohols, which provide substances such as phenols and contribute to increased availability of this nutrient
There was no significant difference (p > 0.05) between the treatments with mineral fertilizer, poultry litter doses and organo-mineral fertilizer regarding Ca and Mg levels in soil (Table 6). Nevertheless, the average levels of available Ca, where poultry litter and organo-mineral fertilizer were applied, were higher than mineral fertilizer, possibly due to the lack of Ca source. The average supply of Ca to soil was 1.5 cmolc dm-3 with poultry litter and 1.4 cmolc dm-3 with organo-mineral fertilizer. According to CFSEMG (1999), the levels of Ca in all treatments, are considered medium, i.e. are between the range of 1.21 and 2.4 cmolc dm-3.

There was no significant difference (p > 0.05) between control treatment and where mineral fertilizer, poultry litter and organo-mineral fertilizer were used regarding Al content and soil organic matter (Table 7).

The lack of response of N content in leaves to the application of litter may be related to the fact that part of it is still in organic form, which determines a lower efficiency of nutrient uptake by sugarcane (Lourenço et al., 2010). Canabarro et al. (2003) reported that organic N present in organic waste such as chicken litter, has a low mineralization rate and the decomposing microorganisms of the carbonaceous compounds of these materials immobilize part of N in the waste, decreasing the absorption of this nutrient by plants.
Regarding foliar S, there was no significant difference (p > 0.05) between the mineral fertilizer, poultry litter and organic fertilizer (Table 8). The average content of S in leaves with poultry litter and organo-mineral fertilizer application, was 1.4 g kg-1 (Table 8), and according to Raij et al. (1996), S values are below the 1.5 to 3.0 g kg-1 range, which is considered suitable in sugarcane.
Sulphur has high power of lixiviation and due to undeveloped root system early in the crop cycle there is low uptake of soluble S from soil with much of the nutrient amenable to lixiviation. Another point to consider is that in soil SO4-2 is predominantly adsorbed by mineral and organic particles (Alvarez et al., 2007).
There was no significant difference (p > 0.05) between the use of poultry litter, organo-mineral and mineral fertilizer regarding foliar P concentrations (Table 9). However, according  to  Raij  et  al.  (1996),  the  average values of this nutrient in the leaves are within the 1.5 to 3.0 g kg-1 range, which is considered appropriate for this culture.

At these experimental conditions, the mineral fertilizer, poultry litter and organo-mineral fertilizer did not efficiently supply certain macronutrients, both to soil and to plant, remaining below the appropriate levels proposed by Raij et al. (1996) for sugarcane.
Silva (2009), working with the application of organic waste in corn (Zea mays), also noted little variation in nutrient levels in soil and plants. In addition, according to the author, one can attribute this behavior of waste to the fact that an experimental area is naturally homogeneous with medium fertility. Thus, there is the necessity to follow the process in a long term enabling the observation of the performance of organic waste and organo-mineral compounds, which may improve chemical, physical and biological conditions of soil, ensuring the sustainability of the area. It is assumed that the application of these materials in a controlled manner during more crop cycles will provide nutrients in a way that meets the removals.