Soybean yield of degraded pasture after reimplantation with and without phosphating

The objective of this work was to evaluate the effect of different forms of reimplantation of pasture with and without phosphatation aiming to contribute to the increase of soybean yield. The experiment was conducted at the Experimental Farm of Universidade do Oeste Paulista (Unoeste), located in the municipality of Presidente Bernardes - SP. The design was done with split plot scheme, containing four replicates. The plots were constituted with 4 kg ha-1 of Urochloa brizantha (Marandu grass), BNS + Seeding in haul, BNS + Seeding in line consortium with soybean as subplots (with and without phosphatation). The following were analyzed: number of tillers and dry mass yield (PMS); analysis of plant tissue from pasture; foliar diagnosis analysis; and components of production and production of soy. Analyzed variables were submitted to analysis of variance (p <0.05) and means were compared by the Tukey test (p <0.05). In this context, it can be concluded that a higher quality production with a reimplantation of pasture intercropped with a soybean crop yielding an increase of 276 kg ha-1 compared to the treatment that did not have pasture reimplantation (BNS). Phosphate increased soil phosphorus content in the production of soybean dry matter and no leaf phosphorus content and higher soybean yield.

Soybean (Glycine max L.) is the most important oilseed crop in the world. It is currently one of the most important products in the Brazilian economy, occupying a prominent place in the supply of oil for domestic consumption, in animal feed as the main source of protein, as well as in the export agenda of the country (Val, 2014). Brazilian soybean production in the years 2014/2015 was  equivalent  to  45  million  tons  of  grains (Conab, 2015). Soybean has been indicated as an alternative for disease prevention and use in the manufacture of flour, milk, textured protein, biodiesel, paints and varnishes, among others (Ávila et al., 2010).

Another great importance of soybeans is that it stands out as one of the main alternatives in crop rotation in no-tillage systems and, more recently, no crop-livestock integration  system,  as   a   consequence   of   the   great  efficiency in fixing N2 (Santos et al., 2006).

However, it is often observed that the lack of management of the soil-plant-animal system, in association with the inadequate management of the enterprise, has led to the degradation of pastures which, lately, is the greatest obstacle to the establishment of a cattle ranch sustainable in agronomic, economic and environmental terms (Martha Júnior and Vilela, 2002).

Pasture degradation can be seen as an evolutionary process of loss of vigor, yield and natural recovery capacity of pastures to sustain economically, production levels and quality required by animals, as well as to overcome the harmful effects of pests, diseases and weeds culminating in the advanced degradation of natural resources due to inadequate management (Macedo, 2001). For this reason, the importance of the rotation of crops and pastures, which is technically and economically feasible strategy for the recovery and renewal of degraded pastures has been demonstrated (Cezar et al., 2000; Vilela et al., 2002).

The highest proportion of pasture area cultivated in Brazil is composed by plants of the genus Urochloa (Soares Filho, 1994). Urochloa species have high dry mass yield, excellent fertilizer response, are perennial, and remain green during moderate periods of water restriction. Among these species, marandu grass is the most used (Zimmer et al., 1998). The reasons for this preference are that this cultivar is tolerant to low soil fertility and grasshopper, presenting high yield when properly fertilized and managed.

Urochloa brizantha is characterized by its diversity of uses such as direct grazing, forage for fencing and silage, and more recently, for crop-livestock integration or as a straw-growing crop under no-tillage system (NTS) (Dias and Alves, 2008). In the present study, the use of biomass in tropical regions (Rodrigues and Rodrigues, 1987) is important, especially when it receives cultural treatments, soil correction, fertilization, and in some cases, irrigation.

The use of pastures in farming areas, for a period of time, can contribute to the improvement of the physical quality of soils. The herbage legume consortium, that is, the diversification of production, mainly in the use of forage, provides several advantages in the production system, both in the physical properties and in the chemical part of the soil (nitrogen fixation). It also reduces the use of pesticides, promotes the breakdown of diseases and pests, reduces the population of invasive plants, and has a great influence on the increase of farmers' profitability (Cobucci, 2001; Oliveira and Vidor, 2001). The dry mass residues of the pastures allow to recover the organic matter contents of the soil to values â€‹â€‹close to the original (Freitas et al., 2000; Wendling et al., 2005). Furthermore, plant residues  are  indispensable  to  increase the size and stability of the aggregates, favoring erosion control and soil resistance to compaction (Costa et al., 2015). Therefore, Igue (1984) reports that Poaceae contains a greater amount of root, also contributing to the improvement of soil porosity and aggregation.

The most commonly used forms of phosphate fertilization in the production of grain crops are the haul on the surface with or without incorporation in the soil and in the sowing groove in strips (Sousa et al., 2004). Nunes et al. (2011) report that the use of surface phosphating is advantageous in a production system that has a higher response rate at planting, where fertilization occurs before or after planting. Therefore, in order to be able to perform highly efficient phosphating, its application must take place in the best way, allowing a better positioning in relation to the roots (Anghinoni and Barber, 1980), thus reducing the fixation by iron and aluminum oxides (Sousa and Volkweis, 1987).

The objective of this work was to evaluate the effect of different forms of reimplantation of pasture with and without phosphatation aiming to contribute to the increase of soybean yield.

The experiment was conducted at the Experimental Farm of the Universidade do Oeste Paulista (Unoeste) in Presidente Bernardes - SP, at 22°17'27 "S, 51°40'51". The 385 m altitude in the period from January 2014 until February 2015. According to the Brazilian Soil Classification System (Embrapa, 2006), the soil of the experimental area is classified as dystrophic Red Argissolo, with smooth undulating relief.

The experiment was done with Urochloa brizantha (culture Marandu) with five years of implantation, but with low forage production capacity due to degraded pastures. The experimental design was done in bands in a subdivided plot scheme, with four replications. The plots consisted of four systems of pasture implantation and the subplots, with and without phosphate fertilization (Table 1). 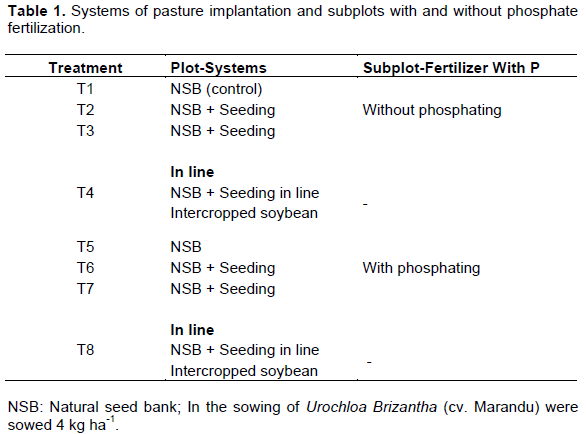 None of the soil attributes were influenced by the interaction between pasture reimplantation systems and phosphate fertilization (Table 2). Grassland reimplantation systems influenced only the pH and organic matter (MO), potential acidity (H + Al) and magnesium (Mg) levels of the soil (Table 3). The highest values â€‹â€‹of pH were verified in the seeding system of the forage intercropped with soybean, in relation to the systems with natural seed bank and sowing of the forage to the haul  (Table  3).  However,  in  tropical  soils  under  pasture it is rare to find excessively high values â€‹â€‹of pH, even if liming is frequent, based on technical recommendations (Oliveira et al., 2008). 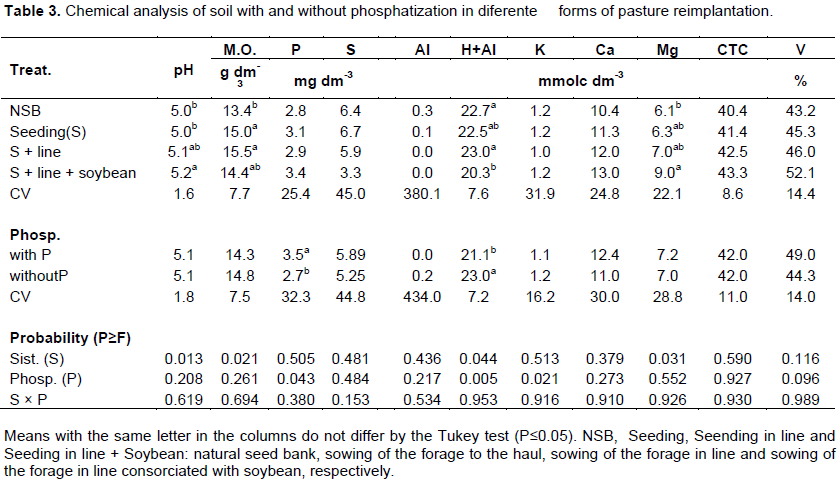 According Raij (1991), Brazilian soils are poor in phosphorus as a result of its source material and the strong interaction of P with the ground, so the match can be considered the most limiting nutrient of biomass of tropical soils (Novais and Smyth, 1999). Prior to redeployment pasture together with the phosphorus fertilization was the value of P (1.7 mg dm-3) after reimplantation of sowing and phosphorus fertilization systems was increased to P (3.5 mg dm-3) (Table 3). However, the use of phosphate fertilization contributed to the increase of phosphorus levels, since there were no significant differences in P content (Table 3). Sa (2004) reports that the application of phosphate fertilizers haul without incorporation into tillage, it is a viable and fertilizer maintenance practice and/or refund for soils that have been fertilized and have average levels to high P (Table 3).

The highest yields of dry matter (DMY) of the forages were verified in forage sowing in line (6.1 Mg ha-1) and forage in line with soybean (6.6 Mg ha-1) and BNS (4.7 Mg ha-1) (Table 4). Phosphate fertilization did not influence forage PMS. According to Kluthcouski et al. (2003), good soil protection requires about 7 Mg ha-1 of dry matter mass, even if the following work did not reach this value (7 Mg ha-1), the dry mass yield found  was  very close to this (6.6 Mg ha-1). 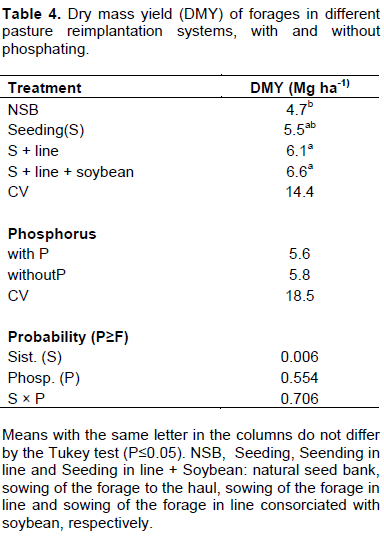 None of the attributes of the pasture mineral composition was influenced by the interaction between pasture reimplantation systems and phosphate fertilization (Table 5). In the table of mineral composition of the pasture in relation to the reimplantation systems of the pasture, the nitrogen content (N) was higher in the natural seed bank system (NSB) and lower in the seeding system of the forage intercropped with soybean (Table 5). Corsi and Nússio (1992) found that the increase of forage production has as one of the promoters, the adequate availability of nutrients, among which nitrogen stands out. 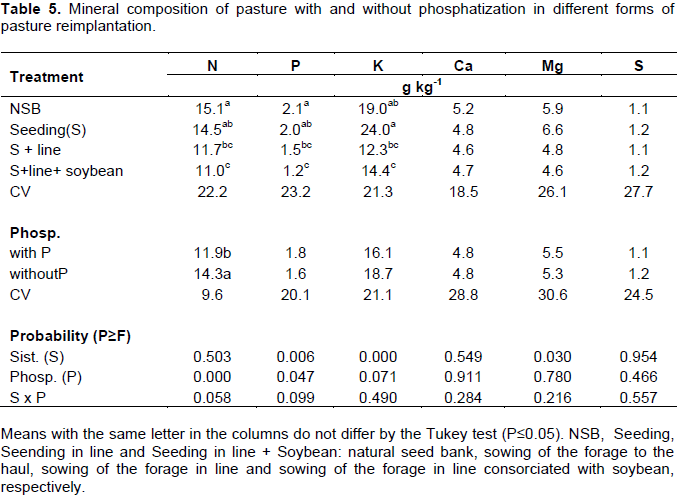 Thus, the same occurred for the phosphorus (P). As for potassium (K), the highest content was in the sowing system to the haul and the lowest in the sowing of the forage in line consorciada with soybean.In relation to phosphate, the difference was only observed for the N content, and when N fertilized with phosphorus, N was lower than without phosphate fertilization (Table 5). 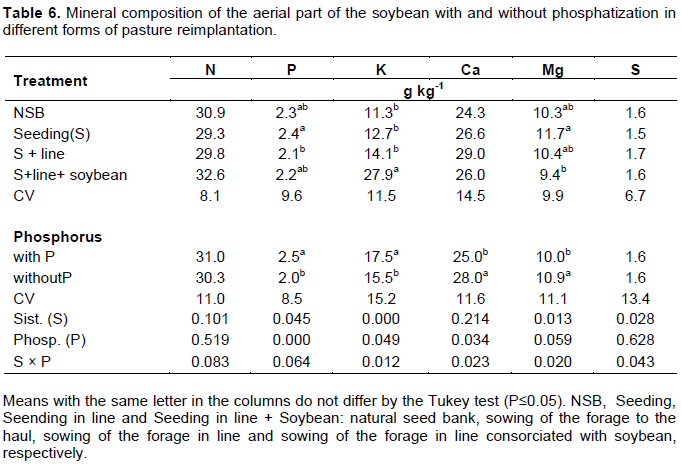 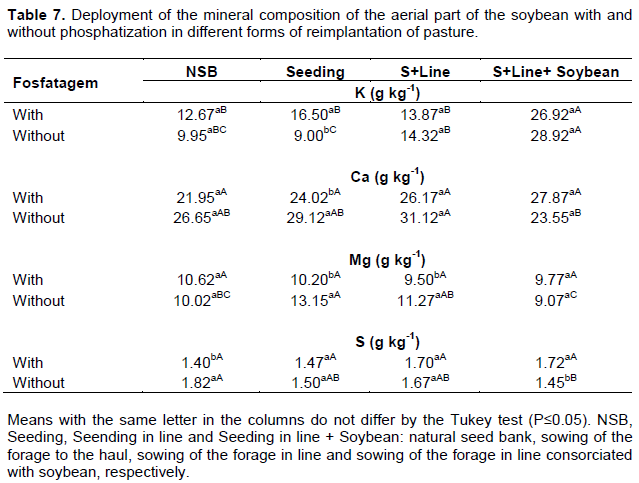 In the forage sowing and sowing systems of in-line forage, phosphate fertilization contributed to lower Mg content in both systems of pasture reimplantation. In the absence of phosphatization, the highest Mg content was verified in the sowing system of the forage harvested and the lowest in the sowing of forage intercropped with soybean. Malavolta (2006) established sufficiency ranges for nutrients P (4-5 g kg-1), K (22-25 g kg-1), Ca (9-10 g kg-1), Mg (3,5 ), S (2.5-3.5 g kg-1), in order to better understand and interpret the results of foliar diagnosis, therefore the contents of P and S are all below, both in the pasture reimplantation system variable and with and without phosphate fertilization. K has the ideal content only in the sowing system of forage intercropped with soybean. The Ca and Mg contents are all mentioned earlier.

None of the soil attributes was influenced by the interaction between pasture reimplantation systems and phosphate fertilization (Table 8). Regarding soybean yield, the highest value was verified in the system of sowing of forage intercropped with soybean and lower in the NSB and sowing of the forage to the haul. Phosphate fertilization contributed to the increase of shoot dry mass (MSPA) and soybean yield (Yield). According to Malavolta et al. (1997), the P sufficiency range indicated for soybean is 2 to 5 g kg-1, therefore, P levels are suitable for soybean cultivation. 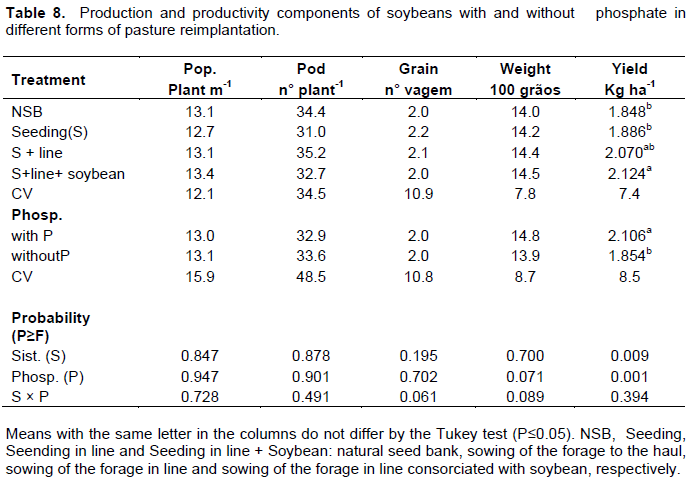 In many areas under the ecosystem, soybeans have been shown to have higher yields on straw of Brachiaria genus, mainly in succession to U. brizantha (Pitol et al., 2001; Kluthcouski and Stone, 2003)

Soybean yield was higher with reimplantation of intercropped pasture with soybean crop. This treatment provided an increase of 276 kg ha-1 in relation to treatment that did not have pasture reimplantation. Phosphate fertilization provided an increase in soil phosphorus content, production of soybean dry matter, on leaf phosphorus content, and higher soybean yield.