With declining wild fish stock vis-a-vis the growing world’s population, demand for fish is ever-increasing due to the health benefits derived from its consumption (Wenaty et al., 2018). Aquaculture is proposed as a viable alternative to increase fish production, enhance nutrition and wealth creation, as well as sustain livelihoods of communities (Alhassan et  al.,  2018).  According  to FAO  (2016),  fish has maintained a prime position over the years as the favourite source of animal protein in Ghana, with about 75% of annual production being consumed locally, with the mean per capita fish consumption estimated at about 26 kg per person.

One of the most cultured fish species in Africa is the African Catfish (Clarias gariepinus). This  species  is  also known as mudfish. The farming of this species is important to many large producing countries, such as Nigeria, where it is a source of income, creates employment opportunities and contributes immensely towards Gross Domestic Product. In most countries, catfish is higher priced than Tilapia; Oreochromis species (Emokaro et al., 2010). This is because Catfish requires less space, time, money and has a higher feed conserving rate than Tilapia (Olagunju et al., 2007). Ghana has the potential for both freshwater and brackish water aquaculture and culture-based fisheries. The fishery sector plays an important role as it contributes significantly to the national economic development objectives relatively to employment, livelihood, foreign exchange earnings, food security and poverty reduction. In Ghana, most large-scale commercial fish farms operate cage culture systems on Lake Volta; others operate both cage systems and earthen ponds (Tall and Failler, 2012).

Ponds are essential components for most land-based aquaculture farms. It is the oldest and most predominant aquaculture system in Ghana (Yeboah, 2009). Ponds may arise naturally in floodplains as part of a river system, or they may be somewhat isolated depressions. Pond differ according to their sources of water, the way in which water can be drained from the pond, the material, and method used for construction, as well as method used for fish farming (Omofunmi, 2016). Ghana have a fish deficit of 151,541.25 metric tonnes, as local production has not kept up to meet demand (MoFAD, 2019). The high demand of fish has led to the quest for innovations in pond design and production efficiency based on construction. One of such novel technologies is the lined-in elevated fish tanks, which has been seen to influence the growth and yield of Catfish in captivity (Amponsah, 2018). Given the demand for modern aquaculture technologies, research to address some key questions in order to encourage the best use of the technology must be carried out. Pond aquaculture in Ghana clearly has a huge potential for growth through sustainable intensification (Frimpong et al., 2014).

Some studies such as Ross et al. (1995), Timmons et al. (1998) and  Oca et al. (2004) have  observed that   the geometry of fish tanks affect the growth and yield of fish in general. Research by Akinwole and Akinnuoye (2012)in Nigeria revealed that Catfish in circular tanks gain weight faster than those in rectangular tanks. The paucity of information on effect of tank geometry on production efficiency and cost for catfish culture could erode gains being made to increase fish production. With the increase in fish consumption and the advent of new aquaculture technologies, it is expedient to assess the performances of such systems for growing Catfish. The aim of this study was to assess the effect of tank geometry on the production of African Catfish and estimate the economic viability of using circular, rectangular and ellipsoid tanks for the culture of this species. This study will be of value to engineers in the design of fish tanks and prospective fish farmers in the selection of best tank geometry for fish production.

The study was conducted at the Aquaponics-based Food Systems (AFS) cottage located at the CSIR-Crops Research Institute, Fumesua in the Ashanti region of Ghana. The location lies between longitudes 0°15′ - 2°25′ West and latitude 5°50′ - 7°40′ North.  The study commenced in October 2019 and ended in February 2020 (16 weeks).

Three fish tanks of various geometry (circular, rectangular and ellipsoid), but approximately the same volume (13 m3), were used for the study (Figure 1).

The fish tank setup is a raised (mounted) canvas-lined pond with its frame constructed using 12.7 cm cement blocks. The biological filter (biofilter) arrangement, composed of two (2) submersible pumps, flexible water hoses, nylon mesh sieving material, sedimentation/waste tank with its accompanied plumbing components, was installed on each tank to complete the setup. The biofilter is the single most important component of the tank system as it controls waste produced from the fish culture activities. Biofilters use natural processes and organisms (bacteria) through the nitrogen cycle to break down ammonia into less harmful components.  It also helps to remove faecal waste and leftover feed from the pond water to ensure that the water is conducive for fish culture (Fredricks, 2015; Woynarovich et al., 2011). Per its operation, the tank setup can be termed as recirculatory aquaculture system.

A total of 1000 fingerlings of African Catfish (Clarias gariepinus), with average weight of 13±2 g, were stocked in each of the three tanks per geometry. Prior to stocking, the tanks were cleaned and sterilized with brine solution to ensure the tanks are free from any harmful bacteria. Water from a mechanised borehole was used for this experiment. Pelleted fish feed of different sizes from a commercial producer (Ranaan) was used through-out the study. The fish were fed thrice daily by response feeding based on percentage body weight; between 8.00-9.00, 14:00- 15:00 and 20:00-21:00 h. The ration was adjusted every two weeks when new mean weights of fish for the various experimental units were determined. Leftover feed and faeces in each tank were removed daily through the biofilter arrangement. The water in the tanks was topped up at least twice weekly with borehole water. The tanks were exposed to the sun (uncovered) and inspected daily to remove dead fish, if any, and to ensure the system is working to expectation.

Data on fish growth characteristics were recorded bi-weekly using 30 fish sampled from each tank (that is, 3 replications of 10 fish per tank geometry) using a scoop net. Live fish were returned to their respective tanks after measurement. A completely randomised design of three replicates was adopted for this experiment. Tank geometry is the single factor and the responses are the measured parameters (length increment, weight gain, specific growth rate, feed conversion ratio and mortality). The weight (grams) of individual fish was determined with an electronic sensitive scale (model KERN 572). Total Length measurements were determined with a measuring board (centimetres). The growth parameters were calculated following the method of Bagenal and Gerking (1978)in Equations 1 to 6: 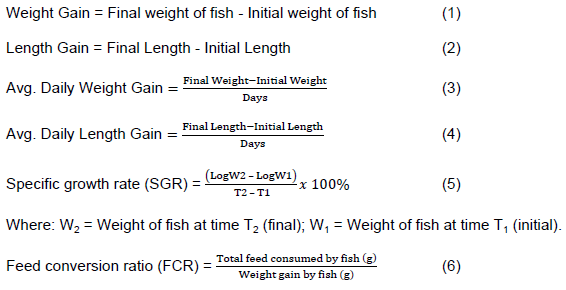 Where: No =  Initial  number  of  fishes  stocked  at  the  start  of  the experiment; Mf = Mortality at the end of growth period.

Benefit Cost Ratio (BCR) was determined for catfish production in circular, ellipsoid and rectangular tanks to measure the cost effectiveness of these production systems. BCR was calculated using Equation 8 following the method of Shively (2012):

Water temperature, pH, DO and TSS ranged from 24.9 to 26.2°C, 6.39 - 7.53 mg/l, 3.96 - 8.53 mg/l, 25 - 454 mg/l, respectively (Table 1). Water temperature recorded for all three tank geometries were closely related to one another, and fell within the recommended range (22-35°C) proposed by Akinyemi (1988) as a suitable temperature range for Catfish culture. Water pH recorded for all three tank geometries were within the optimal recommended range of 6.5 to 9.0 for Catfish culture according to recommendations by Boyd and Tucker (1998). For the circular and ellipsoid tanks, all DO recording were above the minimum recommended threshold of 5 mg/l (Water Resources Commission, 2003). The rectangular tank in contrast, recorded DO values as low as 3.96 mg/l in the final month of production. Waste hiding at the corners of the rectangular tanks could have contributed to this situation. Notwithstanding, DO range of 3 to 8 mg/l, according to Akinwole and Akinnuoye (2012), is generally considered suitable for freshwater fish culture. Overall, the rectangular tank recorded larger TSS values than the other tanks, especially at the latter stages of production. This confirms the assertion by Mansour et al. (2017)that higher TSS levels causes reduction in DO levels. The shape  of    the   circular    and   ellipsoid   tanks  probably enhanced the dissolution of atmosphere air which increased the dissolved oxygen in these tanks. Thus, slightly higher growth could be expected in the Catfish cultured in circular and ellipsoid tanks. 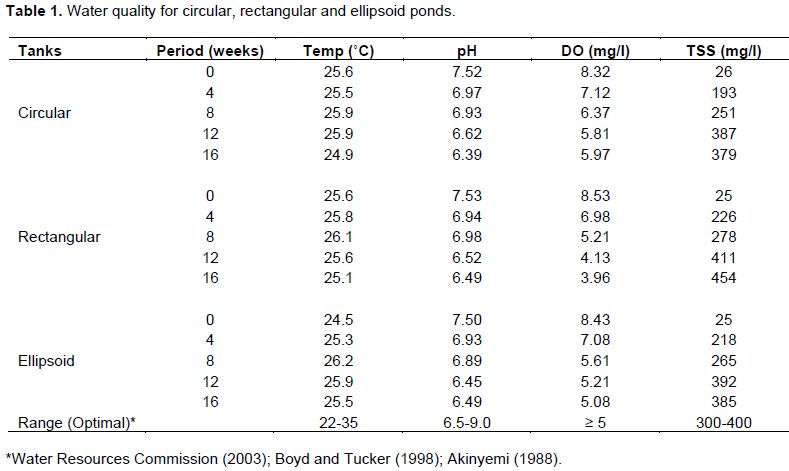 The length for fish in all three tank  geometries  increased along the growth period from week 1 to 16 ranging from 10 to 36 cm, 10 to 34 cm and 10 to 38 cm for circular, rectangular and ellipsoid tanks, respectively (Figure 2). The rectangular tank recorded the least increment in fish length, whilst the ellipsoid tank recorded the highest. The differences in fish length increment could be attributed to the effect of water quality from accumulation of uneaten feed deposition at the corners of the rectangular tanks. This  probably  compromised  the  water   quality   in   the rectangular tank as indicative in the lower levels of DO and higher TSS levels observed (Table 1). 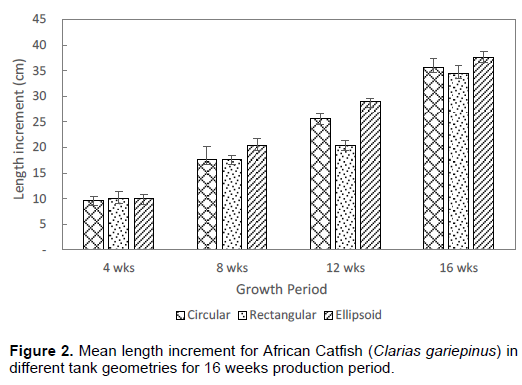 There was a general increase in mean weight gain along the growth period (0-16 weeks) (Figure 3). Weight gain ranged from an initial weight of 14 - 431 g > 557 g > 576 g for circular, rectangular and ellipsoid tank geometries respectively along the growth period (0-16 weeks). Generally, the rectangular tank recorded the least mean weight gain in comparison to the circular and ellipsoid tanks throughout the growing period. This could again be attributed to the better water quality parameters (DO and TSS) recorded within  the  circular  and  ellipsoid tanks during production (Table 1), as confirmed by Timmons et al. (1998). 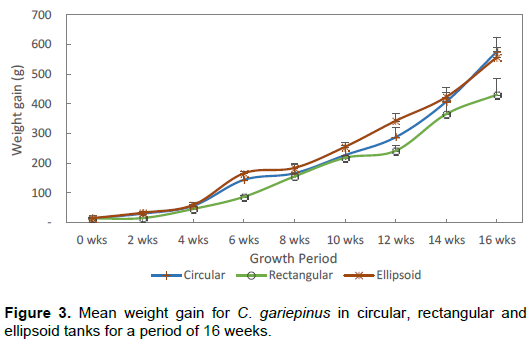 The SGR of Catfish respectively ranged from 0.40 to 3.64 g/day, 0.11 to 2.27 g/day and 0.79 to 3.12 g/day for circular, rectangular and ellipsoid tanks (Figure 5). Results seem to show that for all three tanks, there was higher SGR at the  start  of  production  (0-8  weeks)  and then a sharp decrease in value from the middle to the end of production (8-16 weeks). This could probably be the cause of higher DO and TSS levels. Though generally the circular and ellipsoid recorded higher SGR values compared to the rectangular, there was no significant difference (P = .05).

The average survival rate of Catfish for circular rectangular and ellipsoid tank geometries was 91, 88 and 96%, respectively (Figure 6). A general perspective of the results shows higher survival rate for fishes in the ellipsoid and circular tanks  compared  to the rectangular. 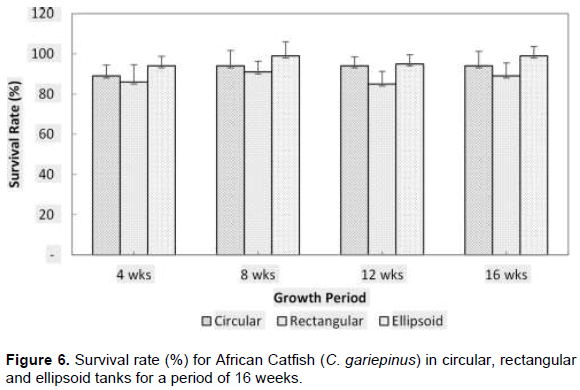 However, this was not significant (Table 2). This could be attributed to the effect of some water quality parameters such as DO and TSS, as suggested by Nyanti et al. (2018). Except for weight gain and feed conversion ratio (FCR), all other parameters (length increment, specific growth rate and survival rate) showed no significant difference (P = .05) among all 3 tank geometries (Table 2).

The results of the economic analysis showed that the benefit cost ratio (BCR) for the circular, ellipsoid and rectangular tank was 1.12, 1.13 and 0.79, respectively. This implies that it is more profitable culturing African Catfish (Clarias gariepinus) using the circular and ellipsoid than the rectangular pond.

Circular and ellipsoid tanks are more productive for catfish culture. Economic analysis suggests  that  the  production system adopted may increase total cost of production. Further studies and modification of rectangular tanks intended for catfish production is recommended to enhance its efficiency and profitability for aquaculture by engineers in the water sector. Advocacy, promotion and efficient adoption of circular and ellipsoid tanks aquaculture technologies could boost catfish production in urban and rural areas.

Authors have declared that no competing interests exist.