The aim of this study was to determine trap efficiency on capturing fruit fly Ceratitis capitata. The research was conducted in greenhouse of the Entomology Laboratory of the Department of Plant and Environmental Sciences, Agricultural Sciences Center of the Federal University of Paraiba – CCA/UFPB, Areia – PB. The trap efficiency was evaluated by comparing three types (Delta, Pet and Circular Trap) with standard trap of McPhail type using liquid and semi-solid lures: Bio Anastrepha® 5% and CeraTrap®. Traps were equidistantly arranged in the experimental environment where eight releases of 300 adults of C. capitata, newly emerged, were carried out. The effectiveness of traps was evaluated according to the number of captured flies in the set period. Data were subjected to variance analyses and Tukey test. Standard trap of McPhail type and alternative trap of Pet type were the most efficient on capturing C. capitata in greenhouse environment. The alternative trap of Pet type can replace the standard one on C. capitata trapping.
Key words:  Fruit production, hydrolyzed proteins, Mediterranean fruit fly.

A large part of the damage is done on the global fruit production due to the infestation of fruit flies as a result of direct and indirect damage caused by oviposition of these insects in fruits (Zucchi, 2012). Direct damages are from pulp consumption for their larvae and indirect are caused by entry of pathogens in holes during oviposition (Lozano-Tovar et al., 2015), both make fresh consumption of fruits impossible by invalidating fruit marketing, not only by the depreciation of fruit quality but also due to quarantine restrictions imposed  by  importing countries (Raga et al., 2006). Thus, there are a phytosanitary barrier in the marketing of fresh fruit to the United States and some European countries (Carvalho, 2005; Zucchi, 2008).

Mediterranean fruit fly, Ceratitis capitata Wiedemann (Diptera: Tephritidae), is one of Tephritidae species which has polyphagous food habit and has wide distribution throughout the world and is considered one of the most damaging species, focusing on more than 350 species of plants  (Carvalho,  2005).  It  was introduced in Brazil in the early century (Gallo et al., 2002) and is already present in 24 states, associated with 58 fruit species of 21 families (Zucchi, 2012; Lozano-Tovar et al., 2015).

The production of fruit in Brazil has achieved â€‹â€‹significant technological advances, but still has serious problems regarding the quality of produced fruit, some attributed to phytosanitary restrictions required by importing countries (Bittencourt et al., 2006). From these requirements is difficult to establish control measures of insect pests. Measures have to fit producer conditions and different production areas of national fruit production (Raga, 2006).

Fruit flies monitoring is a key part to control start of these insects in any integrated management system of pests (Malavasi and Zucchi, 2000). By monitoring, it will be possible to characterize these tephritids, and know the exact moment for a proper control measure. Thus, the use of traps is essential because monitoring efficiency and control of fruit flies are associated with the quality of traps and baits used and its arrangement in field. The most common type of trap used to capture these tephritids is the commercial trap, McPhail (Barros et al., 1991; Lasa et al., 2013, 2014a, 2015), but it can also be used some alternative models made â€‹â€‹of recycled materials and/or lower cost than commercial product using the same principle, which is the adults lure with food baits without distinction of species (Lasa et al., 2013, 2014b).

Lasa and Cruz (2014), comparing McPhail trap with the alternative of transparent bottles with holes on the side combined some protein lure. They found that alternative trap was more efficient on capturing Anastrepha ludens Loew (Diptera: Tephritidae). Khater et al. (1996) achieved excellent results in the use of yellow sticky traps on Bactrocera oleae Rossi (Diptera: Tephritidae) monitoring in olive orchards (Olea europaea). By associating different lures in McPhail traps and in alternative traps adapted from transparent bottles. Scoz et al. (2006) reported similar efficiency on Anastrepha fraterculus Wiedemann (Diptera: Tephritidae) capturing. Within this perspective, the objective of this research was to determine the efficiency of traps associated with food lures in adult Ceratitis capitata trapping.

The research was conducted in a greenhouse environment (anti-aphid screen) with dimensions of 9 x 6 m, covered with transparent acrylic plastic, and in Entomology Laboratory both are from the Department of Plant and Environmental Sciences, Agricultural Sciences Center of the Federal University of Paraiba– CCA/UFPB, Areia – PB, with 12 h photoperiod, temperature and relative humidity not controlled.

The adults of C. capitata used in research were derived from a mass rearing  maintained  at  the  Entomology   Laboratory   of   the Department of Plant and Environmental Sciences of the Agrarian Science Center of University Federal of Paraiba – CCA/UFPB, Areia – PB, reared according to the methodology described by Brito (2007) at temperature of 25 ± 1°C, relative humidity of 70 ± 10% and photoperiod of 12 h.

In each type of trap, two types of food lures were used, hydrolyzed protein Bio Anastrepha® (Bio Control, São Paulo, Brazil) and CeraTrap® (Bioibérica S.A, Barcelona, â€‹â€‹Spain) in liquid and semi-solid form. In McPhail and Pet traps were placed 325 ml of liquid lure/trap. CeraTrap® was used without dilution and Bio Anastrepha® was diluted in water at 5%, both as recommended by the manufacturer. For the use of semisolid lure, both were lyophilized and concentrate content was placed in plastic adapted container (1.5 x 1.0 cm), suspended for a galvanized wire on top and inside of Circular and Delta type traps.

To compare the effectiveness of these traps, a design consisted of randomized blocks in a factorial scheme (4 x 2 x 2 x 4) was conducted: Four traps with type McPhail trap as a witness, two lures (Bio Anastrepha® and CeraTrap®), both sexes (adult males and females), and four replications. Treatments were arranged in the greenhouse environment at a distance of 4 m from the center, with a circular container of transparent plastic (15 x 30 cm) containing circular openings of 1.5 cm in diameter, which 300 adults newly emerged were released in the proportion 1:1 of C. capitata. Traps with lures and container with insects were suspended at 1.5 m height.

A total of eight releases were carried out â€‹â€‹(at five-day intervals), in order to trap/lure combination at same position in the greenhouse environment, at each release lure of traps were also renewed.

The efficiency of traps evaluation was conducted from the number of insects captured after 24 h of release, females and males were recorded. The collected experimental data were submitted to variance analyses and Tukey test at 1% probability. 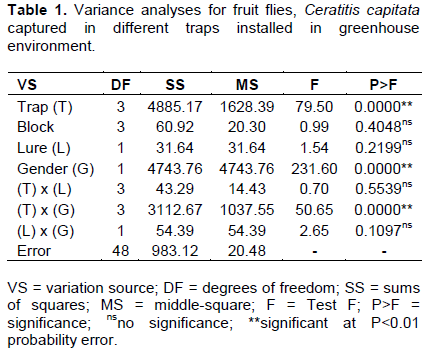 Standard traps of McPhail type and alternative of Pet type were effective on capturing fruit flies C. capitata in greenhouse environment, accounting for 48.79 and 39.85% of the total adults trapping, respectively (Table 2). However, traps have no statistical differences when compared within each lure. 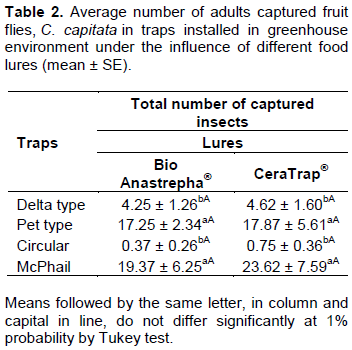 Despite the acquisition and maintenance costs, traps of McPhail type are commonly used in monitoring and tephritids control, being more efficient than traps that use dry baits. They are even more effective in dry season, by providing food and water, facilitating the search and capture of flies (Perea-Castellanos et al., 2015). Thus, it still needs further studies to explore the association of a trap with less expensive lure. The solution may be the traps that use the same action mechanism and cost less due to its reusable material. The results of this study indicate that trap of Pet type had similar efficiency as compared to standard trap of McPhail type.

In several experiments conducted by Scoz et al. (2006) under various conditions, the alternative model of trap, made â€‹â€‹from Pet bottles, was equivalent to McPhail model in the capture of A. fraterculus adults. Aguiar-Menezes et al. (2006) found the efficiency of fly trap bottle made â€‹â€‹from Pet transparent bottles by protein hydrolyzate 5% as bait, whose results suggested that this trap type is equal or sometimes superior to McPhail standard trap on the capture of Anastrepha spp. and C. capitata.

Lasa and Cruz (2014) compared McPhail trap  with  the alternative made â€‹â€‹of transparent bottles with holes on the sides, combined some protein lures, and found that alternative trap with Cera Trap® was more efficient on capturing A. ludens. Rodríguez et al. (2015) found that Cera Trap® associated with inexpensive traps made â€‹â€‹of transparent bottles were effective in the control of A. serpentina Wiedemann (Diptera: Tephritidae). However, Duarte et al. (2013) used Moscatex® lure (pure or mixed with guava juice) and found that McPhail trap was more efficient than the weak fly trap in the capture of Anastrepha spp. and C capitata.

The superiority on C. capitata capturing of standard traps of McPhail type and Alternative of Pet type as compared to traps of Circular and Delta type can be directly related to lure ability or dispersion of lure substances of liquid product as compared to semi-solid. Some research has shown the greatest trapping ability with liquid bait as compared to solid baits (Pingel et al., 2006; Thomas et al., 2008).

Research on this topic reported that not all flies that come into McPhail traps are captured. Aluja et al. (1989) and Díaz-Fleischer et al. (2009) stated that approximately 20% of the flies that come into the trap are able to feed and escape. It is a risk when uses no lures combined with chemicals. There is the possibility that these flies only get protein needed to reach sexual maturity.

Regarding the number of C. capitata females captured by different traps, it was found that there was a significant difference, especially McPhail trap, with an average of 38.87 females/trap (Table 3). Regarding the capture of males, no significant difference was observed between different traps. In all the traps, with exception of circular, the average adult females captured were higher than the captured male mean. In total, 90% of females and only 10% of C. capitata males were captured. 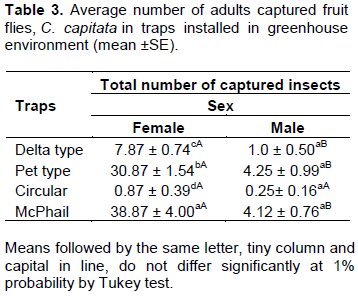 With similar results to this study, Azevedo et al. (2012) verified the efficiency of traps adapted from plastic bottles and liquid lure Bio Anastrepha® when compared with other lure substances and a number of adult female higher than male captured was also observed for both Anastrepha spp. and C. capitata. Lasa and Cruz (2014) and Lasa et al. (2014a) verified the superiority of traps adapted from plastic bottles on McPhail standard trap when combined with Cera Trap® liquid lure in the capture of A. obliqua  Macquart (Diptera: Tephritidae) females.

Monitoring is important for conducting research on the behavior of these tephritids in field, acting as alert for control started at the right time. Evaluation of low-cost traps and effective and reliable food lures must constantly be performed (Scoz et al., 2006) for practice success, because cost is an important  factor  for the choice of trap

for monitoring and control of insects, especially concerning small properties. Traps of plastic bottles can be an excellent option to capture diptera, due to its efficiency and cost reduction in fruit production.

Some authors such as Barros et al. (1991) and Lorenzato (1984) have different opinions on the use of traps adapted from plastic bottles. The first stated that these models when compared to McPhail trap are less effective on A. fraterculus capturing. The second shows that there is similarity on fruit flies capturing when two models were used, and indicate traps of plastic bottles, because the cost is an important criterion in the choice of a good trap for monitoring and control.

To capture adults of diptera is a good option to reduce the damage caused to the fruit production. However, this method should be associated with others within the integrated management system of pests for greater effectiveness.  Method adoption by producers is required to offer some advantages beyond efficiency, such as, economic viability and practicality. Therefore, further studies that associate best the combination of traps and lures are necessary.

The Pet trap type is an alternative to capture Ceratitis capitata females when associated with Bio Anastrepha® and/or CeraTrap® lures.