Effect of a biocide treatment on microbes in sweet sorghum juice

Microbial contamination of sweet sorghum juice can result in loss of fermentable sugars used as bioproducts. A carbamate-based biocide in doses of 200 and 400 ppm used in the sugarcane industry was applied to sorghum juice collected from 4 and 8 in billets, or whole stalks, and growth of microbes was evaluated. Dosing with 200 ppm biocide reduced the microbial count in juice samples by approximately 99%, but a residual microbial count had potential to consume sugars in the juice and replicate. Increasing the dose to 400 ppm did not eliminate microbial contamination. Some of the contaminating microbes were found to be spore-formers, which enhances their ability to survive biocide treatment.

Sweet sorghum [Sorghum bicolor (L.) Moench] is a C4 graminaceous crop with fermentable sugar-containing juice in its stalks. The juice of sweet sorghum is being pursued as a feedstock for production of ethanol and other bioproducts because the crop is conducive to growth in regions such as the southern United States (Linton et al., 2011; Nghiem et al., 2013). Although sweet sorghum generally yields less sugar per acre when compared with sugarcane, advantages of sweet sorghum include, tolerance to heat, drought and salt; high carbohydrate content; and low water and fertilizer requirements (Almodares and Hadi, 2009). Microbes present in the environment can contaminate sorghum juice during processing. Sugars present in the juice are then consumed by the microbes, and are subsequently unavailable for conversion into bioproducts. Consumption of sugars occurs via metabolic processes that are unique to individual classes of microbe, and results in reduced sugar yield. A microbe of concern as a cause of sugar degradation in juice is Leuconostoc sp. (Michelena et al., 2006), but it should not be the sole focus of a contamination control scheme. For example, an antimicrobial agent that offers complete control of a single class of microbe, such as Leuconostoc sp., thereby makes the sugars available for expanded growth of other contaminating microbes that are not susceptible to that agent. Microbial contamination presents challenges  to  the  goal   of  storing   sorghum   juice   for processing outside harvest season, thereby extending financial profitability of the mill. Juice storage can allow continued microbial growth and sugar reduction. In addition, microbes can release metabolites that interfere with sugar processing (ASI, 2002).
Biocides have been employed in sugarcane mills in an effort to control microbial contamination and sugar degradation in cane juice. The application of 10 ppm of a carbamate-based biocide was found to reduce microbial growth in juice from sugarcane, while another biocide used in sugarcane mills, sodium hypochlorite (bleach), was found not to be effective (ASI, 2002). Biocides have not been widely used in sorghum milling operations. In this study, a carbamate-based biocide used in local sugarcane factories was studied for effectiveness against microbes that contaminate juice from sorghum grown in the same region.

Sorghum stalks from 4 cultivars, Dale, M-81-E, Theis and Topper, were harvested by hand when Dale was between the hard and soft dough stage in Houma, LA, USA, a subtropical locale. Dale was the first cultivar to mature. Four stalks for each combination of cultivar and billet length constituted a treatment. Each treatment was replicated 4 times, for a total of 16 experimental units for each billet length. One treatment was left uncut (whole stalks) and stalks within a single replicate were bundled by tying with rope. Other treatments were cut into 4 or 8 in billets using a rotary saw. All billets from a single replicate were placed in a plastic crate (21 in wide x 14 in deep x 11 in high). The whole stalks and billets in crates were incubated outdoors on grass for 7 day prior to milling. Billets were passed through a tabletop roller mill to collect the juice. The roller mill was not sanitized between collections in order to better represent the unsanitized conditions in commercial mills. Immediately prior  to  juice  collection,  whole  stalks  were  cut  with  a lopper into 6-8 in sections, a suitable length for passage through the mill. Juice from milling was placed in 15 ml sterile conical centrifuge tubes. One tube of each received no biocide, the other two received 200 (1x) or 400 ppm (2x) of a carbamate-based biocide (Busan 881, Buckman, Memphis, TN, USA). All tubes were stored at 4°C until microbial enumeration.
For cell counts of juice from individual cultivars with or without a 1x biocide treatment, juice was serially diluted in sterile 0.85% sodium chloride immediately prior to plating, and a 100 µl aliquot of diluted juice was spread on nutrient agar (NA) plates (Difco, Sparks, MD, USA). The plates were incubated at room temperature. Colonies were enumerated daily for up to 7 days, until no additional growth was observed. For presence or absence of growth in juice from all cultivars combined after treatment in a subsequent experiment, with either 1x or 2x doses of a biocide, a 100 µl aliquot of juice was spotted to NA on quadrant Petri dishes. Plates were incubated at room temperature and colonies were enumerated daily for up to 7 days, until no additional growth was observed. Microbes that appeared dominant on spread plates, based on visual observation, were isolated to purity by serial transfer to NA and identified using a microbial ID system (Biolog, Hayward, CA, USA). All data were calculated as means of replications, and are reported with standard deviations.
Mention of trade names or commercial products in this publication is solely for the purpose of providing specific information and does not imply recommendation or endorsement by the United States Department of Agriculture (USDA). USDA is an equal opportunity provider and employer. 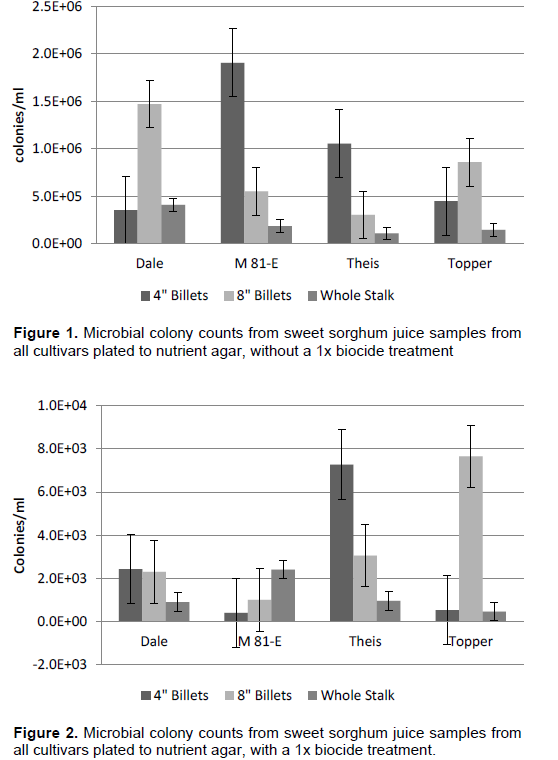 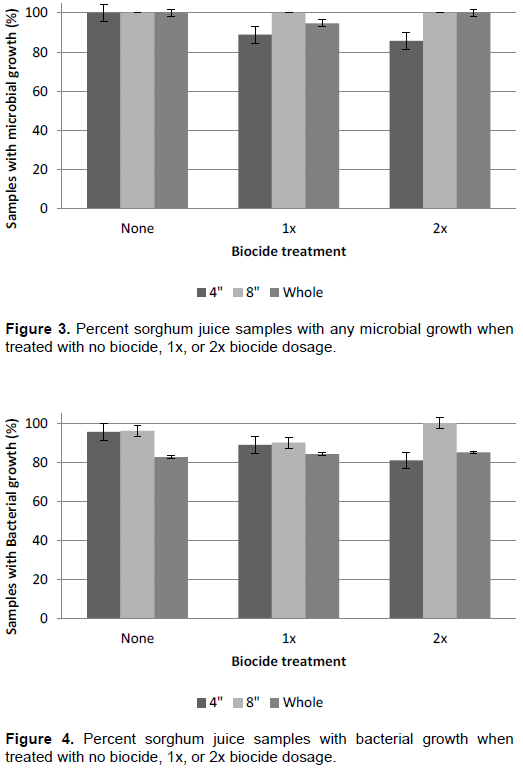 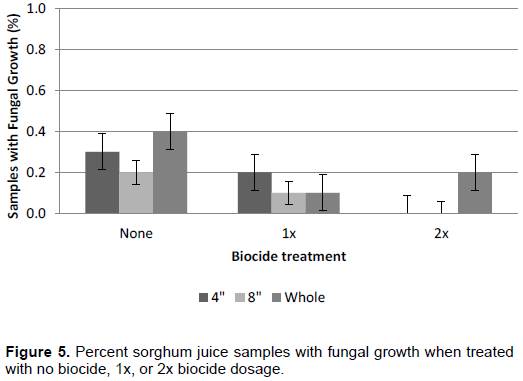 Sweet sorghum, with a fermentable sugar content of 16 to 18% has a broad range of potential uses including sugar, syrup and fuel (Ratnavathi et al., 2011). While microbes are used after juice collection to ferment the sugars into desired bioproducts, undesired contaminant microbes can convert these sugars prematurely, thereby reducing sugar availability. Multiple microbes including bacteria, fungi and yeast can be introduced to juice from the field. A potential means of controlling microbial contamination of juice is the application of biocidal chemicals.
Visibly dominant contaminants of juice were identified and found to include spore-forming strains. Of the microbial strains that were isolated and identified, 85% were a species of Bacillus, with the majority being Bacillus megaterium (40%), and Bacillus cereus (30%). The chemical composition of spore structures is different from that of vegetative cells. In addition, the composition varies among species in the same genus, and can reduce the effectiveness of a biocide in a mixed culture of spore-formers   which   are   more   resistant   to   biocidal treatment than vegetative cells (Leggett et al., 2012).
Mycobacterium confluentis was also isolated from sorghum juice samples and comprised 10% of the identified strains. While Mycobacterium does not produce spores, mycolic acid lipid components of its cell envelope contribute to cell impermeability and can limit biocidal effectiveness (Marrakchi et al., 2014).

Biocide treatment significantly  reduced  microbial  counts in juice from 4 in billets of M 81-E and Topper, and juice from 8 in billets of Dale. Biocide did not significantly reduce the microbial population of juice from either 4 in or 8 in billets of Theis. Biocide treatment did not eliminate microbial contamination from any juice samples, and seemed to have the greatest overall impact on juice from whole stalks, which had a lower total microbial population. Using biocide treatment for stabilizing sorghum juice prior to processing is not a long-term solution. Residual microbes will replicate and consume the sugars that are desired for fermentation. Biocides may be effective for  short-term  use  during  post-harvest processing. A combination of biocide treatments may also be necessary to give sufficiently broad control of microbes to prevent undesirable conversion of the sugars in sorghum juice prior to fermentation.