Soils in Kakamega County, Western Kenya are predominantly Acrisols, Nitisols and Ferralsols (Jaetzold et al., 1982; NAAIAP, 2014). These soils are strongly weathered, with low pH, available P and cation exchange capacity (CEC) (IUSS Working Group WRB, 2015). The fixation of P in acid soils in the form of Al and Fe phosphates renders it unavailable for uptake by plants (Zhu et al., 2017). These conditions are further aggravated by continual cultivation in small holder farms without adequate replacement of nutrients. The use of inorganic fertilizers and lime to amend soil acidity and improve soil chemical properties is still low with about 7% of the farmers in Western Kenya applying lime (Kenya Markets Trust, 2019). Sugarcane bagasse ashes (SBA) from sugarcane mills in Western Kenya and decomposed cattle manure have the potential to improve soil properties. They are locally available and can provide an alternative for disposal of SBA in a useful way.

Bagasse ash contains micronutrients, secondary macronutrients (Mg and Ca) and primary macronutrients P and K (Khan and Qasim, 2008; Huotari et al., 2015; Benbi et al., 2017; Hale et al., 2020). The major role of Ca in soils and plants in addition to being an essential nutrient is to exclude or detoxify other elements such as Al and Mn present in acid soils (Fageria and Moreira, 2011). Application of manure can result to improved soil physical, chemical and biological properties (Thind et al., 2016). This study determined the effects of SBA and decomposed cattle manure on soil pH, available P, and CEC under field conditions.

The study used a randomized complete block design, with a 3 × 3 factorial arrangement of treatments, and 3 replications. It included 2 factors: cattle manure at the rates 0, 5, and 10 t ha-1 and soil conditioner at 0 and 5 t ha-1 sugarcane bagasse ash, and 2 t ha-1 lime. Plots that received 2 t ha-1 of lime were considered as positive controls, while plots that did not receive any amendment were negative controls. Plots of sizes 5 m × 4 m used during this field trials, received the treatments at random.

The sampling of soil, preparation of samples, and storage, for physical and chemical analyses followed procedures described by Anderson and Ingram (1993). Decomposed cattle manure was collected from Bukura Agricultural College in Western Kenya. The cattle manure was decomposed using composting method, and this followed procedures described by Rynk et al. (1992). The lime was sourced from Omya International AG Baslerstrasse, 42 4665 Oftringen Switzerland www.omya.com.

Total nitrogen was determined by Kjeldahl method (Page et al., 1982) and total organic carbon, by Walkley-Black method, following the procedures of Anderson and Ingram (1993). The initial soil properties are presented in Table 1. The pH was low (medium acid) suggesting that H and Al ions toxicity were possible (FAO and ITPS, 2015; Jaiswal et al., 2018); and the soil deficient in nitrogen and P. Soil organic matter content required to be improved (Table 1). 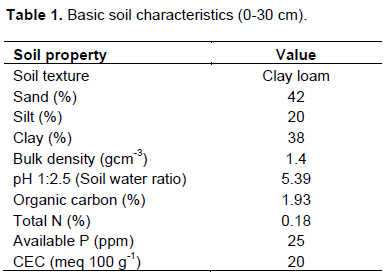 The analysis of cattle manure and SBA for the chemical properties: pH, and total elements content, followed procedures and methods described by Okalebo et al. (2002) for plant tissue analysis. The characteristics of the amendments are shown in Table 2. 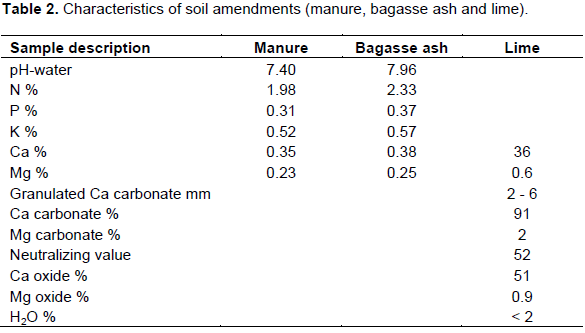 Land preparation and application of treatments

Land preparation was carried out in the short rain season using a tractor driven plough and harrow. In the long rain season land was prepared manually. The SBA was collected from West Kenya Sugar Company Limited. The bagasse ash was passed through a 2 mm sieve prior to its application in the field to enable a compatible mix with the soil particles. The bagasse ash, manure and lime were placed on top soil (15 cm depth) at planting according to treatments and mixed with soil thoroughly. The mixes were covered with light soil before placement of the seed to avoid seed burn. Maize was planted as a mono crop during the short and long rain seasons, at the spacing of 75 by 30 cm. Two seeds were planted per hill; later thinned to one seedling per hill two weeks after emergence, to give the recommended plant population of 44,444 plants per hectare.

Data were subjected to analysis of variance (ANOVA) using SAS software for windows 8.2 (TS2M0) 1999 – 2001 by SAS Institute Inc., Cary, NC, USA. Where the Fisher’s protected F-test was significant, mean treatments were separated using Least significant difference (LSD) test at P≤0.01 level of significance. The statistical analyses and presentations for the data on soil parameters were done on the basis of the data collected for the two seasons.

The objective of this study was to determine the effect of sugarcane bagasse ash and cattle manure amendments on soil pH. This was achieved by laboratory analysis of soil samples from the field under maize cultivation before the beginning of the field experiment, at the end of the first and second seasons, then subjecting the data to statistical analyses respectively. The results of the study revealed highly significant interactions among season, manure and conditioners (lime and bagasse ash) on soil pH at P≤0.01. Highly significant differences in pH values between seasons were observed with combinations of 5 t ha-1  decomposed  cattle  manure  and  2 t ha-1 lime,  and application of 5 t ha-1 manure with no soil conditioner (Table 3). In these treatments, the soil pH values at the end of the 2nd season were significantly higher than values obtained at the end of first season (Table 3). The interaction of 5 t ha-1 manure with 2 t ha-1 lime significantly yielded the highest pH values in both seasons. 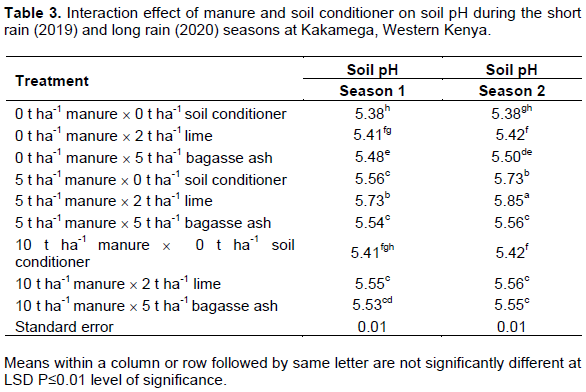 Treatment 5 t ha-1 bagasse ash when incorporated with 5 t ha-1 manure gave pH values that were not significantly different in the two seasons but were significantly higher than treatments with no soil amendments in both seasons (Table 3). The results show that the interaction of manure at the rate 0 t ha-1 with bagasse ash caused a significant increase of pH compared to its interaction with lime at the end of seasons 1 and 2. However, high improvement of soil pH was observed mostly when lime interacted with either 5 or 10 t ha-1 manure unlike bagasse ash.

The initial soil pH value was 5.39, which was not conducive for crop growth due to toxicity of H+ and Al3+ ions (Jaiswal et al., 2018). The application of manure combined with lime, manure only and manure combined with SBA significantly lowered soil acidity. The pH values of SBA and cattle manure were 7.96 and 7.40, respectively confirming their effects in raising soil pH. Liming in combination with farmyard manure is more efficient for acidity indicators than its application alone and reduces the amount of mobile Al to a level that is not toxic to plants (Karcauskiene et al., 2019). Lime (positive control) and manure contained 0.36% and 0.35% Ca and 0.6% and 0.25% Mg, respectively (Table 2). The reaction of lime with soil to release Ca and/or Mg ions into the soil solution leads to increase in soil pH and the reduction in exchangeable Al ions due to precipitation of H+, Al3+, Fe3+ and Mn4+ ions (Kisinyo et al., 2013). These amendments were reapplied in the second season, hence released bases over time. The results of this study concurs with research findings in the Nordic Countries where the application of ash at the rates 3 to 5 t ha-1 decreased soil acidity, increased base saturation and the total amount of nutrients (Huotari et al., 2015; Hale et al., 2020). Mineralization of manure over time also released basic elements into the soil. Manure used in the study contained 0.35% Ca and 0.23% Mg, respectively. The increase of soil pH in plots that received decomposed cattle manure after two seasons contrasts findings of a long-term field experiment where the  stabilizing  effect of farmyard manure (FYM) on soil pH was not proven. After 14 years of FYM application pH decreased at all the sites in the study (Vasak et al., 2015). 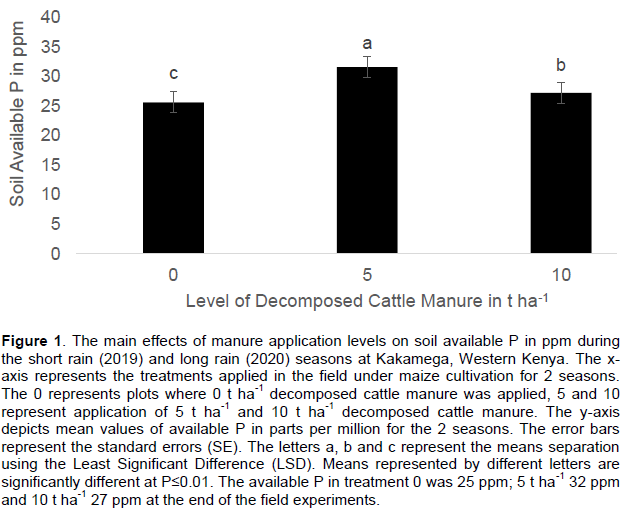 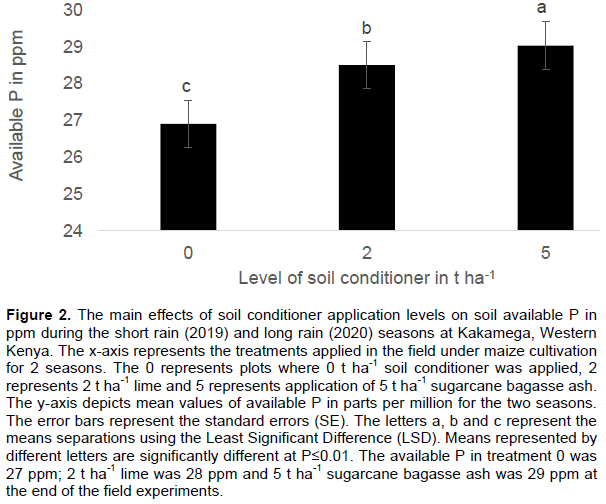 Significant increases in soil available P with sole application of decomposed cattle manure and SBA can be attributed partly to dissolution of the precipitated soil P with rise in soil pH. Huotari et al. (2015) reported that as the soil pH approaches 5.5 to near neutral, the precipitated  P  in  soils  occurring  in  pH    below  5.5   is released and hence becomes available. Additionally, both manure and SBA had adequate total P; 0.31 and 0.37%, respectively which improved the soil available P pool. This study found that application of manure at the rate 5 t ha-1 caused highest soil available P improvements followed by 10 t ha-1 and lastly no amendment. This could be possible because higher quantities of manure would require more time for mineralization to take place and nutrients to be released. This is in contrast with the findings of Lemanowicz et al. (2014) who found that the amount of available P in soil increased with increase in the amount of organic fertilizers (manure and slurry) applied. Bagasse ash significantly increased available P compared to liming and no amendment application. This agrees with findings by Hale et al. (2020) who reported that ash increased soil available P more than biochar, inorganic fertilizers and treatments with no amendment. Although the average available P was increased from 25 to 29 ppm, it is slightly above the adequate range. Results show that the main effect of season was significant at P≤0.01. The CEC was higher at the end of the 2nd season as shown in Figure 3. 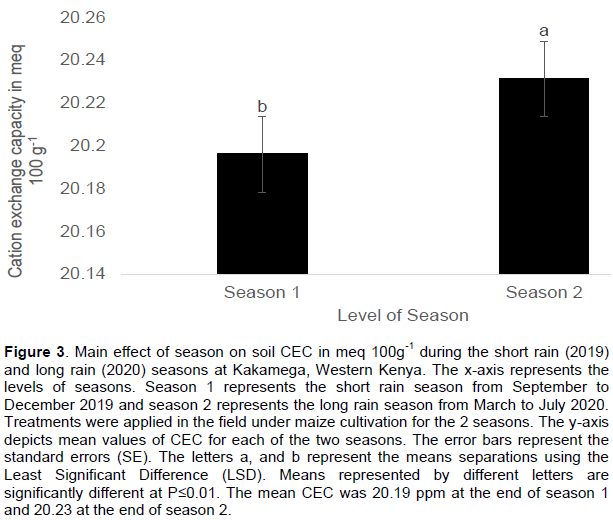 The main effect of manure on soil cation exchange capacities was significant (P≤0.01). The CEC was highest at the highest rate of decomposed cattle manure applied. Treatments with no manure and 5 t ha-1 manure, had the lowest values (Figure 4). The main effect of soil conditioner on soil cation exchange capacities was significant  (P≤0.01). Significantly   higher  CEC   resulted from the application of bagasse ash. There was no significant difference in soil CEC values between the application of lime and nil application of any amendment (Figure 5). 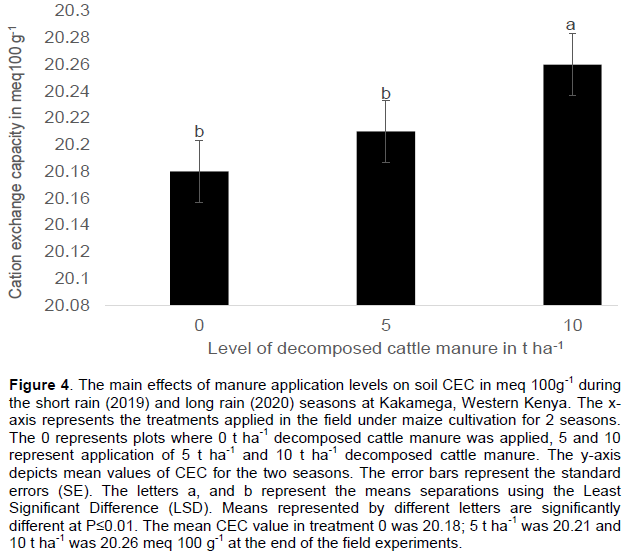 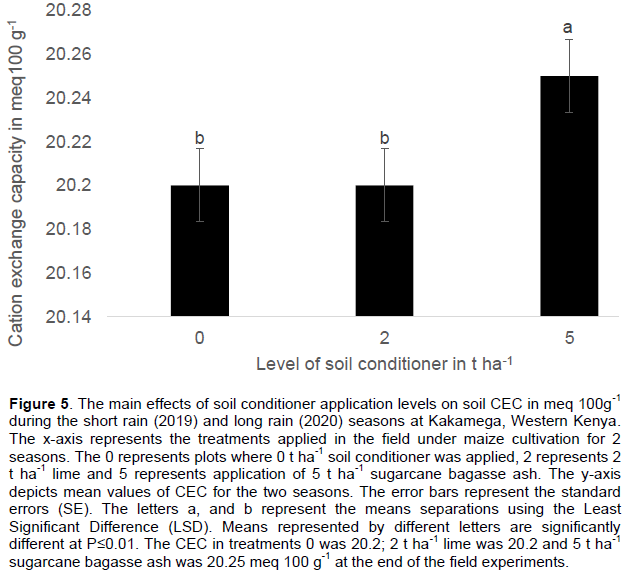 The CEC of soil increased due to application of decomposed cattle manure at high rate (10 t ha-1). Manure adds organic matter to soil and releases basic cations into the soil solution over time. Changes in CEC were not visible during the first season but increases were observed during the second season. The decomposed cattle manure and ash had been reapplied at the planting of second season. Despite CEC being an inherent soil property, it is highly influenced by the content of organic matter of a soil (FAO and ITP, 2015). This implies that soils with low organic matter content are likely to have low CEC as seen in the highly weathered soils like the Acrisols and Ferralsols and can be improved by increasing the organic matter content. Ingerslev et al. (2014) similarly reported that soil CEC and base saturation significantly increased in plots treated with ash, as a result of increase of magnesium and calcium ions at 10- 75 cm soil depth.

The authors thank the Centre of Excellence in Sustainable Agriculture and Agribusiness Management (CESAAM) Egerton, for funding this research project. Thanks to the management of National Agriculture and Research Laboratories, Nairobi of the Kenya Agricultural, Livestock and Research Organisation (KALRO)  for  the opportunity to do analyses of all the samples in their laboratory. Finally sincere thanks to Mr Dominic Fredrick a farmer from Kakamega County for availing his farmland for the experimental trials.