This study was carried out to determine which system of milkings and sampling methodology presenting chemical composition results safer and lower variation of the results. In Properties I and II, the fresh milk samples were collected in 40 ml flasks containing bronopol in order to compare the chemical composition of the milk, as adopting two sample collection methods, that is two and three milkings. In order to compare the chemical composition of milk and SCC, between two sampling methodologies, in two daily milkings (Property I) and three daily milkings (Property II), fresh milk samples were collected randomly totaling 300 samples on the property I and 312 samples on the property II. The milk chemical components were determined through analytical principle that is based on differential absorption of infrared waves by components of the milk. By analyzing the treatments, experimental design was used entirely randomized and averages were compared by Tukey test using the statistical program SISVAR (statistical analysis system). When evaluating the data obtained through variation coefficient (VC), the occurrence of experimental was observed, since most results showed low variation. However the distinct procedures for sampling of the fresh milk may present varied levels of the chemical composition and SCC, therefore overestimating or underestimating the values of the milk composition, when samples are collected at different times of the day and different number of milkings.

The samples of the fresh milk collected for analyses of the chemical composition and somatic cell count (SCC) may suffer various kinds of changes before arriving at laboratory, since the collection method, time, storage temperature, transportation and the milk homogenization for complete dissolution of the preservative may cause component changes.
The most common factors for variation of the milk components are: the animal individuality, breed, feed, lactation stage, age, environmental temperature, season, physiological factors (pregnancy, estrous cycle) and pathological ones (mastitis), persistency of lactation, cow size, cow mammary quarters, milking portion and interval between milkings (Weiss et al., 2002 ; Rangel et al., 2009). Although different factors may affect the composition of the milk, it is very important to repair the errors and to avoid any adulteration that may occur at the time of collection. The detection of the critical points that affect the quality and production of the milk is very important in controlling the herd.
In order to maintain the legitimacy of the samples in obtainment of the milk, they should be standardized, since the influence from milking type (mechanical or manual) and the method used to obtain the sample can alter the outcome of the chemical composition of milk (Reis et al., 2007). Taking into account some criteria such as the interval between milkings and the method for collecting milk samples in order to perform laboratorial analyses, it is possible to observe the occurrence of variation in composition of the milk  (Cabral et al., 2013). According to Friggens et al. (2001), the milk component presenting more variability is fat, whereas protein and lactose do not differ according to criteria under evaluation. Therefore, only a single sample of milk is sufficient to obtain reliable results, when those variables are under evaluation.
When evaluating the quality of the milk, as taking into account some criteria such as fractioned collection of the milk sample in automatic milking systems, a high interference degree is observed in some milk components (Nielsen et al., 2005). However, the management practices adopted in rural properties and the milking type should be taken into account.
It is possible to assert the occurrence of variation in some components of the milk, according to the method used in obtaining the milk sample, the milking type adopted in the property, whether manual or mechanical, and the interval of eight or twelve hours between milkings.
In this context, this study was carried out to determine if two distinct procedures in collecting milk samples, such as pool of sample and independent samples, interfere with the chemical composition and somatic cell count of the fresh milk. If different number of milkings occasion variation in the chemical composition of the milk, when samples are collected at different times of the day, and which sampling method provides security for laboratorial analyses.

The average results of the chemical composition and somatic cell count (SCC) of the milk samples collected under different sampling and number of daily milkings are presented in Tables 1 and 2.  According to the obtained data and the evaluation of the variation coefficient (VC), the experimental accuracy was confirmed, since 50% from the total results showed low variation, as demonstrating the variables that showed greater instability in Property I were the production of milk, fat and somatic cell count (SCC) with VC corresponding to 28.45, 23.76 and 22.89% respectively (Table 1) whereas, in Property II, the variables with greater variation were fat and SCC with VC corresponding to  31.84% and 24.40% respectively (Table 2), whereas the ideal VC to animals is lower than 20%.
During the experimental period, the milk production (milk kg/milking) of the highly productive cows, within the range of two and three milkings, showed average results with (P<0.05) difference (Tables 1 and 2).
In Property I, the daily milk production representing the average pool showed the highest value, as differing (P<0.05) from morning and afternoon milkings that did not differ from each other at (P<0.05) significant level. In the morning, the milk volume was numerically higher than afternoon milking. This difference occurred because the pool average results from the daily average production of milk (Reis et al., 2007)  (Table 1). 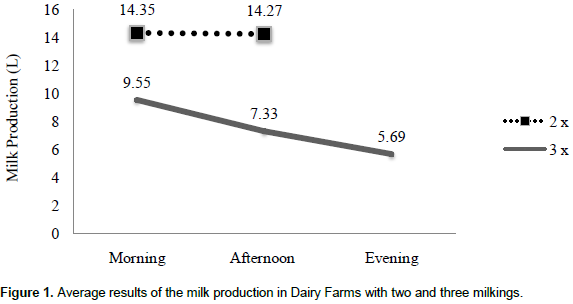 Different results were observed by Marnet and Komara (2008), when evaluating the amount of milking performed daily and the profitability. They observed the system of milking only once a day in order to save time and flexibility to be not the best for cows, since only one daily milking causes greater impact upon physiology of the udders and udder health, therefore limiting the use of this system. Table 3 shows the results from simple correlation among variables of the chemical composition in dairy systems with two and three milkings.

The distinct procedures for sampling of the fresh milk may present varied levels of the chemical composition and SCC, therefore overestimating or underestimating the values of the milk composition, when samples are collected at different times of the day and different number of milkings.
So, the pool sample collection would be the procedure indicated, since the result for composition presents a daily relative average, therefore a homogenous and legitimate result. The sampling for issuing reports concerning to milk quality should be judiciously performed in order to representatively express the average values of the milk chemical constituents.

The Fapeg, Capes and CNPq for financial support for research.