Cultivation system is one of the main parameters inherent to soil water dynamics. Studies indicate that in soil conservation systems, such as no-tillage and crop-livestock integration, soil quality is maintained and even improved due to higher input of organic matter and straw kept on the soil surface. Thereby, the aim of this study was to analyze the influence of the spatial variation of maize straw and organic matter content on soil moisture of an Oxisol at the municipality of Jataí, southwest of Goiás. Nine soil-sampling points were used in 1 ha, allocated to three different types of soil management (No-Tillage, Crop-Livestock Integration and Conventional Tillage). For the study of organic matter, soil samples were collected in nine points and three depths (0 to 0.12 m, 0.12 to 0.24 m and 0.24 to 0.36 m) for each point. The dry mass of straw was determined by a stove at 65°C, after sampling in the area using a circle with internal area of 1.0 m², released randomly near the sampling point. Soil moisture was determined immediately after straw sampling at the same site, using a time domain reflectometry sensor. The results indicated good distribution of straw on both systems, but there was no correlation between straw and soil moisture. The organic matter content was highly correlated with soil moisture, especially in No-Tillage and Crop-Livestock Integration systems. The authors recommend the increase of organic matter of the soils for better maintenance of soil moisture.

Organic matter has been identified as a primary indicator of soil quality, since it acts directly and indirectly on the physical, chemical and biological attributes of the soil and on the plants (Doran, 2002; Payan et al., 2007). The straw deposited on the soil surface has also influenced these characteristics. During the whole development of the plant, it absorbs water and loses using the ground as a reservoir of water and nutrients. The spatial and temporal distribution of climate, the variety of culture and management of the agricultural system, modify the physical properties of the soil, which is directly related to storage of water (the main factor determining the productivity of crops), so, the amount of water consumed by a crop during its development varies with them (Moreti et al., 2007). Carvalho et al. (2004) mention that soil has higher variability in their attributes, both vertically and horizontally, resulting from the interaction of the processes that govern the factors of their formation. Knowledge of the distribution of physical water soil attributes becomes a basic requirement when seeking to establish appropriate management practices for soil and crops, for failure to comply with these concepts will result in errors in sampling and soil management. This stems from the large spatial variation of soil attributes and meaning and direction of water flows (Iqbal et al., 2005). Thus, it is observed that the cultivation system is one of the main parameters inherent in the dynamics of water in the soil. Therefore, several studies indicate that in conservation system, as no-tillage (NT) and crop-livestock integration (CLI), soil quality is maintained and/or even improved by greater input of organic matter, due to the straw kept on the soil surface (Tormena et al., 1998; Oliveira et al., 2004; Farinelli et al., 2006; Fontana et al., 2006; Salton et al., 2008; Carneiro et al., 2009). Knowing the shape and magnitude of the changes in soil physical-water properties allows a better understanding of the relationships between the different management systems and the evaluation of their effects on associated processes, allowing the adjustment of indexes and generated models, for example in PC, adapting them to other types of management systems (Dalmago et al., 2009). In this sense, the aim of this work was to analyze the influence of the spatial variation of maize straw and organic matter content on moisture of an Oxisol.

The experiment was carried out in open field at the Federal University of Goiás (UFG), Regional Jataí, in the southwest of the State of Goiás - Brazil (Figure 1), in a Savanah region. The location has 17° 52 '53 "S of latitude and 51° 42' 52" W of longitude, with 700 m of altitude, located in a climatic region type Cw, tropical savanna, mesothermal, with well-defined dry and rainy season, according to Kopen rating. The average annual rainfall varies around 1600 mm (Koetz et al. 2010). The studied soil was classified as a typical dystrophic red Oxisol, according to the classification of EMBRAPA (2013). 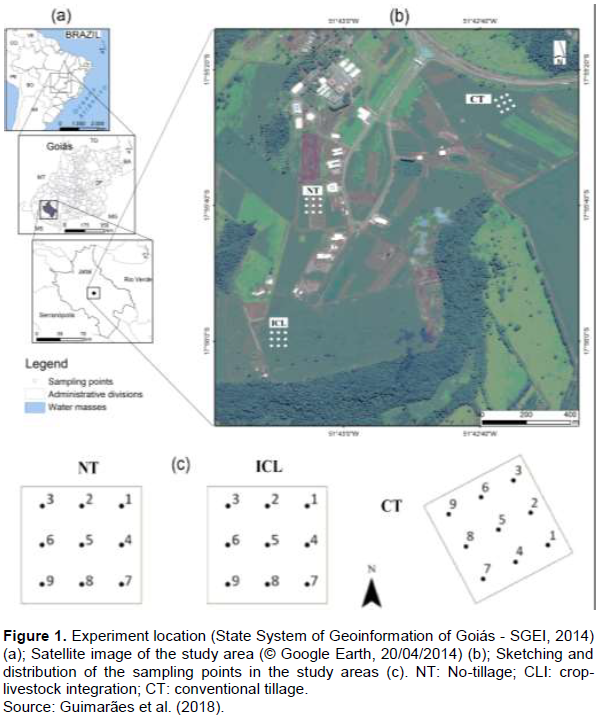 The   experimental   area   was    composed  of  three  subareas   of approximately 1 ha each, cultivated with soybean (Glycine max) in the first cultivation after the raining period began (season), with different soil management systems (Figure 1, b and c).

The subareas have been cultivated over the years with soybean in the first cultivation (season) and maize (Zea mays) or sorghum (Sorghum bicolor) in the second (off-season). Since the year 2008 for no-tillage (NT) (subarea 1), consorting soybean crops and pasture since 2009, for crop-livestock integration system (CLI) (subarea 2) and associated with the use of harrowing at the time of planting for conventional tillage (CT). Each subarea was divided into a regular grid containing nine cells measuring 30 × 30 m each (Figure 1, b, and c) considering the center of each cell as the reference point for sampling, similar to Andriotti (2013).

The determination and location of points for data collection was done by geo-reference, using a GPS system ("Global Positioning System"), GARMIN, MAP785 model.

On predetermined points, the maize straw was collected (crop residues deposited on the soil surface) using a circle with internal area of 1.0 m², released randomly near the sampling point, and dried in a forced ventilation stove at 65°C until constant mass (dry mass). Monitoring of soil moisture was done immediately after sampling the straw at each point. Moisture data were collected on nine points on each soil management system (NT, CLI and CT) at depths from 0 to 0.12, from 0.12 to 0.24 and 0.24 to 0.36 m, with instantaneous readings every 14 days, by means of an equipment type time domain reflectometry (TDR).

At the same nine sample points, deformed soil samples were collected to determine pH, percentage of organic matter (SOM), clay, silt and sand, and also undisturbed soil samples with the aid of metal cylinders (0.05 m high and 0.05 m in diameter)  to estimate bulk density (g cm-3), similar to Ferreira et al. (2003) and following recommendations of EMBRAPA (2011). For all sampling, four repetitions were made, collected randomly within a radius of 1 m from the reference point (center of each one of the nine cells measuring).

For calibration of the TDR sensor, a methodology similar to Abbas et al. (2011) simultaneously with sensor monitoring, 270 deformed soil samples were collected in five of the nine points of each management system, with 4 replicates per point (20 replicates per analyzed depth) were collected randomly within a radius of 1 m from the point, at three depths.

The study was conducted in an atypical year in which the rainy season began a little later than normal. Thus, the collections occurred between November 19, 2013 (end of the dry period of 2013) and January 15, 2014 (during the rainy season), which made it possible to obtain greater soil moisture variation due to greater variability between the months analyzed. These soil samples, duly collected and packed in hermetically sealed plastic bags, were then transported to the soil laboratory of the UFG, where the gravimetric moisture was determined by the stove method and subsequently converted to volumetric moisture (θ) using the density of the soil.

Soil characteristics were analyzed by the analysis of variance (ANOVA) and test Scott-Knott at 5% of probability (α = 0.05). The topography was analyzed using altimetric dimensions got from the GPS system previously mentioned and the data were worked on the SURFER® software for three-dimensional representation.

Spatial distribution of soil organic matter and straw  were  studied on SURFER® software and the results showed by two-dimensional representation.

The correlation between soil moisture and variables investigated by the coefficient of Pearson, for the three types of management in different soil depths was also done similar to Gao and Shao (2012).

Area characteristics Although Schneider et al. (2008) mention that the continuing existence of the pattern of the water content in the soil can be influenced by the topography, the relief of the areas used in the study (the gently rolling plan) significantly reduces the interference of relief in the spatiotemporal pattern of moisture soil in these areas and significantly reduces the influence of the topography in the temporal analysis of soil moisture (Figure 2).

As the topography, vegetation also had little influence in the comparative analysis of soil moisture between the three types of soil management (NT, CLI and CT), since the plantation was carried out with the same crop (soybean) and on the same date for both.

Although  the  low  CV  values  found  for  soil attributes suggest reduced heterogeneity around the mean (Cruz et al., 2012), statistical difference between the meanings of soil characteristics was noted.

This heterogeneity may have occurred for different reasons, with the soil genesis and the slope that influences the distribution of the soil particles due to the drag (Bertoni and Lombardi Neto, 2008), but low slope of the studied area points to the genesis of soil as the main cause of this heterogeneity, associated with different cropping systems with their specific characteristics.

Different organic matter values were observed by analysis of variance (Table 1), but with a tendency to lower values with increasing the  depth  in  all  treatments (Table 1). This observation demonstrated a typical profile of soils in general, since the deposition of dry matter concentrated on the soil surface. The reduction of soil organic matter values was observed with soil depth, represented by gradually changing color pattern as shown in Figure 3; the lighter in the superficial layers to darker shades in deeper layers.

Difference was observed in spatial distribution of dry mass for maize straw between No-Tillage and Crop-Livestock Integration systems: higher values (lighter color) were concentrated at the ends on first system and they were concentrated in the central area on the second (Figure 4).  These  results  corroborate  some  works  that affirm the use of the soil in agricultural crops introduces new sources of heterogeneity. Among them is the irregular distribution of crop residues (Gomez and Gomez, 1984; Steel and Torri, 1997).

Considering average values of the moisture to all the campaigns, a variation between 22 and 41% is shown in Table 2, with a maximum value close to the field capacity (43%) determined by Koetz et al. (2010) in previous work in the same area of the experiment. The temporal profile was similar between the three systems, with highlights for NT and CLI, which were similar for the three depths, especially in relation to the more superficial layer that presented higher values than the other depths in both systems and in all campaigns. 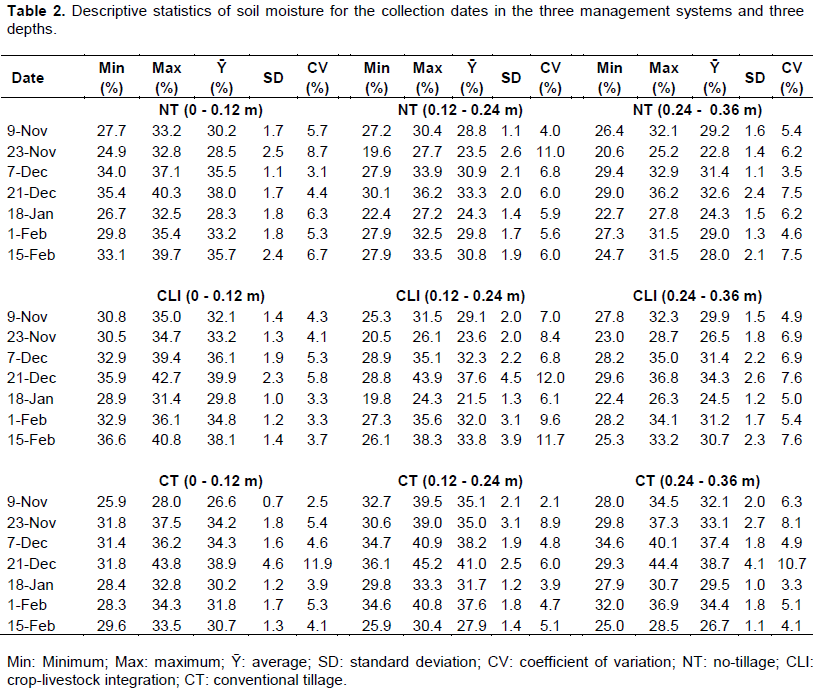 This similarity between the systems was probably because they were very close to each other: approximately 500 m from NT to CLI and 800 m from NT to CT (Figure 1). Especially between NT and CLI, in addition to similar soil management, little soil rotation and high deposition of dry mass of the corn straw on the soil surface, preventing evaporation of the water.

Similar to Gao and Shao (2012), the correlation coefficient  of   "Pearson"   was   used   to    examine   the dependence of the water content in the soil (WCS) in relation to the soil properties to NT, CLI and CT at three different depths (Table 3).

The authors recommend the increase of organic matter of the soils for better maintenance of soil moisture.

Future researches that compared other variables, such as soil density and texture, are encouraged by the authors and may provide different conclusions from those of this study.

The authors thank Coordination for the Improvement of Higher Level Personnel (CAPES) for financial support and the Postgraduate Program in Agronomy of the Federal University of Jataí for technical and scientific support.