This Research work was conducted to study the effects of mycorhizal fungal inoculation on seed germination and plant growth of Bambara groundnut (Vigna subterranea). The impacts of Glomus mosseae, Aspergillus niger, Aspergillus fumigatus and Malbranchea gypsea on some plant growth parameters were studied both in their crude and pure forms. Compared to un-inoculated plants, the fungal strains significantly increased plant growth parameters. The highest rate of germination at the 42nd day was observed in the crude fungal inoculation treatments and specifically in A. fumigatus crude inoculation as it increased the number of leaves, leaf length, leaf surface area, stem girth, and number of shoots by 54.2, 23.8, 49.1, 20.0 and 40.0%, respectively.
Key words: Mycorrhizal, Vigna subterranea, crude and pure forms, plant growth parameters.

In most of the Sub-Sahara African countries, increased population growth leads to hunger, the main cause of malnutrition and food insecurity. This food insecurity relies on low crop productivity, limited by low soil fertility which is accelerated by low soil cation exchange capacity and organic matter, high soil acidity and/or bad cultural practices (Bado, 2002; Yao et al., 2005). All these constraints create disequilibrium between the available quantity of crops produced and the population needs on one hand, and the environment on the other, suggesting that this population is not eating or living safely (Cooke, 1998).
In an effort to enhance crop production, most of our tropical countries rely on chemical fertilizers, which  have
potentially revealed to be a pollutant to human life and environment (Margni et al., 2002), in addition to their high cost, as the result of lack of own available chemical fertilizer manufacturers.
The lack of food rich in proteins in the world and particularly in developing countries has urged researchers to seek for alternative source of proteins to complete their diet (Ahmed and Abdallah, 2010). Hence, the food insecurity, the environmental pollution and the soil fertility problems need to be solved if promotion of biological and sustainable agriculture is to be accomplished through measures such as improved fallow, intercropping, agroforestry or biofertilizers. Among these    strategies,   biofertilizers   have    been    reported to increase yield of several crops in Cameroon (Megueni et al., 2006; Ngakou, 2007; Ngakou et al., 2007a, 2008, 2011). Unlike other crop legumes, very little is known about Mycorhiza-Vigna subterranea interactions.
Bambara groundnut belongs to the under-utilized grain legumes that possess high crude protein content between 22 and 37% (Adeparusi, 2001; Fasoyiro et al., 2004). It is widely grown in Nigeria and in other African countries like Ghana, Cameroon, Ivory Coast and Togo (Klu et al., 2001). Bambara groundnut is the third most important legume after groundnut (Arachis hypogaea) and cowpea (Vigna unguiculata) (Howell et al., 1994). Hence, there is a need to improve the productivity of this food security crop known to grow on low soil fertility, where it can withstand drought and low rainfall (Berchie et al., 2010).
Therefore, we hypothesize that Mycorhiza symbiosis could alleviate the host plant nutrient requirements, thus resulting to sustainable yield improvement of this valuable crop, so as to substitute chemical fertilizers. 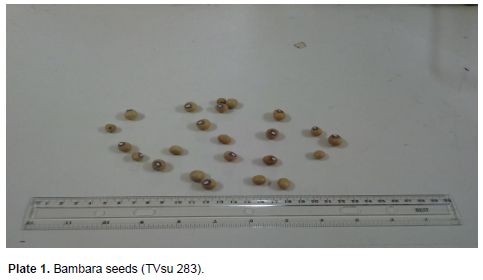 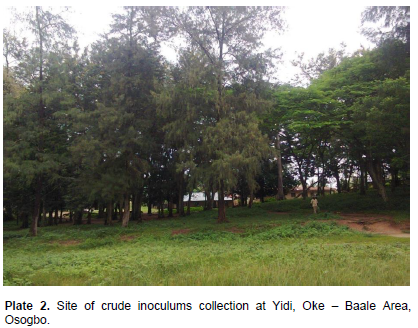 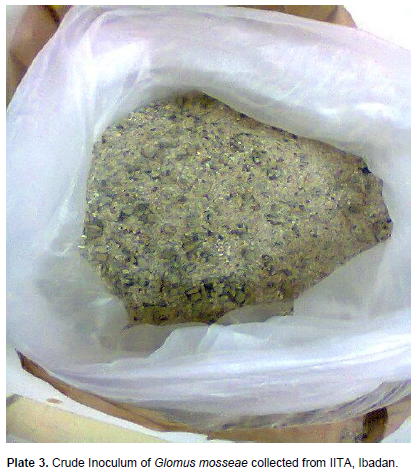 Wet and dry weights of roots and shoots
While the wet weights of shoots and roots were measured directly, dry weights were measured after cleaning, rinsing in distilled water and drying for 24 h in an oven at 70°C (Jha and Saraf, 2011). Measurements were taken in gram (g) using weighing balance.
Plant height
The plant was straightened to its fullest length and the length (cm) was measured with a ruler alongside (Harold, 1957).
Number of leaves
Only true leaves were measured and considered as the correct number of leaves (Table 1). 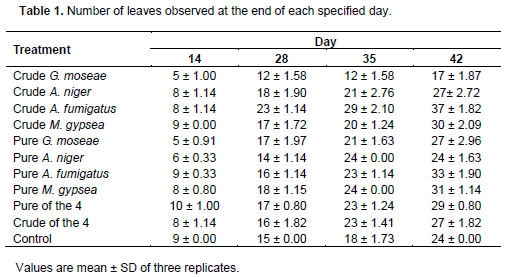 After sowing, germination occurred 1 week later in all the treatments. This was within the range of 7 to 15 days (Swanevelder, 1998), or 7 to 10 days (Yao et al., 2005) period reported as necessary for germination of Bambara groundnut.
A recent report by Brink et al. (2006) indicated that flowering in Bambara occurs within 30 to 55 days after sowing. This observation and the findings from this research are different from those made by Ocran et al. (1998) that Bambara groundnut flowers within 43 days, while Berchie et al. (2010) revealed date to 50% flowering at between 39 and 41 DAP. The results of this research suggest that dates to 50% flowering for Bambara groundnut significantly vary with the seed variety and the growing area, because after 6 weeks of planting, the Bambara seeds (TVsu283) did not flower.
It was observed at the end of the growing period and from the results of the measured parameters (among many others) that the growth of the Bambara groundnut was more enhanced by the crude mycorrhizal inoculations. Crude A. fumigatus increased number of leaves by 54.2% as compared to the non-mycorrhizal treatments (Table 1). This is followed by pure A. fumigatus with 37.5% increase, then pure M. gypsea with 29.2%, crude M. gypsea with 25.0% increases respectively. Next is that of the pure inoculations of the four fungi having 20.8% increase. Following closely are those of the crude inoculations of the four fungi, crude A. niger and pure G. mosseae all with 12.5% increase. There was no increase in the number of leaves produced by pure A. niger as compared to the non-mycorrhizal treatments. Crude G. mosseae had a lower number of leaves than the non-mycorrhizal treatments.A. fumigatus is more effective than the other fungal inoculums because it has been recorded that A. fumigatus has an early duplication cycle compared to other filamentous fungi (Michelle and Ian, 2000). Thus more strains of it are available for the Bambara seed to increase its yield and productivity.
The lower yield in the treatments with the four fungal strains is linked to the fungi acting antagonistically. The highest stem length was found in crude A. niger with leaf length of 1.9±0.59 cm (Table 2). Crude A. fumigatus and pure A. fumigatus had the same leaf lengths of 1.7±0.25 cm and 1.7±0.68 cm respectively. Crude M. gypsea and pure A. niger also had the same leaf lengths of 1.6±0.22 cm and 1.6±0.36 cm respectively, then pure M. gypsea having leaf length of 1.4±0.45 cm. The same leaf length was observed in pure G. mosseae, pure inoculations of the four fungi, crude inoculations of the four fungi and control with leaf lengths of 1.3±0.18, 1.3±0.15, 1.3±0.25 and 1.3±0.27 cm respectively; the least being crude G. mosseae with leaf lengths of 1.2±0.50 cm. 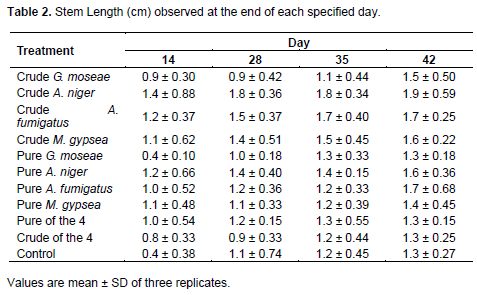 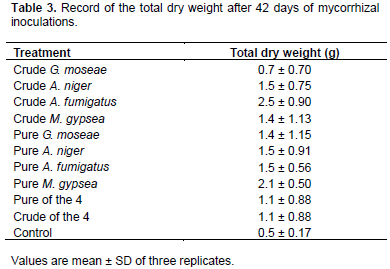 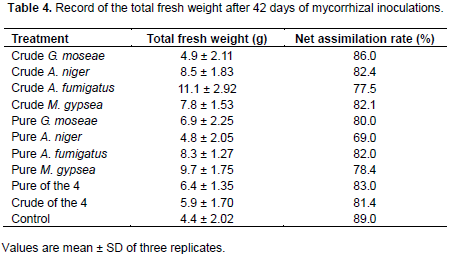 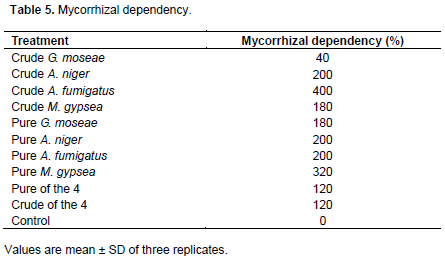 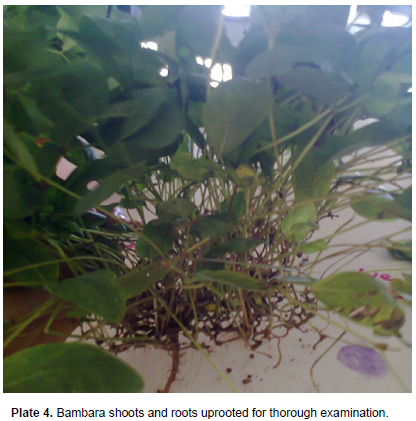 In conclusion, mycorrhiza improved the plant biomass as compared to un-inoculated treatment. Biofertilizers could thus be recommended to boost the crop productivity and alleviate the long cooking properties of V. subterranea seeds. The overall improvement in seedling vigor through a significant increase in various physiological parameters suggests that these fungal strains have a plant-growth promoting ability on Bambara seedlings and hence could be used for seed inoculation for better establishment of seedlings. The plants with enhanced seedling vigour can assist to better plantations. Thus it can be concluded that the use of Bioinoculants or Biofertilizers in agricultural practices may assist to enhance food production.
Improvement of soil fertility and promotion of sustainable agriculture in Osun region is feasible if under-utilized crops such as Bambara groundnut (Vigna subterranea) could be inoculated by mycorhizal strains in the field. It is therefore recommended that the results obtained from this research work be forwarded to extension officers in the Ministry of Agriculture and Rural development to tackle problems of seed germination and seedling establishment of this legume with enormous benefits.

We are thankful to the International Institute of Tropical Agriculture (IITA) for the supply of the Bambara seeds used for this study. We also appreciate all the staff members of the Microbiology Laboratory, Department of Biological Sciences, Osun State University, Osogbo, for their support.