Chickpea Fusarium wilt caused by Fusarium oxysporum f. sp ciceris is a devastating disease of chickpea in Ethiopia. This study was done to evaluate the resistance of the improved chickpea varieties to fusarium wilt disease. About nine kabuli and ten desi types including one JG-62 differential were evaluated in RCBD Design with three replications in Debre Zeit sick plot in 2017. Results of the study showed that there are significant differences in reaction to fusarium wilt disease in both main and off-seasons. In main season, four kabuli chickpea varieties were susceptible and five were moderately resistant to wilt/root rot. The highest incidence (99.06%) was found in JG-62 differential followed by variety Yelbe (70.54%). In compression, three varieties were moderately resistant in off-season. Some of the promising varieties had lowest incidence of 13.92% followed by 16.39%. Fusarium wilt incidence was higher in main season than off-season. This is due to soil temperature and soil moisture is the indicator of variation in response to the same varieties. The majority of the varieties were specific adaptation and race specific resistance that break their source of resistance. Therefore, high genotypes released through phenotyping in pipeline at different fusarium wilt affected areas will be advisable. The reaction of variety or genotypes versus race using differential line under sick plot will be recommendable for non-races specific resistance source.

Chickpea is attacked by a number of soil-borne and foliar diseases as well as ï¬eld and storage insect pests. Among the soil-borne diseases Fusarium wilt (Fusarium oxysporum f. sp ciceris) is one of the most important root diseases affecting chickpea and wide spread in chickpea growing areas such as Asia, Africa and Southern Europe, where the chickpea-growing season is dry and warm (Meki et al., 2008; Sharma and Muehlbauer, 2007; Rafael et al., 2015). It is widely distributed and has been reported from at least 33 countries (Singh and Sharma, 2002; Dubey et al., 2007). The average yield reduction of chickpea due to Fusarium wilt globally  varies  from  10 to 15% and can reach as high as 100% in some countries (Navas-Cortes et al., 2000; Sharma et al., 2005). Early wilting is reported to cause 77-94% yield loss (Haware and Nene, 1980). In Ethiopia, about 30% yield loss of chickpea due to chickpea wilt has been reported (Meki et al., 2008).

It is one of the major soil or seed borne disease of chickpea worldwide (Jalali and Chand, 1992). However, evolution of new races poses a serious threat to deployment of wilt resistance in chickpea. Wilt is more severe on sandy soil and less severe on clay loam soil. The pathogen appears to be highly variable (Jimenez-Diaz et al., 1993). Considering the nature of damage and survival ability of the fungus, management of the disease is difficult either through crop rotation or application of fungicides. Host plant resistance is an approach that gives systemic protection in crop plants for pest and diseases. The most practical and cost-efficient method for management of chickpea wilt is the use of resistant varieties (Bakhsh et al., 2007; Karuppaiah et al., 2013). Developing and releasing wilt/root rot-resistant cultivars is the major objective of the national chickpea improvement programme and chickpea varieties having resistance to wilt/root rot have been released for cultivation in Ethiopia (Geletu et al., 1996).

Majority of both kabuli and desi type of chickpea varieties had no wide adaptability to abiotic and biotic stress such as soil borne diseases that is wilt/root rot, dry/root rot and collar/root rot. Even the resistant varieties become susceptible as they break their source of resistance due to pathogenic variability and race specific reaction. Therefore, it is critical to evaluate their level of resistance and source for selection as breeding source of materials for essential trait and their inheritance resistance nature.

Field experiment was conducted at Debre Zeit Agricultural Research Center in main and off-seasons irrigation based in 2017 cropping season. They were well established sick plot for wilt/root rot screening. Debre Zeit is located at latitude 8°44’ N, longitude 38°58’ E, altitude of 1900 m above sea level. It receives average annual rainfall of about 851 mm and the mean annual temperature of 28.3 and 8.9°C (maximum and minimum respectively); the soil type is black (verti sol) and is 47 Km away from South- east of Addis Ababa.

A total of 19 varieties released (10 desi types and 9 kabuli chickpea varieties) were used in the study. JG-62 was used as differential check. The evaluation materials were obtained from Debre Zeit, Sirnka and Debre Berhan Agricultural Research Center in 2017 main and off cropping season (furrow irrigation based). The experiment was laid out as a randomized complete block design (RCBD) with three replications. The plot sizes were 4.0 m × 1.20 m.

Seeds were planted in 30 cm × 10 cm between rows and seeds respectively.

Appearance of the disease in the experimental plots was recorded starting from disease onset from the given whole plot on susceptible check death.

Data on disease incidence were subjected to analysis of variance (ANOVA) using R statistics with General Linear Model. Mean separation was based on the LSD at the 5% probability level.

The reaction of genotypes to fusarium wilt is presented in Table 1. The data revealed variation among chickpea varieties for Fusarium wilt disease resistance. There was highly significant difference in varieties (P<0.001)’s reaction Fusarium wilt in both main and off-seasons. Out of the nine chickpea varieties, four varieties (Yelbe, Arerti, Acos dubie and DZ-10-4) were susceptible whereas, five varieties (Habru, Shasho, Teji, Ejere and Chefe) were moderately resistant to Fusarium wilt. The highest incidence (99.06%) was in JG-62 differential followed by 70.54% in Yelbe and lowest incidence (26.5%) in Chefe variety. Meki et al. (2008) reported that out of the eight improved chickpea varieties released for cultivation in Ethiopia since 1970 only two varieties, namely DZ-10-4 and Arerti are kabuli types; they proved resistant in Debre Zeit sick plot which disagrees with our finding that both are susceptible to wilt/root rot. 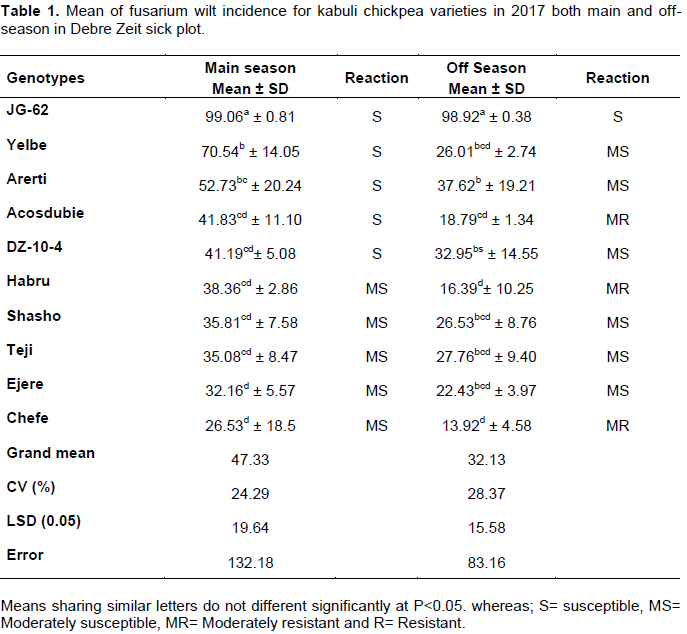 Compared to the seasonal impact of disease severity, off-season six chickpea kabuli (Yelbe, Arerti, DZ-10-4, Shasho, Teji and Ejere) were moderately susceptible and three (Acos dubie, Habru and Chefe) were moderately resistant. The highest incidence (98.92%) was in JG-62 differential and lowest incidence (13.9%) was recorded in Chefe. The Fusarium wilt intensity was higher in main season compared to off season. Overall, three varieties, Shasho, Teji and Ejere with consistent reaction of improved chickpea both in main and off-season were moderately  susceptible. Chaudhry et al. (2007) screened 196 chickpea germplasm lines/cultivars for resistance to fusarium wilt disease in a wilt sick plot. None of the test line was found immune or highly resistant. These findings are quite in conformity with our results. The pathogen is highly variable in their nature. Iqbal et al. (2005) also report the sources of resistance to Fusarium wilt in chickpea germplasm originating from national and international research institutes. Delay in sowing can also help to escape disease from such severely affected areas. On the other hand, the varieties that showed resistance or tolerance are most suitable for exploitation in breeding programs or for direct sowing in wilt prone areas. This is concurrent with findings of Karimi et al. (2012). There was indication of season difference in kabuli type of chickpea varieties for their resistance to wilt/root rot. The reaction of genotypes is also influenced by various factors like soil temperature, soil moisture and depth of planting. High soil moisture and optimum soil temperature in main season account for high wilt/root rot incidence. Low level of soil moisture reduces plants mortality at 20°C (Sinha, 1973; Chi and  Hanson, 1964). Increased percentage of infected plants, at reproductive compared to seedlings stage is due to increasing temperature (Haware et al., 1992; Mirzapour et al., 2014). It is also related to depth planting; seasonal difference of planting of seeds at proper depth (10-12cm) can reduce the disease incidence in off season (Singh and Sandhu, 1973), while shallow sown crop can be affected by the disease (Dahiya et al., 1988).

The interaction effects of main season by off season to Fusarium wilt revealed highly significant difference (P<0.001) in the genotypes. Three varieties (JG-62, Yelbe and Arerti) were susceptible and seven varieties (Acosdube, Shasho, Habru, Ejere, Teji and  Chefe)  were moderately susceptible during the seasons by variety. The highest incidence (98.99%) was recorded in JG-62 differential and lowest incidence (20.22%) was found in variety Chefe (Table 2).  There was an indication of the pathogenic variability and soil factors such as moisture, temperature and inoculum load effects across season. Almost all of the varieties range from moderately susceptible to susceptible to wilt/root rot in kabuli type of chickpea in the same sick plot.  Releasing one or two resistant varieties at a time and growing them in wider areas for long periods can cause new race development due to directional selection (Keller et al., 2000). Thus, it may be necessary to expand breeding work and increase varietal diversity to prevent development of new races through practicing diï¬€erent resistant gene management systems. 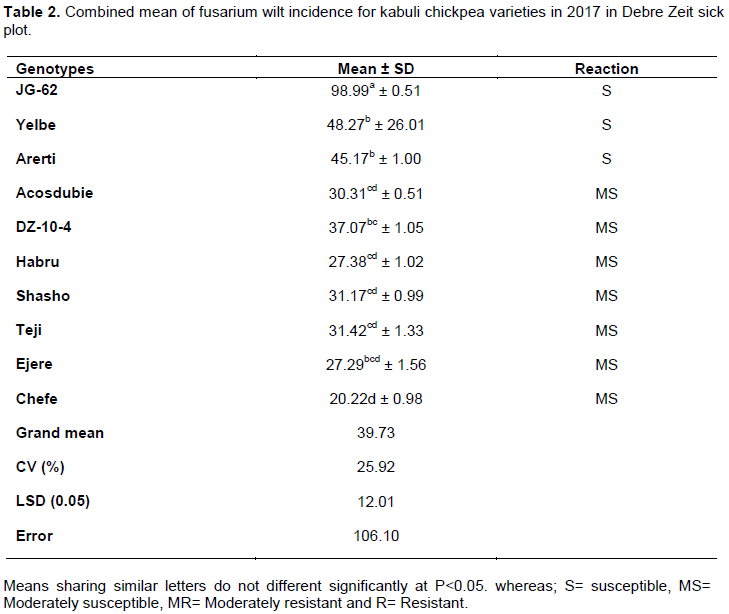 The present study results (Table 3) indicated that a highly significant effect (P<0.001) was noted against fusarium wilt in desi type of chickpea in main cropping season. Out of the ten desi types of chickpea one variety (Akaki) was susceptible and eight varieties (Worku, Natoli, DZ-10-11, Dalota, Teketay, Mariye, Mastewal and Dubie) were moderately susceptible in main season. Moreover, in off-season one variety was (Akaki) susceptible followed by five varieties (Worku, DZ-10-11, Dalota, Mastewal and Dubie) that were moderately susceptible and three varieties (Natoli, Tekatey and Minjar) that were moderately resistant and one variety (Mariye) that was resistant.  A comparison of the result of the present study with a similar work by Haware and Nene (1982) and by Dolar (1997) indicates the presence of similar variability in isolates of Fusarium oxyporum f. sp. ciceris among the three countries (Ethiopia, India and Turkey).  However,  the   susceptibility   of   some   of  the improved varieties indicates that the ‘wilt sickplot’ is perhaps dominated by a single race, and hence, the cultivars possibly escaped exposure to other virulent races (Meki et al., 2008). There are many sources with high resistance to Fusarium wilt available in desi type, while resistance sources in kabuli type are limited. The highest incidence (97.08%) was recorded in JG-62 differential and lowest (25.27%) was in the variety  Dubie. Where as, in off season the highest incidence (98.92%) was in JG-62 and least incidence (8.98%) was found in Mariye followed by variety Minjar (13.19%) (Table 4). 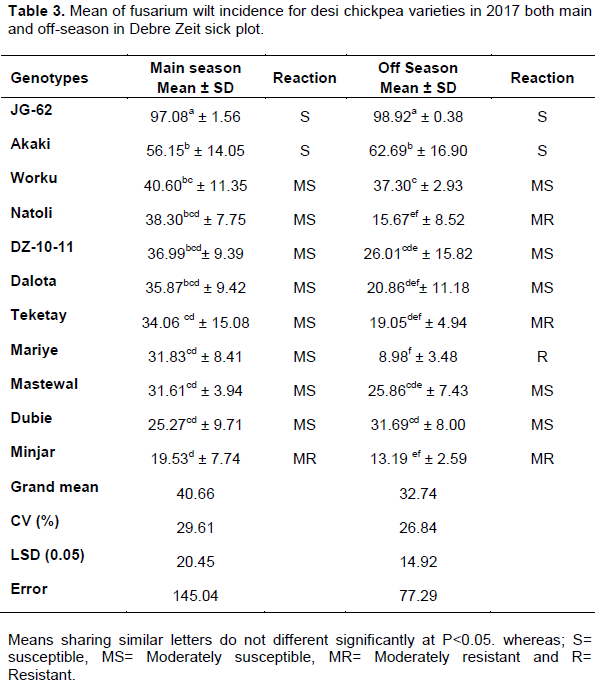 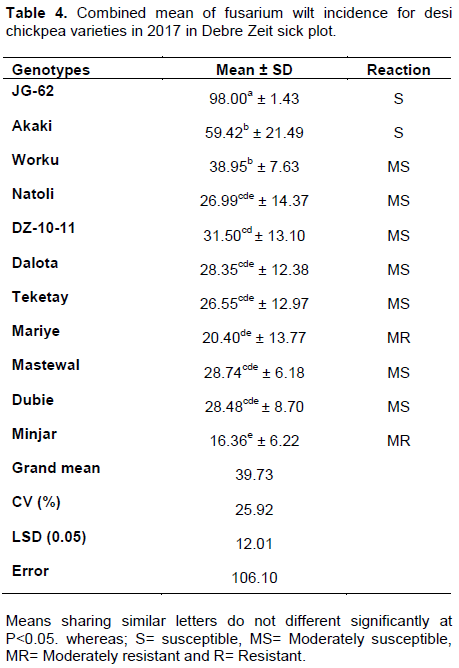 So  far    different    improved    chickpea   varieties   were released at national and regional level with the main focus on yield attribute. But, there are few varieties that are resistance to diseases. Chickpea yield potential was constrained due to fusarium wilt disease. With this gap it is critical to evaluate the performance of improved chickpea varieties for their resistance. Among the varieties majority were susceptible to moderately susceptible in both main and off-seasons; whereas, few varieties were moderately resistant in off-season. The varietal resistance level was not consistent based on seasons and variety. The dominant race in wilt sick plot indicates variety resistance was specific resistance. There were no highly resistant varieties of chickpea. This implies that fusarium wilt incidence was higher in main season than off-season cropping.  As preliminary study, this research contributes to visibility of wide range of race diversity and race specific resistance to improved varieties not evaluated for none-race specific before releasing at different testing location in chickpea growing areas. But, high  varieties through phenotyping with different races in major affected areas and additional sick plot by fusarium wilt and exploring source resistance for non-race specific varieties will be highly useful. Thus, screening for source resistance will be continued as chickpea materials have narrow genetic base for breeding materials and introgression from wild types of chickpea.