Africa is the second continent suffering from soil compaction; studies of this phenomenon must be multiplied in order to overcome this problem. Very few studies have been conducted in Tunisia to understand soil compaction, its causes and its effect on soil properties. The research was conducted on experimental field at the Higher Institute of Agronomy of Chott Mariam, Sousse, Tunisia. The main objective of this study was to evaluate the effect of different speed of tractor compaction on soil, that is, no compaction (C0), speed 1 (C2) = 4 km h-1, speed 2 (C3) = 9 km h-1 on the hydraulic and physical properties of a silt loam texture under three natural moisture conditions: H0, H1 (15 days later), and H2 (30 days later). Each test run was limited to one pass. Undisturbed soil cores were collected in the topsoil (0-10 cm), at 10-20 cm and in the subsoil (20-30 cm) below the trace of the wheel at site. Soil compaction level was determined by penetration resistance using a penetrologger. Bulk density was then determined to evaluate the impact of the two tractor frequency passages at the three moisture conditions on soil compaction. For initial soil (C0), bulk density was 1.38 Mg m-3. After the tractor pass, the highest degree of compaction was observed with tractor speed 1 (C1) which signi?cantly changed soil bulk density resulting in values of up to 1.74 Mg m-3 in the topsoil and compacted subsoil under H1, which is significantly above the critical value of 1.6 Mg m-3 for soils with clay content below 17.5%. The high degree of compaction signi?cantly affected penetration resistance of topsoil. The results demonstrate that different degrees of soil compaction under different moisture levels could greatly influence physical properties in different ways. Even under relatively low water contents, that is, below field capacity, substantial top soil compaction was induced after one tractor pass.

The world population is projected to exceed 9 billion by 2050 (FAO, 2017) with a higher probability of double increase  in   Africa   (Guengant   and   May,  2013). This implies that food production has increase by 70%. In order to reach this target, intensive agriculture using large machinery  for  harvesting,  cropping  and field operations

Artificial soil compaction is influenced by mechanical parameters related to agricultural machines and implement used expressed by axle load, frequency of the machine passages, number of passes, tyre number and architecture, velocity, tyre inflation pressure and soil tyre interaction (Chamen et al., 2003; Hamza and Anderson, 2005; Arvidsson and Keller, 2007; Sakai et al., 2008; Barbosa and Magalhães, 2015; Khemis et al., 2017; D’Hose et al., 2019). Although the effect of frequency of machine passages is of much lesser consequence than that of other mechanical factors, compaction is depending on the appliqued stress time. Thus, although there are dynamic effects such as bouncing and acceleration which might increase stress with speed, on average, the faster one goes over the soil, the less effect it will have (Alakukku et al., 2003, Khodaei et al., 2015). Additional to mechanicals parameters affecting soil compaction, water content is one of the most important factors which depend on soil compaction phenomena. Its effects on the mechanical behavior of soils have been the subject of many studies (Horn and Albrechts, 2002; Hamza et al., 2011; Nawaz et al., 2013, Destain, 2014). All authors observe that mechanical parameters are strongly affected by soil moisture content. However, our understanding of the effect of tractor speed on soil compaction and its impact on arable soils is still limited.

In soil compaction research, the major focus has been on the effect of axle load, number of passes and tire inflation pressure. The main objective of this study was to examine the impact of the machine speed on physicals properties of soil under different soil water contents.

The experimental area was at the Higher Institute of Agronomic Sciences Chatt-Mariem, Sousse University, Tunisia (35°54'40.2"N 10°33'24.3"E). The soil has a silty loam texture (21% clay, 30 % silt, 48 % sand) down to 0.3m depth. The principal crop of the field was a biological potato. Conventional tillage was employed to till the soil. Climate of the region is dry with warm summers, annual precipitation of 558 mm and a mean annual temperature of 21°C. Soil organic matter at the experimental area was 1.2%. Two speeds of tractor under three levels of water contents conditions were used in a completely randomized design (9 treatments) as follows: (C0: control, C1: speed 1= 4 km h-1, C2: speed 2 = 9 km h-1) (H0 (t=0), H1 (after 15 days), H2 (after 30 days)). The tractor exported for this study was a Foton TA700 with total weight of 3.100 kg, power capacity of 51 kW and standard wheel-drive with a single rear tire. The measurements were conducted and samples were picked up from the same field in the Higher Institute of Agronomic Sciences Chatt-Mariem. Undisturbed soil cores (5 cm high and 5 cm in diameter) were arbitrary picked up at depths of 10, 20 and 30cm. Thus, in total 81 soil cores were collected. Penetration resistance was evaluated at depths of 10,20,30,40 and 50cm. In some cases, mainly for H0, the soil was too dry and strong below the normal depth of tillage (around 30 cm) for penetrations to be carried out. In these situations, only the plough layer was measured. The organic matter content was quantified by wet oxidation. Sample collection for measurement of bulk density and water content were made on a region of approximately 1.5 m2. Penetrometer measurements were carried out on a surface of about 3 m radius from the centre of the sample collection area for each treatment. Therefore, all samples and all measurements were conducted as approximately as possible, to decrease the effects of spatial variability to a minimum.

The penetration resistance of the soil (rp) is considerably used to estimate the degree of compaction (Bouwman and Arts, 2000; Sharifi et al., 2007). It is the resistance of soil to the force of penetration per unit area expressed in Nm-2 or in MPa. Penetration resistance was assessed with a hand-driven penetrologger (Eijkelkamp, Giesbeek, The Netherlands). This device combines an electronic penetrometer with a built-in datalogger for storage and processing. It measures the mean vertical stress required for penetration of a steel cone of 11.28 mm. The penetration depth is measured continuously as the cone is pushed into the soil. The measuring range is 0-10 MPa (with a resolution of 0.01 MPa), and the measuring depth is from the surface down to 0.8 m (vertical resolution of 0.01 m). The penetration resistance is greatly influenced by soil water content, soil texture, organic matter content, speed of penetration, and the length and tip angle of the cone. The PR at about 108 measurement points was measured; the penetration  speed  was  0.02 m. s-1  with   a   60°   cone   of  1 cm2.

Bulk density was evaluated on soil samples picked out by using a portable soil sampler with metal cylinders of approximately 5 cm height. Each cylinder was then locked at both ends with pvc covers and was then placed in a polythene sac that was closed tightly. This ensured that the samples would stay at their ?eld water content. Generally, tree replicate samples were picked out from each layer although in a few cases there were more. All samples were dried at same temperature of 105 °C for 24 h in an oven. The dry mass of the soil divided by the cylinder volume provided the bulk density, BD (Mgm-3). The gravimetric water content, W (kgkg-1) was evaluated as the mass of water in the soil sample divided by the mass of the dry soil.

Mean values, standard deviations and standard errors are reported for each of the measurements. ANOVA was used to assess the effects of compaction on the measured variables. When ANOVA indicated a signi?cant F -value, multiple comparisons of mean values were performed by the least signi?cant difference method (LSD). The SPSS software 20 package (2011) was used for all of the statistical analyses.

Using the USDA/Soil Taxonomy texture triangle classification system, the results corresponding to soil texture analyses (Table 1) classified the soil as a silt loam soil.  It had a similar percent of sand, silt and clay and the same particle density in each layer. Soil compaction level and moisture content significantly affected the bulk density. The higher impact of tractor speed is noticed in the top soil, which indicates that the impact of frequency of tractor passages was not transmitted to the subsoil. These results agree with those  obtained  by  Horn  et  al. (1989). However, under the initial soil conditions (C0) and humidity H1, dry bulk density was already 1.32, 1.48 and 1.45 Mgm-3 for depths 0-0.10, 0.10-0.20 and 0.20-0.30 m, respectively. Increases in soil bulk density caused by frequency of tractor passages were higher at lower speed of tractor. For example, for C1, soil bulk density increased by 21% for the topsoil (Figure 1). 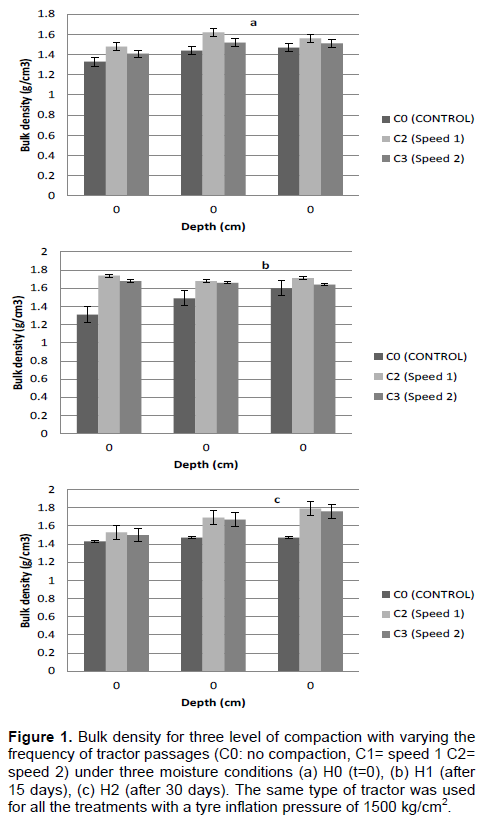 These results agree with those obtained by Horn et al. (1989b), Çarman (1994) and Ansorge and Godwin (2008).The results also support the suggestion by Kayombo and Lal (1994) that speed of tractor is an important factor in soil compaction. Several studies have demonstrated that the increase in passage frequency will have a cumulative compaction effect (Etana and Håkansson, 1994). Dry bulk density always increased with a lower speed of tractor at depth of 0.05 to 0.20 m, but there was no significant difference between the treatments at subsoil layer more than 0.25 m depth (Alakukku et al., 2003).

The investigation on the effects on some soil qualities following passages with two levels of tractor frequency, carried out in central Tunisia, has shown that frequency of tractor passages corresponding to speed 4 km h-1 resulted in significant soil compaction, especially for wet conditions. Bulk density and penetration resistance measurements confirmed these results. Even under water contents below or near field capacity, substantial top soil compaction was induced after one tractor pass. Tractor speed had a significant effect at 15 cm depth and no difference between treatments in the subsoil layer which was confirmed by Arvidsson and Keller (2007). Within the limits of the experimental conditions, it can be concluded that there is a direct relation between the frequency of tractor passages and the degree of compaction in the topsoil. Particularly, lower speed resulted in significant increases in bulk density and penetration resistance in the top 15 cm.