In order to evaluate the performance of highland maize, an experiment was conducted at Bule hora district of southern Ethiopia by introducing five highland maize from Ambo Plant Protection Research Center and Bako Agriculture Research Center, during the main cropping season of 2010 and 2011. The experiment was carried out in a randomized complete block design with three replications. The data were recorded on plant height, ear height, number of ears/plot, grain yield and 1000 grain weight. All the varieties showed significant differences with each other for all the parameters studied. Variety Jibat had the highest grain yield of 9.677t/ha. The highest plant height of 205.1 cm was recorded from BH660. The maximum number of ear per plant was recorded from AMH851(Jibat). The maximum value for 1000 grain weight was shown by AMH851 (405 g). Therefore, maize variety AMH851 (Jibat) was found to be the most promising, which has the potential to increase the average yield of maize in Bule hora district and is therefore recommended for the replacement of the low yield land race of the area.

In Ethiopia, maize (Zea mays L.) exceeds all other cereal crops in terms of annual production and productivity. Maize is increasingly an important component of diets across the country. It is considered as a major source of protein ranking only behind meat, fish and legumes in terms of yearly protein production (Dasbak et al., 2008). The grain is similarly rich in vitamins and fats and makes the crop match suitably, as an energy source, with root and tuber crops per unit measure (Kling, 1991; Dasbak et al., 2008). Though, maize is the most dominant cereal crop in Borana mid highland of southern Ethiopia, its production is hampered by biotic and abiotic stresses among these problem, lack of improved seed is the commonest problem in the study area. In Borana zone  of southern Oromia, maize is one of the major cereal crops widely cultivated during the main cropping season (Ganna) and production of this crop in this area is far below the average national yield. This is due to the lack of improved maize varieties that are widely adapted to the area and the presence of maize stalk borer during the epidemic year. The cause of low productivity has been ascribed partly to the use of traditional low-yielding open- pollinated varieties (MOFA-SRID, 2006). At present, there is a growing demand for use of hybrid maize, hybrids have uniform production, higher yielding and are stable in performance as well as in other plant characteristics (unpublished source material).
In  Bule  hora  distric   of   Borana   mid   highland,   the problem of the area is well documented and still no efforts have been made so far to improve production and productivity of maize. In this area, farmers look for high yield variety, adaptable and resistant to disease like maize leaf rust (Puccinia sorghi), southern maize blight and maize stalk borer. In the study areas, farmers continuously grow maize which are local and late maturing which takes 8-9 months as well as have low yield and exposed to disease for a long period of time. This paper tried to evaluate five improved highland maize for its adaptability and better agronomic performance at the study areas and areas with similar agro-ecology in the Borana mid highland.
Objective
To identify high land maize variety that is adaptable, with higher yielder and better agronomic performance under Bule hora district of southern Oromia.

Five improved release highland maize varieties were introduced from Ambo Plant Protection Research Center for its adaptability and yield trial at Bule hora district for two consecutive cropping season of 2011 and 2012. The RCBD with three replication was used and a total plot area of 4.2 m x 3 m. And an inter and intra-spacing of 70 x 30cm were used, respectively. All the recommended field management and fertilizer were used as per the recommendation for the maize (Table 1).
Data analysis
All the agronomic data were recorded and subjected to analysis. Analysis of variance was performed using the GLM procedure of SAS Statistical Software Version 9.1 (SAS, 2007). Effects were considered significant in all statistical calculations if the P-values were ≤ 0.05. Means were separated using Fisher’s least significant difference (LSD) test.

Analysis of variance
The analysis of variance (ANOVA) for different plant traits recorded is given in Table 2. According to ANOVA, the varieties differ significantly for their plant height (cm), ear height (cm), ear per plant, TSW (g) and grain yield (t/ ha) (Table 2).
Plant height (cm)
All the varieties showed significant difference for plant height (Table 2). Among the tested cultivars, BH660 had the highest plant height (205.1 cm) followed by BH670 (188.8 cm), while short statured plants of 145 cm were recorded from AMH850 (wanchi). Hussain et al. (2011) reported differential pattern of maize varieties for plant height.
Ear height (cm)
The difference in ear height (cm) in this study was found to be significant owing to the genetic variation among the evaluated maize varieties. Still, the BH660 had the maximum ear height (113.1 cm), while the shortest ear height was recorded for AMH850 (66.6 cm). These results got sufficient substantiation with the findings of Hussain et al. (2011) and Nazir et al. (2010)
Number of ears per plant
Significant differences were recorded among evaluated highland for their ear number per plant (Table 2). Variety AMH851 (Jibat) gives the maximum number of ears per plant (1.95.0), while the minimum number of ear per plant was recorded from Bh660 (1.40). Other researchers also reported genetic variations among different maize hybrids (Ihsan et al., 2005; Haq et al., 2005).
Thousand seed weight (TSW)
Grain weight is an important yield and yield component of maize and varies from maize variety to maize. The result of TSW significantly differs among the varieties (Table 2). The maximum value for 1000-grain weight was obtained from AMH851 (405.00 g), while the minimum value was obtained from cultivar   BH660   (295 g).  The   observed differences may be attributed to the genetic makeup of the varieties. In support of this finding, different researchers have reported significant amount of variability in different maize populations studied.
Grain yield (t/ha)
Significant  differences  were  obtained   for   grain yield among different varieties used in this trial. Maize variety AMH51 (Jibat) showed higher grain yield (9.677 t/ha), while variety BH660 produced lower grain yield (5.334 t/ha). Similar result corroborated with result reported by Akbar et al. (2009) who evaluated and identified high yielding maize varieties among different genotypes tested.
Among the improved high land maize varieties evaluated for their  adaptability  at  bule  hora,  the longest cob length was obtained from Jibat (AMh51) and not significantly different from others and similar result was obtained for cob diameters. The highly significant result was obtained for kernel row per cobs and kernel per row and the highest result was obtained from Jibat (AMH51) maize varieties (Table 3). 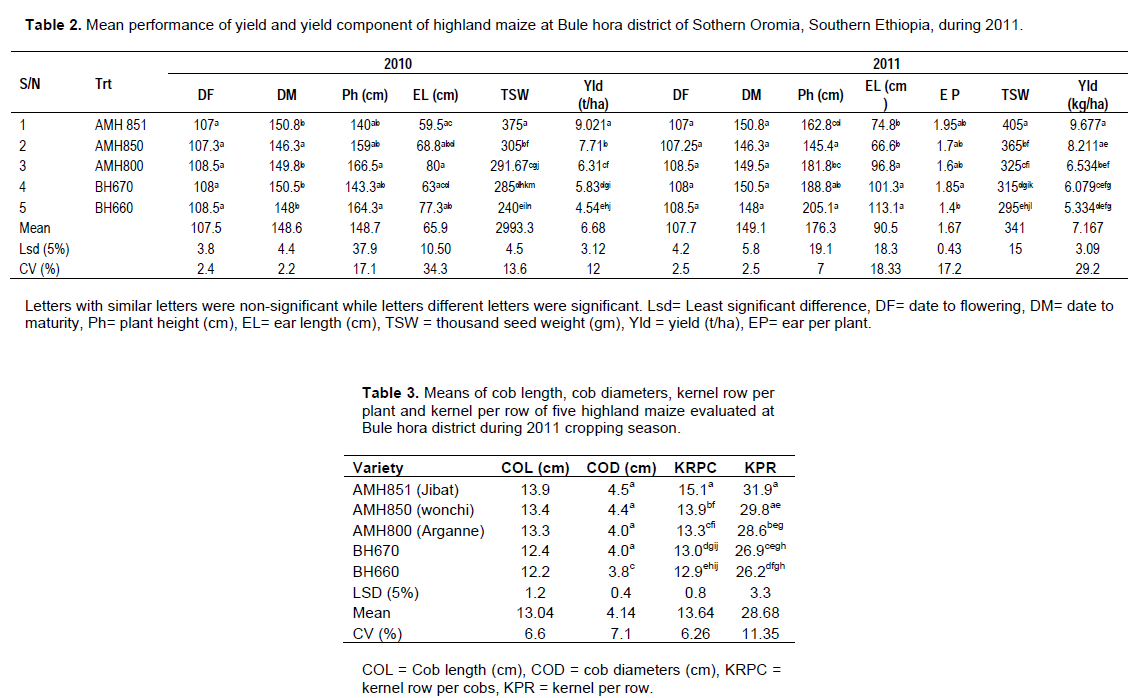 For cob diameter, all the seven highest yielding top cross hybrids were statistically the same and were not different from the three checks. Overall, the mean cob diameter was 4.2 cm, and ranged from 4.2 (Omankwa) to 4.4 cm (Aburohemaa) for the checks and 3.3 (Fu 2090 DWDP x TZEI-48) to 4.6 cm (TZEI-W-POPDTSTRC4 x TZEI-3) for the top cross hybrids (Table 3).

From this experiment, it is concluded that the cultivar AMH851 (Jibat) remained superior in its yield and yield component during the experimental years. Therefore, this variety is recommended for Bule hora area and for similar agro-ecology of the zone. The results of this study revealed that there is a considerable amount of difference among the variety which could be used for further improvement in maize breeding.