The success of species implantation depends on the quality of seeds used initially. It is therefore important to ascertain that the seed is in an excellent physical, physiological, sanitary and nutritional condition as this will determine the genetic cultivars’ potential. Thus, this research work studied the relationships between physical and physiological variables in the seed. Samples were analysed and grouped according to their similarities. A total of 2,586 black oat seed samples were studied, 2,229 were samples of the seed production process and 357 were samples of their own use, and analyzed in the laboratory of the Agronomy Course of Unijuí, Ijuí, RS. Pearson's linear correlation coefficients, multicollinearity analysis, track and cluster analysis was determined by the agglomerative method of the most distant neighbor. The normal seedlings showed the highest correlation of negative signs, and direct effect with dead seeds. The multicollinearity analysis indicated a severe condition number, influenced by the percentage of pure seeds and number of other seeds per number. Three groups of samples were identified in the seeds produced according to the national seed system and four groups in seeds for their own use. The most representative groups presented the highest physical and physiological qualities. The variable, dead seeds, was the one that influenced the germination of normal seedlings most.
Key words: Avena strigosa (Schreb.), multicollinearity, path analysis, grouping.

The work was carried out based on the database from the Laboratory of Seed Analysis of the Agronomy Course, Regional University of the Northwest, the State of Rio Grande do Sul, Ijuí, RS. The analysis results of black oats (Avena strigosa Schreb.) analyzed between 2006 and 2014 were evaluated. A total of 2,586 samples were used, of which 2,229 were samples of the seed production process, belonging to the first and second generation categories S1 and S2, respectively, and 357 were seeds for their own use.
Physical and physiological quality analyzes were performed following the methodology recommended by the Seed Analysis Rules (Brazil, 1992, 2009). Samples in the seed production process were analyzed for purity and germination, while seed samples for own use were analyzed using only the germination test.
The variables used were: percentage of pure seeds (%), percentage of inert material (%), percentage of other seeds (%), number of other seeds per number, number of seeds from other cultivated species, number of seeds from wild species, number of seeds from noxious species tolerated, percentage of germination from normal seedlings (%), percentage of germination from abnormal seedlings (%), percentage of dead seeds (%) and batch representativeness, in seed samples produced in the seed production process. In the seeds for own use, the percentage of germination of normal seedlings (%), germination percentage of abnormal seedlings (%) and dead seeds (%) were used.
The study on degree of relationship among variables was performed through Pearson's linear correlation analysis. The multicollinearity analysis was performed to identify the existence of a strong correlation between two or more variables and the results were interpreted according to the condition number (CN), as proposed by Montgomery and Peck (1982), whereas the direct and indirect effects of the other variables studied on the percentage of germination were determined by track analysis. The cluster analysis was also carried out by the agglomerative hierarchical method of the most distant neighbor, or full binding through the Euclidean distance. This method was chosen because it formed more in the homogeneous groups, favoring the discussion and interpretation of the results. The defined criterion for the formation of the groups was 70% of resemblance and, after the group’s formation, the arithmetic mean of each variable was estimated to characterize them. Statistical analyzes were performed using the GENES programs (Cruz, 2013), adopting 1% probability of error. 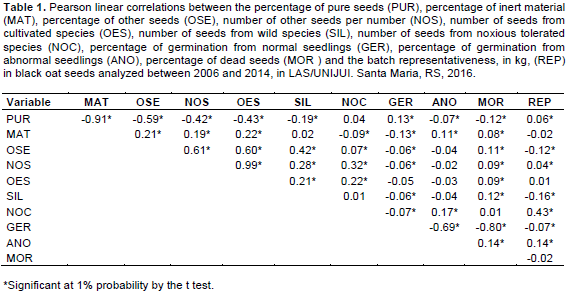 In the first group, the two samples presented low germination and high levels of dead seeds, which is characterized as a group with low physiological quality.
The third group, in turn, was distinguished by the high number of other seeds, especially of seeds from other cultivated species, showing low physical quality. Whereas, the second group, which is more representative, presented a high degree of physical and physiological quality (Table 3).
The grouping of the self-use analyzes formed four groups (Table 3). Four samples were obtained in the first group, eight in the second group, 298 in the third and 47 in the fourth group. The analysis of the first group indicates a low index of seed germination and high index of dead seeds. The second group presented low germination and high index of abnormal seedlings. The third group, more representative, presented high germination, demonstrating a high degree of physiological quality, while the fourth group had intermediate values â€‹â€‹of normal seedlings and significant values â€‹â€‹of dead seeds (Table 3).
The higher variability observed in seeds for own use, with the formation of four similar groups, support the results obtained by Tozzo and Penske (2008), which showed a great discrepancy in the results and subjectivity in the criteria adopted by the farmers in the selection of their seeds. As for crop productivity, Marcos-Filho (2015) emphasized the importance of the use of quality seeds for establishment of the field stand and highlighted other factors directly associated with productivity, such as cultivar choice, climatic conditions, soil fertility, sanity, timing and procedures adopted at harvest to reduce losses.

The authors are grateful to the laboratory staff for support in the accomplishment of the seed analysis, and the farmers and companies who were relied on, for the analyzes carried out.