From yield to application: Nutrient requirement of maize (Zea maize) in Southeastern and Southwestern Ethiopia at zonal level

In southwestern Ethiopia, crop production system is characterized with low input, legume-maize rotation. Low input is compensated by N-fixing characteristics of legumes. The yield of maize after soybean in Kersa and Tiro afeta districts of Jimma zone is about 1.5 t/ha more than the yield of maize grown in continuous growing system (Farmer’s response on interview). However, there are no seed companies that multiply and disseminate legume seeds in the region. Expansion of legume in agriculture is important method of harvesting nitrogen that increases the N capital of soils. In this regard, highly depleted lands can be restored mostly though growing legumes on the fields.

Using better crop management practices leads to high crop yield and then to improve food security. These need a holistic understanding of current crop management practices and factors that govern them. Among crop management practices, nutrient management is an important step to improve crop productivity and food security. Currently, fertilizer application in crop production in Southeastern and Southwestern Ethiopia is based on blanket recommendation. However, production, economic and environmental reasons, it is important to consider spatial yield responses to nutrients and agronomic efficiency of nutrients for estimating optimal nutrient requirement of a crop (Rurinda et al., 2020; Workneh et al., 2019). The objective of this paper was to (1) estimate N, P and K requirement of maize for the current and future maize production in East Shewa and Jimma zones of Ethiopia in which maize is largely grown as staple food and (2) to demonstrate low cost (without testing soil and plant samples in the laboratory), procedure of site specific N, P and K requirement of a maize crop.

The study was conducted in Southeastern (East Shewa) and Southwestern (Jimma) zones of Ethiopia (Figure 1). These areas are of contrasting agro-ecologies: East Shewa is characterized with low annual rainfall, sandy-loam soil with low maize yield potential (about 6.2 t/ha), whereas Jimma is a region with high annual rainfall (1500 mm/annum in average), mostly clay soil and high maize potential area (up to 15 t/ha) 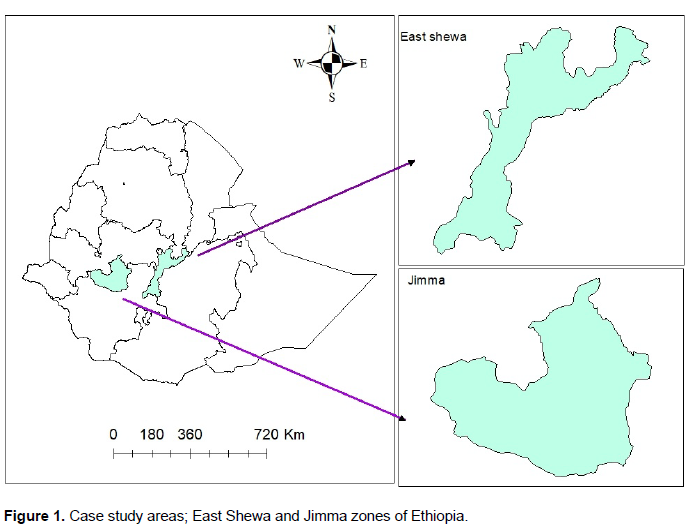 Current maize yields were retrieved from SPAM2005 (You et al., 2014). The average increase of maize yield in previous 25 years (1993-2018) is 3.8% (FAOSTAT, 2019) in Ethiopia. To estimate the maize yield in the future (for up to 25 years from now), the current yields were multiplied by this percentage yield increase factor. The average agronomic efficiencies and yield responses of N, P and K were obtained from previous studies in the regions (Tesfaye et al., 2019). The yield responses of N, P and K in Jimma were 0.56, 0.15, and 0.015 whereas in East Shewa, these values were 0.33, 0.18 and 0.045. The agronomic efficiency of maize in Jimma was 35 kg/kg N, 25 kg/kg P and 1 kg/kg K (Tesfaye et al., 2019). The agronomic efficiencies of N, P and K in East Shewa zone were 29 kg yield/kg N, 22 kg yield/kg P and 4.5 kg yield/kg K. The nutrient requirement to achieve these yield levels were estimated for both current and future maize yields from the quotient of yield response to agronomic efficiency of the nutrients in the respective region.

Current maize yield in East Shewa ranges from 0.8 t/ha in low yielding areas to 5 t/ha in high yielding areas (Figure 2). However, in most areas of the region, the yield of the crop is hardly greater than 4 t/ha. This maize yields are in agreement with the result of Central statistical Agency of Ethiopia (CSA, 2015; CSA 2016). In the future, the yield of the crop mostly ranged from 3.5 to 4.3 t/ha. The projected yield increment goes hand in hand with an equivalent increase of nutrient requirement of the crop in the future. In Southwestern, Jimma zone, maize yield is slightly higher than the East Shewa zone under the current and future yield expectation. However, the minimum yield can be as low as 0.5 t/ha (Figure 2) that is less than the minimum yield in East Shewa whereas the maximum yield can be as high as 7 t/ha in the future. The expected yield in major areas of the region was less than 4.4 t/ha. 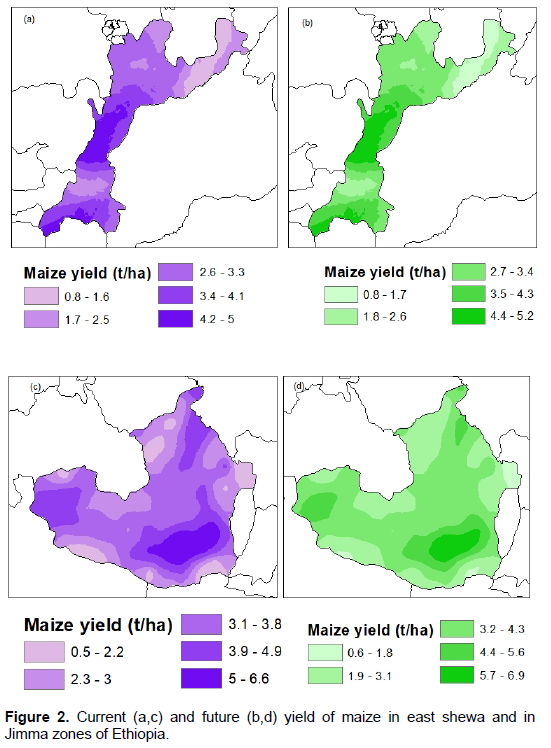 In very few areas, N requirement was not greater than 20 kg/ha in the East Shewa zone. The P requirement of the crop was also variable in the region (Figure 3). It ranges from 7 kg/ha to nearly 40 kg/ha in the potential areas of the region. In large areas of the region, the P requirement of maize was not exceeding 30 kg/ha in East Shewa. However, few potential areas require more than 28 kg P/ha but less than 41 kg P/ha. Being one of the essential macro nutrient, K requirement of the crop is as shown in Figure 3. It showed variation with yield and yield responses in each study area. The result showed that the majority of the region requires less than 33 kg K/ha, whereas in very few locations application of less than 16 kg K/ha is enough under current production situation. In Jimma zone, higher N, P and K were estimated than East Shewa for attaining current maize yield (Figure 4). Majority of the maize growing areas require 49-61 kg N/ha, 19-23 Kg P/ha and 46-57 kg K/ha in this zone. 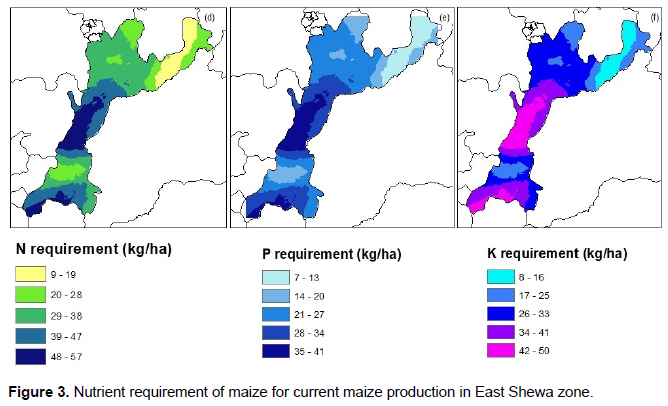 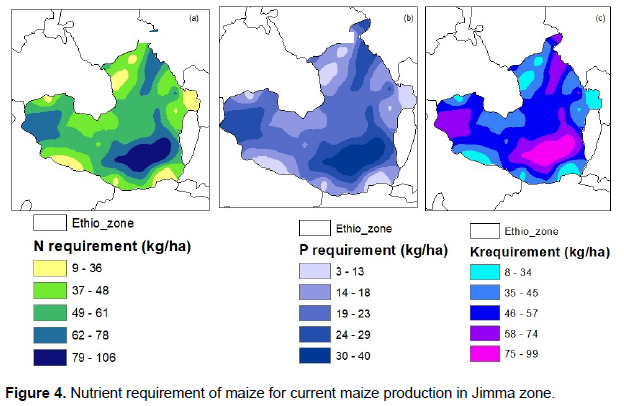 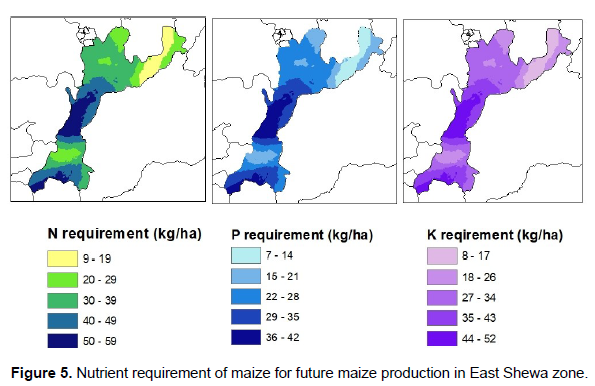 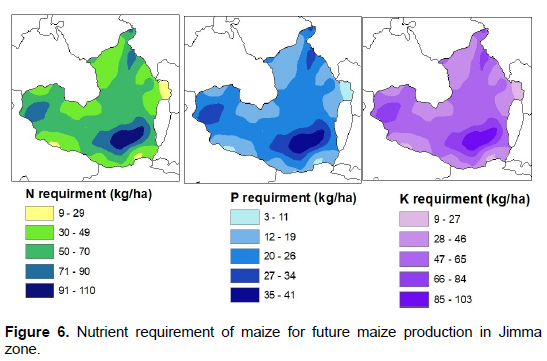 In Jimma zone, the assessment showed higher N, P and K requirement for the future maize production compared to the East Shewa zone. In areas where high yield is expected, more than 90 kg/ha N is required. However, the majority of the regions require 50-70 kg N/ha, 20-26 kg P/ha and 45-65 kg K/ha for maize production. However, there are locations that require as high as 110 kg/ha N, 41 kg/ha P and 103 kg/ha K in Jimma zone (Figure 6). The N, P and K requirement of maize can further increase if farmers apply a package of good agronomy in which yields can be increased more than the projected yield expectation. Though the yield response to K fertilizer is not significant in both zones (Tesfaye et al., 2019), K application is important to replace the nutrient removed by the crop (Ten Berge et al., 2019). With standard deviations of 24, 9 and 22 kg/ha, respectively, the average N, P and K requirement of maize in Jimma zone was  found  to  be  54, 20 and 51 kg/ha. In total, the minimum N, P and K required for maize production in Jimma zone per annum for the future was estimated to 11.5, 4.3 and 10.7 tons.

This work was supported, in whole or in part, by the Bill & Melinda Gates Foundation [grant number:]. Under the grant conditions of the Foundation, a Creative Commons Attribution 4.0 Generic License has already been assigned to the Author Accepted Manuscript version that might arise from this submission.