Geometry information of wet bulb is important for the design of projects and management of drip irrigation, mainly to estimate the volume of wet soil, emitter flows and irrigation time. This study aims to determine the dimensions of wet bulb formed by drippers with different flow and terrain declivities. For this, soil moisture levels were determined throughout the soil profile after drip irrigation with three flow emitters associated with four terrain declivities. It was verified that when the terrain was in level, there was greater radial migration of water on the soil surface with increase in the flow dripper, resulting in more open wet bulbs. On the other hand, increases in flow and declivity provide lower vertical percolation of water, obtaining smaller depth of moisture in the soil profile. Therefore, different terrain declivities and flow drippers influence wet bulb geometry and moisture distribution, indicating the importance of relief in the positioning of emitters in drip irrigation.
Key words: Trickle irrigation, drippers, soil moisture.

Different population increase and natural resources, including water are finite. And, due to increasing demand for these resources, words such as rationality, management and productivity are heard more frequently (Salvador, 2014). Thus, drip irrigation offers opportunities for optimizing these concepts, providing improvements in yield and efficiency of water use, influencing positively the quality of food production (Valipour, 2012a). According to Tolentino Júnior et al. (2014), drip irrigation is a technology that has been expanding quickly in modern irrigated agriculture. This irrigation technique is characterized by applying small volumes of water in high frequency and directly in the root zone of crops, preserving the soil at field capacity and preventing water loss by evaporation and percolation (Frizzone et al., 2012; Valipour, 2012a). This application results in a volume of wet soil, known as wet bulb. The knowledge of the distribution of water in the soil is of great importance both for the dimension of irrigation systems as well as in its management, because the determination of emitters spacing, number of emitters and evapotranspiration rates depend on the previous information about the soil’s water movement (Souza and Matsuura, 2004; Valipour, 2014).
Moreover, the high investments required in the implementation of this irrigation system cannot provide financial returns to the farmer, if he does not use proper techniques of irrigation management aimed at rationalization of water use and increased productivity. Thus, several studies have been developed for determining the dimensions and characteristics of the wet bulb associating different flows, operation times and soil types (Coelho et al., 1995; Nogueira et al., 2000; Souza and Matsuura, 2004; Rivera, 2004; Baker et al., 2008; Maia et al., 2010; Levien et al., 2012; Valipour, 2012b; Tolentino Júnior et al., 2014). And, although it is clear that the radius (horizontal dimension) is favored by the capillary of soil, flow emitter, application time, water retention capacity of the soil and the wet depth (vertical dimension) controlled by the gravitational force, that is, the drainage capacity of the soil, these relationships have not been clearly studied in association with different terrain declivities.
This may result in wet bulbs with different geometric characteristics, compared to the terrain without declivity. It is worth pointing out that, in Brazil the followings are considered: Permanent Preservation Areas (APP) or non-cultivated areas, hillsides, with declivity above 45°, and equivalent to 100% in the line of maximum gradient, hill top, mound, mountains and sierras, with a minimum height of 100 m and average slope larger than 25° (47%), and areas delimited from contour corresponding to two-thirds of the minimum height of elevation, which is defined by horizontal plains or adjacent water surface or undulating reliefs (Brasil, 2012). It is observed the law of situating farmlands in regions with not very restricted declivity values. Thus, the aim of this study is to determine the dimensions of the wet bulb formed in the surface drip irrigation associated with different flows and declivities terrain.

The study was conducted at the Instituto Federal Goiano - Campus Urutaí, in Urutaí - GO, located at 17° 29'06 "S, 48°12'27" W and 712 m of altitude, from February to July 2014. According to Köppen classification, the climate is Cwa, characterized as humid tropical; it has dry winter and rainy summer; it has average annual temperatures of 2000 mm and 28°C, respectively. The experiment was set up in a 5×3 factorial design, with three replications; the treatments are constituted by irrigation in four terrain declivities (0, 10, 20 and 30%, corresponding to 0, 5.70, 11.30 and 16.70°, respectively) by auto-compensating drippers in three different flows (4, 5 and 8 L h-1). A drip irrigation system was set up to enable the operation of only one lateral line applying three auto-compensating emitters simultaneously in the same flow along the declivity.
In each application, tomato crop was used, considering the final stage of the culture, crop coefficient of 1.10 (Santana et al., 2011), evapotranspiration of 5.40 mmdia-1 (Bernardo et al., 2006), two days irrigation frequency, percentage of wetted area (40%) (Bliesner and Keller, 1990), culture space of 1 × 0.4 m (Macedo et al., 2005) and 90% application efficiency. Thus, the system operating times for the flows 4, 5 and 8 Lh-1 were 32, 26 and 16 min. For the determination of profile of the wet bulb, 1 h after completion of the application of irrigation depth, disturbed soil samples were collected by a screw-type auger, and taken to the laboratory for determination of moisture content. This sampling was performed in order to cover the entire profile wetted, both at horizontal (surface) and vertical plane (depth), forming a gridded mesh. For this, in the horizontal plane, it was used a spacing of 10 cm and, in the vertical plane, it was used a spacing of 15 cm, taking as a reference the drip emission point. Table 1 shows the physical characteristics of the soil studied, and obtained as described in the methods of Embrapa (2011).

Figures 1, 2 and 3 show the isoline of gravimetric moisture in percentage, showing the distribution of water inside the wet bulb, xy (ground surface), xz (along the emission line) and yz (perpendicular to the emission line) planes for flows 4, 5 and 8 L h-1, respectively. As the water infiltrates the soil, the upper layers of the soil will moisten from top-down gradually altering the moisture profile. As long as there is water supply, themoisture profile tends to saturate in all the depth, and the surface will be, of course, the first level to saturate (Brandão et al., 2006). Thus, for all wetted bulb profiles, samples were collected for the determination of moisture content 1 h after application of the irrigation depth. The water redistribution movement in the soil profile resulted in increased moisture content near the surface and it decreased with soil depth. Analyzing Figures 1, 2 and 3, it is observed that the terrain declivity affect the behavior of the water distribution in the soil, wherein increments in the declivity resulted in a higher tendency to displace front of the wet bulb in the declivity direction. Barreto et al. (2008), evaluating wet bulbs through multiple cuts at trench, also noted the humid region development trend following the terrain declivity. 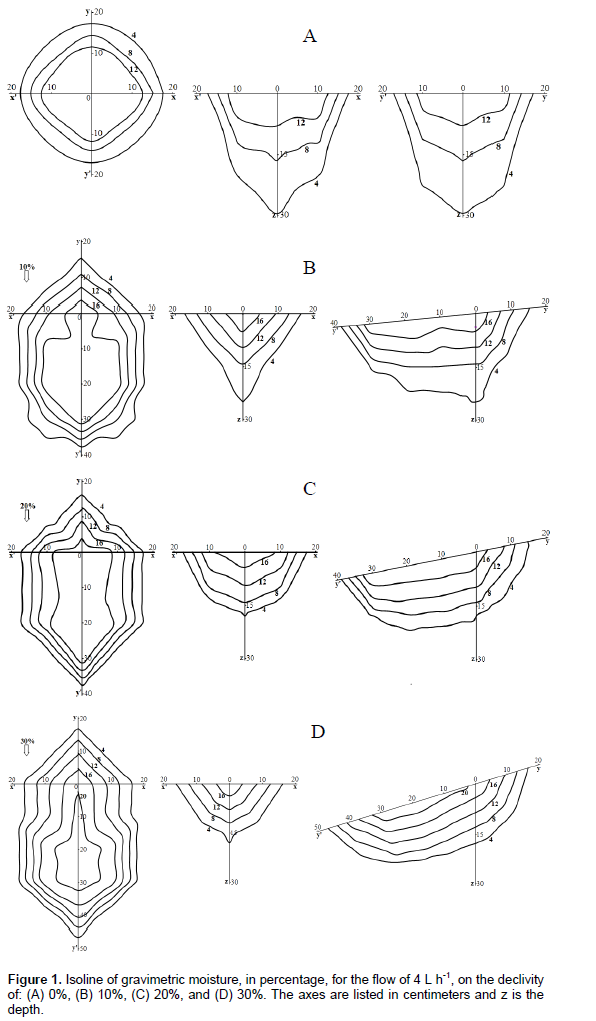 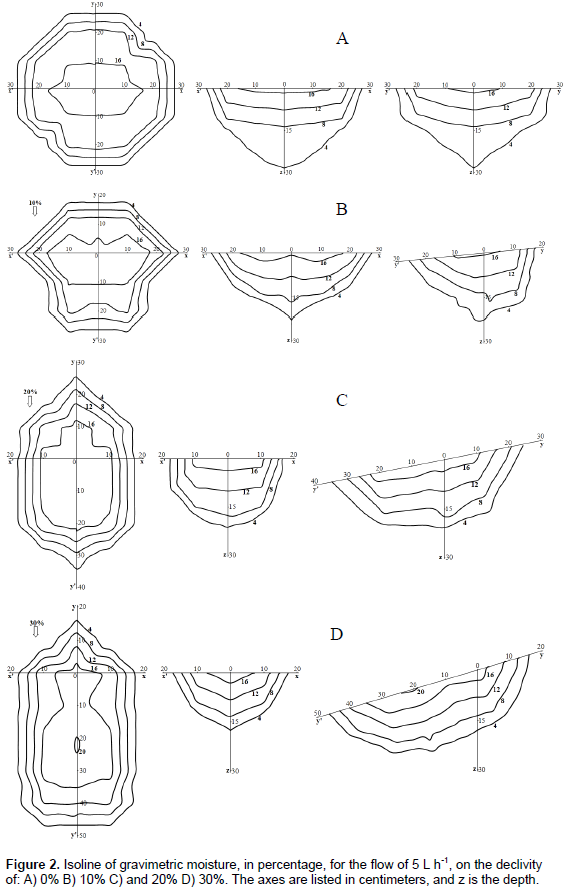 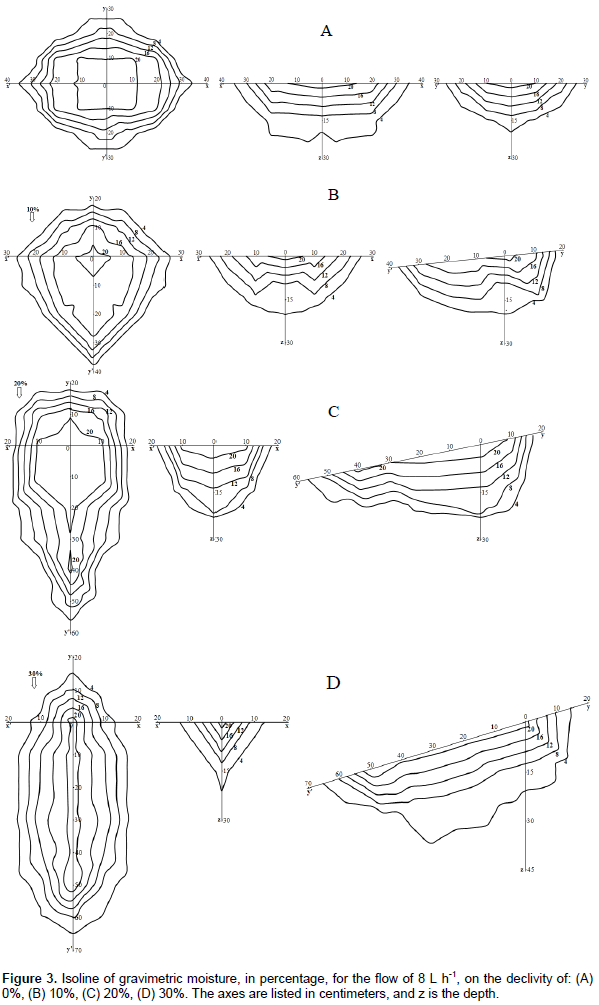 Moreover, it is verified that when the terrain was in level area (Figures 1A, 2A and 3A), there was greater radial migration of water on the soil surface with increase in the flow dripper, resulting in more open wet bulbs. On the other hand, increases in flow and declivity provided lower vertical percolation of water, obtaining smaller depth of moisture in the soil profile. This can be explained by the fact that water tends to move to the soil surface before the infiltration-percolation process begins. Analyzing Figures 1A and 2A, it is observed that the bulb radius was smaller than its depth; similar situation was observed by Souza et al. (2007). In Figure 1A, it is verified that the radial distance achieved by the wetted surface was 18 cm, wherein Rivera (2004) and Nogueira et al. (2000), applying water by surface drip, obtained radial values of 35 and 25 cm, respectively. This difference may be due to the application volume (6 and 4.33 L) and standby time (24 h) for collecting samples, which were 2.17 L and 1 h, respectively.
Also, in the same Figure 1A, the maximum depth reached was 30 cm, while Barros et al. (2009) applying the volume of 3 L of water by subsurface drip irrigation with a flow emitter of 4 L h-1, in a red nitosol; the value obtained was 18 cm of depth. Differences were caused, probably, by a higher content of clay in this soil type. Figure 3A verified a predominance of radial dispersion on the vertical, similar to that observed by Maia et al. (2010) and Souza and Matsura (2004). According to Maia et al. (2010), the application rate of some emitters may be larger than the water infiltration capacity on the soil, which, therefore, will tend to form bulbs with larger surface width and less depth. Another important factor was that during the field test, the formation of a thin crust under the drip was observed, possibly by dispersing particles during application of water, which can be related to larger flow of the emitter and decreased porosity. This leads to soil hydraulic conductivity, which is in accordance with the results obtained by Rivera (2004).
Maia et al. (2010) study the dimensions of the wet bulb by surface drip irrigation in four different application times (1, 2, 4 and 7 h) and four flow emitters (1, 2, 4 and 8 h L-1) on a quartzarenic neosol; they verified that the maximum bulb diameter on the surface was lower than 60 cm in the time 1 h of application. Results are contrary to those obtained in this research; therefore, all the application time was lower than 1 h (16, 26 and 32 min), and in the declivity of 30%; for example, a maximum surface diameter larger than 60 cm was observed. This difference can be explained by the local topography of the experiment while that the terrain was leveled. This shows the importance of declivity in the dimensions of wet bulb. The largest depth of water used for the applications occurred in the flow of 4 L h-1 and declivity of 0% (Figure 1A), whose value was 30 cm. Wherein, according to Bernardo et al. (2006), the effective depth of the root system of tomato cultivation is generally 40 cm. It was concluded that, even in the application that reached larger depth than 30 cm, there would be water loss by deep percolation if the tomato crop is established.

According to the experimental conditions, it can be concluded that the different terrain declivities and flow drippers influenced the wet bulb geometry and moisture distribution in your area, evidencing the importance of relief in the placement of emitters in surface drip irrigation.