Effects of spacing on yield and head characteristics of cabbage (Brassica oleracea var. capitata L.) in two agro-ecologies of Ethiopia

Cabbage (Brassica oleracea var. capitata) is one of the major vegetable crops grown in Ethiopia. In the 2018 rainy season, 31,400 tonnes of head cabbage was produced. Despite its importance, the productivity of cabbage in Ethiopia remains very low (6 t/ha) as compared to world (28.8 t/ha) and East Africa (16 t/ha). Low plant population was one of the major causes of low yield and big size heads, which consumers and vendors do not prefer. Therefore, an experiment that comprised two cabbage varieties and seven spacings was undertaken at two agro-ecologies during the 2018 and 2019 rainy seasons. Results of the experiment showed that the highest yields of Copenhagen market (99.69 t ha-1) and Landini F1 (96.9 t ha-1) were obtained at spacings of 40 cm × 20 cm and 40 cm × 30 cm as compared to the control (59.78 t ha-1), which is a 66.7 and 74.2%  increase over the control. Therefore, the spacings of 40 cm × 20 cm and 40 cm × 30 cm were recommended for Copenhagen market and Landini F1 varieties, respectively. At the same time, Kulumsa was a suitable site for growing both varieties of head cabbage.

Cabbage (Brassica oleracea var. capitata L.) is one of the most popular vegetable crops grown worldwide. The total annual world production of cabbages and other brassicas in 2018 was about 69 million metric tonnes (FAO, 2021). while East African countries produced 14.8 million tonnes of cabbage on about 92.5 thousand ha of land during the same year.  Cabbage  is  also  among  the  widely  grown vegetable crops in Ethiopia. In the rainy season (June-August) of 2018, 31,400 tonnes of cabbage was produced on 5,200 hectare of land involving 439 thousand households (CSA, 2018). The productivity of cabbage in Ethiopia is very low (6 t/ha) compared to global (28.8 t/ha) and East Africa (16 t/ha) output.

Cabbage is known  worldwide as a source of vitamin C, minerals and dietary fiber. In Ethiopia, cabbage is usually grown in the mid and high altitude areas of the country both for household consumption and as a source of income. Moreover, the portion of cabbage is exported to neighboring countries of Djibouti and Somalia. In 2018, the country exported 1,575 tonnes of cabbage and lettuce to these countries and earned about 300 thousand USD (8.27 million Birr) (ERCA, 2018).

Although cabbage is source of food, income, foreign currency and employment, its production and productivity has been gripped by several problems. Lack of adapted varieties for the different agro-ecologies of the country, unimproved insect and disease management systems and agronomic practices are among the major constraints that resulted in low productivity and quality in cabbage. Cabbage head size depends on choice cultivar as well as on cultural practices such as plant population and rate of fertilization (Semuli, 2005; Ko?ota and Chohura, 2015). Moreover, growth and development of cabbage head vary within and between production fields, forcing growers to undertake multiple harvests. Production practices such as uniform spacing of plants contribute in reducing such variability in plant growth, development and ultimately head size of cabbage. Marketable yields, for a once-over-harvest, were higher from fields with uniform cabbage head size (Stoffellal and Fleming, 1990). Plant population plays a significant role in the final crop yield and quality under any given condition (Adeboye, 1996; Alofe et al., 1996; Mutungamiri et al., 2001). Carlson et al. (2003) also reported that evenly spaced stands of plants resulted in optimum plant po-pulation, that gave greater yields than unevenly spaced stands. Blanket recommendation of 60 cm between rows and 40 cm between plants has been used for all varieties and across production areas in Ethiopia. However, the use of the above spacing led to the production of big size heads often with low production per unit area. The big sized heads, however, were not preferred among retailers and consumers as they were not amenable to existing retailing system. Therefore, the need for optimum plant population (spacing) that results in high yield and desirable head size has become unequivocal. The objective of the current study is thus to determine the optimum spacing suitable for two com-monly grown varieties across two major agro-ecologies: the high-altitude and mid-altitude areas of the country.

Seeds of both varieties were sown on raised seed beds and the seedlings were grown for a month until they attained 3 to 4 leaves. The seedlings were transplanted on 22/08/2018 and 18/07/2019 at Debre Zeit, and on 18/09/2018 and 14/08/2019 at Kulumsa. The treatments received uniform application of 242 kg of NPS at transplanting and 130 kg urea in two splits, half at transplanting and the remaining half 30 days after transplanting. Karate (1 l/ha) and Dimetiote (Roger, 1 l/ha) were sprayed against cabbage aphids and flea beetles as deemed necessary (Mengistu and Seid, 1990).

Factorial combinations of variety and spacing treatments were laid out in randomized complete block design (RCBD), with three replications on a plot size of 4 m2 per treatment. Five random samples of matured heads were harvested from the central plants to record data such as: diameter, height and weight of heads, and number and weight of non-wrapper leaves. Total yield per plot was recorded as the weight of matured heads in the central rows of each plot, excluding boarder plants. Yield per ha was calculated. All the other data were analyzed using Satistix 8 statistical package (Analytical Software, 2008) and those which showed significant differences among the treatments were separated using Tukey’s test at 0.05 level of probability.

The four way interaction among location, year, variety and spacing and the three way interactions except for location, year and variety were not significant for the studied parameters. The significant interaction among location, year and variety was only in head height and weight (Table 1). However, the difference was not significant in head diameter, number and weight of non-wrapper leaves. Both Copenhagen Market and Landini F1 produced better heads at Kulumsa as compared to those produced at Debre Zeit. Coppenhagen Market and Landini F1 grown at Kulumsa produced 29.5, 24.0, 12.2 and 22.8% better head height and 90.7, 82.3, 64.9 and 89.9% better head weight than those grown at Debre Zeit during the respective growth periods of 2018 and 2019 (Table 1). The better yield at Kulumsa indicated that the plants at Kulumsa were effective in head formation rather than spending their photosynthates on forming non-wrapper leaves. This is due to the fact that cool agro-ecologies are more suitable for head formation of cabbage than warmer agro-ecologies. Dixon (2007) indicated that Brassicas need vernalizing temperature of below 10°C to initiate heads. The results further confirmed that Copenhagen Market was more suitable in highland areas like Kulumsa than in the midlands such as Debre Zeit. 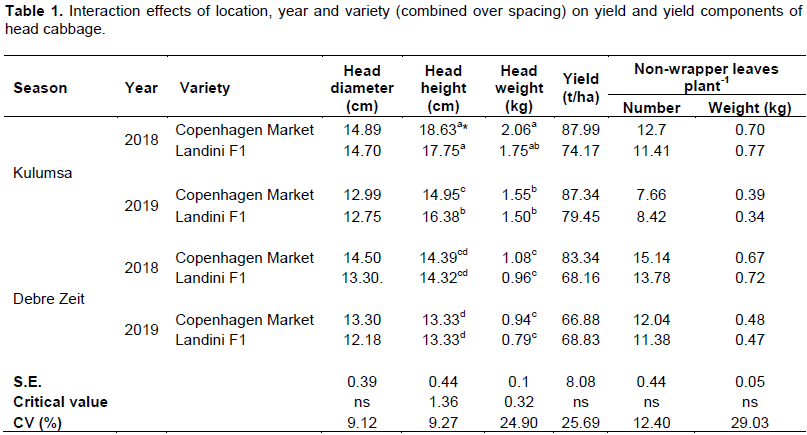 The interaction between variety and spacing was not significant for the studied parameters, except for yield (Table 2).

The highest  yield (99.69 t ha-1) of Copenhagen Market was obtained when plants were spaced 40 cm between rows and 20 cm between plants as compared to the control (59.78 t ha-1). It has a 66.7% increase over the control. However, there were no significant differences among the other spacings of Copenhagen Market. Unlike Copenhagen Market, Landini F1 produced the highest yield (96.9 t ha-1) when planted at 40 cm between rows and 30 cm between plants. It has an increase of 74.2%  compared to the control, which produced only 55.63 t ha-1. However, no significant differences were observed in yield among the plants of Landini F1 planted at 40 cm × 30 cm, 40 cm × 20 cm and 50 cm × 20 cm spacings. The interactions among variety, year and location, and be-tween variety and spacing were not significant for number and weight of non-wrapper leaves (Tables 1 and 2).

The means of variety main factor also indicated that Copenhagen Market produced higher yield (81.39 t/ha) than Landini F1 (72.65 t/ha) irrespective of location, year and spacing treatments. The two varieties, however, did not differ in mean diameter, height, and weight of heads.

Significant differences in yield and yield components were also observed in both locations depending on pro-duction year, irrespective of variety and spacing (Table 3). Cabbage produced at Kulumsa in 2018 and 2019 had 7.0 and 22.9% better head yields than those grown at Debre Zeit during the respective years. Moreover, the highest head diameter, head height, head weight, and number of non-wrapper leaves were observed in the cabbage grown at Kulumsa in 2018. The head weight of cabbage grown at Kulumsa was significantly bigger than those grown at Debre Zeit in both years; cabbage grown at Kulumsa had the highest (1.9 kg) head weight compared to those grown at Debre Zeit (0.86 kg) in 2019. Those grown  at  Debre  Zeit  during  the  same  year had similar head diameter and number of non-wrapper leaves as those grown at Kulumsa though they had smaller head height and weight. No significant difference in head height and weight of non-wrapper leaves were observed among the treatments. Likewise, Stoffellal and Felming (1990) reported a yield difference of 30% between two consecutive years in cabbage (cv. Bravo). Kleinhenz and Wszelaki (2003) also reported significant differences in marketable yield, head weight, head diameter, and head density between years and seasons. 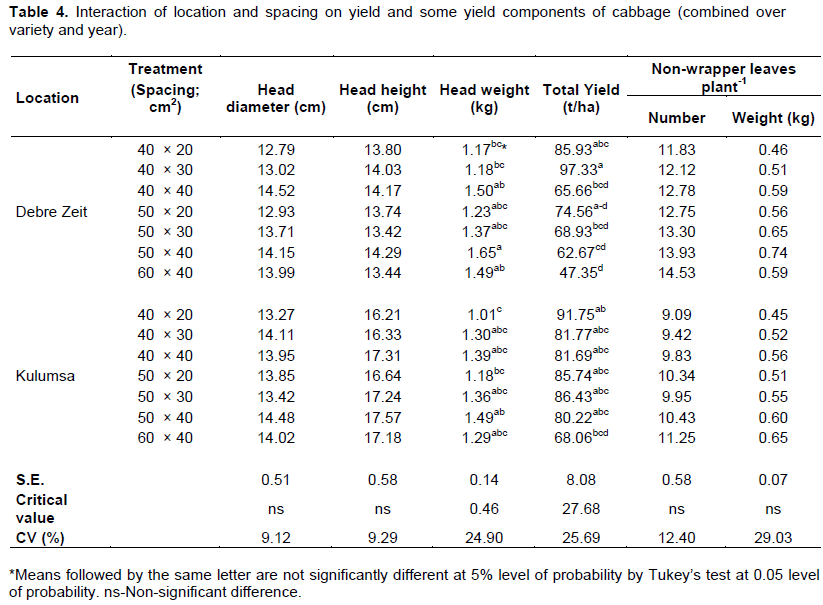 However, the cabbage plants grown in different spacings had the same head height. The results agree with that of Stoffellal and Fleming (1990) who reported that cabbage head weight increased quadratically as within row spacing increased. Uniformity among plants and head weights also increased with increase in within row spacing due to improved availability of light, nutrient and water. Barrett et al. (2015) also indicated that wider within row spacing reduced interplant competition in high-density cabbage production, thereby maximizing the proportion of marketable heads (yield). Similarly, Haque et al. (2015) recorded the highest number of loose leaves(19), weight (849 g), diameter (19 cm), and thickness (12 cm) of cabbage  head  in  wide (50 cm × 50 cm)  spacing than in narrow (50 cm × 30 cm) spacing which resulted in 14, 617 g, 16 cm, and 11 cm of the respective parameters. They attributed the better growth of plants in the wider spacing to availability of sufficient light and nutrients which led to optimum vegetative growth. The highest head weight per plant (1.65 kg) and marketable yield (66.07 t ha-1) were recorded in the wide spacing than the narrow spacing which resulted in smaller head size (1.32 kg) and yield (52.7 kg). 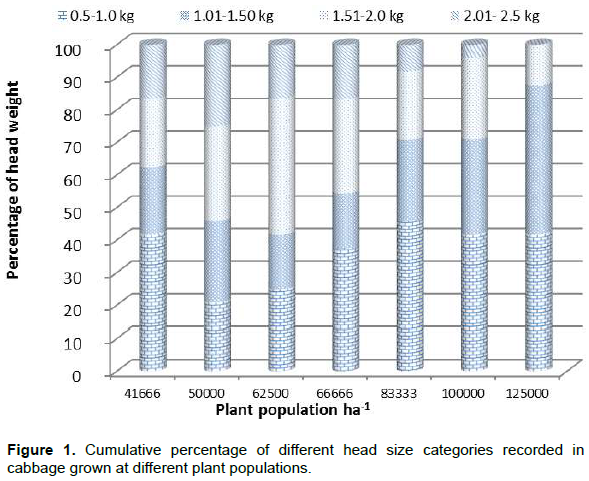 Cabbage (B. oleracea var. capitata) is one of the major vegetable crops  grown in Ethiopia. 31.4 thousand tonnes of cabbage was produced in 2018 rainy season. Despite its importance, the productivity of cabbage in Ethiopia (6 t/ha) is about five and three folds lower than that of the world (28.8 t/ha) and East Africa (16 t/ha). Low plant population was one of the causes of low productivity. Moreover, big size heads resulting from lower populations were not usually preferred by consumers and retailers. The current study was thus conducted to improve the yield and size of cabbage. The study was undertaken using two cabbage varieties commonly grown in Ethiopia and seven spacing treatments, including the control 60 cm × 40 cm, at Debre Zeit and Kulumsa during 2018 and 2019. The experiment was laid out in RCBD with three replications. Results of the experiment showed that Copenhagen Market produced the best yield (99.69 t ha-1) at 40 and 20 cm  between rows and plants, respectively; whereas Landini F1 produced the highest yield (96.9 t ha-1) at 40 cm inter and 30 cm intra-rows. The control, on the other hand, produced only 59.78 t. Better yields of both varieties were observed at Kulumsa than at Debre Zeit. Therefore, the 40 cm × 20 cm and 40 cm × 30 cm spacings are recommended for Copenhagen and Landini F1, respectively. Kulumsa is the most preferred location for growing both cabbage varieties. As the study was conducted at two locations and two varieties, it is thus, recommended to undertake further studies involving cabbage varieties with different head sizes and at different agro-ecologies.

The authors thank the Ethiopian Institute of Agricultural Research for financing the study. The Debre Zeit and Kulumsa Agricultural Research centers are also appreciated for providing the necessary logistics and support. The authors also appreciate the contribution of technical assistants and other members of  Cool  Season Vegetable Crops Program of both centers for managing the trials and collecting data.