Common bean (Phaseolus vulgaris L.) cultivation is of relevant economic importance for Brazil, since this legume is one of the main Brazilian staple foods. The objective of this study was to evaluate, in two sowing times, the agronomic performance of two bean cultivars according to foliar application of different doses of potassium silicate. Experiments were conducted under field conditions, in the rural area of the city of Assis Chateaubriand, Paraná, Brazil. The first experiment was implanted in August, 2014 (rainy season crop) and the second one was implanted in February, 2015 (dry season crop). A randomized block design was used in both experiments, in a 2 × 5 factorial design, with four replications. The first factor refers to common bean cultivars (IPR Campos Gerais and IPR Tuiuiú) and the second factor refers to the different doses of potassium silicate (0.0, 250, 500, 750 and 1000 ml ha-1). The product used contained 0.9 w/v of SiO2 (90 g L-1 of water) and 18% K2O in its formulation. The agronomic characteristics evaluated were plant height, dry matter weight of the aerial parts, amount of pods per plant, thousand grain weight, and grain yield. Foliar fertilization with potassium silicate did not influence the agronomic characteristics of common bean cultivars. Regardless of foliar application with potassium silicate, IPR Campos Gerais cultivar presented greater plant height, thousand grain weight and grain yield for rainy season crop when compared with IPR Tuiuiú cultivar, which in turn presented higher productivity in dry weather crop.

Common bean (Phaseolus vulgaris L.) is cultivated in nearly all regions of Brazil by small and large producers, in different production systems, due to its edaphoclimatic adaptation (Moura et al., 2015).  Thus, there is the importance of having a previous knowledge about soil and weather of the region in which common bean will be cultivated, as well as about the cultivation requirements and limitations, in order to choose a proper environment for plants to grow, develop and produce evenly, and to take full advantage of inputs and of benefits from other practices or technologies applied (Andrade et al., 2015).
Being a day-neutral plant, in Brazil, common bean is cultivated in three different sowing times: the first time is called "Safra das águas" (rainy season crop, or Southern and Southeastern crop); the second time is called "Safra das Secas (dry season crop, also called Second crop or Northeastern and Southeastern crop); the third time is called "Safra de outono-inverno" (fall-winter crop, also called Southeastern crop or irrigated crop) (Moura et al., 2015).
An alternative management for this leguminous plant is the adoption of foliar fertilization with some micronutrients, such as silicon (Si). The main feature of Si is to act as a plant resistance inducer, making plants more tolerant to climatic stresses and even to pest attacks and diseases. The way by which Si exerts a protective effect against pathogens and insects is still not defined (Ghanmi et al., 2004; Goussain et al., 2005). However, protection conferred to plants by Si is considered to be due to the accumulation and polymerization of this element in plant cells, creating a mechanical barrier which hinders insect pest attacks and pathogens (Yoshida et al., 1962). Silicon's role as a mechanical resistance enhancer was questioned by Menzies et al. (1991) and Samuels et al. (1991). According to Chérif et al. (1992), Si is related to specific defense reactions of plants. According to Gomes et al. (2005), this element acts as an elicitor of induced resistance mechanism in plants.
According to Marschner (1995) and Malavolta (2006), Si is characterized as a beneficial element for plants, as it confers increased resistance against pest attacks and diseases, improved photosynthetic capacity, increased number of leaves, larger stem diameter and plant size.
The use of Si in agriculture has presented a reduction of insect pest and disease incidence in host plants, since that element, when absorbed, promotes deposition of silica on cell wall, making plants more resistant to fungi and insect attack (Gomes et  al., 2009). This is only possible because silica associates with cell wall constituents, making it less accessible to degrading enzymes (mechanical resistance) of invaders. Si also acts against some fungal diseases in Si non-accumulating plants, as in the case of common bean. In this case, the action of this element is believed to occur not exclusively by mechanical barrier formation, but also by induction of phenol (phytoalexins) production (Yamada and Abdalla, 2006).
The importance of common bean in Brazil makes research of alternative means to provide increased productivity with decreased production cost necessary.
However, studies concerning management methods that employ Si are still incipient and inconclusive (Franzote et al., 2005), especially those seeking to clarify the relation between nutrition and problems caused by pests, as well as the relation of this element to agronomic aspects of the cultivation.
Thus, use of foliar fertilization with Si is believed to provide better conditions for common bean regarding the evaluated agronomic characteristics.
Therefore, the objective of this study was to evaluate, in two sowing times, the agronomic performance of two common bean cultivars according to foliar application of different doses of potassium silicate.

Experiments were conducted under field conditions, in the rural area of the city of Assis Chateaubriand, Paraná, Brazil. The first experiment was established in August 2014 (rainy season crop) and the second one was established in February 2015 (dry season crop), both in eutroferric Red Latosol. The area is located at coordinates: Latitude 24°17´27.40´´ S and Longitude 53°35´03.99´´ W, at an altitude of 321 m.
Climate data referring to the experimental management period were collected and provided by COAMO (Agro industrial Cooperative), Brasilândia do Sul branch, Paraná, located 10 km from the experimental area. These data were correlated with phenological stages of the crop, as shown in Figures 1 and 2.
A randomized block design was used in both experiments, in a 2 × 5 factorial design, with four replications. The first factor refers to common bean cultivars (IPR Campos gerais and IPR Tuiuiú) belonging to pinto and black bean groups, respectively.
The second factor refers to doses of a commercial potassium silicate product (0.0, 250, 500, 750 and 1000 ml ha-1) reported to contain 0.9 w/v of SiO2 (90 g/L water) and 18% K2O in its formulation, according to manufacturer's information. The product was diluted in humic acid. Experimental plots were 10 m long by 7.74 m wide, totaling 18 lines and 77.4 m2 total area.
Prior to the first experiment installation, soil was sampled to a depth of 0 to 20 cm, presenting the following results: P = 6.30 mg dm-3 (Mehlish-1); pH (CaCl2) = 4.80; H + Al = 3.18 cmolc dm-3; Al3+ = 0.00 cmolc dm-3; Mg2+ = 1.25 cmolc dm-3; Ca2+ = 4.05 cmolc dm-3; K+ = 0.16 cmolc dm-3; Mn = 146.49 mg dm-3; Fe = 55.72 mg dm-3; Cu = 7.62 mg dm-3; Zn = 3.28 mg dm-3; Si = 19.6 mg dm-3;  V% = 63.19; Clay = 73.5%; Coarse sand = 2.3%; Fine sand = 3.2%; Gravel = 0.0%; Silt = 21.0%; Textural class = Clayey soil.
Liming was not performed in both experiments conducted in order to avoid favoring of one experiment over another. This is because when this procedure is performed to increase soil pH, hydroxyl formation occurs in the corrected soil profile (however, a time interval is needed for such effect to occur). Thus, it could lead to an advantage for the second experiment conducted over the first one, with regard to productivity increase and other agronomic characteristics evaluated in this study.
Fertilization employed was based on soil analysis, abiding by recommendations of IAPAR (2003) for common bean culture. At the time of  planting, 300 kg ha-1 of 16-16-16 fertilizer was incorporated in the sowing groove. At the V4/R5 phenological stage, nitrogen top dressing was performed by using urea (45% N) as N source at a dose of 64 kg ha-1. 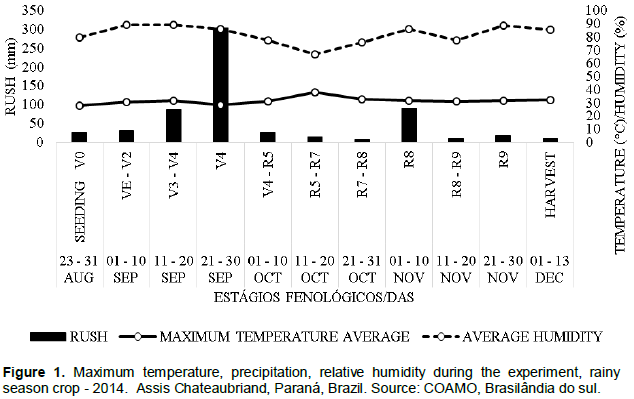 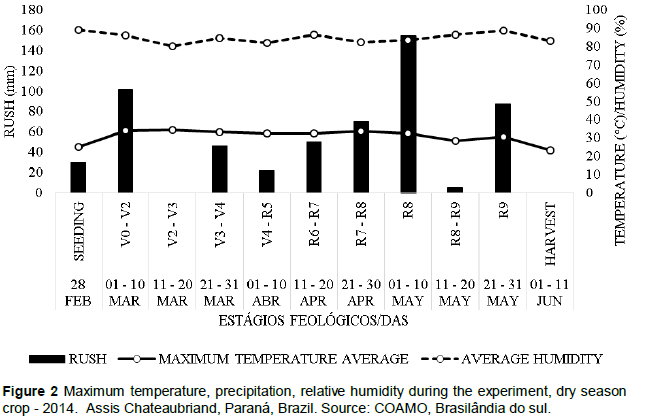 The authors would like to thank the Coordination for the Improvement of Higher Education Personnel (CAPES) and Fundação araucária (State of Parana Research Foundation) for financial support.
They would also like to thank Mr. Valdir José Alves, the owner of the area where the experiments were conducted, for all the support and consideration along the development of this study.