The cowpea has stood out on the national scene, opening up new perspectives and applications of a more suitable management to ensure quality product. Therefore, it is important to know the responsiveness to the levels of deficit and excess water in the soil. Thus, the aim of the present study was to evaluate the initial development of cowpea plants subjected to different soil water availabilities. The experiment was conducted in a greenhouse, in a completely randomized design with six water availabilities (40, 60, 80, 100, 120 and 140% of the maximum soil water holding capacity) with four replicates. Maintaining soil moisture was performed using gravimetric method. The results were submitted to analysis of variance and regression at 5% probability through Sisvar statistical program. The plant height, stem diameter, number of leaves, dry mass of shoots and roots were evaluated 35 days after implantation of the treatments. The water availabilities that provide better development and yield of cowpea BRS Nova Era stood in the range of 78.5 to 84.5% of the maximum soil water retention.

The cowpea (Vigna unguiculata (L.) Walp.) expands to the Cerrado region, in the North, Northeast and Midwest, where it is incorporated into production arrangements as second crop after soybean and rice and, in some places, as main crop (Freire, 2011). In the Cerrado region, especially when it is grown as second crop, the cowpea has a very competitive cost, a factor that has increased the interest of producers for the culture, as they may use the same practices of the previous crop. The expansion in the cowpea market opens up new perspectives and applications of a more suitable management to ensure quality product (Almeida et al., 2012).

According to Frota et al. (2008), the cowpea  has  short cycle, low water requirement and ability to fix atmospheric N through N fixing bacteria. In this context, inoculation with effective rhizobia is a viable alternative to increase the productivity of the crop supplying the N needs by plants, lowering production costs and raising the income of the producer (Chagas et al., 2010). In general, for plant development, there is need for a balance between the water amount and the space occupied by the air in the soil. Legumes are usually sensitive to flooding and it may limit their growth because the nodes need O2 to maintain the aerobic respiration necessary to supply the large amount of ATP, essential for nitrogenase activity (Thomas et al., 2005).

In contrast, the soil water deficit can affect the root respiration and have adverse effects on plant development, with stomatal closure as the main response to stress, caused by the synthesis of abscisic acid, the consequent withering of leaves and the disability of the photosynthetic process affecting growth, subsequently (Sutcliffe, 1980). Yet, the plants submitted to the deficit have their stomatal conductance affected and this reduces the photosynthetic and growth rates, resulting in decreased production of shoots and roots (Santiago et al., 2001). Thus, the aim of the present study is to evaluate the development and yield of cowpea under different soil water availabilities.

The soil correction was performed by the base saturation method, up to the level of 60%, with addition of dolomitic limestone (PRNT = 80.3%). After the limestone incorporation, the soil samples were moistened to field capacity and incubated for 30 days. The experimental design was completely randomized, with five water availabilities (40, 60, 80, 100, 120 and 140% of the maximum soil water retention) and four replicates. The maximum soil water retention capacity in the pots was maintained by the gravimetric method, according to Bonfim-Silva et al., (2011). The basic fertilization with P and K was incorporated into the soil at planting. In accordance with the chemical analysis of the soil, 110 mg dm-3 P2O5 and 50 mg dm-3 K2O were applied, using simple superphosphate and potassium chloride as sources, respectively.

The cowpea seeds (cultivar BRS Nova Era) were sown in pots and 5 days after the emergency, thinning was performed, leaving three plants per pot, which were grown for 35 days.

As a way of providing N to plants, 5 mL of the bacterial broth produced by multiplying the BR 3267 strain (Bradyrhizobium japonicum, recommended for inoculation in cowpea plants) was applied directly to the root zone of each plant. To obtain the bacterial broth, pure colonies of the rhizobia were multiplied for 24 h under constant agitation at 100 rpm in Dygs culture medium (Rodrigues et al., 1986). The water availability of all experimental plots was maintained at 80% for 15 days after germination, for plant establishment. After the application of the treatments and the stabilization of the respective availability to each treatment, two weighing of each experimental plot were performed daily to replace the water consumed by evapotranspiration, always in the early morning and late afternoon.

Thirty-five days after the implantation of treatments, it were performed the counting of leaves, the determination of height, stem diameter and the reading of chlorophyll content with chlorophyll meter. Later, cutting of shoots was performed  close  to  the  ground and the roots were sieved and washed in a 2 mm mesh to prevent any loss. The shoots and roots were packed separately in paper bags and dried in forced air circulation oven at 65 ± 5°C until constant mass. Then, this material was weighed on a precision scale to determine the dry mass of shoots and roots.

The results were submitted to analysis of variance and regression test at 5% probability, using the statistical program Sisvar (Ferreira, 2011). The variables dry mass of shoots and dry mass of roots were transformed by (X+1)0.5.

The water availabilities applied to the soil influenced all variables analyzed for cowpea. The growth of cowpea plants was directly affected by the soil water availabilities and the effects have been intensified in treatments where the plants were subjected to water stress, caused by both excess and deficit, a trend observed in all the variables analyzed. Plants reached the greatest height (29.08 cm) with 84.5% water availability, with subsequent decline. Water stress caused by the excess soil water, when compared to the maximum height obtained, it promoted 40% reduction in plant height; yet the deficit promoted a reduction of 22%, indicating the increased sensitivity of the culture in water excess conditions (Figure 1). 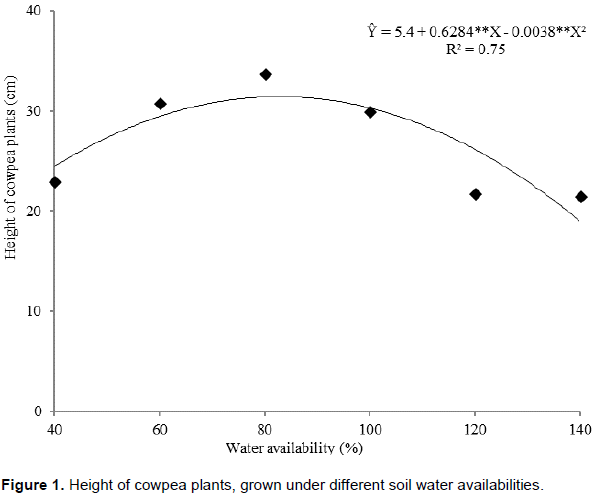 Marin and Santos (2008) evaluated the growth of pigeon pea (Cajanus cajan (L.) Mill sp.) under water deficit, found marked reduction in plant growth with increased water stress. Notwithstanding, the results found in the literature can be divergent, because in some cases there was a reduction plant height due to the fact that water stress reduces the turgor of the cells and consequently, their growth (Costa et al., 2008); just as there may be etiolation of plants when subjected to these conditions (Aguiar et al., 2008).

These results are related to the fact that the leaf growth depends mainly on the cell expansion because, once it is inhibited, there may be slowness of leaf expansion in the early development of the water deficit (Taiz and Zeiger, 2009). According to Larcher (2000), the reduction in the number of leaves of plants under water stress can be justified by increased endogenous production of hormones,  such  as  abscisic  acid and ethylene, since in the presence of these compounds there is greater senescence and leaf abscission.

Under water stress conditions, the plants have physiological responses such as liberation of abscisic acid (ABA), which is a plant hormone induced by water stress; on the plant, ABA induces the closure of the stomata, thus reducing the excess water loss by leaves and consequently the absorption of water from the roots (Shinohara et al., 2014). The lack of O2 accelerates the production of ACC (1-aminocyclopropane-1-carboxylic acid), which is the precursor of ethylene. ACC is translocated from the root to the shoot and, in the presence of O2, it is converted into ethylene, which promotes shoot elongation, epinasty, leaf abscission, senescence and chlorophyll loss (TAIZ and Zeiger, 2009).

Nascimento et al. (2011), studying the development of cowpea under different levels of soil water availability, obtained linear results working with maximum water availability of 100%. Under these conditions, these authors observed reductions in the number of leaves, when comparing the control (100% water availability) with the levels of 80, 60 and 40%, of approximately 11, 23 and 35%; showing that the culture has increased tolerance to water   deficit   during  the  growing  season,  and   hence greater sensitivity at the beginning of the reproductive period.

The reduction in the development of plants under water deficit conditions is more emphasized in the development of leaves than in the stem expansion, this is the result of a plant defense mechanism to limit water losses by transpiration (Silva et al., 2011). The results of this study prove such statements, where the reduction in the leaf production (28.1%) remained higher than in the stem diameter (19.8%). The larger stem diameter was found with the water availability of 83.9%, resulting in 4.98 mm (Figure 3).

Evaluating the tolerance of bean genotypes to drought, Gonçalves et al., (2015) observed a 21.16% reduction in the dry mass of stem in relation to plants receiving adequate irrigation, the reductions were more pronounced for the fresh mass of stem, which was reduced by 48.65% in plants subjected to water deficit. Under flooded conditions, Fante et al. (2010) reported the formation of adventitious roots and stem hypertrophy in soybean plants. The lack of oxygen for prolonged periods leads many species to develop adventitious roots, aerenchyma and to the formation of cortical or peridermal cracks in the stems, resulting from hypertrophy (Batista et al., 2008). In flooded  treatments, it  was  remarkable  the  emission  of roots in the soil surface and the crack in the stem, resulting from hypertrophy (Figure 4A and B). 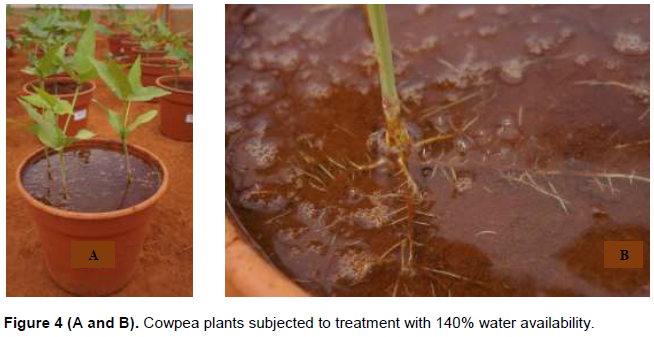 The production of dry mass of shoots of the cowpea was influenced by the soil water availabilities, being adjusted to  the  quadratic  regression  model,  where  the greatest production occurred with the soil to 80.6% of the maximum water holding capacity (Figure 5). The limitation in the growth of plants, imposed by the low availability of water, is mainly due to the reduction of carbon  balance in the plant (Flexas and Medrano, 2002). 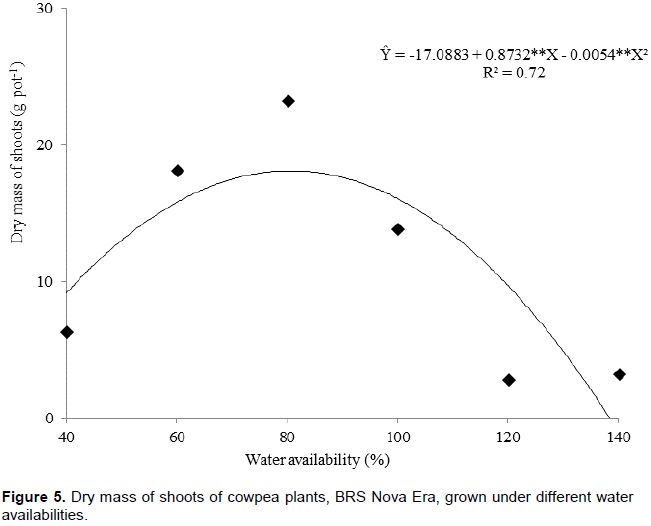 It is noteworthy that the development of cowpea plants is more affected by the excess soil water than by the deficit. Fante et al. (2010), evaluating 3 soybean cultivars (BRS 267, BRS 257 and BRS 213) under flooded conditions, observed average reduction of 55% in the production of dry mass of shoots. Under these conditions, respiration and plant metabolism are reduced because of oxygen deficiency in the soil, causing symptoms that initially appear as withering and leaf chlorosis, heading to stem hypertrophy, morpho-anatomical changes, decreased growth and root death (Kramer, 1983).

Evidencing the symptoms described, the dry mass of roots was influenced by the different water availabilities applied to the soil, reaching the maximum yield of 4.86 g pot-1 with 78.5% water availability, nonetheless, it reached the minimum point under a flooded condition (140% of the maximum water retention capacity), where there was practically no root growth (Figure 6). The water stress caused by water deficit in the treatment with 40% water availability was reduced by 36.6%, when compared to the maximum root production. Work done, especially under water stress conditions, demonstrate the sensitivity of legume species as beans (Custódio et al., 2009), peanuts (Duarte et al., 2013) and soybean (Firmano et al., 2009). The flooded condition of the soil (120 and 140% of the maximum retention capacity) provided significant reduction in the dry mass of roots. It is likely that after the application of treatments, the root system paralyzed its development, as reported by Palta et al. (2010), where root growth was paralyzed during the flooding, which resulted in a 67% reduction compared to the well-drained condition. 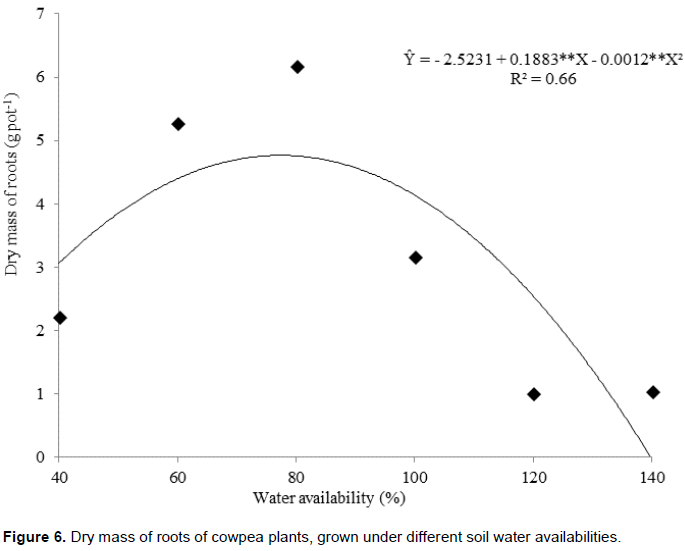 The water availabilities that provide better development and yield of cowpea, BRS Nova Era, stood in the range between 78.5-84.5% of the maximum soil water retention capacity for the development of cowpea. It was affected most by the water stress caused by excess water than by deficit conditions.

The authors are grateful to the Federal Mato Grosso University for their support during the experiment.