The study was carried out in the first and second seasons of 2015 and the first season of 2016 at Kachwekano and Kalengyere stations of Kachwekano Zonal Agricultural Research and Development Institute in Rubanda county, Kabale district. A Completely Randomised Block Design was adopted with three replications and 4 treatments. The treatments composed of T1: Control, T2: 100 kg/ha N:P:K, T: 150 kg/ha N:P:K, and T4: 200 kg/ha N:P:K. Data was analyzed using Genstat computer package 13th Edition and significant means were separated using Fisher’s Least significant difference at 5%. Application of N:P:K fertilizer enhanced the growth, yield components and total tuber yield of Kachpot1 potato variety. The highest number of haulms (3.361), plant height (48.50 cm), percentage of big tubers (86.27), yield of big tubers (91.94) and returns on investments of 1.42 were registered at an application rate of N:P:K of 200 kg/ha. The research revealed that, application of N:P:K fertilizer improves the yield and profitability of Kachpot1 potato variety.

In Uganda, potato is grown by small holder households that produce a total of 169,490 tonnes on 39,107 ha (FAOSTAT, 2007). The major producing areas are the highlands of South Western Uganda, comprising Kabale, Kanungu, Rubanda, Rukiga and Kisoro districts accounting for 60% of total national production (Aheisibwe et  al.,  2015).  Other  producing  areas  are   Kapchorwa,

Sironko and Mbale districts on the slopes of Mt. Elgon in the East and Nebbi district in the North West. Averagely, on farm potato yields has been reported at 4.3 tonnes/ha (FAOSTAT, 2007) which is very far below 20 tonnes reported for developing countries (Muthoni and Nyamongo, 2009). The low yield is attributed to use of poor quality seed, pests and diseases, low soil fertility among others.

It is worth noting that, different potato varieties have been bred and released with more focus on yield and adaptability than nutrient requirements. Among the varieties that have been bred by National Agricultural Research Organisation is Kachpot1 with very good processing qualities for crisps, tolerant to low soil moisture levels, attractive market potential but with low yield response. The low yields could be due to limited information on the nutrient requirements by the variety.  Invariably, each cultivar has specific morphological and developmental characteristics that may cause differences in nutrient uptake and utilisation (Downs and Hellmers, 1975).  Different nutrients perform different functions during crop growth cycle. For example, Westermann (2005) and Kavvadias et al. (2012) show that N is essential for protein synthesis and growth of tubers, although excess N may result in excessive vegetative growth at the expense of tuberisation (Ruza et al., 2013). Phosphorus promotes root growth, rapid formation of tubers and starch synthesis (Rosen et al., 2014), while Potassium is essential for translocation of sugars to the tubers and also starch synthesis a fundamental processes in tuber growth and filling (Reis and Monnerat, 2000). Muzira et al. (2005) assert that, potato yield and yield components increased with increase in NPK fertiliser rates. However, there is little information on the effect of different NPK combinations on growth and yield of Kachpot1. Therefore, the study investigated the effect of NPK fertilizer combinations on Kachpot1 yield and profitability using different NPK fertilizer rates.

On station experiment was carried out in the first and second seasons of 2015 and first season of 2016.

The experiment was established at Kachwekano Agricultural Research and Development Institute (2250 masl) and Kalengyere (2450 masl). Four fertilizer levels: 0, 100, 150 and 200 kg/ha of N, P and K were used and the fertilizer source NPK 17:17:17 was applied as basal. Sprouted medium sized (45-60 mm) diameter tubers of Kachpot1 variety were planted at a spacing of 70 cm between rows, 30 cm between plants on a plot size of 2.8 m×3 m. A completely Randomized Block design was adopted. Late blight disease was controlled using Mancozeb and Ridomilat a rate of 2.5 kg/ha on a monitor and spray basis. All other recommended agronomic practices were considered. At physiological maturity (when leaves turned yellow) data on haulm numbers per plant and plant height was collected. Ten plants from two middle rows per plot were used to collect data on haulm numbers and plant height. At harvest, plants from two middle rows were counted and recorded per plot. Tubers from all plants were lifted using a hand hoe, bulked together and graded. Two tuber grade sizes were considered, that is, small (>30 mm diameter) and big (<30 mm diameter). Tubers from each grade size were counted, weighed, recorded for further analysis. Data was subjected to Analysis of variance using Genstat computer package 13th Edition. Means were compared and separated using Fisher’s Least Significant Difference at 5%.

Effect of application of NPK fertilizer on haulms and plant height

However, there was no significant difference in tuber yield when 150 and 100 kg NPK ha-1 were applied. In addition, the percentage number of big tubers increased with increase in the application rate with 86.27% observed under NPK applied at 200 kg ha-1 and the lowest 73.9% obtained under the control treatment (Table 2).

Significant (P<0.001) difference were also observed across the three seasons (Figure 1). In the same study, correlations between number of haulms per plant, plant height and yields with fertilizer application rates in kg ha-1 revealed strong linear relationships of 91, 98 and 98%, respectively (Figures 2 and 3). 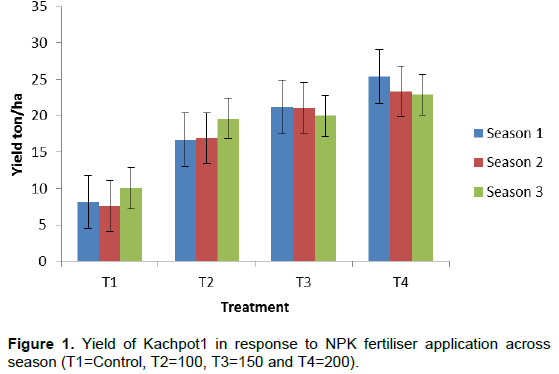 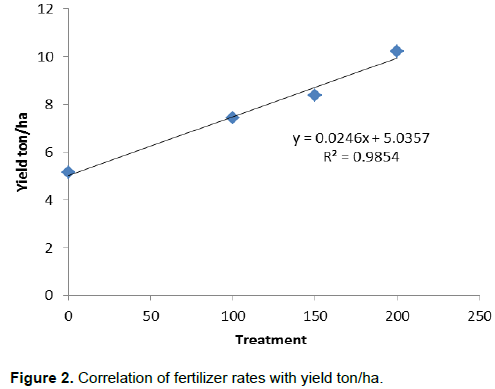 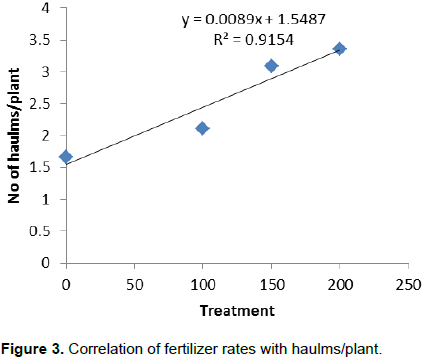 In the  current  study,  the  highest  returns on investment were realised at the highest application rate of 200 kg ha-1 of NPK (1.42) and the lowest was recorded in treatment without fertilizer (0.45). However, application of fertiliser at the rates of 100 kg of NPK ha-1 and 150 kgha-1 also resulted in positive responses (1.18 and 1.28), respectively.

The study that was set out to improve productivity of Kachpot1 using fertilizer met its expectations. Indeed fertilizer application, irrespective of the level/rate significantly  increased yield in terms of yield components (haulms per plant and plant height), tuber attributes (size) and overall yield (t ha-1) with a corresponding monetary gain.

Number of haulms and plant height

Superior results in plant height on fertilizer treatments may be due to higher N concentration which is an essential element for cell division, cell enlargement and it also increases the protoplasm activity.

The increase in plant nitrogen concentration could have stimulated the assimilation of carbohydrates and proteins, which in turn enhanced cell division and formation of more tissues that resulted in higher vegetative growth of plants. Similar results were revealed by Dangi et al. (2018) where the highest plant height (30, 60 and 90 DAS) was achieved at the highest application rate of 100% NPK. Increasing levels of nutrients increased plant height by 15 to 42% as compared to zero level. This is because relatively high dose of nitrogen application results in vigorous growth of the plant (Adhikari, 2009). Nitrogen being an essential constituent of protoplasm is vitally associated with the activity of every living cell. In the present investigation nitrogen application has a profound effect on different biomedical attributes of potato. The supply of nitrogen is related to carbohydrate utilization. When nitrogen supply is adequate and conditions are favorable for plant growth, proteins are formed from the manufactured carbohydrates. This extra protein allows the plants to grow faster. Thus, height of plant was significantly increased by increasing levels of nitrogen.

The higher number of tubers may be due to increased absorption of nutrients in higher level of recommended dose of fertilizer which would have increased photosynthetic activity as well as translocation of photosynthasates for formation of new tubers. This is in conformity with a study conducted by Babaji et al. (2009) where application of NPK increased tuber numbers. Nizamuddin et al. (2003) reported an increase in yield of marketable tubers on application of NPK. Nitrogen affects tuber formation in potato by influencing the activity and phytohormone balance in the plants, especially on the levels of gibberellic acid, abscisic acids and cytokinins. Potassium application significantly (P<0.001) affected tuber yield compared with treatments without K fertilization (Table 3). Similar studies by Haile (2011), were observed whereby application of K increased tuber size and quality.

Tuber numbers increased with increased application of NPK. Phosphate availability at tuber initiation is important to ensure maximum tuber set, especially if tuber numbers need to be increased for certain varieties, or where the market demands a large number of smaller tubers.

Further phosphate availability at tuber initiation is important to ensure maximum tuber set, especially if tuber numbers need to be increased for certain varieties, or where the market demands a large number of smaller tubers especially for seed production.

In this study, potato yield depicted a linear relationship with increase in the level of fertilizer rate. Also tuber weight increased with increase in NPK application rate. Similar results were reported by Dangi et al. (2018) whereby the maximum average weight of tubers per plant was obtained when a higher rate of 100% NPK was applied. Akinpelu et al. (2011) observed the highest yield of 3.81 t ha-1 on application of 200 kg ha-1 of NPK (15:15:15). The genotype and stems (haulms) per hill are some of the factors that influence the number of tubers per plant (Protocol, 2009). Similar results were reported by Etiang et al. (2018) in which an increase in potato yields and yield components were registered with a corresponding increase in NPK fertilizer.

Fertilizer application improved Kachpot1 productivity especially in terms of tuber numbers and sizes. The highest return on investment was obtained when 200 kg NPK ha-1 was applied and lowest when no fertilizer was applied. Growing Kachpot1 potato variety without fertiliser is not profitable as the return on investment was 0.45, which is far below 1. In a related study by Alemayehu et al. (2018), higher benefits were generally observed from nitrogen and phosphorus application than the control. Rware et al. (2016), Shaaban and Kisetu (2014) and Li et al. (2015) also appreciated NPK fertilizer optimization for better returns to investment.

Application of NPK at 200 kgha-1 increases the yield of Kachpot1 to 24.37 ton/ha with a corresponding higher returns to investment. Application of 200 kg of NPK kgha-1 gave the best results in terms of plant height, tuber numbers and tuber size. Further research should be done to explore other rates for the purpose of obtaining the optimum fertilizer rate needed to produce Kachpot1potato variety more economically.

Application of N:P:K fertiliser at a rate of 200 kg/ha should be more effective as it gave the highest yield and most economically feasible.

More studies focusing on  the  optimum  NPK  application rate on the variety should be conducted since the breakeven point had not be attained in the current study. Similarly, the study did not evaluate the environmental effects of the applied treatments.