Despite the shortage of water resources be evident worldwide, turning prosperous lands into unproductive and affecting the existence of humidity, there is a great fraction of producers who still do not implement the proper management of the irrigation water in their properties. The poor management of irrigation is still a reality for most of the producers located in Brazil Middle Cerrado, which continue irrigating the tomato crop using empirical methods, resulting in economic, environmental and social damage. Therefore, the objective of this study was to evaluate the influence of different irrigation depths and different times of suspension in irrigation during the ripening stage in tomato in productivity and quality of fruit for processing. The experiment was conducted under a Center pivot irrigation system and a split plot experimental design. The study showed that the higher irrigation depth (100% of ETc) resulted in higher yield (104 t ha-1) with lower soluble solids. The irrigation suspension at the beginning of fruit maturation increased soluble solids accumulation (4.2°Brix), providing higher quality and production of fruits to tomato industry.

The tomato (Solanum lycopersicum L.) has a great economic importance because its dual purpose. This vegetable can be freshly consumed or used for industrial processing, being one of the main consumed vegetables in the world. In 2012, Brazil occupied the ninth position in the world ranking of producers of tomato, producing about 3.8 million tons in an area of 55.5 thousands hectares, approximately (Agrianual, 2015).

The crop cycle of tomato in the Middle Cerrado of Brazil lasts on average, 115 days. According to Marouelli et al. (2012), the consumption of water during the development cycle of tomato is between 300 and 650 mm. Analyzing the irrigation in tomato for processing, Silva and Marouelli (1999) found that productivity increased by 25% when the irrigation management was carried out by monitoring soil moisture with neutron probe and, or, based on the crop evapotranspiration.

The anticipation in irrigation withholding has been reported by some authors (Marouelli and Silva, 1993; May, 1998) as alternatives to minimize the occurrence of bacterial and fungal diseases and reduce the rotting and disuniformity of fruits during ripening. This advance also contributes to the increasing of total soluble solids levels and enhance the efficiency of water use during the cultivation of tomato, mainly in sprinkler irrigation system.

The fruiting stage in tomato is considered the most sensitive stage to the deficit of water in soil. In this stage, an inadequate irrigation management can compromise productivity and quality of fruits (Marouelli et al., 1991; Prietro, 1997).

The hydric deficit during the maturation favors the increase of the total soluble solids content of fruits in tomato. In order to improve the quality of fruits, the management of irrigation should occasion a gradual reduction in the volume of the water applied from the ripening onset until the complete suspension of irrigation before harvest (Cahn et al., 2002).

It is important that the optimal time of suspension in the irrigation and the time of irrigation with deficit at the maturation of fruits be caried out in a local scale, considering the specific conditions of each region (Marouelli and Silva, 2009). This because the irrigation strategy in the maturation phase is dependent on various factors such as soil water holding capacity; if the cultivated genotypes are cultivar or hybrids; the effective depth of the root system; the irrigation system as well as the atmospheric evaporative demand (Marouelli and Silva, 2000; Lopez et al., 2001).

The reduced availability (López-Mata et al., 2010; Li et al., 2015) and global concern about water resources make necessary the adoption of strategies for the reduction of water use without reducing crop yields (Navarro et al., 2015). The water use efficiency (WUE) index can be used to plan and take decisions on irrigation (Karatas et al., 2009).

Considering all of these aspects, this study was caried out aiming to evaluate the influence of different irrigation depths and times of suspension of irrigation during the ripening stage of tomato, in productivity and quality of fruit for processing.

The experiment was conducted in the municipality of Cristalina / GO, at an altitude of 922 m, latitude 16° 20 'S and longitude 47° 32' W, in 2009. The soil is classified as a red latosol, clayey-gravel texture (gravel above 50% in weight). In the Unified Soil Classification System (USCS), the soil texture is classified as GW (coarse gravel> 50%). It were caried out physical-hydric analyzes of the soil and the results are shown in the Table 1. 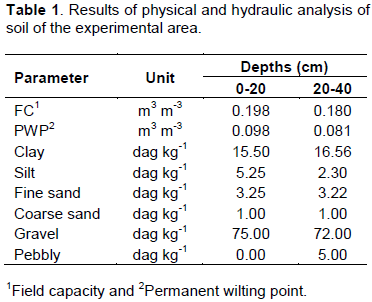 The tomato seedlings of the hybrid UG 8169 were purchased from reputable nurseries located in the region of the experiment and transplanted on 03/09/2009, with the harvest being held on 07/19/2009. The seedlings transplant was performed using the double rows system, with 1.2 and 0.6 m between rows and 0.3 m between plants, with a total population of 37,037 plants per hectare. The cultural management such as pest and disease control was performed weekly by applying the application of insecticides and fungicides, respectively.

Irrigation was carried out using a center pivot system, having a Christiansen Uniformity Coefficient of 90% (Moazed et al., 2010). The irrigation depth was calculated using a water balance, wherein the water inlet was by irrigation and the water output by the crop evapotranspiration (ETc). The following equations proposed by Allen et al. (1998) were used to estimate the evapotranspiration.

The mean values of Ks and Ke during the crop cycle are shown in Figure 1. 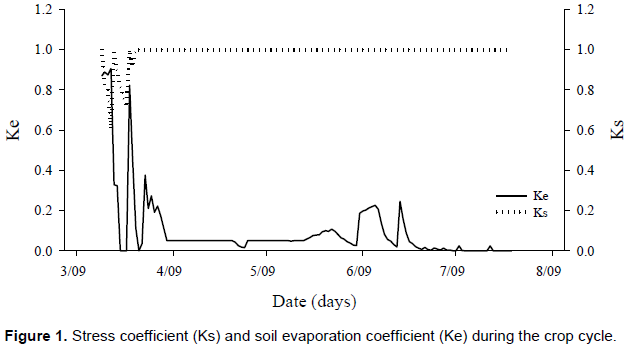 The crop cycle was divided into phenological stages based on the growth period, also known as vegetative period, related to the shading area where each stage assumed different basal crop coefficients (Kcb). This was necessary because the characteristics of the crop stages and edaphoclimatic conditions affect the values of Kcb in tomato (Allen and Pereira, 2009).

The first stage started after seedlings transplantation and extended until the point in which about 5% of the area was covered by the crop, which corresponded to a period of 10 days. The second stage, lasting 43 days, was completed when the crop covered about 100% of the area. The third stage of the crop began when 100% of the area wascovered and lasted until the beginning of fruit ripening, lasting 45 days. The last phase, with 20 days, started  from  the  ripening  of  fruits  and  finished   with   the   fruits harvesting.

As shown in Figure 2, the average temperature and precipitation during the experimental period were 20.9°C and 519.4 mm, respectively. The temperature during the cultivation remained in the recommended range for tomato (Ohnishi et al, 2010; Tarchoun et al., 2012.). 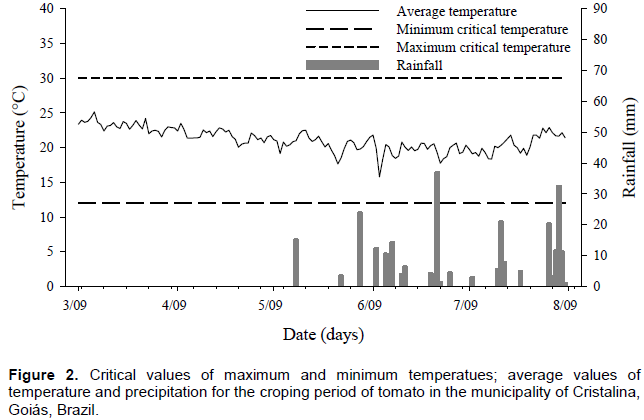 The average values of solar radiation and air relative humidity during the experiment were 17.7 MJ m-2 and 70%, respectively and can be observed in Figure 3. 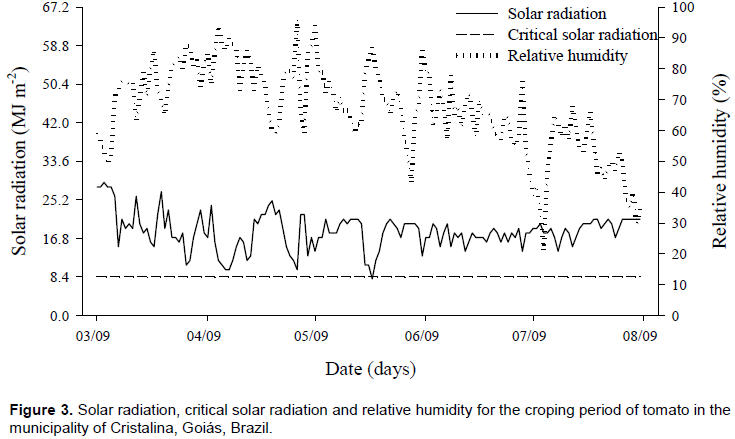 For the evaluation of fruits, it were evaluated eight  central  plants of each replication, totalizing a useful area of 1.08 m2. The fruits were divided into commercial and rotten fruits, followed by the percentages of each class in relation to the total yield of fruits. The pulp yield was estimated based on the yield of commercial fruits and 0Brix of each treatment, according to the equation bellow.

The TSSC of ripe fruits was determined using a digital refractometer for measures from 0 to 45 °Brix. This appliance is recommended for the determination of sugar in concentrated fruit juices and canned products using sugar infusion. For this evaluation, a sample was collected from 100 fruits per replication, which was triturated using an industrial blender, followed by the °Brix measurement.

Each experimental plot consisted of a double row of plants, 3.0 m long, totaling 20 plants. The experimental data was analyzed by variance analysis and regression. For the qualitative factor (Irrigation suspension), the means were compared using the Tukey test at 5 and 10% of probability. For the quantitative factor (irrigation depths), the models were chosen based on the significance of the regression coefficients using the "t" test at 1 and 5% of probability.

As shown in Figure 4, it is observed that the yield of ripe fruit linearly increased upon the increasing of the irrigation depth. The highest productivity (104 t ha-1) was obtained by applying the irrigation depth corresponding to 100% of the ETc (650 mm). Singh et al. (2009), also obtained one highest productivity (42.2 t ha-1) by applying 100% of the crop evapotranspiration, based on the class A pan evaporation. 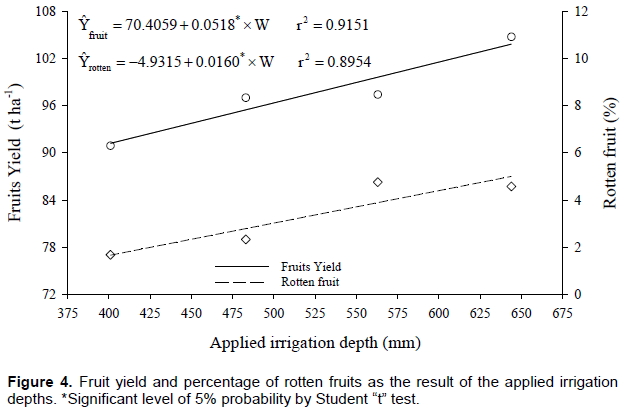 Analyzing the yield of tomato as a function of CO2 injection and six irrigation depths, Carraro and Duarte (2002), observed that the maximum yield of fruit, without CO2 application, was obtained by applying the irrigation depth of 335.2 mm.

The results show that the application of higher irrigations depths resulted in higher productivity. This increasing in productivity associated with the increase in the irrigation depths can be related to the reduction of abortion of flowers and fruits, result in in lower abortion of fruits and higher pollen viability in the flowering and beginning of the fruiting stage. However, in the water deficit condition, there was a decrease in size and number of fruits per plant, which compromised the fruit yield (Marouelli and Silva, 2006).

Marouelli et al. (2012) elucidated that the occurrence of water deficit, even when moderate, reduces fruit size, compromising productivity. The occurrence of severe water deficit can reduce pollen viability and the number of fruits per plant, besides causing physiological damage, such as blossom-end rot.

The rotting of fruits might have resulted from a higher exposure of fruits to the wet surface of soil and was aggravated by the use of sprinkler irrigation. The rotting of fruits might also have been aggravated due a higher vegetative growing of the aerial part, which developed in an environment with higher humidity between plants. Under these conditions, the environment may have favored the appearance of fungal and bacterial diseases such as Rhizoctonia and soft rot, respectively (Marouelli et al., 2007). 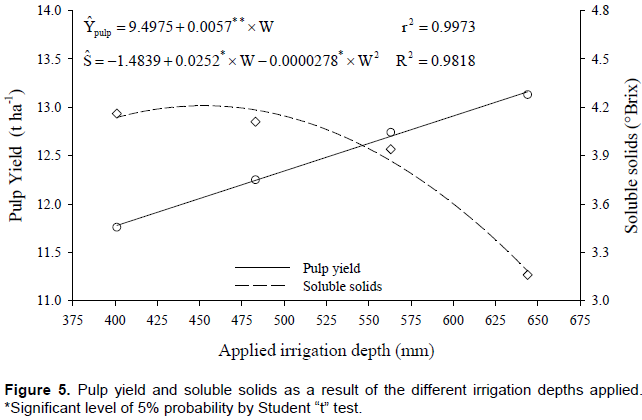 The TSSC of fruits is directly influenced by climatic conditions, genetic constitution, maturation stage (Javanmardi and Kubota, 2006) and irrigation (Dumas et al., 2003). A high availability of water to plants during the ripening stage may have a  negative  effect  on  TSSC  of fruits. A higher availability of water during the ripening stage can reduce the amount of sugars in fruits, increasing the cost of their dehydration during the production of tomato paste (Hanson et al., 2006). 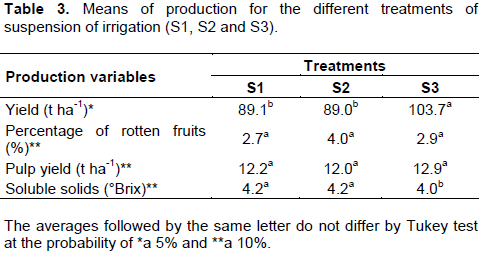 This trend can be explained by the greater water availability to plants during their cycle. These factors resulted in the production of bigger fruits and lower losses due the abortion of flowers and fruits, resulting in higher productivities (Pires et al., 2009).

The management of irrigation suspension should be caried out at the proper time in order to obtain a good row material for processing (Cahn et al., 2002). The lower TSSC obtained from the S3 treatment results from the application of irrigation during almost the entire crop cycle.