Groundnut (Arachis hypogea L.) is a major source of dietary protein, cultivated for both human and animal consumption. However, in West Africa, the yields are low, renewing the interest to evaluate groundnut response to P fertilizer (P) and rhizobium inoculant (IR) application. A study was conducted on the experimental field of the University for Development Studies, Nyankpala in the Northern region of Ghana to evaluate the interactive effect of three P rates (0, 30 and 60 kg P2O5/ha) and three IR rates (0, 3 and 6 g/kg seed) on groundnut yield and to assess the economic viability of these technologies to farmers. The study was conducted using a 3 × 3 factorial laid out in a randomized complete block design with three replications. Nodule count and pod number per plant were significantly affected by P fertilizer rates (PR) and rhizobium inoculant rates (IR) interaction. The effects of PR and IR significantly increased grain yield of groundnut, with 60 kg P2O5/ha and 6g inoculant/kg seed recording the highest grain yield of 2708.3 and 2376.6 kg/ha respectively. Correlation analysis suggested that major determinants of groundnut grain yield were nodule count, effective nodule count, pod number and pod weight. Gross benefits were higher in treatment with P fertilizer and/or inoculant application. Estimated B/C ratios also indicated that, compared to the control, all the treatments are attractive. Therefore, cultivating groundnut by using P fertilizer and/or inoculant may provide the most economically viable and low-risk options for increasing groundnut yield in northern Ghana.

Groundnut (Arachis hypogea L.) is a major grain legume in the world, cultivated for both human and animal consumption (Dapaah et al., 2014). Its seed is a major source of protein (12-30%) and oil (36-54%) for both rural and urban settlers  in  Sub-Saharan  Africa  (Naab  et  al., 2009). According to the Food and Agriculture Organization (FAO) estimate for 2018, 28.5 million hectares of peanut were harvested worldwide of which West African sub-region harvested 7.1 million ha (www.FAOSTAT.org). Despite its importance, the average yield of  groundnut in  West Africa is estimated to be 1.1 t/ha. Several biophysical and socio-economic factors; including low and declining soil fertility, high cost and/or unavailability of inputs (seed, fertilizer, inoculant) and use of low yielding varieties are often cited as the major causes of the low yield of groundnut.

Low and declining soil fertility, especially phosphorus (P) deficiency, in smallholder groundnut farms has been described as the fundamental biophysical factor responsible for the declining yield in Sub-Saharan Africa (Naab et al., 2009). Although groundnut can fix their own nitrogen, they often need P for enhanced seed formation (Asiedu et al., 2000). Some authors (Naab et al. 2005; Kamanga 2010) have reported a significant yield response of groundnut to P application. Despite, these benefits, results from various studies on the optimum application rate of P to enhance groundnut yield proves to be inconsistent. For instance, studies by Mouri et al. (2018) reported higher yields with P rate at 60 kg P2O5/ha whiles Taruvinga (2014) found no significant effect when P rate was increased beyond 45 kg P2O5/ha. Therefore, this has renewed the interest for further studies.

Inoculation using Rhizobia strains has been identified as one of the most successful strategies employed to enhance symbiotic N-fixation by legume (Amba et al., 2013). It has been reported that, leguminous plant with symbiotic nitrogen fixing bacteria are able to fix about 15 - 210 kg/ha of nitrogen per season (Dakora and Keya, 1997). Thus, the inoculation of peanut with appropriate rate of rhizobium inoculant can be a beneficial strategy to improve peanut productivity. However, peanut response to inoculation has been inconsistent (Sharma et al., 2011), as survival and effective functioning of rhizobia population are reduced by high soil temperature, salt, soil acidity and nutrient deficiency (Zahran, 1999). Therefore, the full potential of the symbiotic system may be realized by increasing the number of effective rhizobia. Consequently, Deaker et al. (2004) demonstrated that, increasing number of effective rhizobia per seed application of inoculants improves nodulation and yield.

Previous studies on groundnut with P rate and rhizobium inoculant application only covered information on yield components and yield with little or no data on their economic viability. The objective of this study was therefore to evaluate the interactive effect of phosphorus and rhizobium inoculant rates on the performance of groundnut and assess the economic viability of P and inoculant application to guide farmer’s adoption.

Field experiment was conducted during the 2018 cropping season at the University for Development Studies experimental field at Nyankpala in the Northern Region of Ghana, located at latitude 9.40980° N; longitude 0.98654° W at altitude 183 m above sea level. The area experiences a  unimodal  annual  rainfall  of  800  to 1200 mm which occurs from May to October. The mean monthly minimum and maximum temperature ranges between 21 and 34.1°C respectively.

Seed inoculation was performed just before planting by weighing 1 kg of seed into a plastic container and adding 10 ml of dissolved gum Arabic solution as sticker. The seeds and gum Arabic solution were mixed thoroughly and 10 g of Nodumax inoculant was applied to the seed and mixed thoroughly to ensure that all the seed were effectively covered with the inoculant.  The groundnut was then planted at 1 seed/hill. Weed was controlled manually at 3 and 6 weeks after sowing (WAS) to avoid weeds build up to critical infestations levels as suggested by Priya et al. (2013).

Plant height and nodulation assessment were determined 8 weeks after sowing. For nodulation assessment, 5 plants outside the two centre rows were randomly uprooted from each plot. The roots were carefully washed with water inside a bowl to loosen adhering soil. The nodules were then removed, counted and dissected to determine nodule number and effective nodule number. At physiological maturity, 5 plants from the two centre rows of each plot were randomly selected for pod weight and count. The total weight and average number of pods were then calculated for each plot. The grain yield was measured from the two centre rows of each plot (3.2 m2). The pods were stripped, sun dried and shelled to measure grain yield.

Data on cost of production and price of the grain after harvest were collected to estimate the total income of the output. The total cost of production constituted cost of land preparation, seed, fertilizer, inoculant and labour. Price of groundnut seed, P fertilizer and inoculant were as purchased in the study area. Cost of ploughing and harrowing were as charge by operators in the area while labour payment was valued at the daily wage rate of hired farm labourers. Grain yield price was determined by the market price at the nearest market (Tamale) during harvest (2018).The profit or marginal net return (MNR) was computed for each treatment as follows:

Where Y is grain yield of groundnut (kg/ha), P is selling price of groundnut grain at harvest and TVC is the cost of inputs related to the treatment. The marginal rate of return (MRR) for each treatment was calculated as follows:

The General Linear Model of the Statistix 10 Analytical Package (2013) for windows was used to analyse data on growth, yield components and yield. Duncan Multiple Range Test was used to separate treatment means of significance level at 5% probability level. However, the economic benefit of groundnut production was not statistically analysed. Correlation analysis was performed to determine relationship among growth, nodulation, podding   capacity   and    grain    yield.    Parameters   with correlation values of 0.50 and above were considered to be best fitted and less than 0.50 considered non-best fit. Linear regression was used to determine predictive equations among correlated variables. 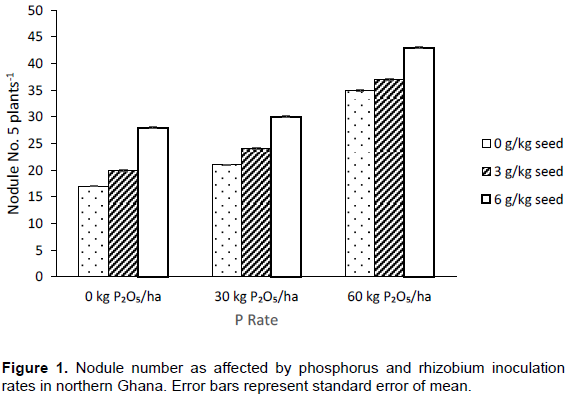 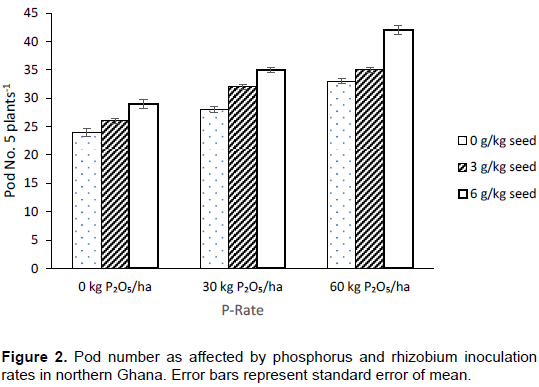 Nodulation plays important role in nitrogen (N) fixation by leguminous crop. In this study, the significant interaction effect of PR x IR on nodule count could possibly be due to the effectiveness of the P fertilizer rate in providing energy source (ATP) for rhizobium to enhance its nodule formation activity. This result concurs with earlier reports that P applied in combination with rhizobium inoculant increases nodule number per plant (Badar et al., 2015). Similarly, the number of effective nodules was significantly influenced by PR and IR effects. This finding indicates that the ability of peanut to nodulate and further produce effective nodules can also be influenced by the application of either P fertilizer rates or rhizobium inoculant rates.

The significant effect of PR x IR interaction on pod number could be attributed to the synergistic effect of PR and IR on pod formation. The increase in pod number with PR and IR application supports earlier reports that integrated application of P fertilizer and rhizobium inoculant result in improved soil productivity because of the supply of P for improved N fixation by the bacteria. Conversely, in spite of the increased number of pods, pod weight was not significantly affected by PR x IR interaction. The failure of higher pod number to translate into pod weight could be due to poor pod filling, encountered as a result of drought during the pod filling stage. Pod filling in legumes tends to be ineffective under extreme drought conditions (Schulz and Thelen, 2008).

Although the interactive effect of PR x IR was not significant on grain yield, the effects of PR and IR significantly contributed to grain yield. This result suggests that the use of either P fertilizer or rhizobium inoculant is very important for groundnut production. This finding is in agreement with earlier observations made by Ikenganyia et al. (2017) that phosphorus and rhizobium inoculant impact positively on grain yield.

Results show that P fertilizer rates combined with rhizobium inoculant rates has a significant influence on nodule number and pod number. P rate at 60 kgP2O5/ha and rhizobium inoculant rate at 6 g/kg seed combined to promote the best nodule and pod number. The application of either P fertilizer or inoculant affected groundnut grain yield significantly. Higher grain yields were observed in groundnut sown with either 60 kg P2O5/ha or 6 g/kg seed. Gross and net benefits were all higher in treatment with P fertilizer and/or inoculant application. Estimated B/C ratios also indicated that, compared to the control, all the treatments are attractive. Therefore, cultivating groundnut by using P fertilizer and/or inoculant may provide economically viable and low-risk options for increasing groundnut yield in northern Ghana.

Collaborative staff, field and data collection support from the Department of Agronomy, University for Development Studies is greatly appreciated.