Onion is the most important spice crops in Banglaesh. However,  the  production  of  this  crop  is  hampered   in coastal soil of southern districts of Banladesh. Tidal flash of  sea  water  increases  soil  salinity  which  is  a   major environmental stress affecting plants growth and productivity of the crop. In plants, salinity causes oxidative stress by producing reactive oxygen species () such as superoxide radicals (O2•-), singlet oxygen (O2), hydroxyl radicals (•OH) and H2O2 (Hasegawa et al., 2000; Apel and Hirt, 2004). Higher causes damage to cell organells like proteins, lipids, pigments and carbohydrates which ultimately lead to cell death (Apel and Hirt, 2004; Gill and Tujeta, 2010). Conversely, higher methylglyoxal (MG) production under salinity causes potential damage to the cell organells (Yadav et al., 2005a, b). Hence, higher concentration of ROS and MG under stress is essentially needed to be reduced in cell, to survive and grow.
To survive under such situation, plants hold antioxidant system in cell to reduce the oxidative damage by ROS (Gill and Tujeta, 2010). Plants have both enzymatic and non-enzymatic antioxidants which take part in scavenging of ROS produced during various environmental stresses. Among the enzymatic antioxidant in plants, superoxide dismutase (SOD), catalase (CAT), glutathione peroxidase (GPX), glutathione S-transferase (GST), ascorbate peroxidase (APX), monodehydroascorbate reductase (MDHAR), dehydroascorbate reductase (DHAR) and glutathione reductase (GR) are important. On the other hand, non-enzymatic antioxidants like ascorbic acid (ASA) and reduced glutathione (GSH) play important role in maintaining the enzymatic activities (Rohman et al., 2016; Gill and Tujeta, 2010). Alternatively, glyoxalase-I (Gly-I) and glyoxalase-II (Gly-II) detoxify MG in cell (Yadav et al., 2005b). It has been repeatedly reported that, enzymes both the antioxidant and glyoxalase system are important to lessen the toxicity of ROS and MG under stress (Singla-Pareek et al., 2008; Noctor et al., 2012; Saxena et al., 2011).
Spermidine, a triamine of polyamine (PA) group, plays important role in growth and development of plants (Martin-Tanguy, 2001). PAs are also well known for their antioxidant properties as well as their cell membrane stability (Zhao and Yang, 2008). Due to cationic nature, PAs are reported to stabilize protein, DNA and lipids of cell membrane (Bouchereau et al., 1999). In addition, they have been reported to have defensive role under abiotic stresses (Alcázar et al., 2006). Importantly, cellular level of PAs shows positive correlation with plant tolerance towards environmental stresses (Nada et al., 2004; He et al., 2002; Shen et al., 2000; Roy and Ghosh, 1996; Besford et al., 1993; Krishnamurthy and Bhagwat et al., 1989). Yiu et al. (2008) reported Spd mediated higher activities of antioxidant enzymes in welsh onion (Allium fistulosum L.), under submerged condition.
Previously, enhanced activities of glyoxalases and GSTs in onion (Allium cepa L.) by exogenous Spd under salinity were reported, where the activities of the enzymes were upregulated with lower MG content (Islam et al., 2016). Therefore, exogenous Spd might have important role in reducing of ROS and regulating of related physiological activities under salinity. Considering these, we applied exogenous Spd to examine its role in maintaining ROS and related physiological activities, by measuring enzymatic and non-enzymatic antioxidants in onion under saline stress.

Plant material and stress treatment
Seedlings of two months old (Allium cepa L. var BARI Piaj-3) were used as plant material. They were grown in plastic bucket (30 L), under green house of Bangladesh Agricultural Research Institute (BARI), and the seedlings were imposed to salinity stress by adding NaCl saline solution (10 gL-1). An EC meter (Hanna 993310) was used to measure salinity level. Spermidine at 100 μM concentration was sprayed twice daily. Saline was added until the level became 16 dSm-1, to attain salinity level of 16 dSm-1.
When the salinity level attained 16 dSm-1, addition of both saline water and Spd was stopped, and salinity duration was counted. Soil surface was sealed with polythene to maintain the soil moisture. This condition was maintained for seven days. A control without salinity and Spd was maintained under same condition. Data were measused at 1, 3, 5 and 7 days of stress, in fully expanded leaves on different parameters.
Measurement of relative water content
Relative water content (RWC) was calculated according to the method of Barrs and Weatherley (1962). Data on fresh weight (FW), turgid weight (TW) and dry weight (DW) of leaves were recorded. The below formula was used to calculate RWC:

Measurement of O2•− generation rate and H2O2
Superoxide radical generation rate was measured according to Rohman et al. (2016). Method of Yu et al. (2003) was used in measuring H2O2.
Measurement of lipid peroxidation
Heath and Packer (1968) method was monitored to measure the level of lipid peroxidation, which was assayed as melondialdehyde (MDA), a peroxidation product of polyunsaturated fatty acid of the membrane lipid.
Determination of proline
Ninhydrin was used to produce prolin’s reaction which was used to estimate proline following the method of Bates et al. (1973).
Extraction and measurement of ascorbate and glutathione
Half gram of fresh onion leaves were homogenized in 3 ml extraction buffer containing 5% meta-phosphoric acid and 1 mM EDTA. Homogenates were centrifuged at 11,500×g for 15 min by 4°C, and the supernatant was used in analysis of ascorbate and glutathione. Method of Huang et al. (2005) was used to measure ascorbate while Yu et al. (2003) was used to assay for glutathione pool.
Determination of protein
Content of protein was determined according to Bradford (1976) where, BSA was used as standard.
Enzyme extraction and assays
Half gram of leaf tissue was homogenized in 1 ml of 50 mM K-phosphate buffer (pH 7.0), which contains 100 mM KCl, 1 mM ascorbate, 5 mM β-mercaptoethanol and 10% (w/v) glycerol. The homogenates were centrifuged at 11,500×g for 10 min, and the supernatants were used for determination of enzyme activity. All process was carried out below 4°C.
Diamine oxidase (DAO, EC: 1.4.3.6) and polyamine oxidae (PAO, EC: 1.5.3.11) activities were measured by the method of Gao et  al. (2005), with few modifications. Fresh samples of onion leaves were homogenized in 100 mM phosphate buffer (pH 6.5) and the homogenate was centrifuged for 20 min at 4°C by 10,000×g. The supernatant was used for enzyme assay. The reaction mixture contained 2.5 ml of phosphate buffer (100 mM, pH 6.5), 0.2 ml of 4-aminoantipyrine/N,N-dimethylaniline reaction solution, 0.1 ml of horseradish peroxidase (250 Uml-1), and 0.2 ml of the enzyme extract. The reaction was initiated by addition of 0.1 ml Putrescine final concentration of 20 mM) for DAO determination and 0.1 ml Spd (final concentration of 20 mM) for PAO determination. The change of absorbance at 550 nm per minute by 0.001 was considered as, one unit enzyme activity.
Superoxide dismutase (SOD, EC 1.15.1.1) activity was assayed according to Spitz and Oberley (1989) based on the competition between SOD and an indicator molecule NBT for superoxide production from xanthine and xanthine oxidase. Activity of one unit was defined as, the amount of protein required to inhibit NBT reduction by 50%. The Catalase (CAT, EC: 1.11.1.6) activity was assayed by Csiszár et al. (2011) while extinction coefficient of 39.4 M−1cm−1 was used to compute the activity.
Ascorbate peroxidase (APX, EC: 1.11.1.11) activity was computed by Nakano and Asada (1981) while Glutathione peroxidase (GPX, EC: 1.11.1.9) activity was calculated by Elia et al. (2003). The activities of glutathione (GR, EC: 1.6.4.2) and monodehydroascorbate reductase (MDHAR, EC: 1.6.5.4) were assyed according to the methods of Hossain and Fujita (2010). In case of assay activity of dehydroascorbate reductase (DHAR, EC: 1.8.5.1), method of Nakano and Asada (1981) was monitored.
Statistical analysis
Data were analyzed by statistical software SAS (9.1 version) and the means were separated by Tukey’s tests following randomized complete block design (RCBD). Value presented in table and figures are, mean of three independent experiments (each experiment consists of three replications). Probability level at P≤0.05 was considered as significant.

Changes in relative water content (RWC) and proline
The salinity reduced the leaf RWC gradually with stress duration, and at 5 and 7 days, RWC was significantly lower in the stressed seedlings than control (Figure 1A). Foliar application of Spd reduced the loss of water and restored the RWC in salinity stress seedlings by 7, 15, 14 and 14 % at 1, 3, 5 and 7 days, respectively. On the other hand, salinity stress significantly increased the proline content in onion seedlings (Figure 1B). 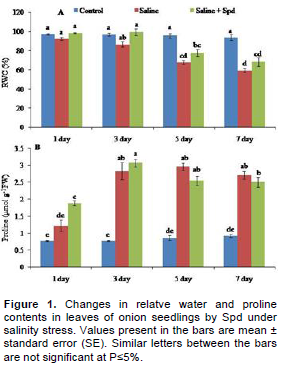 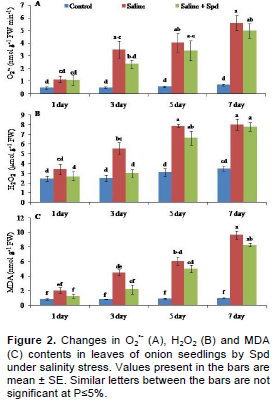 Spd treatment also reduced the H2O2 content in onion seedlings over the content in the seedlings under salinity without Spd by 21, 46, 16 and 28% at 1, 3, 5 and 7 days, respectively. Lipid peroxidation was measured as MDA which sharply increased in onion leaves by salinity stress (Figure 2C). As compared to respective control, the content of MDA was 1.5, 4.5, 5.7 and 8.8 fold higher at 1, 3, 5 and 7 days, respectively. The Spd treatment reduced the content by 39, 51, 18 and 14% at 1, 3, 5 and 7 days of salinity stress, respectively, when calculated over salinity stress without Spd.
Changes in polyamine related enzymes
Under  saline  stress,  the  activity  of  polyamine  oxidase (PAO) increased slightly up to 3 days and decreased afterward (Figure 3A). On the other hand, the activity of diamine oxidase (DAO) increased by saline stress where maximum (47% over control), increment was observed at 3 days of stress (Figure 3B). Spd increased both activities over salinity. However, both of the activities were the highest at 3 days of stress. 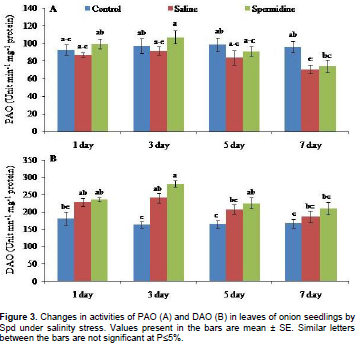 Changes in antioxidant enzymes
The activity of superoxide dismutase (SOD) increased under saline stress (Figure 4A). However, after 5 day of stress, it decreased. The increments of the activity under salinity over control were 20, 22, 47 and 25% at 1, 3, 5 and 7 days, respectively. Application of Spd in saline stressed seedlings further increased the activity over salinity by 10, 21, 20 and 25% at 1, 3, 5 and 7 days, respectively. However, CAT activity was almost similar in the seedlings both under salinity with or without Spd (Figure 4B). 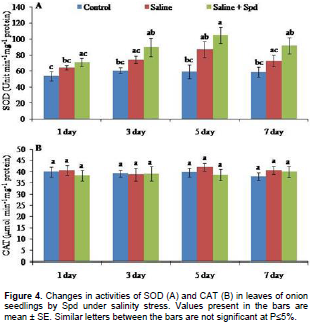 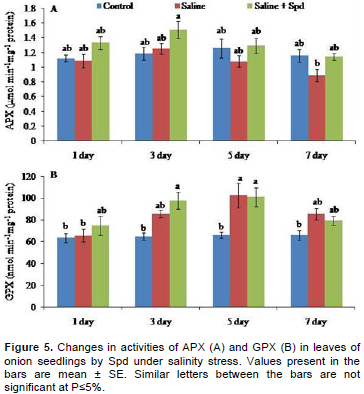 The important enzymes, MDHAR, DHAR and GR of ASA-GSH cycle were also measured which maintain ASA and GSH. In this study, saline stress decreased MDHAR activity with duration, though, significant variation was not found between the activities under control and salinity (Figure 6A). Notably, application of Spd increased the activity over salinity, where increase was higher by 6, 19, 22 and 21% at 1, 3, 5 and 7 days, respectively. In contrast, salinity increased the DHAR activity over control. In application of Spd, the activity was found to increase stressed seedlings up to 3 days of stress (Figure 6B). 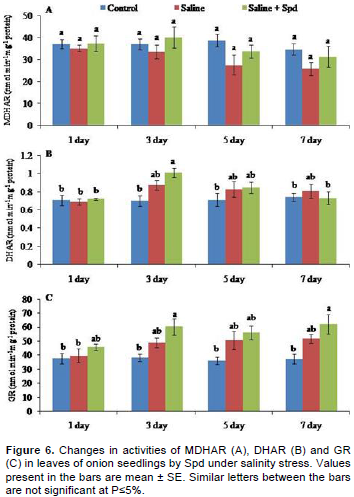 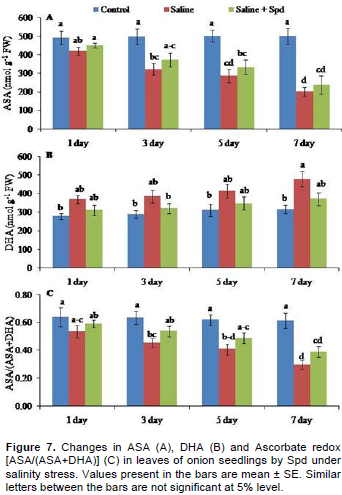 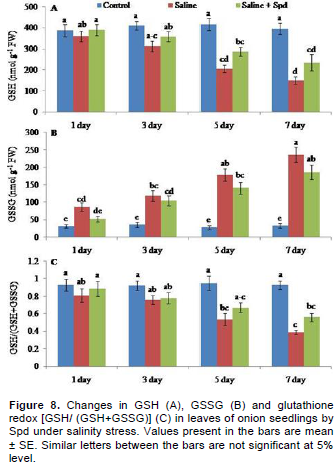 Considering the above results, saline stress caused over production of ROS and MDA in onion seedlings. Application of foliar Spd reduced ROS and MDA through up-regulating activities of SOD, APX, GPX, MDHAR, DHAR and GR as well as maintaining ASA and GSH. Importantly, many of the enzymatic antioxidants showed higher activities at 3 to 5 days of stress.
However, the CAT activity remaind almost unchanged under salinity stress with or without Spd application. In this preliminary study, we used only one dose of Spd. Multiple dose can be examined for further study.