This study evaluated the presence of integument dormancy in Melanoxylon brauna seeds by testing the influence of nine pre-germination treatments on seed germination compared to a control (no pre-germination) treatment. Pre-germination treatments include; immersion in sulfuric acid for 5 min, 10 min, 15 min and 30 min, hot water at 80°C without soaking, hot water at 80°C with soaking for 30 min, 90 min, 24 h, and mechanical scarification. The experiment consisted of a completely randomized design, with four replicates and 25 seeds per experimental unit. Percentage germination, germination speed, number of normal and abnormal seedlings, and mortality rate were evaluated. Seeds began to germinate at four days, and germination varied from 33 to 89%, with the highest percentage found in hot water with or without soaking for 30 min, which not differed statiscally from control. Immersion in sulfuric acid for longer than 10 min reduced seed germination and increased mortality rate. We conclude that M. brauna seeds do not undergo seed dormancy, and there is no need to apply pre-germinating treatments to its seeds.

Melanoxylon brauna, popularly known as brauna, brauna-preta or garauna, is an arboreal species of the Leguminosae Family - Caesalpinoideae, endemic to Brazil and native to the Caatinga, Cerrado, and Atlantic Forest biomes. It occurs naturally in the states of Bahia, Goiás, Minas Gerais, Espírito Santo, Rio de Janeiro, São Paulo, and Paraná (Lorenzi, 2009; Carvalho,  2010).  The species has very heavy and compact wood suitable for external and hydraulic works, fence posts and civil construction (Carvalho, 2010). Due to intense extractive exploitation of its wood for use in construction, the species is currently categorized as vulnerable on the endangered species list (Martinelli and Moraes, 2013). It has  ornamental potential due to its intense yellow flowering and is thus used in landscaping projects and afforestation of squares/parks. It has symbiotic association with nitrogen-fixing bacteria (De Faria et al., 1984), however it is little used in environmental restoration projects due to the difficulty of obtaining its seeds and their slow growth during the seedling phase and in the field.
Understanding the main processes involved in germination is of vital importance for multiplying native species, considering that the seminal route is often the only form of propagating these species, as in the case of Brauna. Germination consists of a complex and orderly set of biochemical and physiological events which begin with water absorption by the seeds that activates metabolism culminating in the emergence of the embryonic axis (Labouriau, 1983). This process is influenced by several intrinsic and extrinsic factors which can act in isolation or in interaction with others.
Several species of the Leguminosae Family have waterproof seed coatings/integument, which causes physical or exogenous dormancy. This characteristic is determined by the presence of substances such as suberin, lignin, cutin and mucilage that can concentrate on different parts of the seeds such as its coating/integument, pericarp and nucellar membrane, which differ from one species to another (Mayer and Poljakoff-Mayber, 1982). The waterproof coating/integument can act in two ways on seed dormancy; inhibiting water absorption and preventing seed soaking, or by reducing oxygen availability to the embryo.
Dormancy is ecologically important for preventing germination when the environmental conditions for the species’ growth are not adequate by increasing the prospects of success for its establishment and survival. Under natural conditions, physical dormancy can be broken by scarification processes, animal ingestion, microorganism activity, natural soil acidity and by burning (Mayer and Poljakoff-Mayber, 1982).
Seeking methodologies for analyzing forest seeds has a fundamental role in scientific research and is of diverse interest. For Brauna, the effects of temperature, substrate and seed size on germination and vigor have already been investigated (Flores et al., 2014a, b). Large dark seeds put to germinate on a paper roll substrate in temperatures ranging between 30 to 35.8°C showed better performance. However, no studies have addressed the influence of pre-germination treatments on the germination of this species. The objective of this study was to verify the influence of different pre-germination methods on seed germination and vigor in Melanoxylon brauna.

The experiment was conducted at the Laboratory of Leguminous Forests, Embrapa Agrobiology, Seropédica, Rio de Janeiro. Melanoxylon brauna seeds used in the experiment were harvested in July, 2015 in Leopoldina, Minas Gerais and remained stored in a cold room at 5ºC for one year. Then the moisture content of the seeds was determined by the drying oven method at 105 ± 3°C for 24 h, adopting two replicates of 5 g of each seed, and then 1000-seed weight was also determined, consisting of weighing eight samples of 100 seeds (Brasil, 2009).
For the germination test, seed asepsis was first performed by immersion in 5% (v/v) sodium hypochlorite for 10 min, followed by rinsing under running water. The treatments used to break dormancy were:
Chemical scarification
The seeds were immersed in sulfuric acid with 98% concentration for 5 min (T1), 10 min (T2), 15 min (T3) and 30 min (T4), and then rinsed in running water.
Thermal shock
The seeds were immersed in water at 80°C without soaking (T5), and with soaking for 30 min (T6), 90 min (T7) and 24 h (T8).
Mechanical scarification (T9)
The region opposite to the axis of the embryo was manually rubbed using sandpaper  P150, until a slight change of color was obtained in that area of the coating/integument.
Control (T10)
Intact seeds without any treatments
A germitest paper roll was used as substrate, with three papers per repetition, moistened with distilled water 2.5 times its weight (47.5 ml per roll). The rolls were placed in transparent polyethylene plastic bags with dimensions of 40 cm x 60 cm with 0.033 mm thickness, which were then well tied with crochet thread to avoid drying out. The rolls of paper with plastic were kept upright in a BOD germinating chamber at a temperature of 25ºC, and a photoperiod of 12 h. The experimental design was completely randomized with four replicates and 25 seeds per experimental unit.
Counts were carried out daily in the first week until the first germinated seeds were observed. The evaluations were weekly from the second week on with the following characteristics evaluated: percentage of normal and abnormal seedlings, percentage of hard or non-germinated seeds and dead seeds. Germinated seeds were considered those whose radicles were equal to or greater than 2 mm. Also, the Speed Germination Rate (SGR) was calculated according to the formula proposed by Maguire (1962).
The experiment lasted 25 days, when all treatments presented a stabilized germination percentage. The data of the evaluated variables were subjected to analysis of variance (ANOVA) and the means that originated from the treatments were compared by the Scott-knott test, at 5% probability. There was a need for transformation in arc sin sen ) of the normal seedlings variable values because they did not present a normal distribution or homogeneity of residue variance, which are necessary assumptions to perform ANOVA. Non-parametric Kruskal Wallis test was used for the variable percentage of abnormal seedlings, as the residues did not fit such assumptions even after transformation. Analyzes were performed with the help of SAEG 9.1 (SAEG, 2007), SISVAR (Ferreira, 2011) and R (The R Project for Statistical Computing, version 3.3.2.) software programs.

The seeds began to germinate on the fourth day of the experiment for all treatments. All treatments reached a germination percentage greater than 50% at 6 days, except for immersion in sulfuric acid for 30 min (T6), which  reached 32% persisting throughout the experiment period (Figure 1). 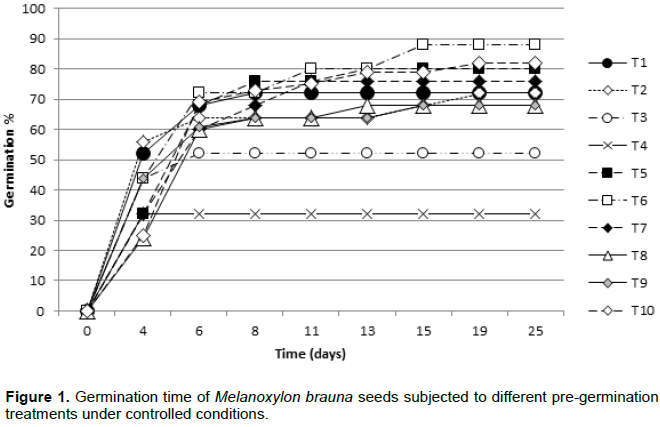 In general, the mortality of Brauna seeds was quite high, varying from 11% to 67%. The lowest value was found for T6 (seeds soaked in hot water 80°C by 30 min), not differing significantly from control (T10) and hot water without soaking (T5).
A high incidence of fungi in the seeds was observed and may have contributed to its high mortality, especially when combined with treatments that caused seed damage. Although fungal attack causes an increase in mortality, its presence is a factor that can positively influence the germination process, since it leads to deterioration of the coating/integument. It was not measured in this experiment, but have already been observed between Alternaria, Aspergillus fungi and Astragalus utahensis seed (Long et al., 2012; Eldredge et al., 2016) and between corn  and  Fusarium  subglutinans (Rheeder et al., 1990).
Immersion in sulfuric acid for longer than 10 min impaired germination and increased seed mortality. Although, chemical scarification leads to integument/coating degradation allowing water to enter. Excessive immersion/soaking can cause the breakdown of essential cells, thereby inducing mechanical damage and fungi invasion, which in turn hinder the emergence of seedlings (Rolston, 1978).
Immersion in hot water for 24 h also impaired Brauna seed germination, reducing speed germination rate and increasing mortality. Excess water can impair the germination process by promoting pathogenic microorganism proliferation, restricting oxygen entry and absorption. When set to soak for an extended period, the seeds may suffer irreversible damage to the membrane system, and consequent leaching of cellular contents that negatively affects germination. Similar to Brauna, Parkia pendula seeds do not seem to tolerate long periods of soaking, and a reduction in germinability and percentages of normal seedlings can be observed when soaked for 24 h after the heat treatment (Pinedo and Ferraz, 2008). These authors found that a soaking greater than 20% of their mass after about 4h significantly reduced the emergence of seedlings. This reduction was observed in Parkia multijuga when soaking seeds exceeded 45.4% in water content (Calvi et al., 2008).
Variable results in relation to the same chemical treatments in different plant species can be observed due to the germination peculiarities of  each  species  and  the characteristics of each integument/coating. Colubrina glandulosa Perk germinated well with sulfuric acid for 30 to 90 min, however germination losses were observed for 120 and 150 min (Brancalion et al., 2010).  Libidibia ferrea (Mart. ex Tul.) LP Queiroz) had good results with sulfuric acid for 20 and 40 min (Matos et al., 2015). Samanea tubulosa (Benth.) Barneby & JW Grimes germinated with sulfuric acid for 5 and 10 min (Muniz Giachini et al., 2010). Parkia panurensis e P. velutina had a good performance with immersion in sulfuric acid for 30 min (Melo et al., 2011). Enterolobium contortisiliquum (Vell.) Morong germinated with immersion in sulfuric acid for 30 to 50 min without significant difference between immersion/soaking periods (Lozano et al., 2016). Gledistchia amorphoides Taub seeds subjected to chemical scarification for 1 or 2 h had germination increased by 70% and anticipated in 15 days (Bortolini et al., 2011).
Although mechanical scarification has been indicated as a good method to overcome seed dormancy in many Leguminosae species (Guedes et al., 2011; Dayrell et al., 2015), in this study it caused a decrease in brauna speed germination rate and percentage. Based on the results, it can be assumed that the seeds of Brauna do not have seed dormancy.

Treatments with seed immersion in 80°C hot water with or without soaking for 30 minutes show the highest germination, speed germination rate and lowest mortality values. These treatments are not statistically different from each other or the control group, concluding that brauna seeds do not undergo physical dormancy and do not require pre-germination treatments.